Such a terrier is said to have killed 80 rats in one day while threshing! In the past, there were even professional “pied pipers” who traveled the country with a whole pack of such terriers and offered their services on the farms for money. These small dogs had a good reputation as very efficient rat and mouse killers.

East Anglia has always been a grain country and at the same time an Eldorado for mice and rats, who compete with people for the grain. To combat the harmful small rodents, small terrier-like, mostly red-brown dogs have been used for a long time, which made sure that the rodents did not get the upper hand in the house and yard – the Norwich Terrier.

Today’s Norwich Terrier is a small-spirited dog that is not prone to hunting and poaching and allows you to walk it off-leash. They are sensitive terriers that need intimate contact with their caregiver and are very fixated on them. They delight with their goblin-like, witty and clever nature paired with a lovable, boundlessly affectionate character. They are persistent and hardy enough to take part in long walks and hikes. 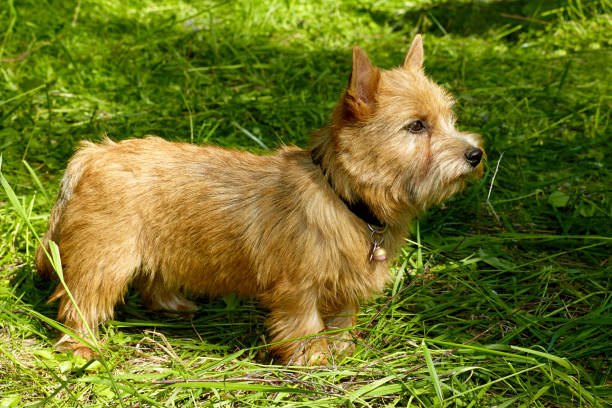 At 5-8 kg, he is one of the smallest terriers and at first, glance looks like a successful mixed breed in many shades of red and the “black and tan” color. Due to the dirt-repellent hard fur, caring for the Norwich Terrier is very easy, but it should be professionally trimmed (not cut) 2-3 times a year so that it’s harsh, dirt-repellent hair is preserved and, to the delight of the housewife, it does not shed.

Even die-hard big dog owners are often happy with a Norwich as they are quite literally a big dog in a small package. He is not a dog for loud and bossy people… they need a firm but friendly hand and they usually get along very well with children and fellow dogs.

Because these dogs were bred to hunt in packs, they get along very well with other dogs and are social with them. Since both breeds are very similar, with the exception of the ears, the question inevitably arises: “Now what is Norwich, what is Norfolk?”. The Norwich Terrier has ears that look like a witch hat, while the Norfolk Terrier has ears that fold forward

The compact Norwich Terrier is confident but not belligerent, due to being a pack dog used to the constant company of other dogs from an early age. He is lively and mostly cheerful. The Norwich Terrier is particularly suitable for families with children, as they are affectionate, lovable, teachable, and extremely patient with children. In the house, these dogs behave very pleasantly, but they are also attentive and very hardy guards. As dogs were originally bred for hunting purposes, the tough terriers naturally need ample opportunity to let off steam outside. They are loyal and easygoing, but also quite headstrong at times.

At first, the little reds were owned by gypsies and itinerant tradesmen, later they became widespread and useful on the farms of East Anglia. Around 1870, the Master of Foxhounds from Ballybrick in Ireland bred a particularly small IrishTerrier line (Irish mites), which should also follow the foxes in their structure and therefore had a shoulder height of approx. 25 cm.

After his death, some of these “Irish mites” made their way to England near Norfolk and Cambridge. It is very likely that these Irish mites and the little mice and pied pipers of East Anglia were the direct ancestors of the Norwich Terriers.

Towards the end of the 19th century, the small red terriers began to appear in Cambridge, where they were sold to students on Trumpington Street, not far from the college, by a dog dealer named “Doggie Lawrence”. They kept them as mascots and held rat-killing competitions with them. The small Cantab Terriers cost up to £25 at the time, which was an astronomical price for a dog at the time. 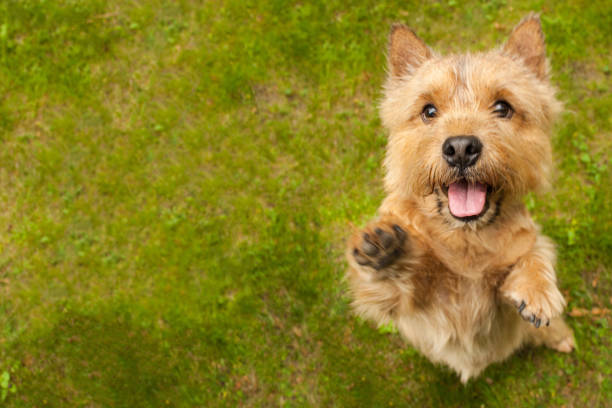 The first breeders of the little reds came mainly from the horse world. They bred to create a certain type of terrier. He should be short, rough-haired, and red. One of the most famous first breeders was probably “Roughrider Jones”.

Most of his puppies went to hunters and horse people and later even all over the world, mainly to the USA but also to the then King of Spain. Thanks to a few dedicated breeders, this breed has been preserved through both world wars and since 1964 a separate studbook has been kept for the dog breeds Norwich and Norfolk Terrier.

The Norwich Terrier was recognized as a separate breed in England and the United States in the 1930s, although both breeds were still legal at the time. Up until the 1960s, both variants were crossed with each other, but in 1965 the breed with the tipped ears was renamed the Norfolk Terrier.

In the United States, the AKC followed the example of the English Kennel Club in 1979 and recognized both breeds as separate breeds. The breed standard stipulates the desired height of 25 to 26 cm, the weight should be between 5 and 5.5 kg if possible.