Most dog owners have probably seen their dog tremble at some point. Dog tremors can have many different causes. Find out here which of them are harmless and when you should consult a veterinarian.

Tremors in dogs can be completely normal and are usually not a cause for concern. However, tremors can also be a symptom of serious illnesses. Therefore, monitor your dog’s tremors closely and check how often, for how long and at what times it trembles. If the tremors last for a particularly long time, are very frequent, or you find anything else unusual about them, you should definitely consult a veterinarian. These 10 reasons can trigger tremors in dogs: 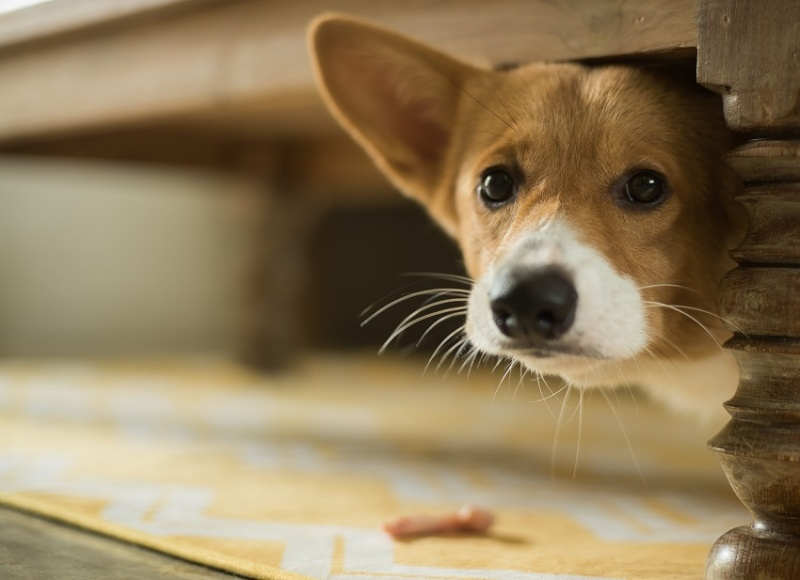 To some extent, shaking is part of the natural behavior of dogs and is normal in certain situations:

It’s not uncommon for dogs to tremble after a long walk or a riot. The muscles then relax after physical exertion and stress is relieved. However, the shaking should stop after a few minutes.

When they sleep, dogs process the experiences of the day and relieve tension and stress. This can lead to muscle spasms and tremors, especially during intense dreams, and is completely normal.

3. Trembling in response to cold

Another reason dogs tremble is cold. Like humans, dogs react to this by shaking. This is to control body temperature. Small dogs are often affected by trembling from the cold because they freeze very easily. Therefore, suitable dog clothing can definitely be useful in cold seasons.

Older dogs are more prone to muscle twitching and therefore tremble more often than young dogs. This is part of the signs of aging in dogs and is completely normal in most cases.

5. Emotional triggers for the tremor

Emotions can also trigger dogs to tremble. This includes joy as well as fear. If the dog feels happy, it expresses this by trembling in addition to other behaviors such as tail wagging. This releases positive tension.

Tremors of fear are common in dogs because the tremors also relieve tension, but in this case it is negative. Tremors of fear can be caused by a wide variety of situations, such as driving a car, loud noises, or other unexpected or unfamiliar situations such as meeting strangers or other dogs. If your dog is trembling out of fear, he usually shows it in other ways, for example by:

If your dog is scared, you should resolve the situation for him as soon as possible and remain calm.

If your dog is shaking for any of these reasons, don’t worry as long as the duration and frequency are within normal limits. As a rule, however, as a dog owner you will quickly notice when the trembling is harmless and when it is rather unusual. If you have a strange feeling, you should consult a vet as a precaution.

Trembling as a symptom of the disease

Unfortunately, in some cases, shaking in dogs is not so harmless, because it can also be a symptom of serious illnesses.

The “White Dog Shaker Phenomenon” is an inherited condition that primarily affects white dogs. This disease causes the dog to tremble all over and lose orientation. Rapid eye movements are also noticeable.

8. Trembling as a symptom of gastric torsion

Torsion of the stomach can be fatal to dogs if not recognized and treated. The tremors are caused by the dog’s pain and shock. Tremors are particularly a sign of torsion when accompanied by one or more of these symptoms:

Distemper is a rare but life-threatening viral disease that attacks the brain, nervous system, gastrointestinal and respiratory tracts of dogs. Vaccination, on the other hand, is part of the standard program for dogs. In addition to the tremor, other symptoms include:

When dogs eat foods or plants that are toxic to them, it can lead to life-threatening poisoning. Trembling is one of many symptoms. Other signs of poisoning are:

Other causes of tremors can be kidney failure and brain disorders such as stroke or heat stroke. In addition, pain, in general, can also be expressed by tremors.

The following applies: If your dog’s shaking seems unusual or if it is accompanied by other symptoms such as vomiting, diarrhoea, apathy or convulsions, you should urgently consult a veterinarian!

If a dog is shaking when breathing, it definitely needs to be checked out by a veterinarian. Reasons for this can be, for example, respiratory problems or pain in the chest.

Dog trembles at the mouth

When dogs chatter their teeth, i.e. their mouths tremble, there can be various reasons. On the one hand, the dog uses it to pick up smells. This often happens, especially in the context of mating behavior, when males are looking for a female or have scented a bitch in heat. On the other hand, dogs also chatter their teeth when they are nervous or cold.

Chattering teeth can also be a sign of illness. Here, too, it is important to observe the dog’s behavior closely and to consult a veterinarian if accompanying symptoms occur or the dog is generally behaving strangely.

Already knew? Some dog breeds are naturally more prone to shaking than others. Hunting dogs, for example, are more likely to tremble because their hunting instincts often create tension that the trembling is intended to relieve. However, unusual tremors should never be dismissed by this natural disposition, but should always be taken seriously.