The Australian Cattle Dog is a unique breed. Not only is she known for her working skills, but she is also one of the ten smartest dogs in the world. 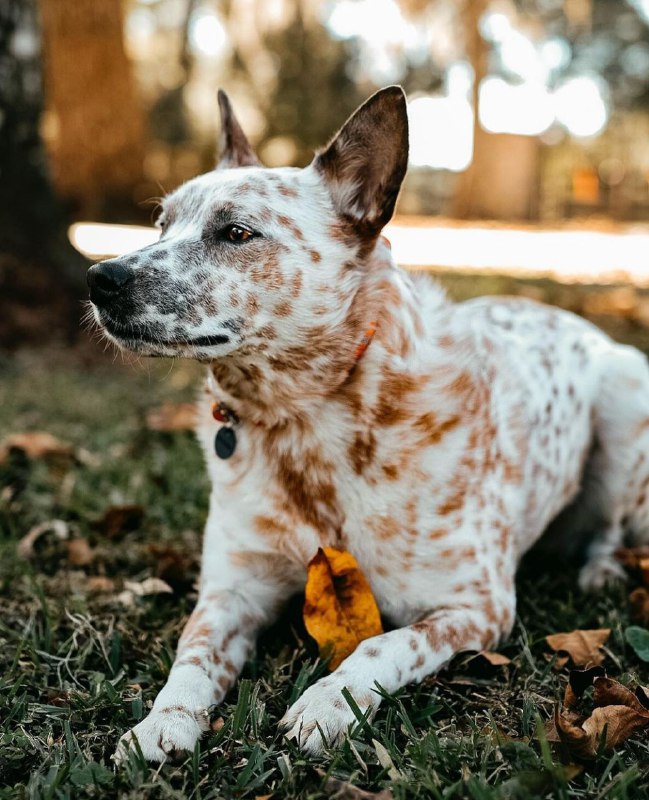 The Australian Heeler breed was bred in Australia, as the name implies, during the period of the settlement of these areas by the British. People needed a strong, hardy, and intelligent dog with a large, muscular physique, which could endure all adversity in a new place and serve as a reliable support in various endeavors. And beginnings, as you yourself understand, were many.
These dogs are called differently – Australian Heeler, Queensland Heeler (due to the huge popularity among farmers in the Queensland region of Australia), Blue Heeler, or Halls Heeler. Officially, however, he is an Australian herding dog (for cattle). And the nickname “Heeler” comes from the fact that dogs were raised in a herd of cattle, and they grazed the cattle by biting their lower legs.
The Australian Heeler today is the result of many years of selection and crossbreeding, which began in 1893, and already in 1897, Robert Kaleski showed the first results of his labors to the public. Robert Kaleski developed the first standard based on native dingoes, rightly believing that these animals would naturally fit into the Australian wild.
Moreover, the dogs that the first settlers from England (for example, terriers) took with them were poorly suited for the climate and semi-wild life in Australia, and all of them were subsequently crossed and improved in order to obtain more perfect breeds.
The Australian Heeler today is very similar to a dingo dog, although it has a different coat color. It has been eligible to be shown in the Working Group since September 1980. The breed entered the herding group in January 1983. The New South Wales Kennel Club gave its approval for the breed standard in 1903. 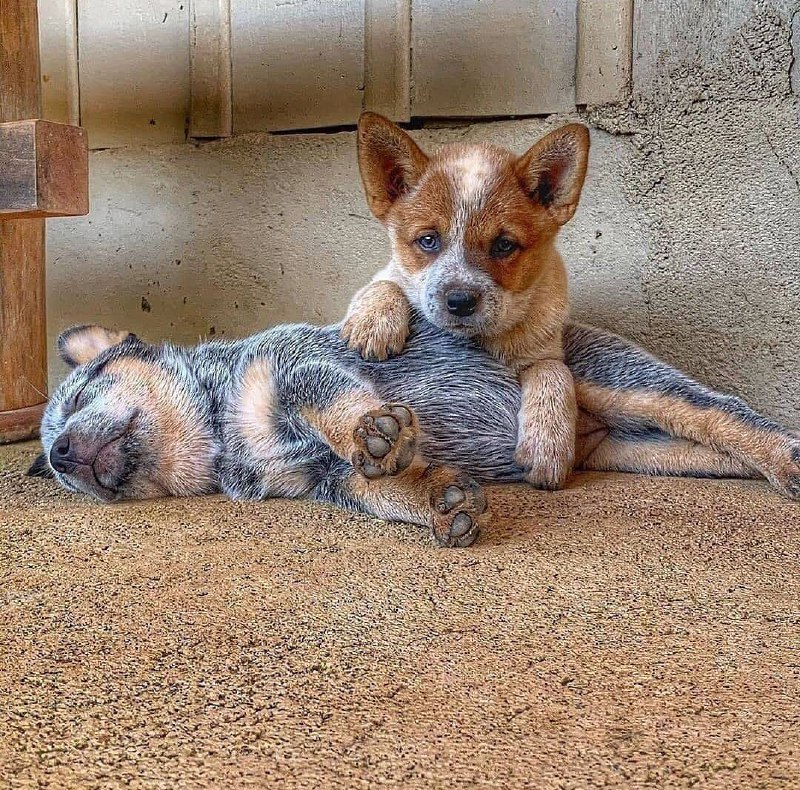 These are large dogs, with a broad, powerful chest and muscular build. The muzzle is square, the ears are erect. The limbs are of medium length, proportional and muscular, the tail is medium, the coat is long. The color can be blue, blue with black or brown spots. 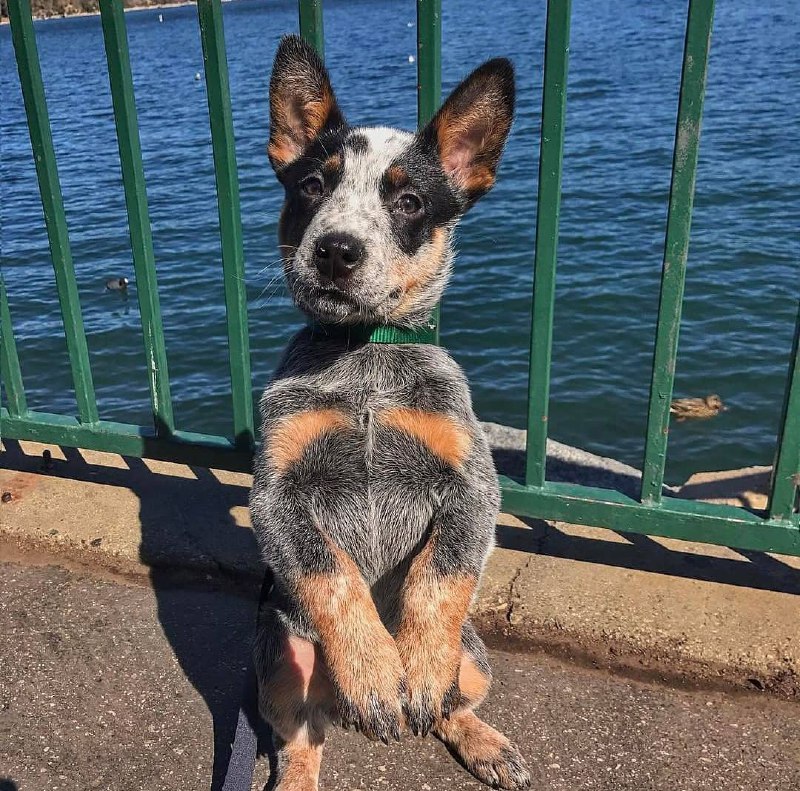 The Australian Heeler breed has a somewhat stubborn, independent, but at the same time very open and friendly character for the owners. These are very intelligent dogs who always draw their own conclusions, understand the person perfectly, and are distinguished by excellent resourcefulness. In addition, they are extremely hardy and can live in a wide variety of climates and in general in a wide variety of conditions, without experiencing any internal discomfort.
Endurance is also reflected in the attitude towards pain – initially, dogs were trained and bred in such a way that they could perform assigned tasks even despite physical injuries, bites, bruises, etc.
The Australian Hillier developed in close contact with humans, and to this day the breed retains this important quality. The dog is extremely attached to its owner and is ready to follow him anywhere, even to the end of the world, and it does not matter where this edge will be – at the North Pole or in the hot deserts of Africa. The dog will survive everywhere and will help the owner to survive.
Naturally, hunting instincts are also extremely strong, and all small animals, including small dogs, cats, squirrels, any rodents, are potential prey. However, they can be trained to live with a cat if you do this from an early age, but keep in mind that all other cats, except for friendly, domestic ones, will still remain the prey. But hamsters, guinea pigs, parrots – here you don’t even have to try, since Healer, in principle, cannot perceive them other than as prey.
The Australian Shepherd Dog perfectly copes with the functions of a watchdog, and responsibly, selflessly protects its territory from any encroachments, whether it be a man or a stray dog. It is the same with host protection. The Australian Healer has a very high energy level, and does not understand how it is possible to spend the whole day lying on the couch – and even if he had to do that, he would definitely not like it.
But, if you need to go on a hike, overcoming tens of kilometers of the way, or perform any assigned work, helping the owner in everything, in this case, the dog will be happy. Idleness, lack of activity, and useful functions cause melancholy and sadness in this breed, because of which the character can become destructive. Then, the first thing that gets hurt is your furniture, doorframes, curtains, shoes, etc.
Children are perceived well, but they feel responsible for them, as for a herd, because this is a herding dog, and therefore sometimes they can try to drive them into the nursery, and even bite lightly on the heels. But you can wean you from this. By the way, the instinct to bite is generally quite strong in these dogs, and therefore you should always have toys since it is extremely important to direct this instinct in the right direction because it makes no sense to wean a dog from such a thing. Most likely, you simply will not succeed, since for an animal it is as natural as walking, running, etc.
Strangers are perceived neutrally if they are not territorial trespassers or are not aggressive towards the dog or owners. By the way, if you live in the private sector, it is better to have a fence with a concrete foundation, since the healer may well make a tunnel and go on a short trip. Moreover, it will also be possible to find it at the nearest trash can – the desire to dig in the garbage, independently get food and travel is inherent in these dogs. 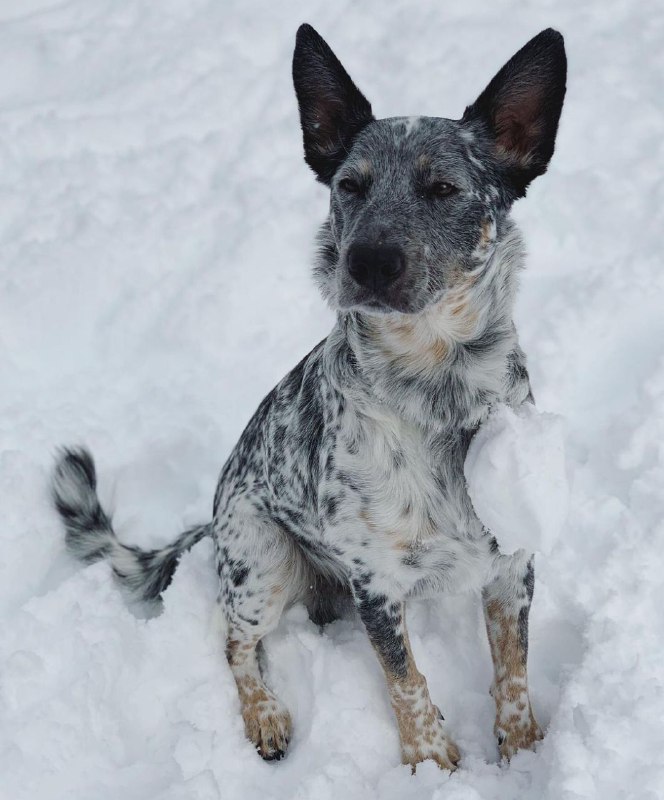 Stubbornness and a desire to act in its own way is a distinctive feature of the breed, although it is quite possible to work with it. If the dog recognizes you as a leader, loves you, he will obey. Accordingly, you need to first of all put yourself in the role of a leader, as well as teach the animal basic commands and achieve their strict implementation, even in the presence of distractions. Moreover, in this case, the distracting factors can be not only extraneous sounds and smells but also simply – a sunny day in which the dog wants to plunge with all the ensuing adventures.
You need to train consistently, actively, variedly, and be patient, kind, very positive and, when necessary, a strict master. If the dog is guilty, he does not receive a toy. And if he does receive, a tasty treat or a toy, then only after he executes a command, for example, “sit” or “lie down.” 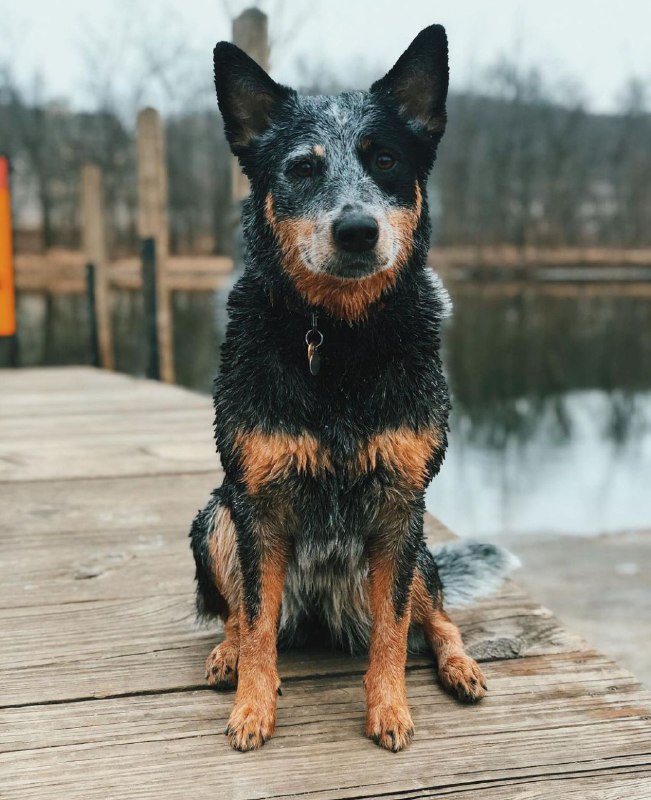 An Australian healer dog needs to be brushed about twice a week. No hair clipping required. You need to bathe your pet once a week or more often. The ears should be cleaned two to three times a week, the eyes daily, or as needed. The nails are trimmed three times a month. 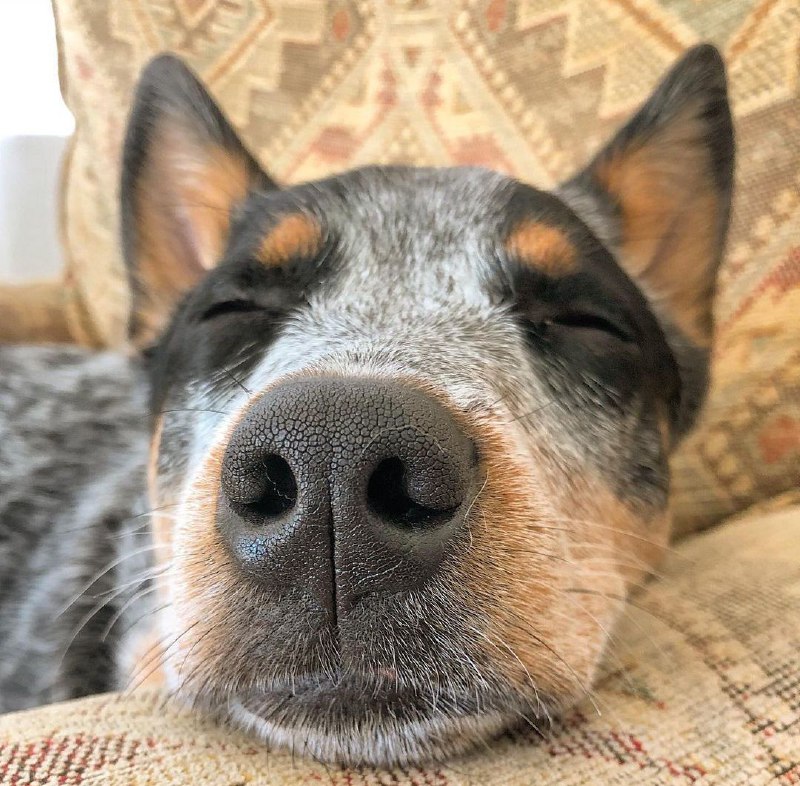 The Australian healer is susceptible to several diseases, although generally in very good condition.