Her deep black, shiny short hair is reminiscent of patent leather, her eyes are reminiscent of copper pennies: the Bombay cat is visually reminiscent of a mini panther and combines the physique of a predator with the features of a domestic cat. She is characterized by her high attachment and willingness to learn and feels comfortable in a family household with children and other pets. In short: a lovable housemate who is happy about a lot of attention.

Her character is as unmistakable as her appearance and her smooth gait: The Bombay combines the robustness and balance of the American Shorthair with the playful curiosity of the Burmese cat and stands out with her high intelligence. Due to its strong human connection, its exceptional ability to walk on a leash, and its joy of retrieving, it is also affectionately referred to as a “dog cat”. She seeks closeness to people and has a very affectionate nature.

Keeping and caring for the Bombay cat

A Bombay requires a lot of attention and doesn’t like to be alone. Lovable, cuddly, and sociable, she feels at home in households with children and dogs. You encourage her willingness to learn by constantly teaching her new things. For example, you can get her used to a leash and take her for a walk; she also enjoys retrieving. If you keep a Bombay cat indoors only, they will need plenty of opportunities to climb and play.

The close-lying, very short, and glossy coat of a Bombay requires little maintenance. However, because cats of this breed need a lot of affection, they appreciate brushing as an extra touch. A soft leather cloth is also suitable for preserving the shine of the fur. You use this as a brush by gently stroking the short hair in the direction of growth.

Colors of the Bombay Cat

Since the gene pool of the homozygous Bombay is very small, one of the two original breeds is crossed in every third generation. Although the breed standard prescribes a black color of the coat, such cross-crosses can lead to dark brown hues due to recessive genes.

Do you want a clingy, lovable cat that looks like a miniature panther? With this goal in mind, Nikki Horner bred a new breed of cat called Bombay in 1953 in the American state of Kentucky. In order to make her dream come true, she crossed the American Shorthair with the Burmese in a selective process lasting many years. A decade later, their new breed was officially recognized by the Cat Fanciers’ Association (CFA); since 1979 she has also been registered with the International Cat Association (TICA). In Europe, Bombay is one of the rarest cats, as there are very few European breeders.

Peculiarities of the Bombay cat 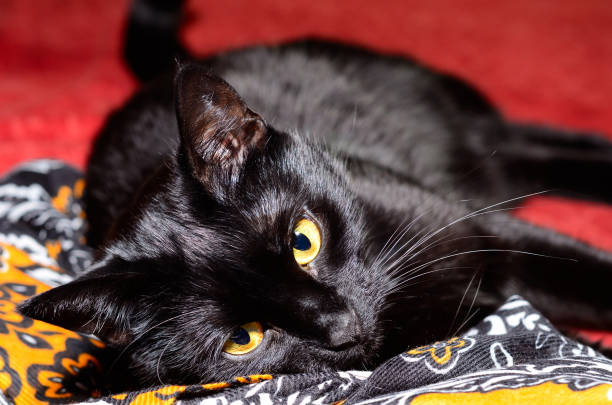 Due to Bombay’s robust nature, their life expectancy is up to 19 years. If your heart beats for this lovable cat breed, please make sure you choose a reputable breeder who is affiliated with a registered cat club. The Bombay is very rare, but at first glance, it can hardly be distinguished from a black domestic cat. A reputable breeder will document the pedigree for you and give the kittens at 12 weeks at the earliest.