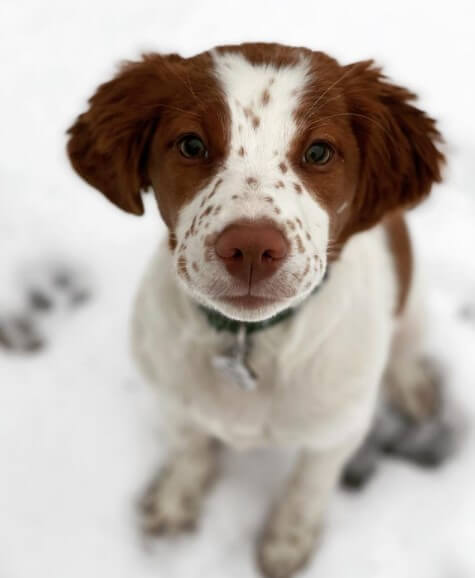 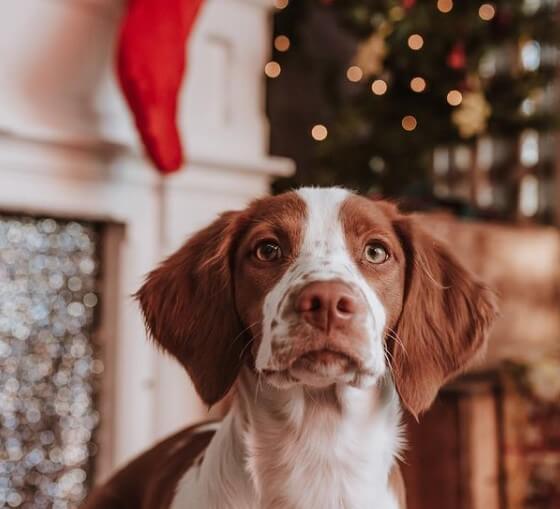 Brittany Spaniel is a French breed, although unknowingly some people identify them as English, as the name is consonant with the word Britannia. In fact, the breed got its name from the name of one of the regions in the north-west of France.

The first evidence of the existence of the Brittany Spaniel breed in France dates back to the 17th century – the artists depicted hunting with these dogs. Hunting is the main specialization of this breed and these dogs for several hundred years. Historically, for other purposes, they were practically not used (except as a companion), simply because it is ineffective to use a specialized hunting dog in a different capacity.

Moreover, the nobility hunted with this breed, and aristocrats, as we understand, rarely had problems with keeping several dogs or even a whole pack of dogs. Moreover, all performed certain functions, and it rarely happened that a sleek, hunting noble dog sat on a chain and sadly guarded his bowl, along with the castle gates.

That is how Reverend Davis described them as hunting and very valuable dogs. He indicated that the nobility hunted with small, cheerful, and playful dogs, which showed excellent results in finding and pointing out the downed game while being Retrievers. There are opinions that the English Setter participated in the formation of the breed, although there is no exact confirmation of this fact. However, according to other sources, Spaniel also participated in this process.

The breed has existed for several centuries as a separate breed, and these dogs were bred with a clear understanding of the preservation of characteristics, however, they received official status only in 1907. Also, in 1907 the first written breed standard appeared. The first registered dog was a red & white male named Boy. 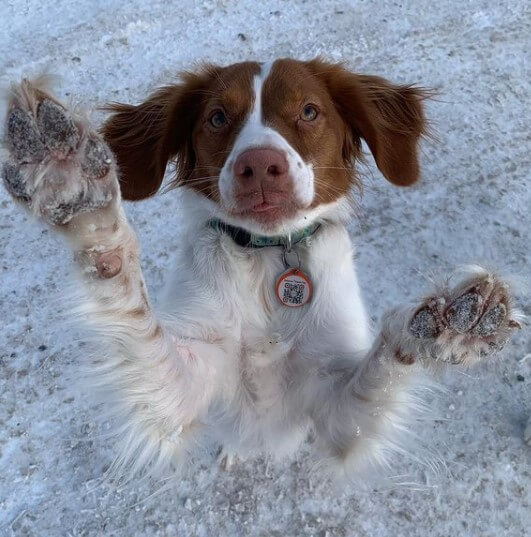 These are small dogs with a strong constitution, medium limbs, and ears hanging on the sides of the head. The head is round, the skull is of medium length, the muzzle is rather sharp, with a large, brown, or pink nose. The tail is short, the hair is short. Red & white, brown & white, liver & white, black & white, tricolor (white, red and black). 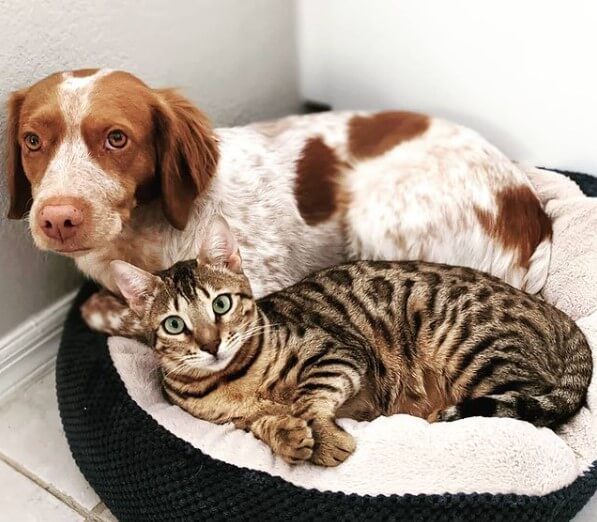 Brittany Spaniel dog breed is very affectionate and loving animals. It would seem that this is a hunting dog, which carries primitive instincts, which is why it is capable of being ruthless in relation to its prey. But, in fact, these qualities are manifested only in the process of hunting, and in the circle of his beloved people, and indeed in ordinary life, this is an incredibly harmonious creature.

They are always happy to help the owner, open and cheerful. Kindness, affection, responsiveness – all these qualities are inherent in every dog, without exception. However, there is one subtle point. These animals can be very shy by nature, and in order to get rid of such a character trait, they need to socialize in the right way. To do this, you need to go with your dog to visit, introduce him to other people, adults and children, acquaint him with other animals, not only with dogs but preferably with cats. This is all the more necessary if you plan to have a cat at home in the future.

Your dog should broaden his horizons as much as possible due to new acquaintances, sounds, smells, and situations that cannot be artificially created only at home. By the way, these pets have never been used and are not used in the modern world as watchdogs, precisely because of their good nature and love for people. This is a very adaptive breed, it can live quietly both in the private sector and in a city apartment, even if the apartment is small.

However, what should be considered is the high energy level of the animals. They need to realize their energetic potential through daily walks, games, and exercise. At least an hour a day, and if possible, even more, is a prerequisite. If you cannot provide the animal with such a level of physical activity, it is better to choose another breed, otherwise, you will simply make the dog unhappy. She will develop hyperactivity, she may excessively try to get your attention, and she may become very sensitive emotionally. In terms of parenting, problems almost never arise.

The Brittany Spaniel breed is great for children, and will always become a good friend and an interesting partner for a child to play and just for everyday activities. However, since these dogs are very kind and patient, and also small in size, the child must learn how to properly handle the animal.

The breed has excellent natural hunter instincts that you can use if you are into hunting. In addition, these are very smart pets, they understand not only words and hints, including behavioral ones, but, thanks to their sensitivity, they perfectly recognize the emotional state of the owners. 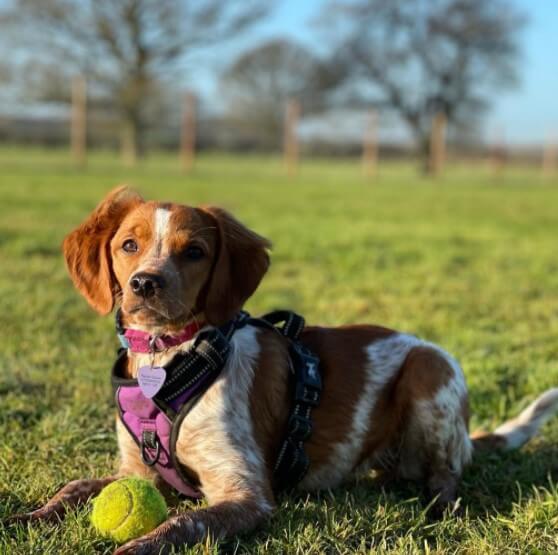 Brittany Spaniels are highly trainable and suitable for inexperienced dog breeders. The animal matures very early. At the age of eight months, you can start your studies. In this regard, from the very first days of birth or acquisition, they need to be taught simple commands. It is important to remember that representatives of this breed are emotional and require an individual approach. 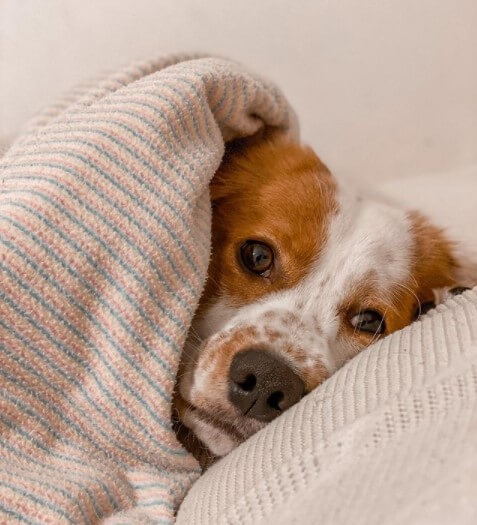 A Brittany Spaniel dog needs weekly brushing and weekly bathing (this is the minimum). Alternatively, you can do this after walking in the park or outdoors, paying special attention to your ears. Hanging ears often retain moisture in the ear canal and must be cleaned regularly, in addition, the dog often collects various litter, fallen leaves, etc. with its ears. Eyes are cleaned daily or as needed, claws are clipped 3 times a month. 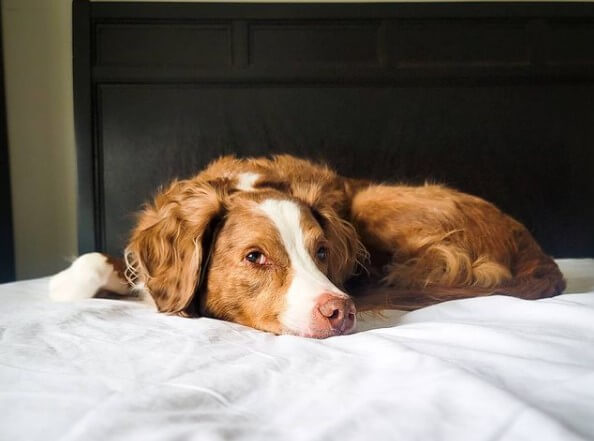 The Brittany Spaniel is a sturdy dog ​​that has almost no health problems. On the other hand, his ears need to be monitored because of the presence of foreign bodies irritates him and can cause infections. Brittany Spaniel can live up to 14 years in very good health. When choosing Brittany Spaniel puppies, it is extremely important to require documentary evidence of good health, harmonious anatomical build, and breed purity. It is equally important to learn about the parents of the puppies, about their physical and mental health. One of the parents should have a short tail by nature.