The Brussels Griffon seemed to have left the pages of fairy tales about kind brownies! This adorable and slightly awkward bearded man will easily win the love of all family members. 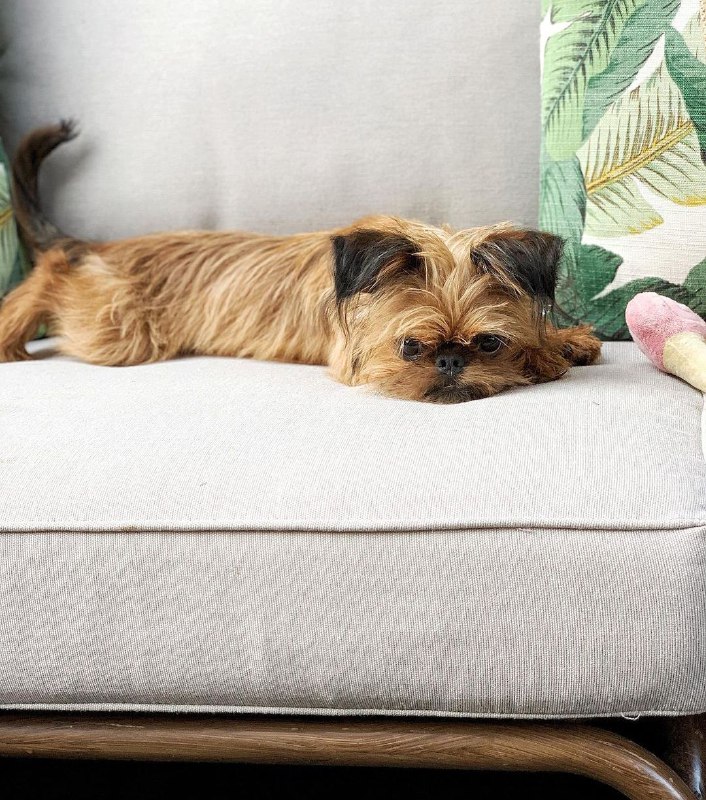 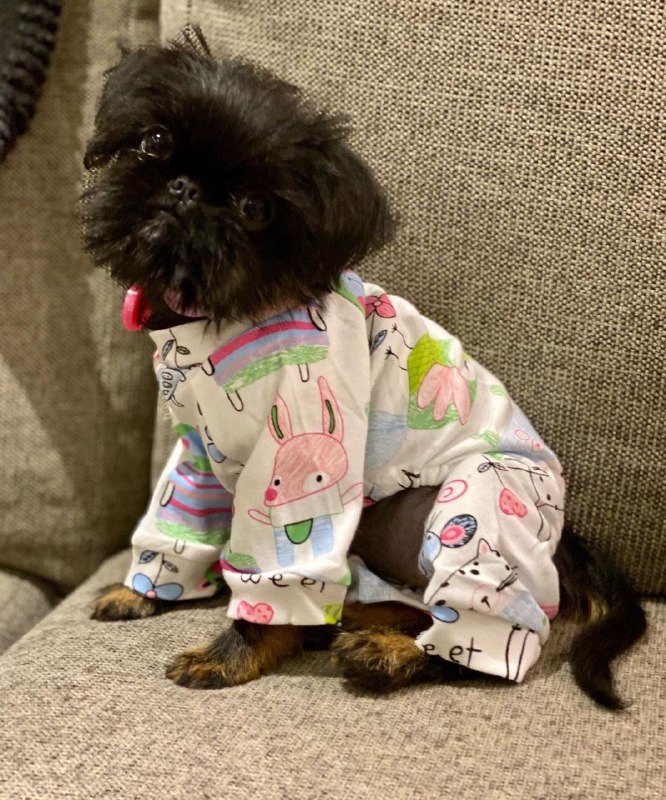 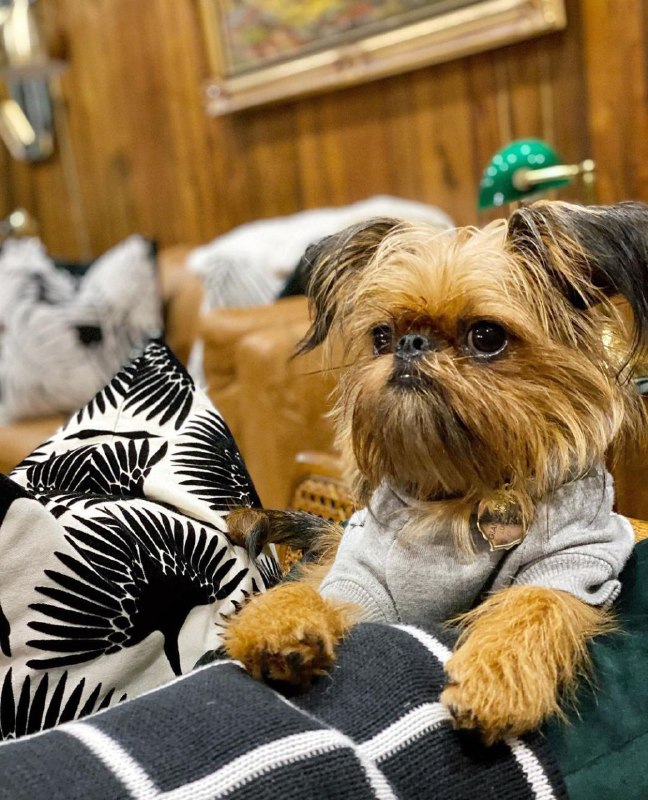 The Brussels Griffons originated in Belgium, where they were highly prized for their ability to catch mice. They were especially popular among the owners of stables, since these dogs, on some inexplicable, internal level, harmonize well with horses. They were kept both in private stables at households and in the stables of the city horse taxi.

In the creation of the Brussels Griffon dog, the Affenpinscher breed, the toy English spaniel, and the pug were also used to create the smooth-haired type of griffon. Affenpinscher radically influenced the size and wavy texture of the coat, and the influence of toy spaniels is especially noticeable in the large and very expressive eyes, the rounded shape of the head, and the peculiar lower jaw.

By the end of the 19th century, the Brussels Griffon became popular not only as a dog for hunting parasites in the stable but also as a pet with a very unusual appearance. Moreover, despite the labor past, people from the noble class willingly received a dog.

Maria Henrietta, the Belgian queen and also a big dog lover, fell in love with the little griffon and began to breed them on her own, as well as help popularize these dogs in other European countries. This happened after Belgian breeders created the first written breed standard in 1883, after which the Belgian griffin began to take part in exhibitions. It was after one of the dogs shows that Maria Henrietta wanted such a dog.

There are two types of Brussels Griffons in the United States: the hard-haired griffin and the sleek-haired griffin called the brabancon. In Belgium, three types are developed: small brabancon (with smooth hair, as in the USA), Brussels griffin with hard red hair, and Belgian griffin with hard hair of any color except red.
During the First and Second World Wars, the number of these dogs throughout the world was greatly reduced, and if it were not for American breeders, the very existence of the breed would be in question. Indeed, in Europe, they almost disappeared, and in England the small population that existed there was also attacked. 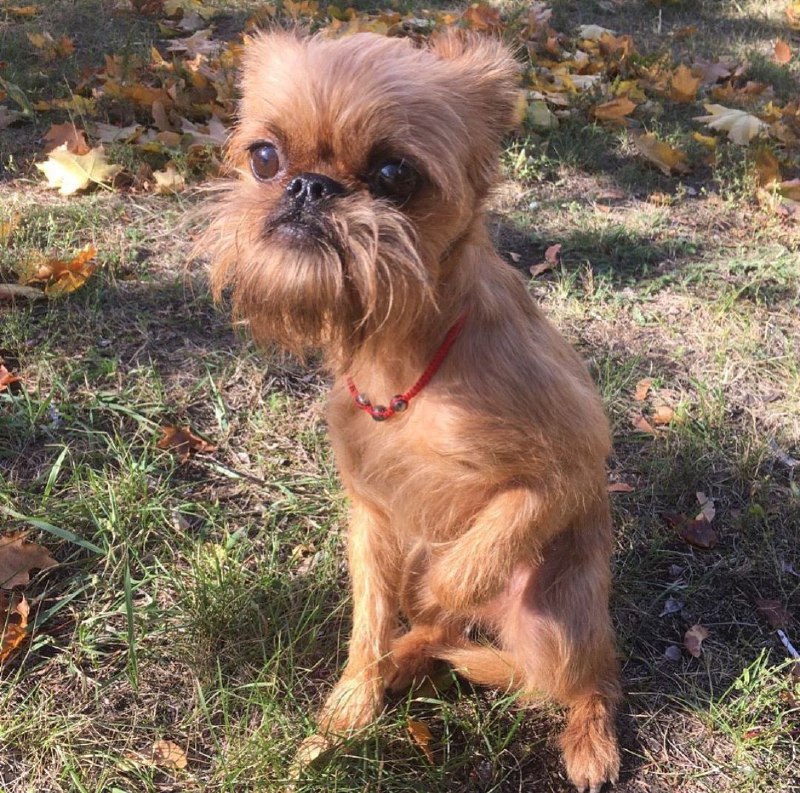 The Brussels Griffon is a small dog with a strong build, short limbs. The head is rounded, the ears are erect, the muzzle is slightly flattened, with a characteristic mustache and beard, which is why many say that the griffin looks like a “Wookiee” from Star Wars. The ears are erect. The tail is short, the coat can be smooth or hard. 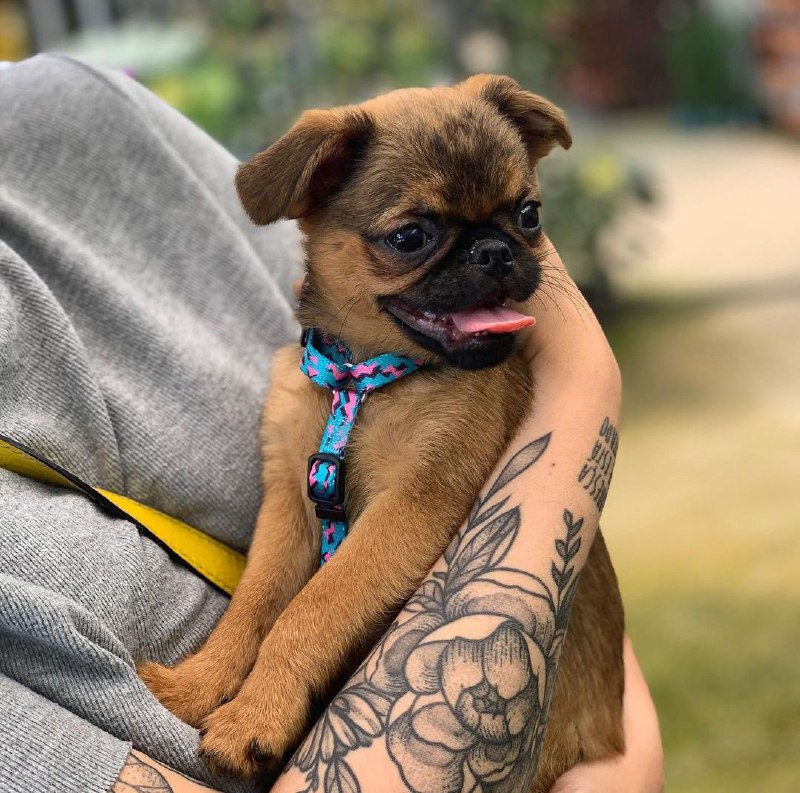 We can immediately say that this is a very cute and good-natured dog, which, at the same time, has a somewhat impudent and even arrogant disposition. But this is rather funny and not out of spite, and rarely brings trouble. Especially if the owner socializes his dog in the right way, loves it, then these qualities allow it to become the soul of any company, and fit into any environment. Although in fairness, it should be noted that not all griffons are alike, some of them are more shy, others, on the contrary, are impudent and daring.
The Brussels griffin always needs close contact with its owner and with his family, he loves his loved ones very much and is ready to spend all his free time with them. Often these dogs literally stick to their owners and need your attention. If they do not receive attention, their behavior may even be too provocative and a little strange. Also, the Brussels griffin does not like to stay at home alone for a long time, therefore such a dog is not suitable for everyone.

These are quite active animals that love various games, love walks, especially if there is somewhere to have fun with other dogs. But if your pet goes with you for a morning jog, he will also be immensely happy, and it is not known what he will like more – a run with the owner or playing with other dogs.
They love children, probably primarily because they see them as friends and partners for games and entertainment. But the griffon cannot be called a full-fledged nanny, since he often behaves like a child himself. Also, he has a limit of patience, and the child must be taught to communicate with the animal.

Conflicts with other dogs are rare. But they may try to hunt small animals, especially in the park. At the same time, they get along well with cats if they are taught from an early age. Strangers can be perceived in different ways, depending, first, on the attitude of the owner to the person, and secondly, on the type of character of the dog itself and its upbringing. However, in general, they do not show aggression, but can be both restrained and friendly open.
These dogs have a domineering character trait, which is why they can poke their beards everywhere and try to lead, but this, again, is rather funny, because in any case, first of all, next to you is an affectionate and kind friend. 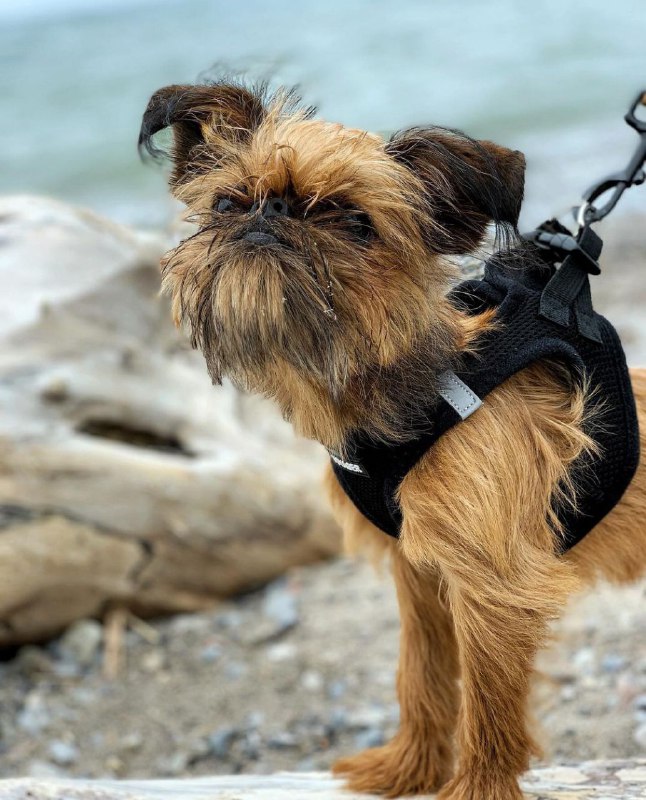 The Brussels Griffon accepts the training process well and even needs it as it gets the necessary food for the mind. The learning process should be consistent, with kindness and patience, as well as the necessary sense of humor. Rough treatment and physical punishment can only make the character more stubborn and withdrawn, therefore, you need to control yourself.
Training should be interesting, active, moreover, it is better than the activity gradually increases until the very end of the lesson, but here it is not necessary to go too far – look at the dog’s reaction. The main thing is that she does not overwork and does not lose interest – look for the golden mean. You don’t need to force her too much. Be sure to use goodies and praise. 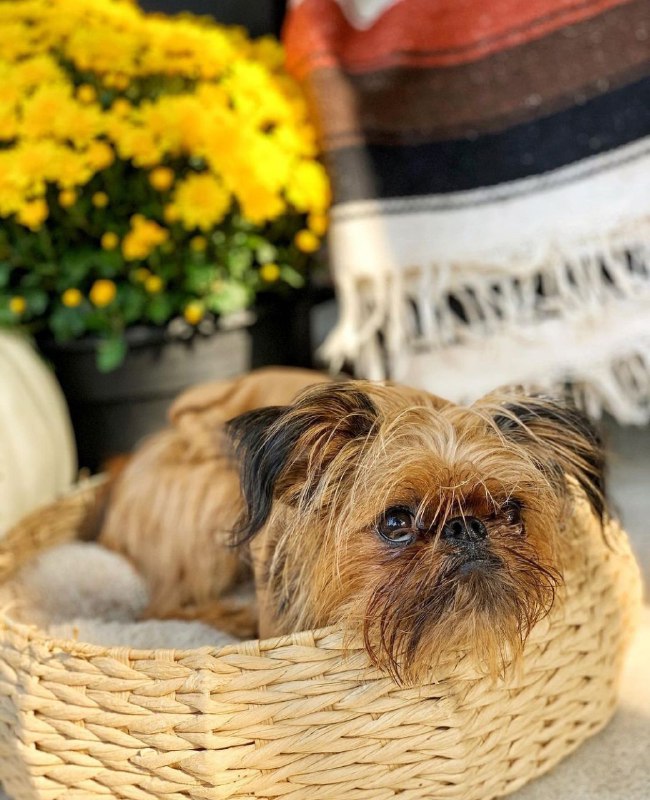 Regardless of the type of coat, the griffon can be brushed once a week. Eyes from attachments after sleep need to be cleaned daily or as needed, ears are cleaned three times a week, claws are trimmed three times a month. You need to bathe your dog once a week at least. 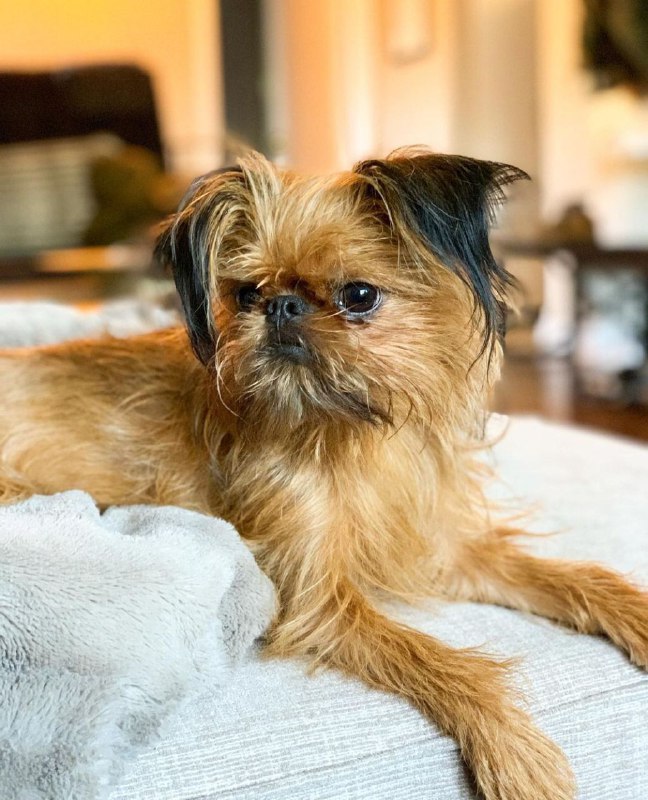 Representatives of the breed are distinguished by strong immunity in relation to viral and colds. At the same time, common pathologies are characteristic of dogs:

Daily walks, age-related feeding regimen, timely vaccination, treatment against parasites – these are the keys to the longevity and health of your pet. If you find suspicious symptoms, you must make an appointment with a veterinary clinic. 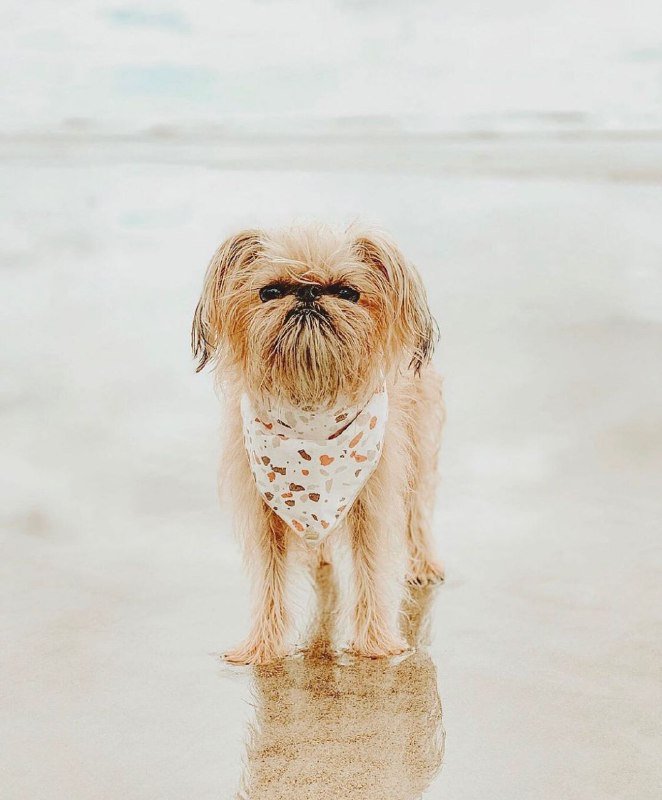 Before buying a Brussels Griffon, it is important to create suitable conditions for keeping your future friend. A lounger, bowls, toys, harness, dog hygiene products – only after purchasing these necessary things should you start looking for a kennel. Breeders who specialize in the breed are mainly located in large cities. If you live on the periphery, carefully consider the way back – already in the company of a four-legged friend.
Once a suitable Brussels Griffon kennel is found, you can start choosing the sex of your puppy. Remember that males are independent and aggressive, while females are obedient and loyal. The latter can create additional discomfort during estrus: while walking with your darling you will hardly be able to hide from the crowd of four-legged “suitors”.
If you have already decided on the gender of your future pet, it’s time to take a closer look at the candidates! The optimal age for a puppy to buy is 6-8 weeks. Babies who have torn away from their mother early in most cases grow up weak and unadapted. Also, the mental state of such a griffon leaves much to be desired: the puppy lacks primary socialization skills.
When choosing a Brussels Griffon, take a close look at the entire litter. If the kids are generally shy or even aggressive, ask the breeder to introduce you to another dog family. Healthy Brussels people should be curious, playful, and cheerful. It’s easy to check: take a bunch of keys or a rattle in your hand and stretch it towards the puppies. Well-being babies will immediately be attracted by the new sound and smell.
Pay attention to the griffon’s build. You should not choose the most well-fed puppy, but the excessive thinness of the animal should also alert you. Give preference to a medium-sized baby, carefully examine him from all sides. The coat should be thick, without bald spots; eyes and ears – clean; paws intact. A healthy “Brussels” should not cough or sneeze.
The last step on the road to a selfless friendship with Griffon is getting the documents. A conscientious breeder must provide the buyer with a vaccination certificate for the puppy, his passport, and proof of pedigree. It is worth asking him in more detail about the maintenance of the Brussels Griffons, and especially about the diet of the chosen baby. For a positive adaptation, it is not recommended to drastically change the diet of the puppy.