The Chihuahua Beagle mix is better known as the Cheagle. Their name is a mixed name by which we will refer to them in this breed guide. The Cheagle is actually one of the most popular crossbreeds to emerge from the designer dog movement! Their friendly demeanor makes it easy to see why.
He is an energetic little guy, energetic, curious, and funny. Not only will you fall in love with your new dog family, but you will also find yourself a new four-legged shadow that will never leave you! 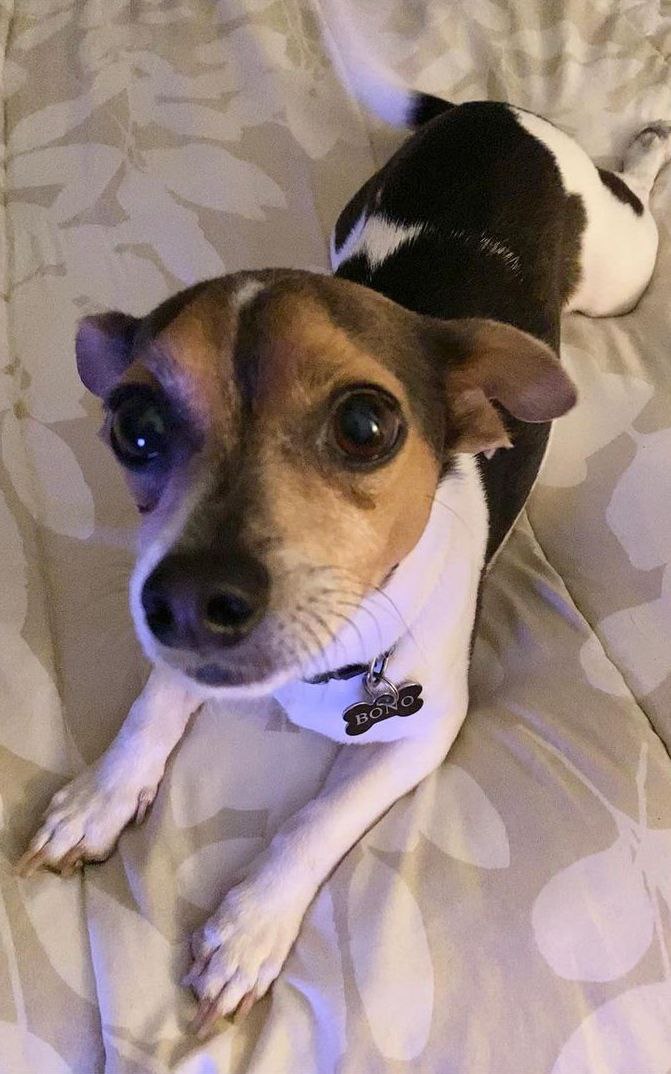 When it comes to temperament, Cheagla’s parents are the opposite of each other. So their puppy designer product is a well-balanced blend of both (hopefully!). You should expect the dog to be much simpler than the Chihuahua. Your puppy will also be less anxious and less protective of its owner and family than their Chihuahua parent. While your puppy may still be protective of his family, it is unlikely that he will be overprotective.
However, you can expect your Cheagle to be an excellent watchdog. They will notify you as soon as something or someone enters your estate. His parent Beagle is one of the noisiest dogs on the planet with his howling skills. To some, this trait may seem adorable. But others won’t. You need to consider this, especially if your home is noise-controlled.
The Cheagles are curious. While there is a chance that he might follow his nose and out of sight, he will most likely want to stay with his master. Always ready to play a game or play good old deeds in the garden or dog park, he will surely keep you on your toes. 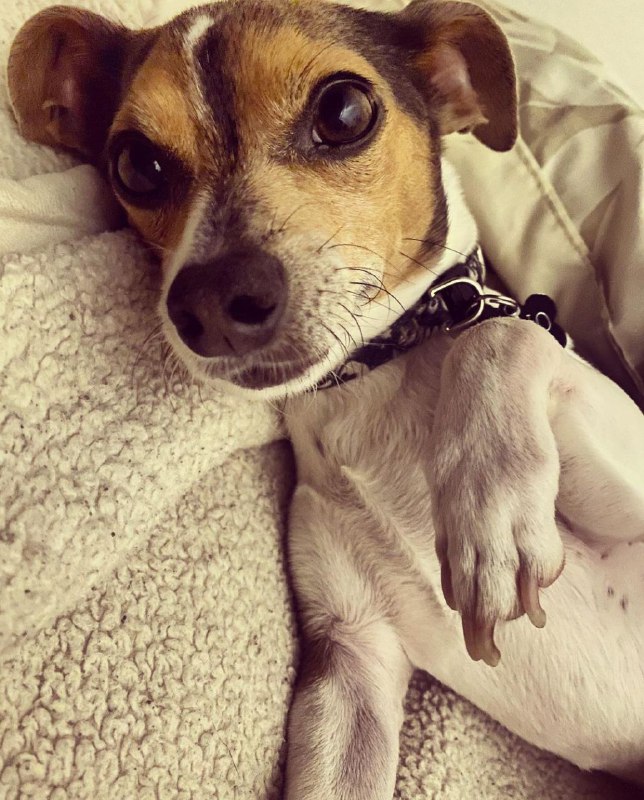 Its size will depend on whether its parent Beagle is a standard or pocket Beagle. If the size is an important factor for you, be sure to meet with his parent Beagle to find out what type he is. Cheaggles with a pocket beagle parent can expect a dog that is 8 to 10 inches tall and 10 to 15 pounds tall. If his parent is a regular hound, then you should expect him to be 9 to 13 inches tall and weigh 15 to 20 pounds.
Typically, a Cheagle will look like a large Chihuahua. They will have a smaller chihuahua head shape and often large, triangular-shaped ears that fall out. Cheagles also usually inherit the traditional hunting colors of the hound. It usually inherits the large, round, dark eyes of the beagle.
It will most likely inherit the long and thick tail of a hound, but it will probably be slightly curled like a Chihuahua’s tail. This is common for many Chihuahua crosses, another example. being jack-chi. It usually inherits the smaller pointed legs and skinny legs of the Chihuahua.
Just remember that since he is a blended puppy, he can take on any combination of any parent’s looks, and while his parent’s looks will play a big role in this, he can turn to either side. Since both his parents were gorgeous and popular breeds, you can rest assured that all Cheagles are just as adorable. 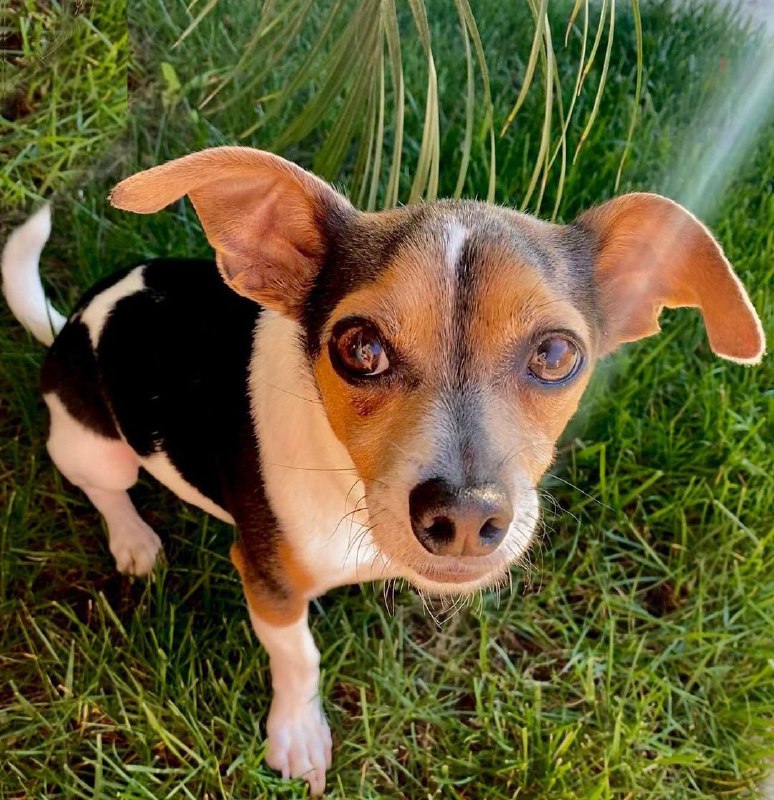 His coat will be entirely dependent on the coat of his Chihuahua parents, as they can have either short or long-haired coats. If his parent is short-haired Chi, then he will have short hair. If his Chihuahua parent has long hair, he will have a medium-length coat. Cheagle will have a thick double coat and will have moderate shedding all year round, shedding heavily during shedding season.
Its color will be a mixture of white, brown, black, red, fawn, cream, chocolate, brown, or blue. Cheagles quite often inherit the typical hunting colors of the Beagle parent. 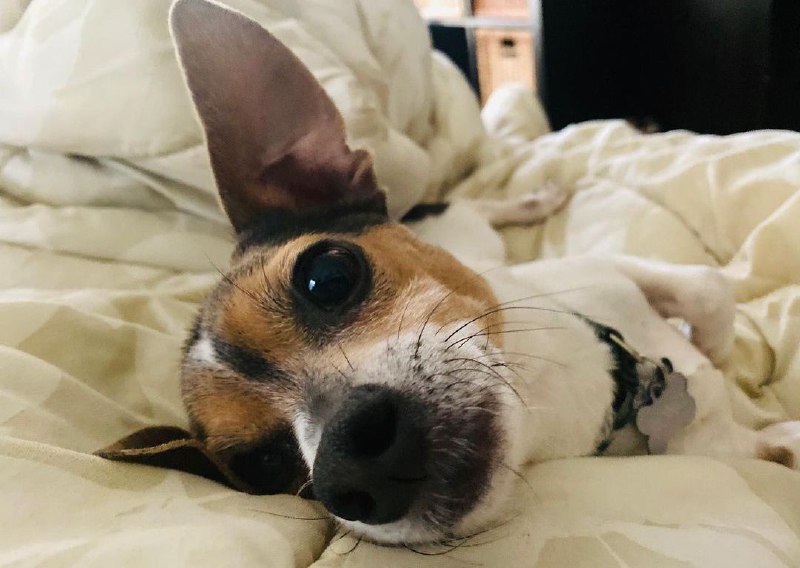 The Chihuahua Beagle mix will be full of energy. That being said, Cheagles don’t need any physical exercise like the Beagle. This can be an attractive factor for many families. You can expect Cheagle to need 30 to 45 minutes of exercise each day. His exercises shouldn’t be particularly intense. He will happily mix a walk in the neighborhood with playing in the garden. The Beagle parents do a good job of calming the temperament of this mix, unlike the Lab Beagle mix or Beagle Bull, which are both higher energy hybrids.
Living in an apartment suits Chigly quite well because of their less physical exertion. In any case, he will not be bothered where he lives as long as his family spends as much time with him as possible. For this reason, he should be placed in a family that can devote a lot of time to communicate. If you are a family that will work outside the home most of the day, this breed can turn vicious if left alone for long periods of time.
Because he loves his family and his personality is much calmer than that of his parent Chi. This means that Cheaggles are more tolerant of children. For this reason, they make an excellent pet. If he is well socialized as a puppy, then he should also feel good in a family with several pets.
It is important to make sure your yard is fenced in so that your Cheagle cannot escape because if it looks like a beagle, it can smell and chase it, or if it looks like its Chihuahua parent, it cannot show kindness to the incoming to a stranger 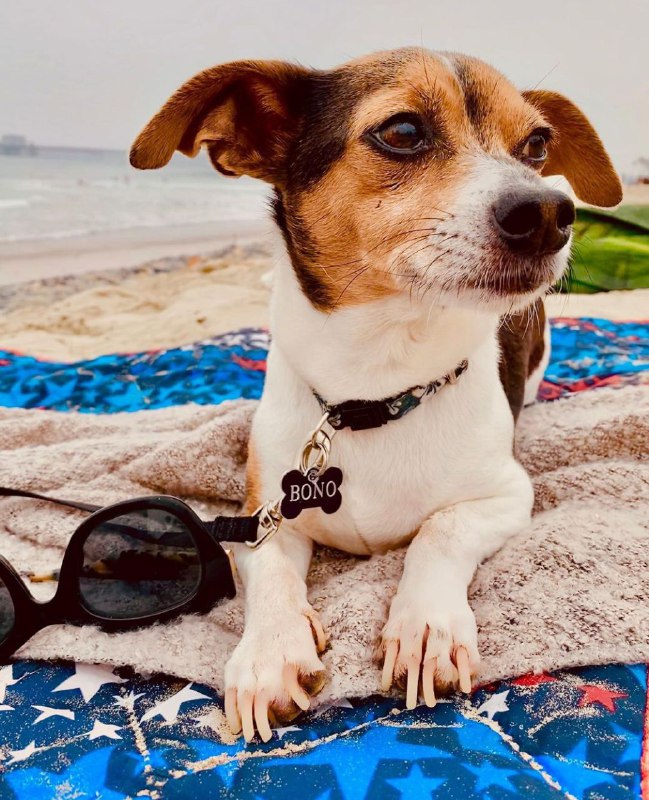 Cheagly is tricky to train given that both of his parents are independent. Both parents are stubborn, and therefore he can cause twice as much trouble! So, if you’re looking for a completely obedient dog, then the Cheagle is not for you. Instead, see this cocky independence as an alluring part of his personality and the two of you will become best friends.
When it comes to training with independent dogs, persistence, and consistency. The moment you give up will be the moment when he realizes that he can hug you with his tiny paws. Use positive reinforcement. If he inherits the Beagle’s appetite, then be sure to use tasty treats as this will be his drive.
Cheagles do have the potential to be overprotected because of their Chihuahua genes. It is important that you socialize Cheagl with other animals of all shapes and sizes, and people, both inside and outside the home. This will ensure that he is a polite dog. But it will also boost his confidence. This means you will have a much happier dog, and as the saying goes, everyone wins! 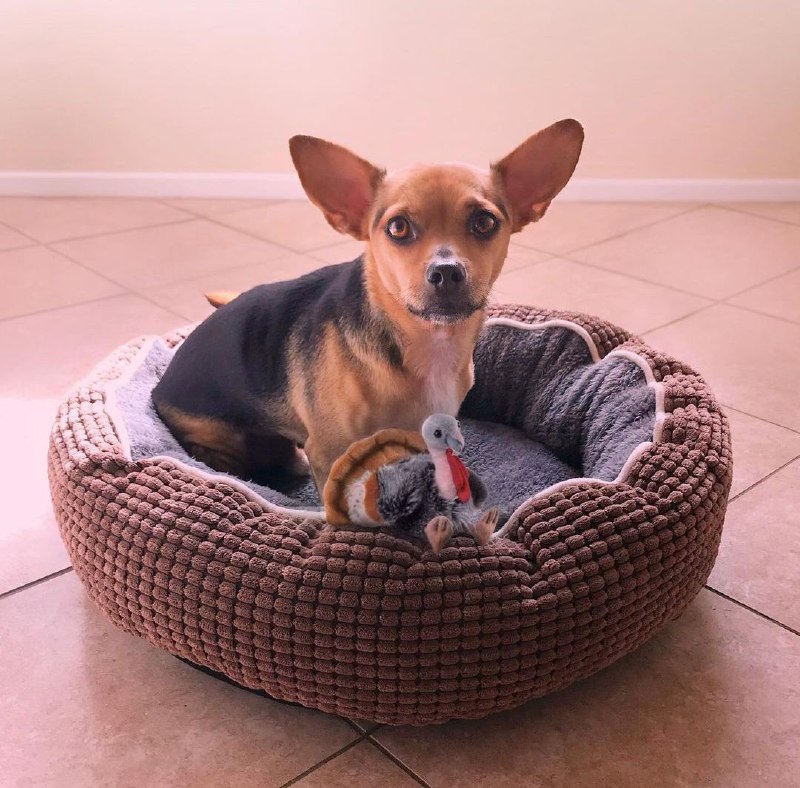 A Chihuahua Beagle mix is ​​likely to be a healthy dog. They will usually live 10 to 16 years. Since he is a mixed breed puppy, he can inherit health problems from either parent. This means that you should know the following: 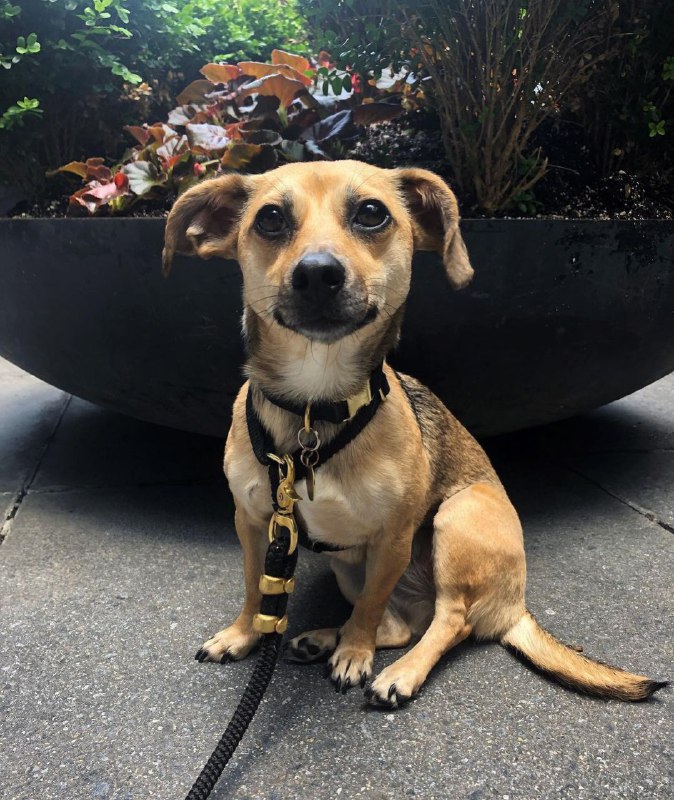 Eating is the easiest way to keep your Cheagle healthy, but don’t overfeed it as its parent Beagle is known to gain weight if left alone. If you notice weight gain, be sure to switch it to weight control food.
A Cheaggle will eat between 1 cup and 1 ½ cup of food a day, depending entirely on his size and energy level. High-quality dry nuggets work best for Cheagl and his tiny and compact mouth, as the nibs help break down plaque and prevent periodontal disease. 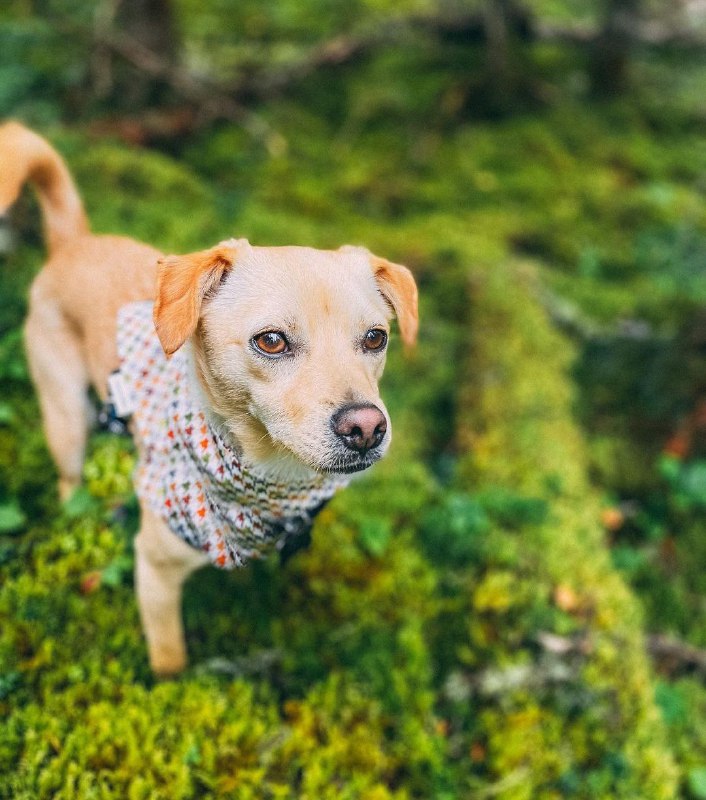 Again, the Cheaggle grooming procedure will depend on whether he inherits the long or short coat from his Chihuahua parent. If he inherits short hair, then he only needs to groom once a week, and if he inherits long hair, he will probably need brushing. at least twice a week as good as occasional shedding.
Since he has a small mouth, you should brush his teeth once a week with dog toothpaste and be sure to keep his eyes and ears clean too, especially if he inherits the large opening ears of his Beagle parent.
The Cheagle should be bathed every 8-12 weeks and be sure to wash it with natural dog shampoos, otherwise, you risk irritating its skin and natural fur oils. 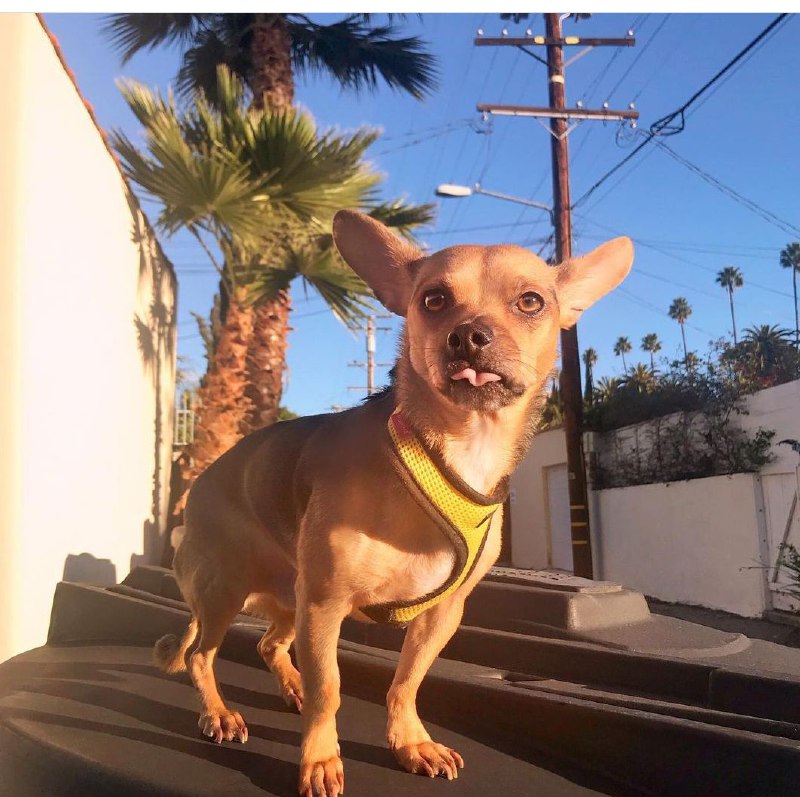 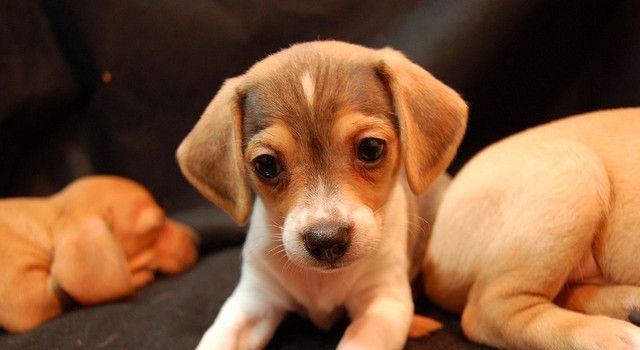 There is no doubt about that, the Chihuahua Beagle mix is definitely a dog catch! With the best of both breeds, the Cheagle is likely to suit more families as it is nowhere near as protective and demanding as the Chihuahua and does not need as much exercise or food as the Beagle. Choosing Cheagle is your best friend for life, and you and your entire family will love it.