The English Setter is renowned for its endurance. The elegant appearance, worthy of a royal personage, hides a perky character and inexhaustible optimism. Quick wits and developed intelligence are the main reasons why the English Setter is loved by both hunters and ordinary dog ​​breeders. Despite the energy and unwillingness to sit in one place, the animal rarely imposes its society on others. It is difficult to find a more understanding and devoted friend than a setter, even among his four-legged fellows. This is a balanced and moderately sociable dog who will happily keep company while walking in the park or watching the evening news release. 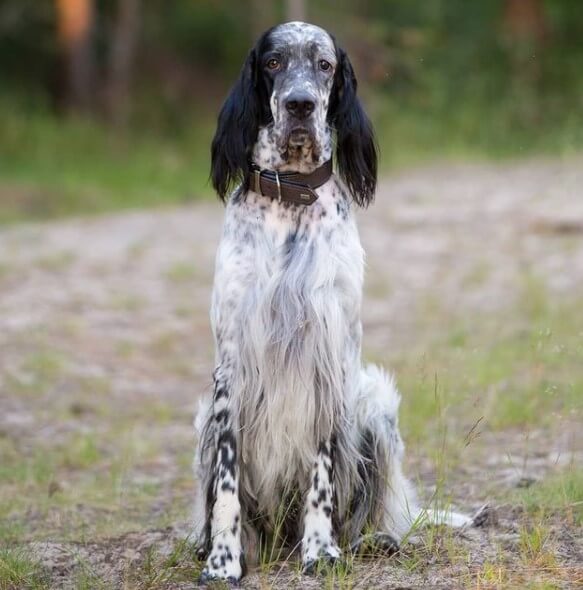 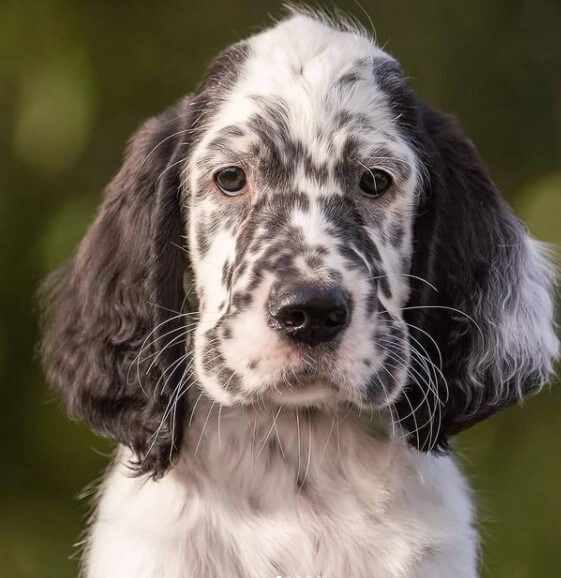 History of the English Setter Breed 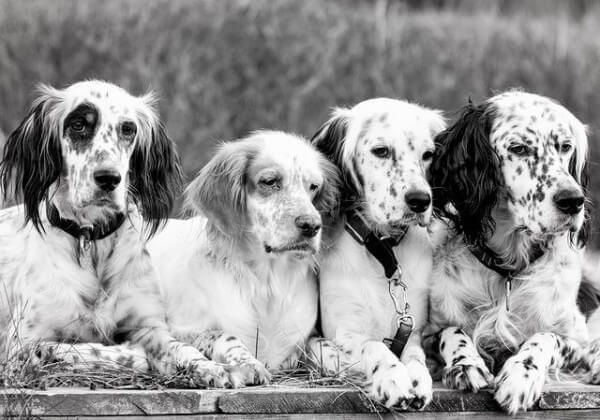 The Setter is a rather old breed, since similar dogs existed at the end of the 16th century, and were used as hunting dogs. However, humans purposefully participated in its formation, and Pointers and Spaniels were used for crossing. Moreover, the work on improvement has been carried out for several hundred years.

The English Setter we know today was created in the 19th century by Edward Laverac and the Welshman R.L. Purcell Llewellyn. Laverac acquired his first two dogs, Ponto and Old Mall, from the Rev. A. Harrison in 1825, and these served as the basis for the entire future breed.

It is important to understand here that both of these people will play an important role in the development of the breed in the future since each of them will develop certain qualities. For example, Laverak paid great attention to friendliness, openness, and tried to create a dog with an affectionate temperament.

He used Irish Setters and Pointers (the Pointer, as you can see, was used twice – in the early stages of the development of the breed and in more recent times). His dogs were excellent home companions, showed themselves well in the ring, but when it came to field trials, things were not so good at all.

And here Llewelyn intervened. He took the dogs of his colleague Laverak as a basis but tried to improve the dogs by adding Gordon Setters and other breeds to the breeding program to increase speed and flair. As a result, both lines developed in parallel and came to the United States in the late 19th century. The Laverac line became the basis for the show, and the Llewellyn line is field dogs, and such a division is still present today.

So what’s the real difference? Show dogs are friends of man and family, although they are able to hunt, field dogs have a sharper sense of smell, more developed reflexes, and superior speed. Externally, show dogs are usually somewhat larger than field dogs. Also, they have a greater variety of coat patterns. Thoroughbred English Setter in many countries is a rarity, it takes 98th place among the breeds of the American Kennel Club. 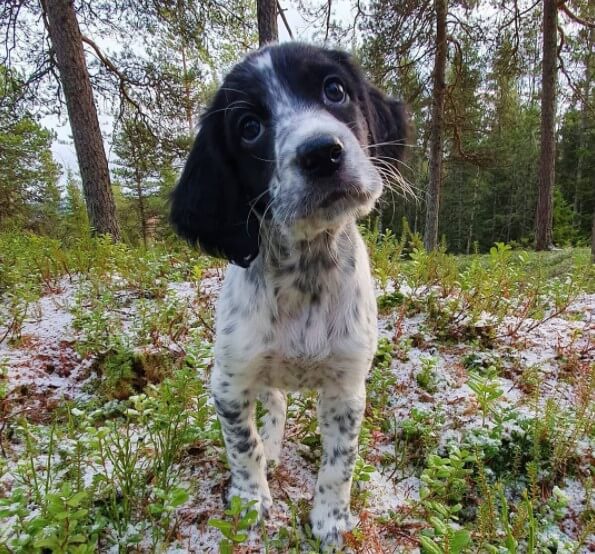 The English Setter is a large dog with a muscular, athletic build and thick coat. The ears are hanging, the chest is pronounced, the limbs are medium, proportional. The tail is slightly longer than average. 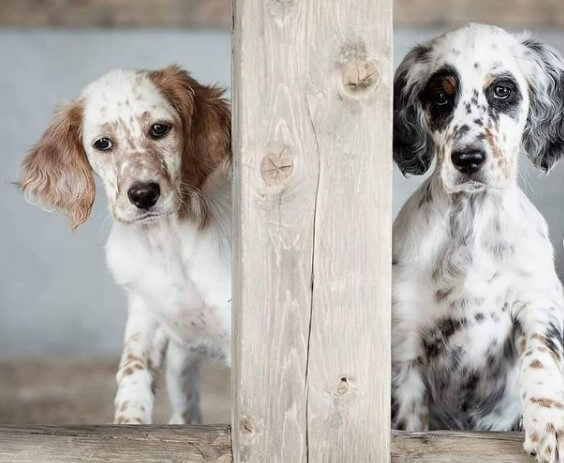 To determine the speckled color of a setter, the word “Belton” is traditionally used, attaching a prefix to it and thereby specifying the color:

There is also a tricolor version – brown or black speckled with a tan. For the breed, a uniform arrangement of specks without large spots is mandatory. 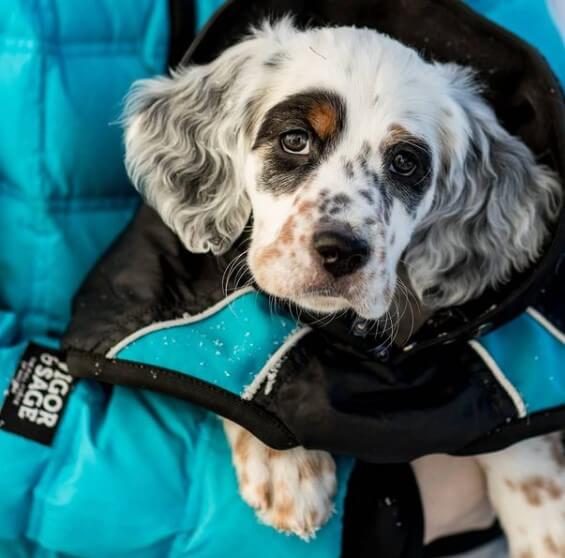 The English Setter breed of dog is a very friendly and loyal dog, which was originally developed as a faithful companion to humans. These pets are very strongly attached to their family and owner and are ready to help them wherever possible. On the other hand, sometimes they can be inherently stubborn, especially when they seem unfair and rude treatment in their direction.

The English Setter has a high energy level, although it cannot be rated 10 on a ten-point scale. Rather, the energy level will correspond to an eight. In other words, the dog will happily participate in all active games, long walks, travels, and hikes, but if after a walk you decide to rest, it will just as happily rest with you.

Despite its large size, the breed is highly adaptable and may well live in a city apartment. However, this can cause discomfort due to a large amount of wool, which he will certainly leave on the upholstered furniture, so here you make a kind of compromise.

If you live in a private house, then the dog will be able to perform the functions of a watchman. But, one should not expect that the English Setter will be as fierce as, for example, the Caucasian Shepherd. He will bark at the approach of strangers, perhaps even try to stop the intruder, but still, these dogs have a love for people.

In general, tenderness, love, affection are very inherent in this breed, and this can manifest itself not only in relation to the owners but also to your friends and guests of your house, to whom you are friendly. The dog sees this and opens itself. Aggression is not typical for Setters.

This breed has hunting instincts and to hunt small animals, including cats. If a cat lives in your home, you need to train your dog to be present from an early age. Although the rest of the cats, on the street, can still be enemies. Conflicts with other dogs are possible, but not more often than usual.

The English Setter perceives children very well, these are his little friends, with whom he is always happy to spend time. He can also be a good nanny. In general, the breed has very high intelligence and understanding of humans. Since the English Setter mainly worked in tandem with a hunter, he was often away from him, the breed developed a high degree of independence in decision-making, and this should be taken into account. 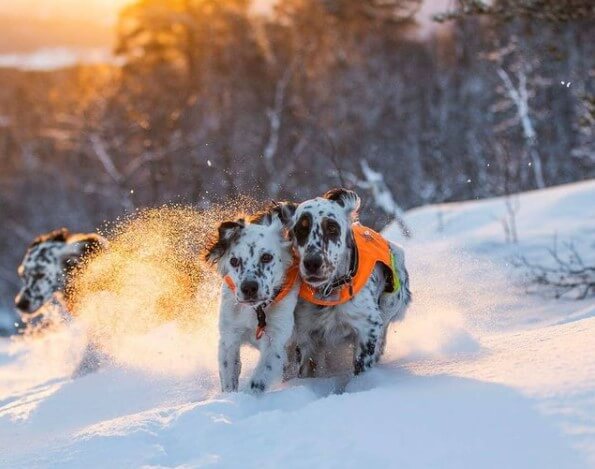 English Setter can learn a lot of commands, but basic ones are a must. Training should be kind, without rudeness and physical punishment, otherwise, the dog will only withdraw into itself, become even more stubborn, and generally stop following commands normally. Here the whole thing is in close contact with the owner, in love and understanding, because if you become an enemy to the dog, then you will remain.

Workouts should be consistent, active, and interesting, they should not be prolonged, it is better to work for half an hour, but it is effective than spoiling each other’s nerves for half a day. Be sure to use praise and rewards in the form of treats, the dog will appreciate it. 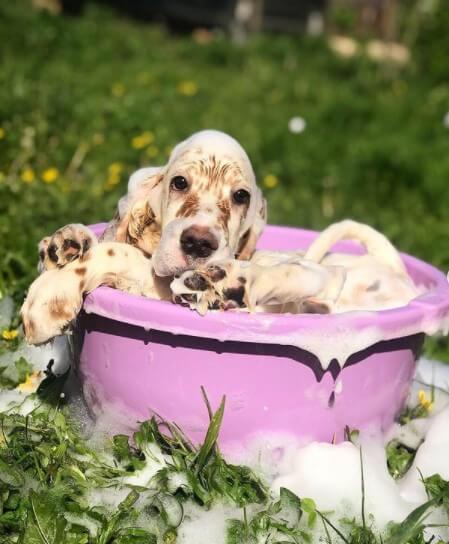 The English Setter needs daily and careful grooming. This is due to the long and thick coat, the main object of the breed’s pride.

The animal’s hair needs daily thorough combing. Use a natural bristle comb or brush: in addition to removing dead hairs and dust, this device will provide your pet with a pleasant massage. When combing the Setter, pay special attention to the long hair on the paws and tail of the dog: this is where tangles are most often formed.
Trimming the coat will not be superfluous. In this case, it is recommended to contact a specialist, and not to arrange a beauty salon at home. Representatives of the Setters show line need this procedure every five to six weeks, while the working one – much more often.

The coat of the English Setter is covered with a thin layer of fat that protects the hairs from dirt and serves as a water-repellent barrier. Do not bathe your pet regularly: even mild dog shampoos can “wash out” the natural defenses. It is enough to arrange bath procedures for the Setter every ten days or as needed. When going for a walk in the fall or winter, it is recommended to dress the animal in waterproof overalls.

Dog’s long and drooping ears build up grease and dirt, which can cause otitis media, which eventually develops into chronic. Clean your dog’s ears with a cotton pad at least once a week.

Rinsing the Setter’s eyes is an equally mandatory procedure, and it is best to use brewed tea.

Despite being overly active, English Setters rarely sharpen their claws sufficiently. The reason is that animals prefer to run on the ground rather than on asphalt. As the claws grow back, they can be uncomfortable and cause your pet to limp. Use a nail clipper for large dog breeds and trim your nails once a month. The file will help smooth out sharp edges and jagged edges.

Setter’s teeth are cleaned with a special finger brush using dog paste. Do not share your own hygiene product with your pet! Substances contained in “human” toothpaste can cause allergic reactions and even poisoning. 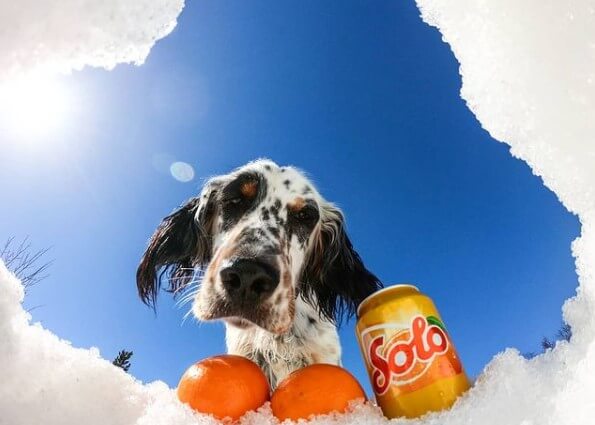 Speaking of dog nutrition, it is worth noting: Setters are not prone to obesity, since they instinctively limit themselves to food. Once you have an accurate serving size, you will never have difficulty feeding your pet. If the animal has emptied the bowl and continues to lick it, then it is still hungry. Do not be afraid to give an extra portion: the Setter will never devour food out of greed as if he were indeed an English aristocrat. The best option for feeding your pet is a competent combination of natural food and premium brand food. 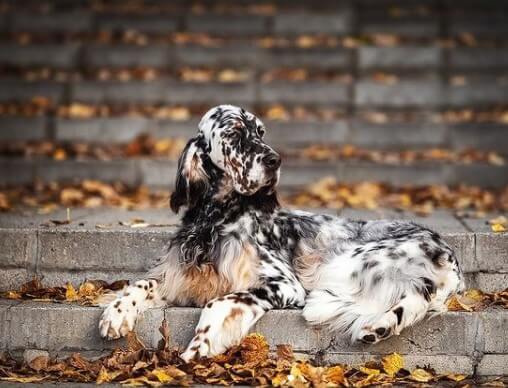 The excellent health of the representatives of the breed is due to the fact that the breeders have always selected for breeding the strongest dogs without hereditary defects. Despite this, English Setters are still susceptible to several diseases: 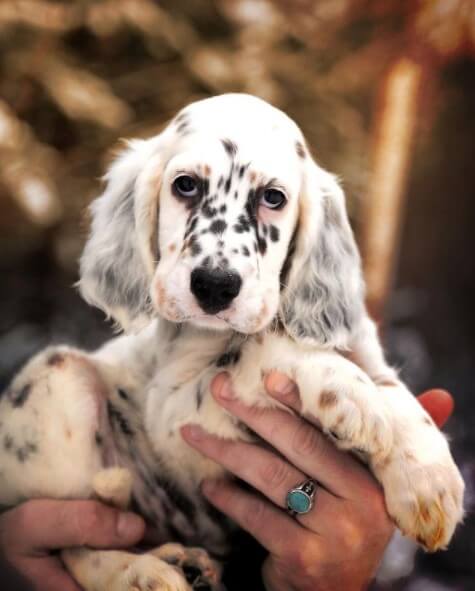 You will acquire a purebred English Setter only in specialized nurseries or from a breeder who breeds the breed. In an attempt to save money, many often buy a puppy from hands or from the market, and this is wrong. In the case of the Setter, you can get a pet with deviations from the standard or a bunch of hereditary diseases.

You should not rush to choose a puppy. Ask the breeder to show you the four-legged pair from which the litter originated, observe all the puppies. Try to determine if there are defective babies among them: deaf, blind, with obvious breed defects. If such puppies are present, specify if the breeder can show pictures of the grown Setters from the last litter. So you can determine how “standard” and healthy pet is waiting for you.

How to choose one toddler among all adorable puppies? Make a selection (desired gender, color, and degree of compliance with the breed standard) and observe the puppies. Evaluate the general behavior of the Setter, his playing style, and even his gait. A healthy baby should be active and moderately curious.