The German Shorthaired Pointer is the choice of activists who are crazy about jogging and walking in the company of a four-legged friend. The dog’s playfulness and enthusiasm make it an excellent companion. The animal will find a common language with both an adult and a child who needs supervision. German Shorthaired Pointer will not leave indifferent the hunter either: this breed is always in its element – on land and in the water! The dog will not be frightened by either the mating season of the partridges or the strong antlers of the deer. 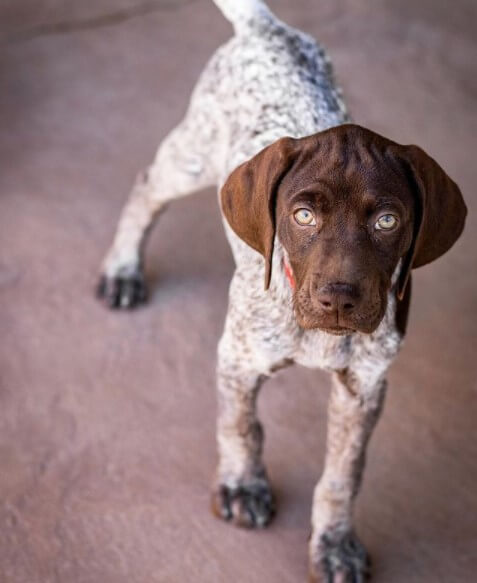 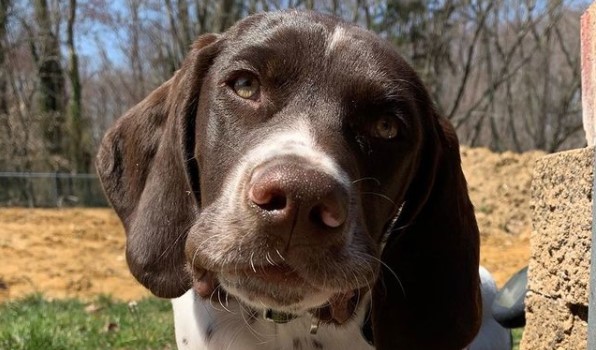 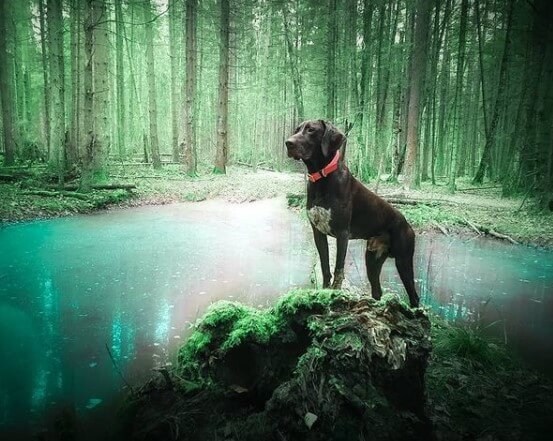 Despite the fact that the Pointer, as a hunting dog, is mentioned in Germany as early as the 17th century, in those distant times, it had a slightly different appearance. And the Pointer, closer to the breed that people know today, appeared much later – around the middle to the end of the 19th century. These dogs were deliberately bred to obtain a hunting dog with certain external characteristics and skills.

The very same German Pointer of the 17th century (or, as they were also called in England – German Bird Dog), was obtained from crossing between Spanish Pointers and Bloodhounds, as a result of which a large-sized hound with an elongated muzzle and excellent hunting qualities appeared. Further, in order to convey grace and beauty to the breed, the owners-breeders – noble aristocrats, brought their English counterparts, and as a result, in the 19th century, the Kurzhaar, which is so loved in Germany today, was already formed.

In the course of the long history of the development of the breed under the guidance of a person, breeders carefully selected individuals based on ideas about endurance, obedience and harmonious character, intelligence, and not only on the hunter’s genes and appearance. The work was carried out comprehensively, but it took a lot of time – more than 200 years.

Moreover, even Prince Albrecht of the Royal House of the Hanoverian dynasty was fond of breeding and breeding Pointers. He advised other breeders to select dogs based on the combination of their beneficial qualities, and not based on the appearance of the dog.

In 1925, Dr. Charles Thornton from Montana brought the first German Shorthaired Pointer from Germany, and based on this dog, he began breeding the breed in the USA. After 5 years, she was recognized by the American Kennel Club. The Second World War made adjustments to the development of the breed in Germany and Austria.

Defeat in the war and colossal destruction, poverty, and hunger forced the population to decline, and if some of the dogs were not taken to Yugoslavia, today they might not remain at all. Currently, the Kurzhaar is ranked 19th among 155 breeds and varieties recognized by the AKC. 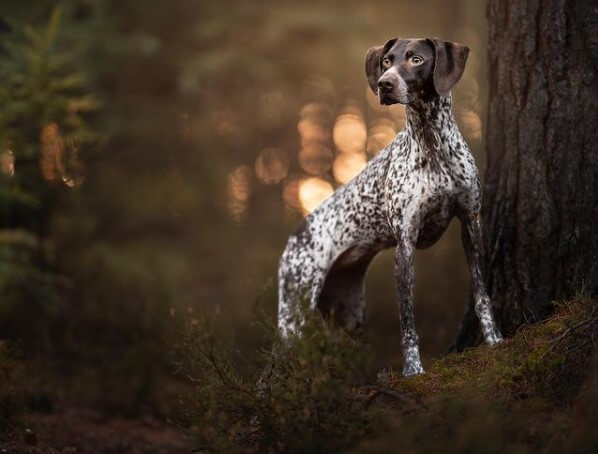 The Kurzhaar is a slim, athletic dog with a large and deep chest, long limbs, and a medium-sized tail. The neck is long, the muzzle is elongated, the ears hang down on the sides of the head to the cheekbones. When running, the head is flush with the spine or lower, which is necessary in order to smell prey. 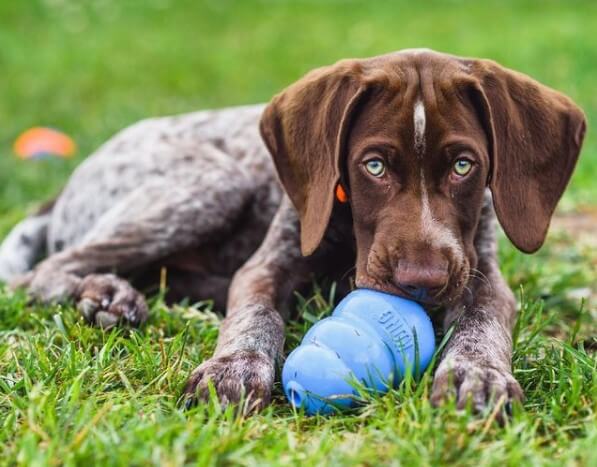 The standard provides for the following German Shorthaired Pointer colors:

The darker the color of the German Shorthaired Pointer, the better. 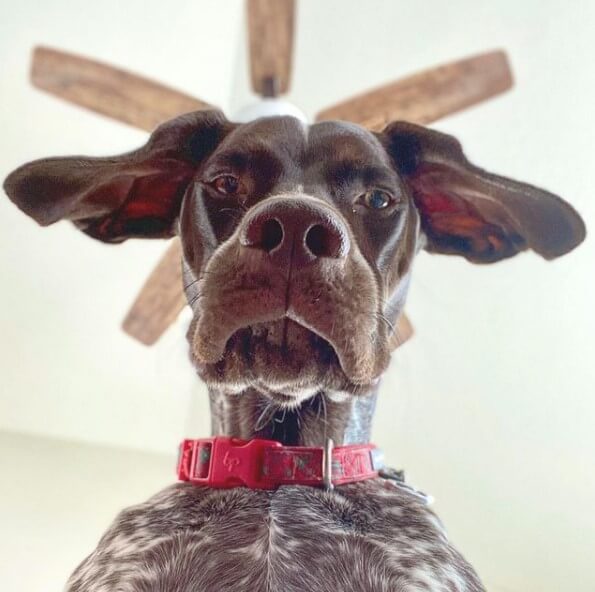 German Shorthaired Pointer has a huge amount of internal energy, loves activity, walks, games. If the owner does not have the opportunity to provide the animal with at least several hours of active walks a day, it is better to get a dog of a different breed, since the Kurzhaar will suffer from an excess of energy that has nowhere to put it. They have an excellent sense of smell, are very hardy, can run for a long time tracking prey or simply exploring interesting smells. They can swim and get their prey out of the water.

In addition, they need food for their mind – training, mind games, communication with other people, and socialization. By the way, it is better to start socialization at an early age. In the modern world, the German Shorthaired Pointer is often used not as a hunting dog, but as a companion dog, since it has a wonderful character.

The Kurzhaar breed is very friendly, open, and positive towards everyone. They even love strangers, although they are wary. They perfectly understand a person, his words, mood, and emotional state. We can say that for each of the family members, including children, he will be a true friend, loyal, kind, intelligent, and obedient.

During walks on the street, they need to be closely watched, as these dogs are very curious, and have strong hunting instincts. Certain odors can attract the Shorthaired Pointer so much that the dog will follow the trail ignoring the owner’s commands. Therefore, you definitely need to pay attention to obedience, and the formation of the right relationship with your pet. Although, nevertheless, sometimes it is much more reliable to use a regular leash. 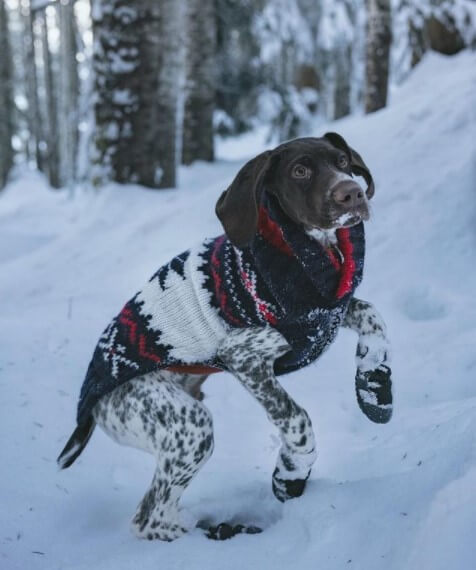 The German Pointer has high intelligence, it can be taught to many commands, not limited to basic ones. In the learning process, you need to have a positive attitude, be patient, attentive, and use various types of rewards and refusals to achieve your goal. In fact, Kurzhaar loves to study, it is, so to speak, in his blood, the main thing here is not to spoil the case yourself.

Much attention also needs to be paid to behavioral correction and obedience development, in addition to emphasizing refusal commands. This will help you keep your dog from wandering around to explore new smells. Unreasonable yelling, inadequacy, anger, and beatings should be excluded. You should only punish a dog for a serious offense. 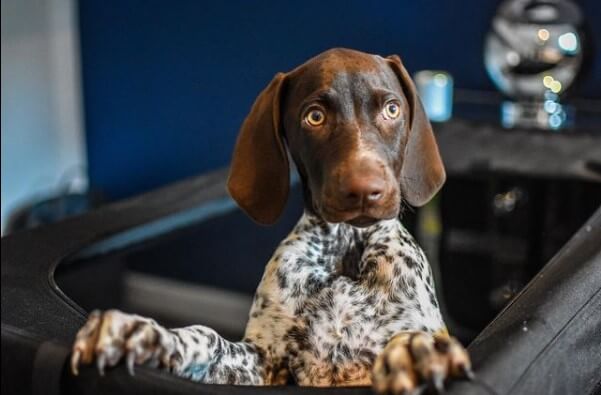 The Kurzhaar breed dog has a very short coat and therefore needs to be combed once a week and enough. Always keep your dog’s ears and eyes clean, and trim his nails once a week. Bathe the dog about twice a week. 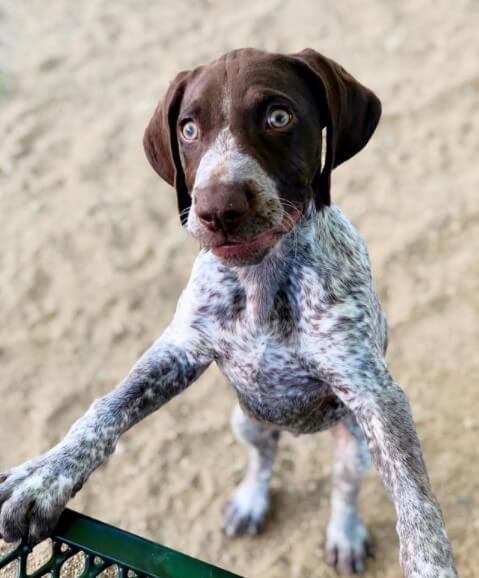 The German Shorthaired Pointer is a hunting breed that requires a specific diet, in particular, animal protein in large quantities. It can be boiled meat, cut into pieces. Offal and cartilage are equally important. Puppies should eat foods high in calcium: milk, cottage cheese, kefir. Thanks to them, the puppy will grow up with healthy teeth and bones. By the age of three months, the number of dairy products must be reduced.

Kurzhaar’s diet should also include porridge cooked in broth (except for pearl barley). Please note that adding salt is highly undesirable. Dilute the insipid taste of porridge with fiber-containing foods: pumpkin, zucchini, carrots.

Puppies up to six months need to be fed five times a day while giving out small portions. After six months, the number of feedings is reduced to three. Kurzhaar must have constant access to drinking water. Use bottled or tap water, letting it brew for 6-8 hours. 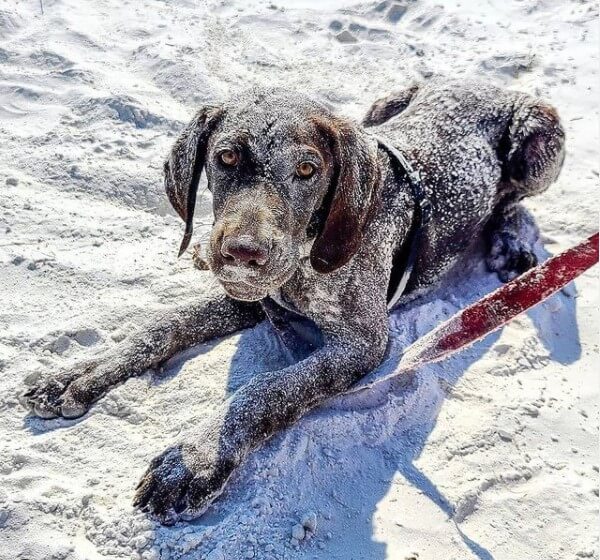 The breed is distinguished by its endurance and strong immunity, so dogs rarely bother the owner with their malaise. However, some diseases are the most common in German Shorthaired Pointers. Among them:

The number of genetic diseases in Kurzhaars is small in comparison with other dog breeds. The exception is von Willebrand disease, a blood-related ailment. 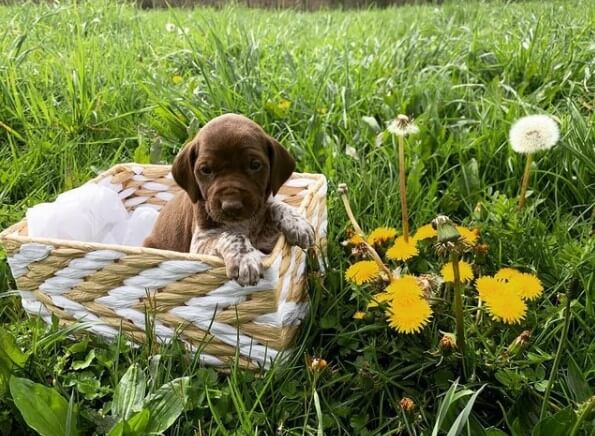 If you want to become the owner of a healthy and harmoniously developed baby, do not purchase it from breeders with a dubious reputation. You should not go to the markets, chasing a low price. These savings will further translate into regular visits to the veterinary clinic.

Specialized nurseries are where to go in search of the German Shorthaired Pointer. The ideal age to acquire a puppy is 2-6 months. The baby’s psyche is already quite stable, and there will be no problems with adaptation to a new family. Before checking out the litter, ask the breeder to show the parents. Their shortcomings are most often reflected in the offspring.

When choosing a future pet, pay attention to the most playful and active puppy. Shiny coat, perky eyes, moderate fatness – all these are indirect signs that the baby will not go to the veterinary clinic the next day. And, of course, do not forget to listen to your own heart: it will never let you down!