Does the idea of ​​a Golden Retriever Bulldog mix sound like the perfect dog to you?

Yes, both breeds are lovable and affectionate canine companions, but what about the mix?

When thinking about the mix of the Golden and Bulldog as a possible pet, it is important to know all the facts about this designer dog.

English bulldogs have some serious health problems related to the physical appearance of the breed.

Many animal welfare and dog breed organizations warn potential owners about these risks.

Can You Reduce The English Bulldog Health Problems By Crossing It With Another Breed Like The Golden?

We look into the facts so you can make an informed decision about your next pet. 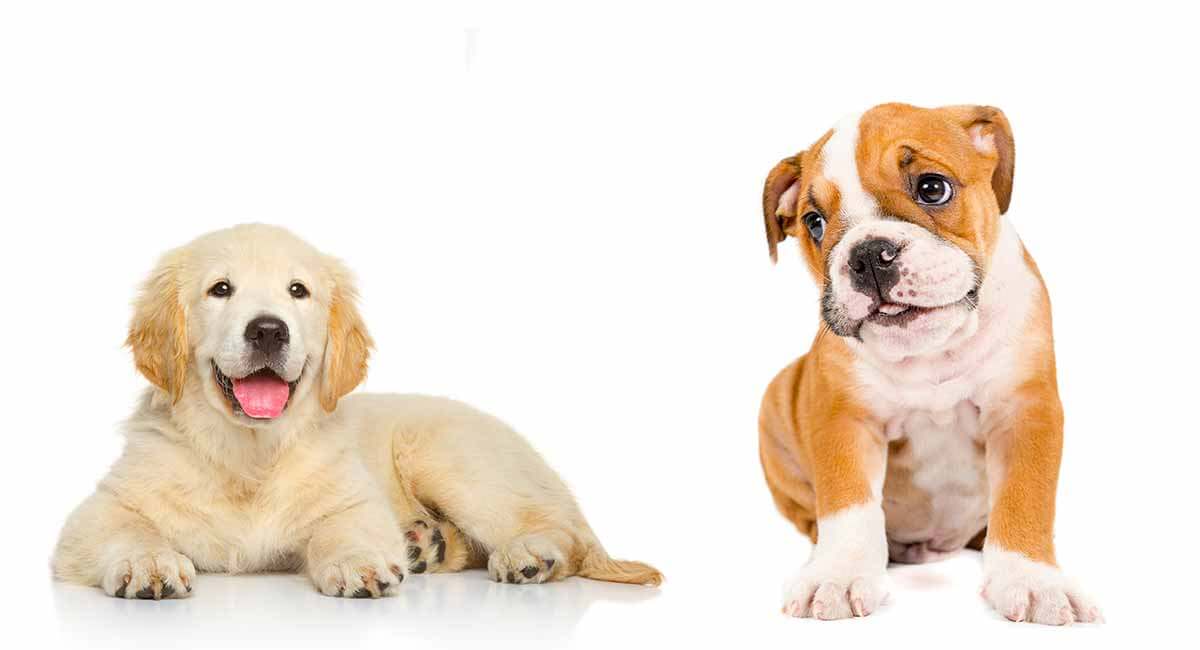 They were created to combine the best traits from two different breeds.

You may have heard of the term hybrid power.

That is, when two different breeds are crossed, the resulting genetic diversity leads to healthier offspring.

Hybrid vigor is real, however, in the case of the Golden Retriever Bulldog mix, the English bulldog’s significant health issues will play an important role.

We’ll dive deep into the bulldog health issues later, but first an overview of the two parent breeds. 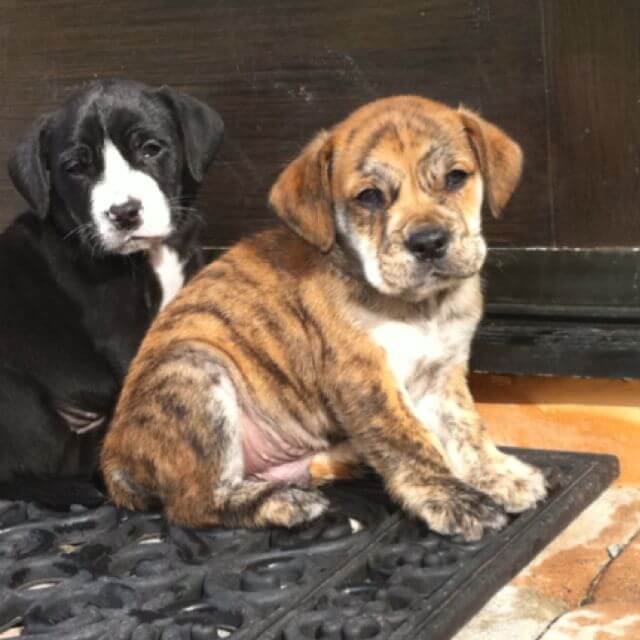 The Golden Retriever Bulldog mix (often called the Golden Bulldog) is an engaging dog that combines cute looks and a sweet personality – no surprise given the parent breeds!

The golden dog has been a popular and family dog ​​for many years.>

The breed is known for its handsome looks and friendly, happy personality.

Originally bred as a hunting dog in Scotland, the breed’s winning temper quickly made it a favorite family pet.

The English bulldog is also known for its appealing temperament.

Loving, calm, and devoted, today’s bulldog is certainly a long way from its origins as a fighting dog in the now extinct blood sport known as bull bait.

The Bulldog’s distinctive appearance appeals to many dog ​​lovers, but it can lead to serious health problems.

What Kind of Dog is the Golden Retriever Bulldog Mix?

The Golden Retriever is a strong medium-sized dog.

Males have a height at the shoulders from 56 to 61 centimeters and females from 51 to 56 centimeters.

Goldens are known for their dense double coat, which has this famous golden color.

They shed heavily, especially when shedding a thick undercoat.

The English Bulldog is a medium-sized dog.

The bulldog coat is short and sleek.

It is available in a wider range of colors than the Golden and can also have patterns and markings.

Although bulldog hair is easier to care for than golden hair, care must be taken to keep the folds of the skin clean and dry.

All mixed-breed dogs can inherit any combination of physical traits from a parent.

Your dog’s appearance may favor one breed over another.

Or the result may be a mixture of the characteristics of the parents.

In general, the Golden Retriever Bulldog mix is ​​a medium-sized dog that falls into the Golden and Bulldog weight ranges.

The height can vary, taking into account the height differences between the parent breeds.

Many Golden Retriever Bulldog mixes have slightly wrinkled skin on their bodies and faces.

The coating length can range from short to medium.

Your puppy may inherit the coat from its bulldog parents.

The coat of the mixture may be shorter than that of the purebred golden. 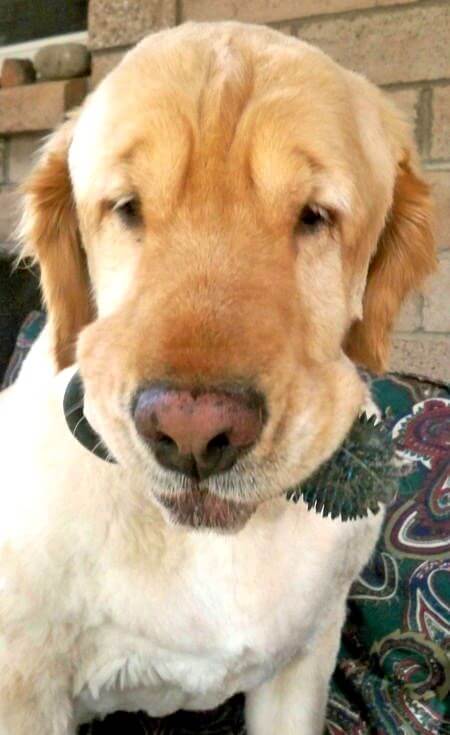 As with physical appearance, your dog can inherit the personality of either parent breed in any combination.

Both parent breeds have loving and loyal personalities and are known to be gentle dogs that do well in families with children.

Golden Retrievers are known for being trainable because they are obedient.

Bulldogs are also very trainable thanks to their easy-going temperament and willingness to please their owners.

While the Golden Retriever Bulldog mix is ​​likely to inherit the appealing personality traits of the parent breeds, it’s always a good idea to start training and socializing your pup early on.

Always use positive training methods when training your dog.

The Golden is more active than the Bulldog, but the mix requires moderate daily exercise, especially if it inherits the Bulldog’s tendency to gain weight.

Speaking of exercise, the bulldog’s head and body structure make many activities difficult (and even dangerous) for this breed.

Here’s what you should know.

English bulldogs suffer from a lack of genetic diversity.

The flat muzzle, called brachycephaly, leads to many chronic health problems caused by restricted airflow to the lungs.

The structure of the face also causes dental problems.

The skeletal structure of the bulldog’s body (called “chondrodysplasia”) can cause painful joint and spinal problems.

The exaggerated skin folds can lead to infections of the skin and eyes.

This is only a partial list of the numerous English Bulldog health problems.

Any potential owner of a Bulldog or Bulldog mix should be aware of the significant time and expense involved in properly grooming their dog.

While the Golden Retriever does not suffer from health problems caused by the bulldog’s physical constitution and genetics, they do have some hereditary health conditions that potential Golden Retriever Bulldog mix owners should be aware of.

Goldens may have hereditary “health problems” including dysplasia of the hip and elbow, some eye conditions (cataracts and pigmented “uveitis”) and heart disease (subvalvul% C3% A4re “aortic stenosis”).

You should also be aware of the increased risk of cancer in the Golden Retriever breed.

Experts say that 60% of all Goldens will develop cancer at some point in their life.

The most commonly affected cancers in Goldens are high-grade mast cell tumors, osteosarcoma, hemangiosarcoma, and lymphoma.

Researchers are conducting ongoing studies of cancer in this breed, including the genetic and environmental risk factors that may be involved.

Your Golden Retriever Bulldog mix can inherit health problems from either parent breed.

How can you make sure your pup is as healthy as possible?

Because English bulldog health is so compromised, consider choosing a different bulldog.
The American bulldog can be a good choice because the structure of the head and body is less extreme.

A mix of American Bulldog and Golden Retriever can be a healthier option when looking for a puppy.

Avoid buying from a pet store or online advertisement.

There are tests available that indicate many of the golden retriever’s genetic health problems.

Responsible growers will put their Goldens through their paces and deliver the results to customers.

While it is impossible to predict whether a puppy will develop cancer later, you can ask your breeder about a history of cancer in their golden breeding stock.

There are also genetic health tests for the bulldog.

Keep in mind, however, that if your mixed breed puppy inherits the bulldog’s head and body structure, your dog may be exposed to chronic health problems.

Your dog will depend on you for lifelong care.

Make sure you work with a responsible breeder to ensure that the puppy you choose is healthy.