The Great Pyrenees is the best friend of children and the ideal backyard patrolman that even the fastest mouse won’t slip past. Despite its elegant appearance, this snow-white brutal is unpretentious and moderately balanced, therefore it is able to happily live in a street nursery. The breed’s patience is also almost angelic: the Pyrenees agree to share their own possessions with any four-legged creatures, provided that the animals do not try to deprive them of their guardian status and do not pretend to be in charge. 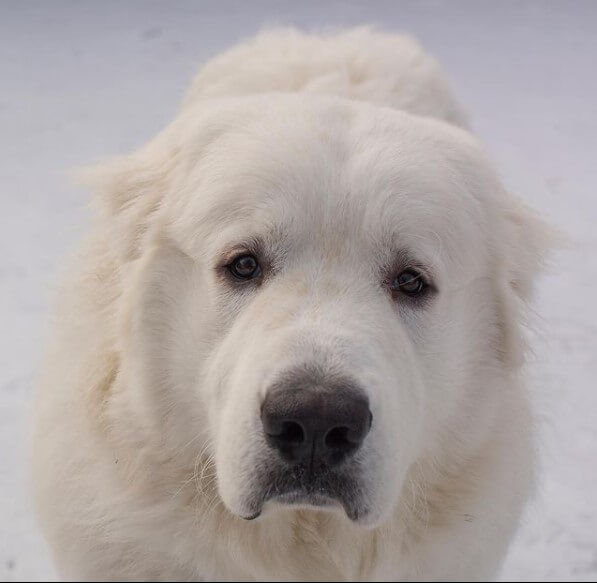 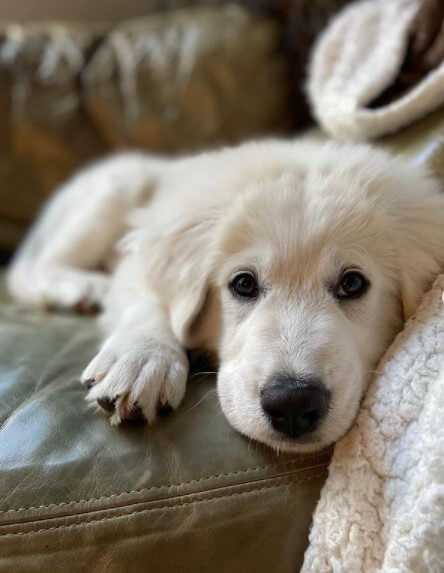 History of the Great Pyrenees Breed 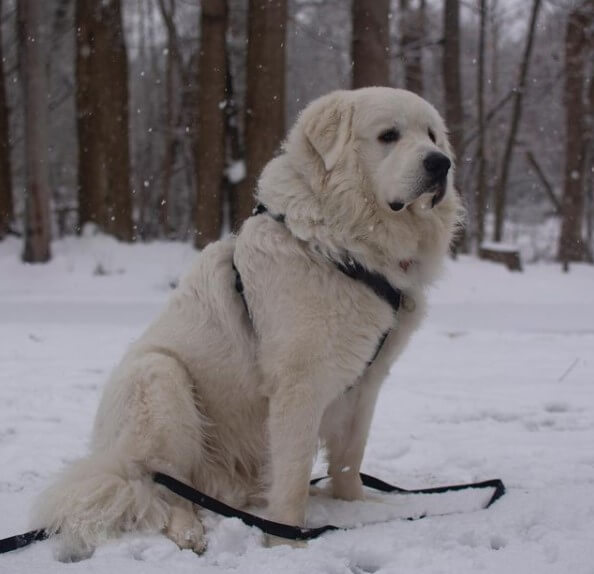 The genetic roots of the Great Pyrenees dogs are lost in the darkness of the centuries, so it is not possible to establish their relationship with existing and extinct breeds. According to one of the versions, the ancestors of the snow-white dogs were Tibetan Moloss-like dogs, which from ancient times were crossed with local producers in the French part of the Pyrenees. They were engaged in breeding experiments, mainly, shepherds, who needed massive, sensitive animals that could drive away hungry predators from the sheep, or even come into confrontation with them, therefore the nature of the ancestors of the Pyrenees was Nordic, and their habits were fierce.

The breed has been mentioned in printed sources since the XIV century. One of the first descriptions of the appearance of Great Pyrenees dogs belongs to the abbot of the French monastery Miguel Agustin, who at the same time explained why medieval breeders preferred individuals with white hair. According to the monk, the snow-white color helped the shepherd not to confuse the dog with the wolf. In addition, it was easier to search for dogs with light hair if, carried away by the pursuit of predators, they fought off the herd and got lost in the valleys.

By the end of the 17th century, the Great Pyrenees had moved away from pastoral affairs and began to guard feudal castles, which was facilitated by the increased public relations of the Madame de Maintenon breed. It was the favorite of Louis XIV who was the first to bring to Versailles the amusing puppies of the Pyrenean dog, who charmed the entire palace nobility, including the young Dauphin. In the 19th century, the population of predators in the mountainous regions of France declined, and the nobles’ quarters no longer needed a four-legged guard, so the need for the services of working dogs disappeared. However, the Pyrenees were not taken by surprise, since by that time they had successfully mastered a new niche – dog shows.

Before the preliminary standardization of the breed in 1923, its representatives were divided into two types: western and eastern. Westerners were distinguished by their pronounced Molossian appearance: they had large heads with pendulous lips and rounded ears, as well as a thin wavy hair of white or black color. Dogs from the eastern regions of the Pyrenees looked more intelligent than their relatives in the group. The muzzles of the animals were of an elongated-pointed type, like the ears, and the soft thick wool had a solid snow-white color. In the early 1930s, Pyrenean mountain dogs were bred in the United States, and in 1933 the breed was registered by the American Kennel Club. 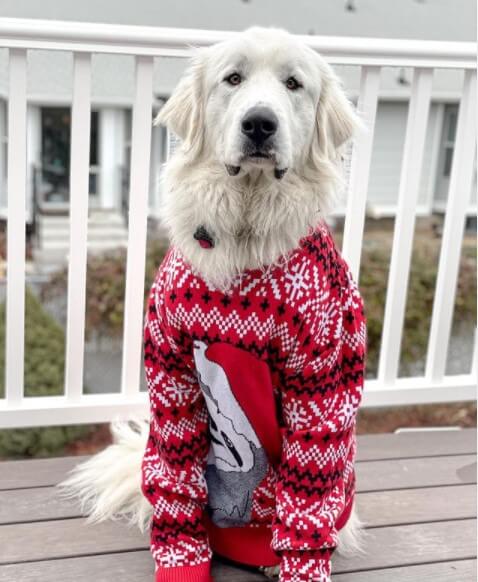 According to the type of physique, experts attribute the Pyrenees to wolf-Molossians, without disputing the fact that wolf features in the exterior of the breed are predominant. The growth of the average male Pyrenean mountain dog is 80 cm. The female dog is slightly lower and smaller – about 65-75 cm at the withers. These dogs also build up a decent muscle mass, so the 55 kg weight bar for the breed is not considered something surprising and prohibitive.

Dogs of solid white color look the most presentable, but the standard allows breeding of Pyrenean dogs of white-gray color (wolf or badger type), as well as with yellowish and light rusty spots at the root of the tail, on the head, and in the area of ​​the ears. 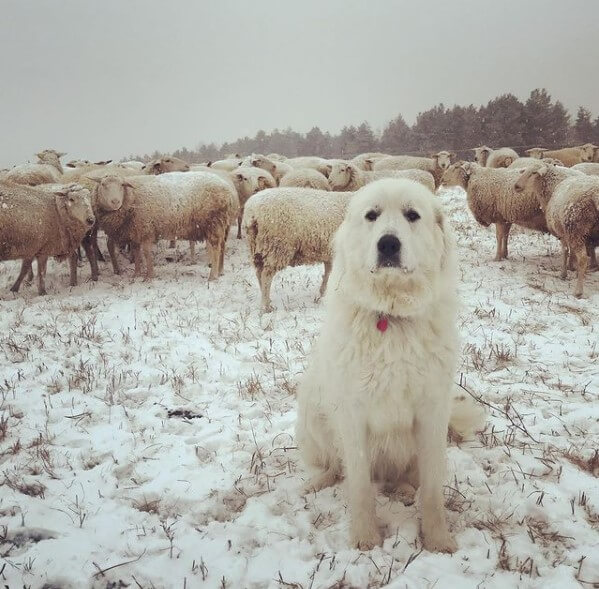 Today’s representatives of the breed are no longer the shepherds of “lost sheep souls”, although documented they continue to be working dogs with a superbly developed protective instinct. The modern generation of the Pyrenees is intelligent and sensitive companions and caretakers who regard the human family as their own flock, which allows animals to quickly and without unnecessary stress accept the rules of the game dictated by the owner. And shaggy giants also adore close physical contact, therefore, if you are looking for a pet that is ready not only to endure your and children’s hugs but also to come to sincere delight from them, then the Pyrenean mountain dog is the animal that you need.

Despite the emphatically brutal appearance, Pyrenees belong to breeds with a reduced level of aggression. This means that this “blonde” is able to scare half to death a fox or a ferret who has jumped into your yard, but he will not adhere to the same tactics with respect to two-legged troublemakers. At the same time, the breed does not favor strangers, which is understandable. Since ancient times, suspicious individuals have spun around the sheepfolds, ready to snatch a well-fed lamb, so the animal’s task was to confront such lovers of the free roast.

The Great Pyrenees are very fond of children, so they will not go into conflict with any baby, even if the latter is clearly abusing the good nature of the dog. Moreover, if a young mischievous person is in danger from another animal or person, the shaggy “guardian” will immediately react to this. Another feature of the breed is the hypertrophied territorial instinct, thanks to which the pet considers its territory not only the house in which he lives but also the places where, for example, the owner walks.

The breed is not averse to sharing its habitat with cats, other dogs, and especially with artiodactyls, who are in great need of a powerful protector. Even if you are a big fan of hamsters and other miniature pussies, you do not have to worry about their life and health. It would never occur to a Great Pyrenees dog to catch and eat even a begging rodent. But the shaggy giants are able to accidentally step with a massive paw on a gaping tiny lump, so be extremely vigilant, allowing the hamster to walk under the feet of a larger pet. 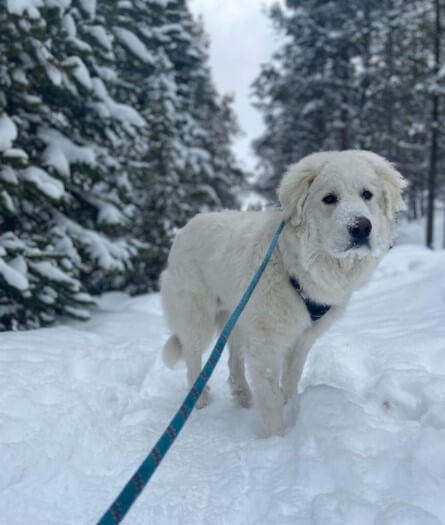 The difficulty of raising a breed lies in the desire of its representatives for independence and independence. Historically, Pyrenean mountain dogs were not trained, relying on their protective-territorial instincts, which could not but affect the nature of modern individuals. At the same time, one should not assume that the Pyrenees hardly absorb knowledge. On the contrary, they are understanding and understand almost immediately what is expected of them. But these comrades are in no hurry to fulfill the requirements, preferring to slightly annoy the owner with their feigned lack of understanding of the situation.

When organizing the training process of the Great Pyrenees, start with self-discipline and never approach the matter with a bad mood – the pet will quickly pick up annoying notes in his voice and will not follow commands.

The breed’s coat is capable of self-cleaning, so the dogs do not need frequent bathing. But do not expect that the dog living in the yard will look like a snow-white bunny. Dust particles and small debris will still stick to the hair, this state of affairs should be taken calmly. If you are looking for a neat glamorous handsome man, then, firstly, settle the pet in the house, and secondly, invest in cleansing shampoos that give the standard whiteness of the Pyrenean mountain dog fur coats, and also use conditioners that facilitate combing. Dogs shed about once a year, at which time frequent combing is required.

The eyes and ears of the Pyrenees do not need much care. Everything is standard here: to prevent sourness of the eyes, rubbing with chamomile infusion and cold unsweetened tea is ideal; gauze swabs moistened with chlorhexidine or veterinarian hygiene lotion are useful for removing wax deposits from the ear funnel. Dogs are clipped once a month. 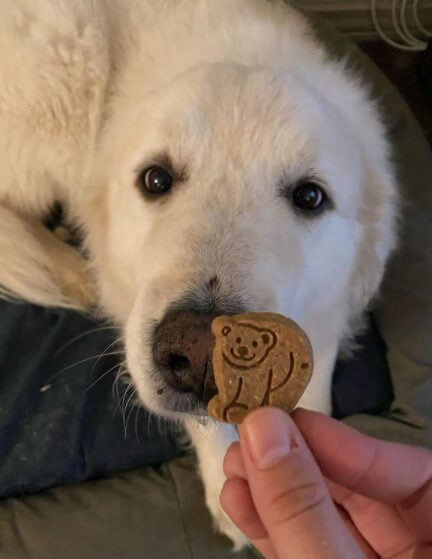 Two-thirds of the diet of an adult Pyrenees should be protein (meat, fish, cottage cheese, offal), and not heat-treated. Don’t worry, the animal’s body will easily digest any raw meat, except pork and fatty lamb. But the fat content of fish fillets is only good for Pyrenean mountain dogs. The only caveat is that it should be sea and well-frozen fish. The remaining third of the daily diet consists of vegetables, fruits, and cereals (oatmeal, buckwheat, rice). The latter is not always well absorbed by the pet’s digestion, but they help make the portion more satisfying.

Periodically, it is useful for the Pyrenees to gnaw a bone, but it should be spongy, not tubular bone with a sufficient amount of meat and certainly raw. Overfeeding Pyrenean dog puppies, as well as adults, is harmful. The breed is characterized by a slow metabolism, so its representatives quickly gain weight, which puts pressure on the joints. Remember, in a healthy and normally developing puppy, ribs should be well felt – this is considered a normal condition. 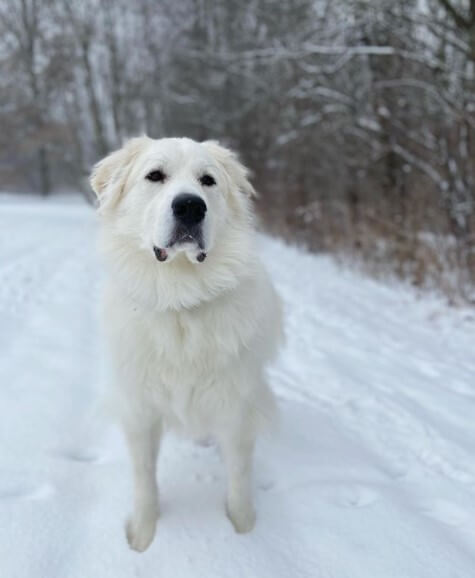 Like most large breeds, Pyrenees suffer from hereditary dysplasia of the elbow and hip joints, so it is very important to select healthy breeders for the planned mating. At the age of 4-6 months, dogs may experience dislocation of the patella, which is also a genetically determined disease. Not so common, however, there are eye problems, among which the most common are cataracts and volvulus. Particular attention should be paid to feeding the pet. Pyrenees dogs are prone to overeating, leading to such unpleasant phenomena as volvulus. 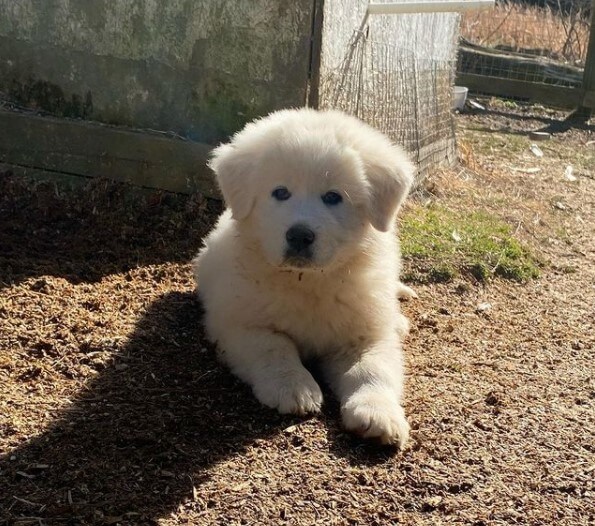