The Irish Setter is a charming, intelligent pet with a positive attitude towards life and others. Sometimes overly gullible, but able to insist on his own, this handsome chestnut is the type of pet in which you never tire of discovering unexpected qualities. Hunting with the Irish Setter is a topic worthy of a separate article. It is possible to return from the field without prey with a dog only in one single case – if not a single feathered creature was originally found on this field. 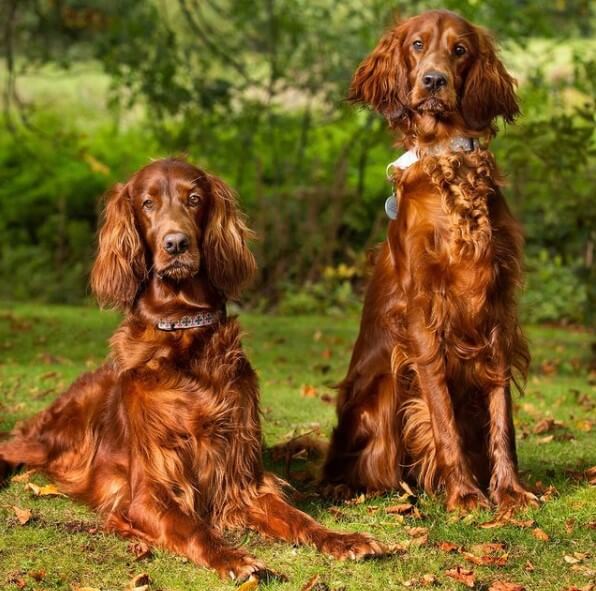 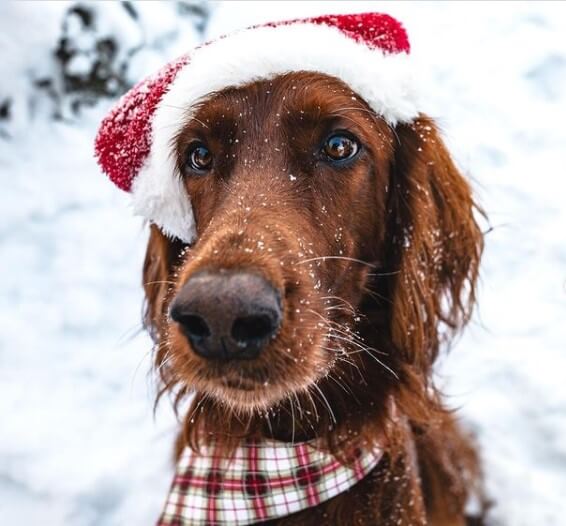 History of the Irish Setter Breed 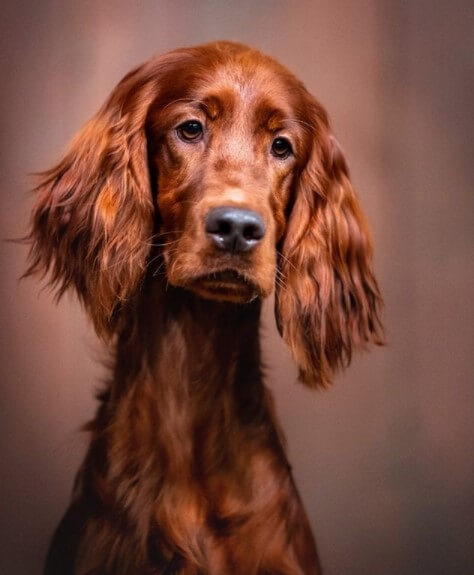 Despite the fact that the first mentions of a dog called a Setter are found in the literature of the 16th century, namely in the book “De Canibus Britannicus”, published in 1570, the Irish Setter as an independent breed was formed much later. This happened around the end of the 17th and beginning of the 18th century.

At this time, this breed was already widely known in its homeland and was actively used by hunters, constantly expanding the number of its adherents. Moreover, some Irish noblemen had their own nurseries, were engaged in breeding and selection, and also kept records telling in detail about crossing, types of colors, and other characteristic features, from which you can learn a lot about the process of development of the breed.

It must be said that in the 18th century, the Irish Setter did not have a solid red color, as it is today. This happened precisely as a result of selection. There is an assumption that hunters deliberately focused on such a color as monochromatic red in order to hide the dog as much as possible and make it more invisible in the forest thicket. After all, if the pet has white spots, it is much easier to see it.

The breed standard, approved on March 29, 1886, by the Irish Red Setter Club in Dublin, has remained virtually unchanged to this day. 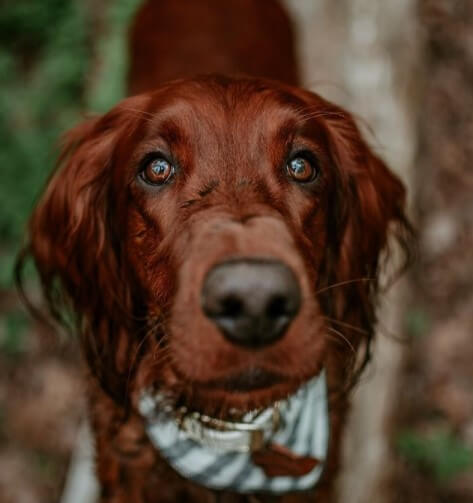 These are large dogs, athletic build, muscular, with a voluminous chest. The ears are drooping, the hair is long, the limbs are of medium length, the tail is longer than average, covered with hair. All dogs are red with no hint of black. Acceptable: Small white markings on the throat, chest, and forehead, or white spots on the muzzle and nose. 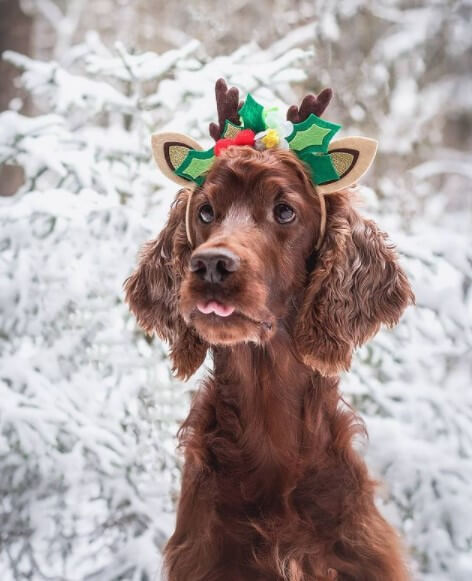 The Irish Setter is a dog whose internal battery operates in turbo mode from puppyhood to venerable age. And this applies not only to physical activity, but also emotions, which the breed has a strategic reserve. If for the whole day the dog has not been able to communicate with any living creature (if there is no human – the cat will do too), this is a serious reason for him to be upset.

Contact and friendly, Irish Setters are completely free of aggression. They don’t expect trickery from strangers and are generous to children, even if they are not very polite. However, it is a big mistake to perceive representatives of this breed as weak-willed. The Irish Setter can demonstrate tenacity and strength of character when needed. True, he will not do it aggressively, but gradually, using cunning techniques, and sometimes pretense.

Trying to dominate a person with redheads is not typical (there are also exceptions), but they prefer to make decisions in everyday life on their own.

Irish Red Setters are not averse to “play” and easily fit into the company of dogs. They will also accept the second dog that appears in the house with “outstretched paws” unless it is a dominant jealous type of Rottweiler or Boerboel. And yet, animals have the most sincere affection for humans, therefore, before acquiring an Irish Setter, think about whether you are ready to sacrifice a sofa rest in favor of morning runs in any weather and whether you will not get tired of that volume of feelings and emotions, which the dog considers it his duty to throw out on the owner. In particular, at home, dogs love to follow the owner, unobtrusively, but insistently demanding affection, hugs, and attention, and no strict commands or shouts can cure such pathological love. 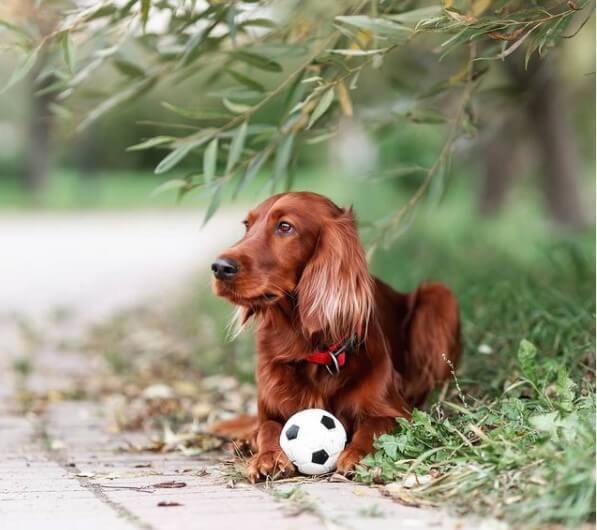 The Irish Red Setter is not without ability, although it does not enjoy a reputation for being easily trainable. The problem lies in the too lively temperament of the breed, which does not allow its representatives to concentrate on one object or activity for a long time. So, if you are planning to seriously engage in training your pet, get ready to smash your brains overdrawing up an individual training program that will not cause rejection in the dog.

3.5-8 months is the optimal age for training an Irish Setter puppy. By this time, the kids already know what a collective hierarchy is, so it is important to have time to let them understand who is the real owner of the house.

Psychologically, the “natives of the country of leprechauns” remain puppies for a long time: hyperactive, uncontrollable. You will have to come to terms with this fact, as punishments and an authoritarian style of communication are unacceptable for the breed and will only worsen the situation. But slightly adjusting the baby’s behavior is real. For example, physical activity is good at reducing the craving for adventures. A puppy who has walked up to exhaustion usually does not have the strength for leprosy and only one desire arises – to sleep in a corner.

Hunting with the Irish Setter 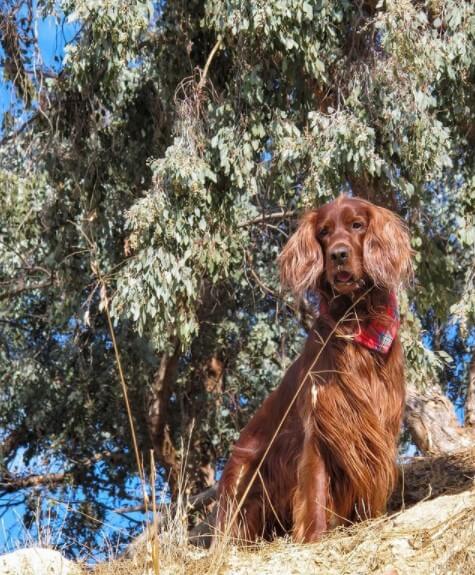 The main prey of the Irish Setter when hunting are partridges, quail, corncrake, black grouse, ducks, and woodcocks. The breed is relatively manageable, but not as patient as we would like. The dog works by relying mainly on intuition, using minimum hearing and sight.

As a result: in the course of long aimless wanderings in the fields, the four-legged hunter gets fewer impressions, therefore, he loses interest in work and switches to another type of activity. It is advisable to hunt with an Irish Setter only in proven places where feathered trophies necessarily live. If you are looking for a more consistent and focused scout, the English Setter is better. 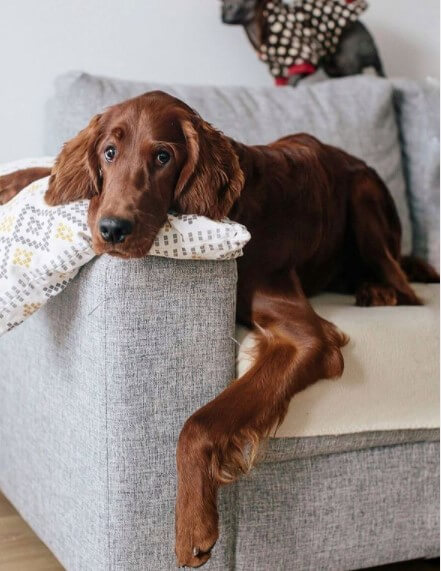 In the past, a purely hunting breed, the Irish Setter is now increasingly positioned as a companion dog, which did not hesitate to affect the conditions of detention. “Irish” no longer spend the night in barns and in the open air, and the care of their own wool is entrusted to the owners and groomers. The classic type of housing for a modern dog is a private house, preferably a country house, with a fenced yard. A more modest alternative is a comfortable bed in the apartment. Moreover, both options do not exclude intense physical activity, without which the four-legged “energizers” lose their taste for life and degrade.

The animals are traditionally walked twice a day. Each such promenade lasts at least an hour, and preferably an hour and a half. 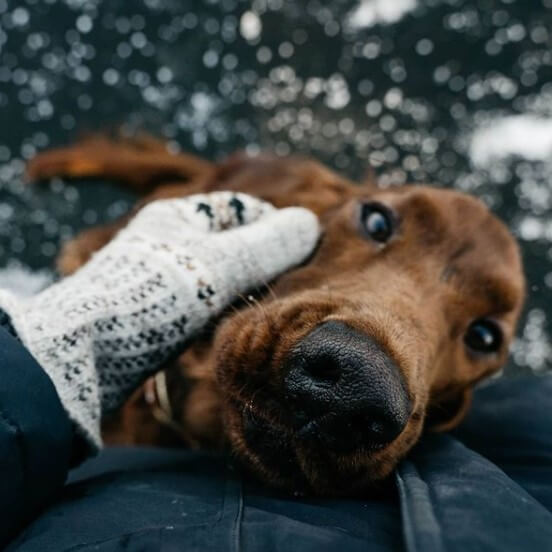 Get ready to work with Irish Setter fur a lot and often. First, because it is relatively long, especially in the abdomen, chest, and tail. Secondly, because the smooth, silky hair of Setters is constantly tied in knots and tangled, along the way clinging to the thorns and seeds of plants.

You need to bathe your dog relatively often: once every 7-10 days. Usually, the bathing process is preceded by the purchase of professional shampoos, conditioners, and natural oils to improve the structure of the coat.

Irish Red Setters are trimmed with thinning scissors to give them a more thoroughbred look. This is not a full-fledged haircut, but a light thinning of the decorating wool, so do not get carried away too much, but rather entrust the matter to professionals. During the off-season, when there is a lot of mud and puddles outside, it is more advisable to walk the dog in protective overalls, which can be ordered in the online store or sewn independently from waterproof fabric.

The animal’s ears, eyes, and teeth are cared for regularly. The hanging ears of the Irish Red Setter are poorly ventilated, therefore, in addition to cleaning, they will have to be artificially ventilated – take the ear cloth by the edges and wave them vigorously. Dogs’ claws are sheared 1-2 times a month: since the breed does not like to run on asphalt, preferring sandy paths and paths, they grind poorly. By the way, it is best to do a “pedicure” for an Irish Setter after a bath, when the claw is softened by steam and warm water. Of the required procedures, it is also worth mentioning brushing your teeth (at least a couple of times a week) and daily rubbing the mucous membranes of the eyes with herbal infusions (chamomile, tea). 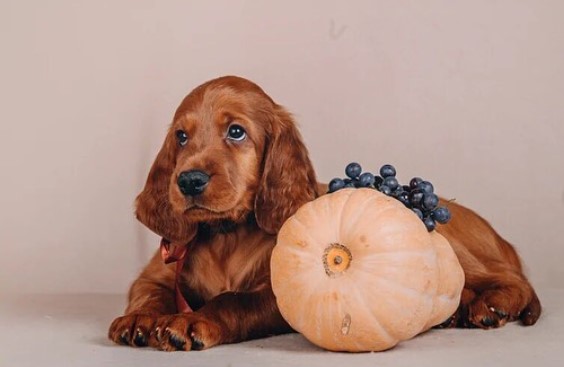 Start by purchasing a bowl holder for your pet. The Irish Setter is not a stocky breed, and bowing at every meal is elementarily harmful to her, there is a risk of getting a volvulus. The calorie content of the diet should be calculated with an eye to the level of a physical activity received by the dog. For example, athletes and representatives of hunting lines, who regularly travel to the field, need to be fed more densely than pets.

As for the natural menu for the breed, it is not particularly original. Meat (at the rate of 20 g per kilogram of animal weight), offal, fish fillet – these are the three products that make up its basis. Buckwheat and oatmeal are useful for Irish Setters. Vegetables and fruits are given to dogs only according to the season – and no Asian exotic that can provoke an allergy attack. Additionally, adults can be treated to an omelet of two chicken eggs, skimmed sour milk, and vegetable oil (about a teaspoon) plus vitamin supplements, selected and agreed with the veterinarian. 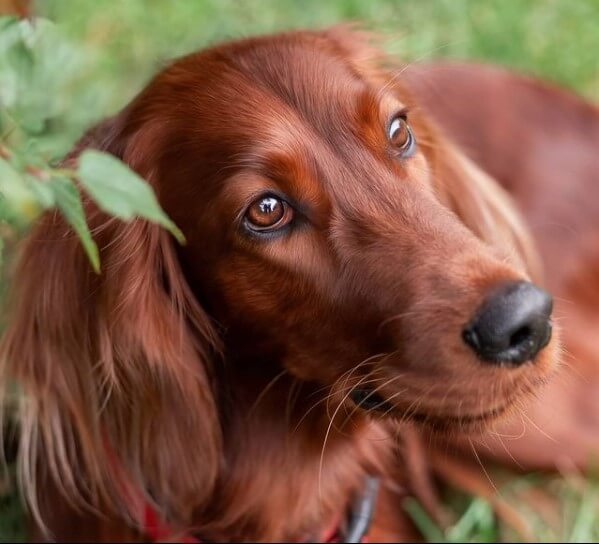 The health of a breed depends on how responsibly the owner of the kennel approaches her breeding. The same hereditary diseases may not manifest themselves in animals, the breeder of which does not skimp on genetic testing of the litter, scrupulously selects sires for mating, and does not abuse closely related crossing. Conversely, Irish Setters who are not very lucky with owner and heredity may show the following diseases:

At the beginning of the 20th century, European breeders went too far with inbreeding, as a result of which the “Irish” suffered for a long time from progressive retinal atrophy. It was possible to eradicate the defect only after the development of a system of tests that helped to identify the gene for blindness in the early stages. Ultimately, defective individuals were no longer allowed for breeding, which reduced the risk of inherited disease. 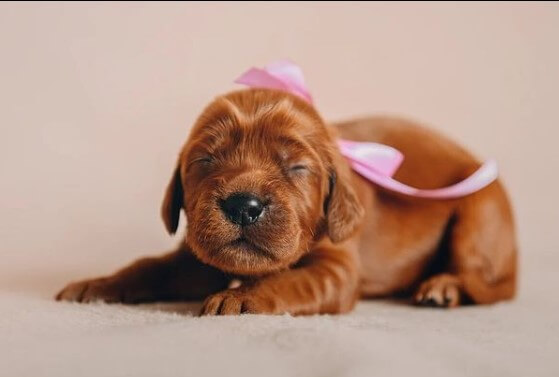