The Irish Wolfhound is a shaggy giant who will willingly share with you the secret of the purest and most sincere friendship. Born to a dangerous and challenging job, today this formidable giant has retired a bit without losing his athletic skills and hunting instincts. However, do not rush to be enchanted by the brutal and emphatically stern appearance of the Irish Wolfhound and do not try to view him as a fierce protector of his property. Under the guise of seriousness and feigned threat, there is an intelligent, sensitive, but completely not suspicious creature who will never allow himself to offend a person. 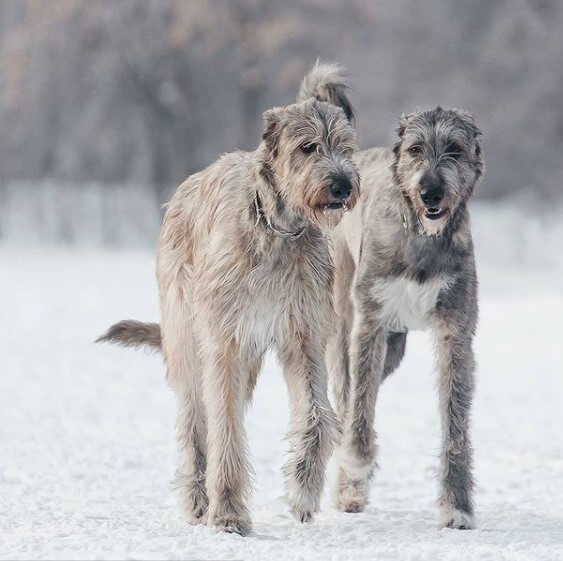 History of the Irish Wolfhound Breed 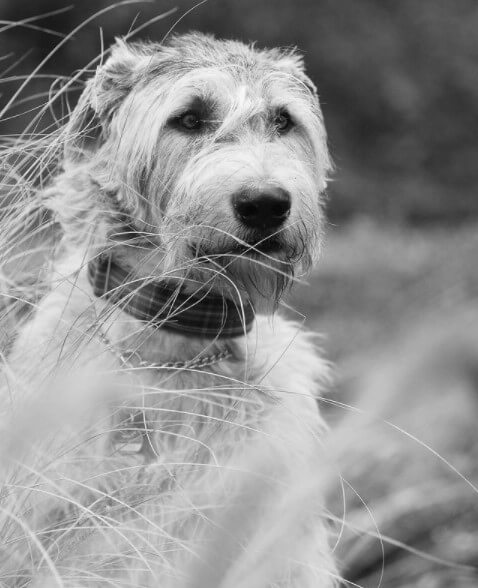 The Irish Wolfhound is the largest greyhound breed in pursuit of mobile prey and is also the tallest dog in the world. One of the first mentions of these animals dates back to 391 AD when the Roman consul Aurelius wrote about the “great surprise and delight” experienced by the inhabitants of Rome and the aristocracy at the sight of the seven Wolfhounds, which were brought by legionnaires from the campaign.

In Ireland, these dogs were highly valued for their fighting qualities, fearlessness, and tremendous strength. In battle, the Irish Wolfhound was used to knock a rider off a horse, moreover, this very rider often found himself on the ground with the horse. They hunted big game, Irish elk, wolf, and bear with them.

The laws of Ireland in the Middle Ages allowed only royal persons and nobles to have an Irish Wolfhound. Moreover, the number of dogs that could be kept directly depended on the height of the title held.

Irish lore says that folk hero Finn McCumhill had at least 500 Irish Wolfhounds, of which two were favorites – their names were Bran and Schiolan. They happened, it is said, due to magic. But a nobleman of the lower class could have no more than two dogs.

Irish Wolfhounds were often used as expensive gifts by nobles and kings. Moreover, this gift was often supplied in an expensive collar made of pure gold or silver. One of the most popular and beloved Irish stories, tells about a dog named Gellert, which was presented to Prince of Wales Llewelyn by the English king John in 1210.

One day, a dog protected the Prince of Wales’s son from a wolf by killing him while his father was out hunting. Returning from the hunt and seeing the dog in blood, he thought that the dog had killed his little son, and hacked him to death with a blow of the sword. However, he subsequently discovered the body of a wolf and an unharmed baby, which had been smeared with the blood of a dead predator. In honor of his loyal dog Gellert, the prince erected a memorial grave in Carnarvon, Wales – it can be seen today.

Large elk and wolf hunting in Ireland played a huge role in the decline of the Irish Wolfhound population. Since they were practically exterminated, the dogs simply ceased to breed, which is why the breed was even on the verge of extinction for some time.

The breed could have disappeared if Major Richardson had not paid attention to it. In the middle of the 19th century, he wrote a book where he suggested that the Irish Wolfhound and the mountain deer were of the same origin (today such a ridiculous assumption will cause laughter). He began breeding Irish Wolfhounds, basing his breeding program on the Glengarry reindeer herders, and achieved considerable success. Later, George Augustus Graham, another breeder, added Tibetan Mastiffs, Greyhounds, and Great Danes to the breeding program. 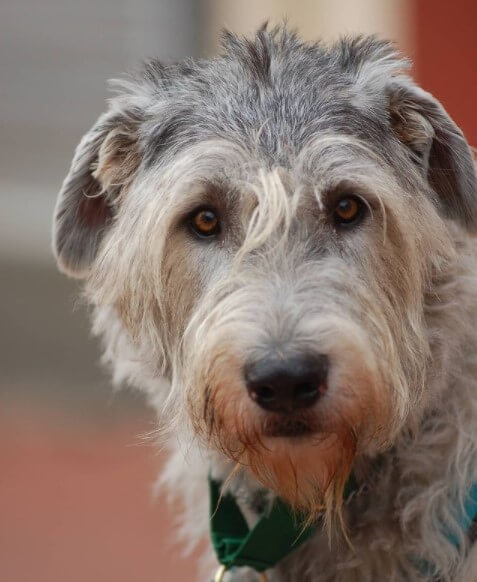 The Irish Wolfhound is a really huge breed. They are the tallest dogs in the world and some of the largest dogs on the planet. The limbs are long, the chest is clearly expressed, wide, voluminous. The physique is muscular, powerful. The transition from the forehead to the eyes is clearly pronounced on the head. The ears hang down the sides of the head, the tail is longer than average. 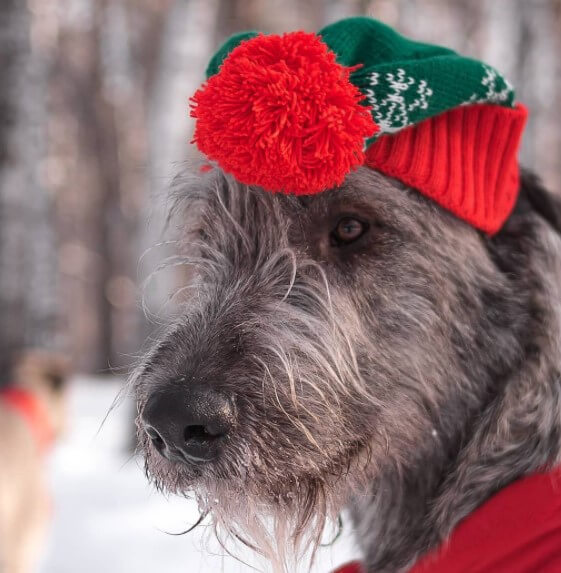 Despite its huge size and frightening appearance, the Irish Wolfhound is extremely affectionate, loyal, and loving with his family. Children will ride it like a pony, you can be sure of this, as your pet simply will not be able to resist the child’s charm.

He loves children very much, loves to play with them, and just adores being in the circle of children’s attention. However, children should not be allowed to ride a dog like a pony, as the joints of these animals, including the spine, will be injured. And given that the Irish Wolfhound breed, in principle, has many health problems and the skeleton, in particular, it is better to take care of their health.

By the way, they also live for a short time – only 6-8 years, maximum 11 but very rarely, and no more. The Irish Wolfhound breed of dog has an average level of energy, but this does not mean that he can lie at home on a pillow all day. This is absolutely not the case. They need an active lifestyle to maintain their large body in good shape since muscles and joints require movement and load, but the load is correct. In this regard, let us once again remember that children should not be allowed to ride on the back of an animal shouting “horse!”, But they will definitely try.

The Irish Wolfhound treats strangers normally, and if they are family friends, then seeing the location of the owners, the dog will treat them with friendliness. Their fighting nature can mostly be manifested when faced with another dog, although they may well be friends with dogs without conflict. Small pets can be perceived as potential prey, due to the rich past of the hunter, so cats should be introduced to them at an early age, and early socialization should be carried out.

The Irish Wolfhound breed is not very often used as a watchdog, as it is not very territorial and does not voice too actively. However, they may well be aware of themselves in this capacity and are quite capable of learning.

In addition, the huge size of the dog and its intimidating appearance can make an intruder change his mind. After all, it is simply unrealistic to remain unharmed after a fight with such an animal – Moreover, an attacker may simply remain a cripple. In any case, it is a loyal companion and reliable protector. 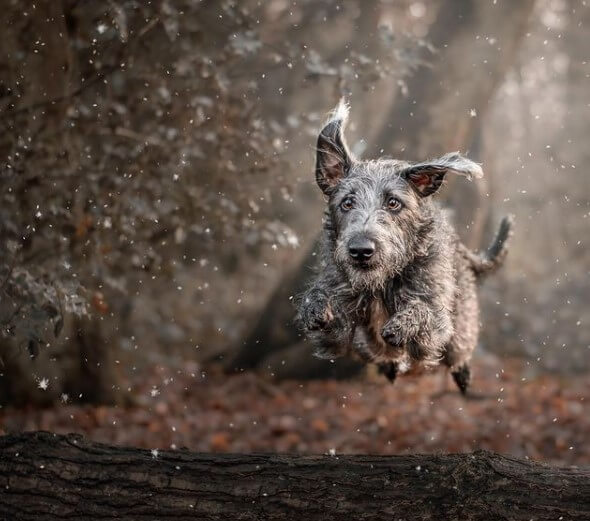 Dog breed Irish Wolfhound normally perceives the learning process and lends itself to education. They need physical activity, and the training process is an essential food for the mind.

You should be sure to teach your pet basic commands, and there should be a lot of emphasis on obedience in the face of distractions. This is necessary so that you can stop your dog in any conflict situation since a fight with any other dog (with rare exceptions) in the park will most likely end very badly for the enemy, if not fatal.

It cannot be said that the Irish Wolfhound is distinguished by special aggression and bloodthirstiness, but one should not discount his deep past as a hunter and fighter. 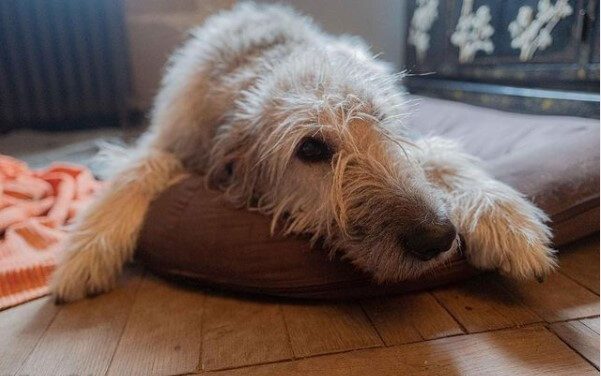 There is an opinion that the large Irish Wolfhounds are uncomfortable and bored in apartments and houses. In fact, the comfort of a pet depends entirely on the efforts of the owner. If you provide the dog with a spacious bed in a corner where household members will not cling to it with their feet and walk normally, there will be no difficulties in maintenance. Keep in mind that the Irish Wolfhound breed is contraindicated to lie on hard surfaces (sensitive joints + a very thin layer of subcutaneous fat), and therefore many owners allow the animals to lie on their own bed or sofa.

Keeping the Irish Wolfhound in an aviary is an extreme measure, this dog does not tolerate loneliness and needs constant close contact with a person. If you nevertheless decided to take such a step, do not leave your four-legged friend to winter in a hole, albeit insulated, but still. Firstly, it is cruel, and secondly, it harms the health of the pet. 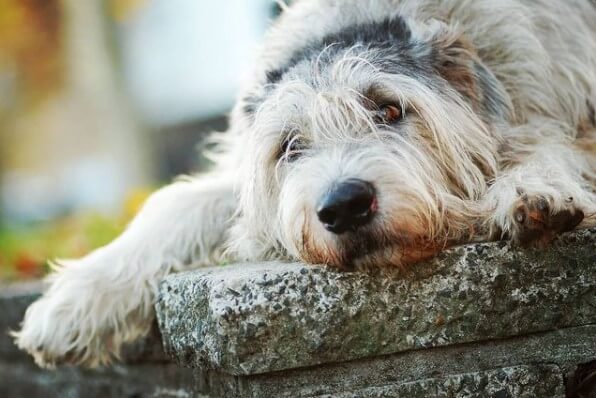 Coarse curly coats need to be brushed once or twice a week. While walking in a park or forest belt, the Irish Wolfhound can enthusiastically climb the bushes, and therefore after a walk, be sure to examine him for ticks.

Ears need to be cleaned 2-3 times a week, eyes daily. The claws are trimmed three times a month, the animal is bathed once a week. 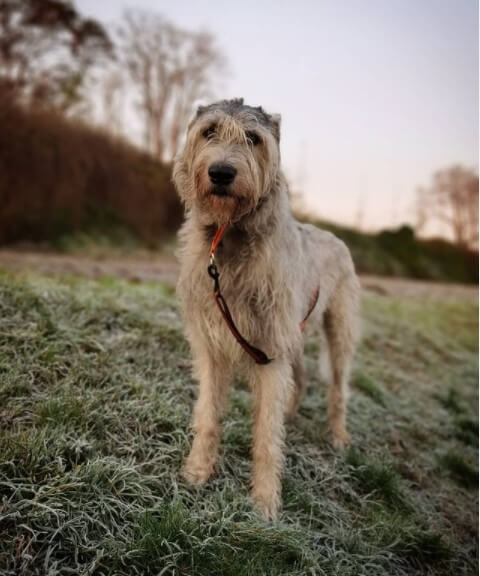 For walking the Irish Wolfhound, it is more advisable to use a belt leash. Adult dogs are walked twice a day for an average of an hour (10-minute trips to the toilet do not count), puppies are taken out to “ventilate” every 3 hours for 10-15 minutes for up to six months. Remember, Irish Wolfhounds are energetic guys, but far from supermen, so overload is harmful to them.

Let your dog run freely if you are not walking near the motorway and there are no live provocateurs in the form of stray cats in the field of view. Keep in mind that for up to a year, Irish Wolfhounds are prohibited from jumping, so you can start practicing acrobatic numbers in the fresh air only when the pet’s skeletal system is strengthened.

If you are walking the Irish Wolfhound outside the city, in groves and copses, take care of protection from ectoparasites, and do not be lazy when you come home to examine your pet’s armpits, withers, and groin areas. If the “enemy” is found, remove it from the body of the animal and observe the behavior of your ward for the next couple of days – getting infected with piroplasmosis from a tick is easy for a dog. 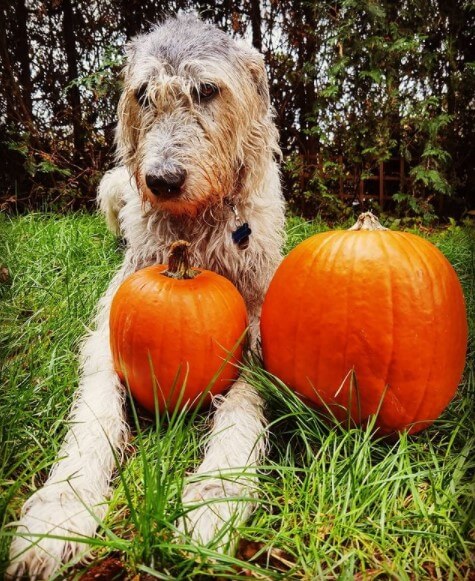 Considering that the diet of a large dog should be based on lean meat or super-premium and holistic “drying”, Irish Wolfhounds are not cheap for their owners. Of course, meat protein can be periodically replaced with fish protein, as well as by-products, but such experiments also involve decent spending. As for cereals, the best options for the “Irish” will be buckwheat, rice, and oatmeal. At the same time, the share of cereal products in a pet’s bowl should not exceed ⅓ portions, the rest ⅔ is occupied by meat. 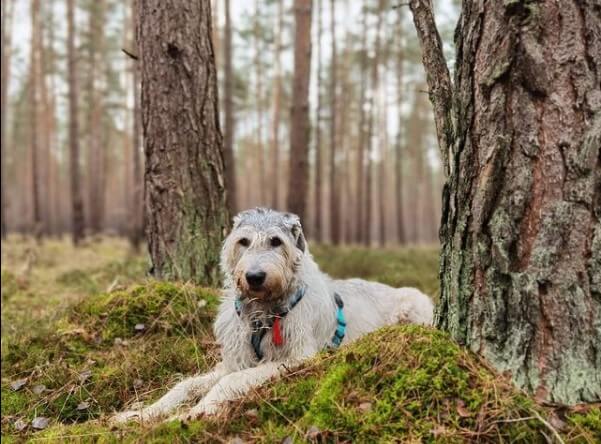 Indomitable on the outside, inside, the Irish Wolfhounds remain rather fragile creatures with a short life expectancy (only 6-8, rarely 11 years) and a predisposition to a wide range of diseases.

Ailments of representatives of this breed: 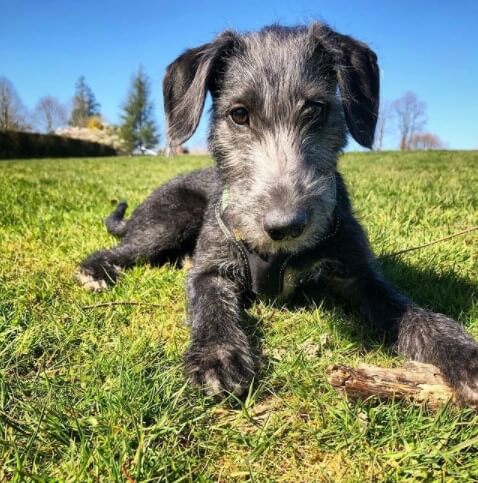