“Kazoku-Neko” – that’s the Japanese name of the Japanese Bobtail. Translated, it means “family cat” and thus describes the outstanding characteristic of the pedigree cat: It is friendly, intelligent, and likes to be in the company of its people. In its country of origin, it is also valued as a good luck charm. The sociable animal only lacks one thing: the typical long cattail. However, this has different backgrounds than, for example, with the Manx. Find out everything you need to know about the lovable Asian!

A “bobtail” is an animal with a “bobbed tail”, i.e. a shortened tail. The Bobtail is well known as a dog – but there are also velvet paws with this feature. The Japanese Bobtail is a peaceful, sociable, in short: a nice cat. She integrates harmoniously into a household and takes part in family life so actively that one might wonder whether she is aware that she herself is not actually a human being. Thanks to her balance, she isn’t easily upset by anything. She encounters new people and things with interest and curiosity.

The Japanese Bobtail has a low instinct for movement by cat standards and is therefore also suitable as a pet in smaller living conditions. However, the prerequisite is the possibility for them to withdraw to a separate room if necessary. Like all cats, the Japanese Bobtail should not be kept as a solitary cat. As a partner cat, you should ideally give it a conspecific with a similar character for the company. Dogs are usually graciously ignored by her. 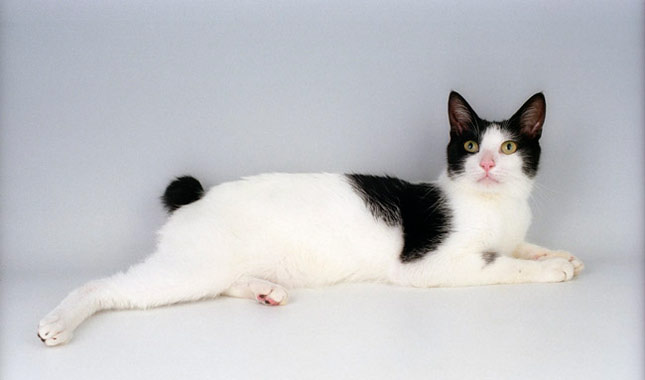 Even if she doesn’t tend to romp around explosively, your Japanese Bobtail needs sufficient climbing and hiding places as well as suggestions for playing together. The clever fur noses particularly like activities that require brains, for example challenging toys. The stub-tailed cat even learns little tricks and is retrieved quickly.

The communication and attention needs of the social Japanese Bobtail are great: The pedigree cats are considered to be extremely talkative and “chat” excited.

If you own a Japanese Bobtail, you should make sure that you never leave your cat alone for long, despite the fact that a second cat is present, due to its human connection – otherwise, it will express its displeasure loudly. In a single household with a regularly absent owner, the Japanese Bobtail would be out of place. She fits much better into a family where one member is always at home. She is also proving to be an ideal roommate for active seniors who have enough time to play with her.

Keeping and caring for the Japanese Bobtail

The Japanese Bobtail stands out due to its robust health. No known hereditary diseases result from the breed-typical short tail. Caring for them turns out to be uncomplicated: depending on whether you have a long-haired or short-haired specimen, more frequent brushing may be necessary.

The Japanese short-tailed cat also proves to be undemanding when it comes to the bowl: Rely on high-quality food with a high meat content and little fat, sugar and grain. However, be careful not to let your Japanese Bobtail get fat – because they are less active overall than other breeds, their energy needs are lower.

The life expectancy of the pedigree cat is between twelve and 16 years, the acquisition costs between 800 and 1,200 euros.

Colors of the Japanese Bobtail

The Japanese Bobtail presents itself as a colorful breed: all coat colors are present, according to breed standards everything is allowed except lilac, chocolate, or cinnamon and color point. The basic color of the Japanese Bobtail is mostly white with other colored areas, mostly red or black.

Three-colored specimens are particularly popular: in the optics as a “three-fur cat” (Japanese: mike-Neko), they are considered a “lucky cat”. In fact, the mechanical waving cat you see at the entrance of Asian restaurants and shops, for example, is modeled after a Japanese bobtail.

The Japanese Bobtail comes in both long and short hair versions. In both hair lengths, the Japanese bobcat is not prone to excessive shedding.

The History of the Japanese Bobtail

According to a Japanese legend, a cat once slept too close to the fire, causing its tail to burn. The animal ran around in a panic and reduced the entire area to rubble. The Tenno – the Emperor of Japan – was understandably indignant and, as punishment, ordered all cats’ tails to be docked.

However, this story is not that far from reality: In earlier times in China and Japan, cats performed the important task of keeping the greenhouses in which silkworms were bred free of rodents and birds. The cats often caused property damage with their tails, and the battered caterpillar webs were then no longer usable for silk production. The pragmatic, but anything but the animal-friendly solution at the time consisted of docking the cat’s tail.

However, short-tailed or tailless cats occur again and again due to natural gene mutations. Such specimens with a naturally short tail were valuable and therefore exclusive and coveted diplomatic gifts in aristocratic circles. They have been documented on art objects in Asia since the 6th century.

In Japan, it was recognized that breeding short-tailed cats as possible. Since the gene responsible for the stumpy tails is inherited recessively, both parents must be short-tailed. After the Japanese authorities had decreed in 1602 to release all velvet paws that had previously been reserved for the nobility, the short-tailed cat became a “street cat” and continued to reproduce wildly.

The snub-tailed cat was mentioned in a travelogue by the researcher Engelbert Kampfer from around 1700: The German remarked with surprise even then that the striking cat preferred to be carried around and petted than to hunt mice – from his perspective a real curiosity.

In the 1960s, American soldiers stationed in Japan became aware of the bobtail cats. Towards the end of the decade, breeder Elizabeth Freret was able to import the first three specimens into the USA. The Japanese Bobtail has been recognized by the American Cat Fanciers’ Association (CFA) since 1965 and by the FIFe (Fédération Internationale Féline) since 1990. 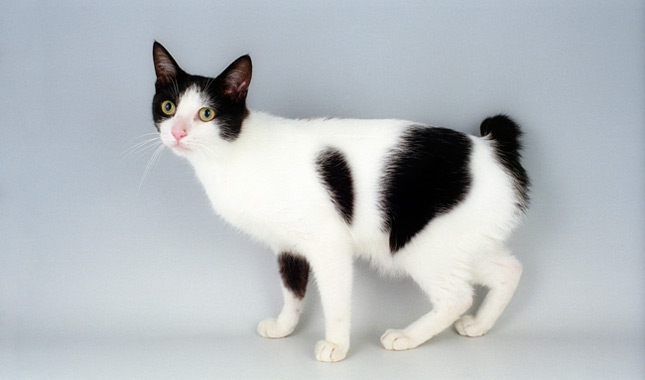 Incidentally, different genes are responsible for the “tail shape” of the Japanese Bobtail than, for example, of the Manx. While a limited gene pool essentially favored the establishment of the mutation in this cat, systematic breeding was the focus in Japan, in which the characteristic “shortened tail” was worked out. Unlike the Manx, however, the mutation in question has no effect on the skeleton.

In Germany, the Japanese stub-tailed cat is comparatively unknown.

Peculiarities of the Japanese Bobtail

Unlike the genetically tailless Manx, the Japanese Bobtail has a tail that can be curved or kinked. The exact shape of the tail is unique to each individual animal. The “unrolled” tail length is ten to 13 centimeters, in the actual extent, it is five to eight centimeters. Some compare this tail to a flower – hence the alternative name “chrysanthemum cat”.

Since this endogenous “balancing pole” cannot be used as a normal long tail, the Japanese Bobtail has a concise, hopping gait. Also untypical for cats is their fascination with water.