One of the most fascinating experiences of keeping hamsters is certainly the birth and the associated rearing of the little rodent babies.

By nature, hamsters are more likely to be irritated by conspecifics, whether they are same-sex competitors or not. Anyone who decides to breed the small rodents should not only have enough space but also have specialist knowledge. In addition, the question of where the little hamster children will go when they are big enough to say goodbye to their mother should be clarified in advance. But every now and then it also happens that you got a pregnant female from the breeder or from the pet shop. The previously rather strong-looking female, who eats with an incredibly good appetite, turns out one day to be a pregnant hamster lady. Sometimes you only notice it when you hear a soft beeping and squeaking from the sleeping hut. No reason to get excited, because raising the small, initially pink babies is not that difficult. 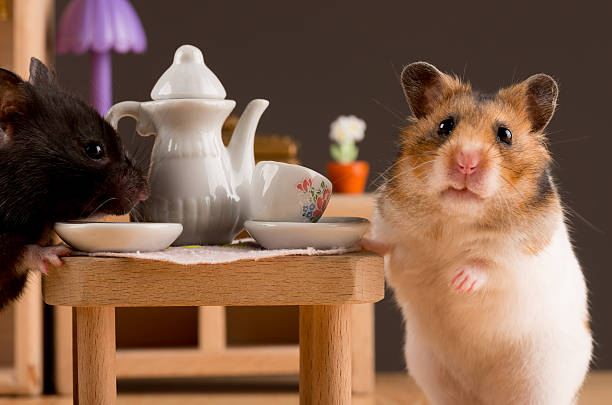 Hamsters are usually sexually mature at four to seven weeks. The female is then in the reproductive mood for about ten hours every four to five days. In the wild, the males run from burrow to burrow from March to November, checking which female hamster is ready to mate. The wedding, whether in the wild or in the hamster cage, is not very romantic. The groom first follows his bride to then sniff her tail region. Because that’s how he notices whether the female is ready. The mating act can last all night for small rodents.

Immediately after mating, the female hamster chases the male out of her territory. You should then remove the male from the cage at the latest because the female hamster’s attacks can be so severe that her “partner” can be life-threateningly injured. In the case of the short-tailed dwarf hamsters, however, the males are tolerated after mating. In some cases, Roborovsky and Djungarian hamsters even take part in raising offspring.

Since you usually don’t get to see the mating act at all, you can only be sure that the female is pregnant when the tummy is slowly rounding out, more supplies are being collected and the sleeping hut is being further expanded. Your female hamster will be very grateful for the soft and fluffy nesting material. Just put some unscented tissues in the cage. Now you rarely get to see your lady hamster – often only when she is fetching food supplies again. Don’t single out the mom-to-be anymore during her gestation period.

Depending on the hamster species, between four and ten young are born after a gestation period of two and a half to three weeks. The still naked and blind hamster babies are suckled, warmed, and cleaned by their mother for the first few days. Therefore, she will rarely leave the nest during this time. If you listen carefully, you might be able to hear a faint squeak coming from the sleeping pod. After the hamster lady has given up, you should not completely clean the cage for the time being. Just remove contaminated litter in the toilet corner and clean the food bowls and drinking bottles.

Nutrition of the hamster mother

During pregnancy and after birth, the female hamster needs a lot of protein. Therefore, give her some yogurt, low-fat quark, cottage cheese, or insects, e.g. mealworms, every day. Dog biscuits are also popular at this time. Juice food gives the expectant or young mother a lot of energy. So give her a bunch of grapes or some candy corn every now and then. Overall, the Hamsterd-Dme is now eating a lot more than usual. Also, make sure that she has fresh water in her drinking bottle every day.

Half a day after birth you should briefly check the nest. However, this is only possible if you have a sleeping cabin with a removable roof. To do this, lure the mother hamster out of the nest with a treat. But never put your hand in the nest, even if the female hamster knows your smell! If one of the babies is dead, you must remove it. However, be particularly careful when doing this, because if the hamster’s mother thinks her little ones are in danger, it can even happen that she eats them. This is not a behavioral disorder, but a natural protective mechanism.

After about five days, the baby hamster’s fur begins to grow and the little ones slowly begin to nibble on the mother hamster’s food. Sometimes it can happen that a little one stumbles out of the nest and gets lost. But then the mother rushes over and carries the baby back into the nest. The eyes only open after about two weeks. And the coloring is only really pronounced at this point. At 17 days, the chicks make their first trips and games outside the nest. By the time they are three weeks old, they are fully independent. After four to six weeks, the young rodents can move into a new home. In any case, at this time they should be separated by sex and placed in separate cages. Particularly precocious juveniles could already be sexually mature. 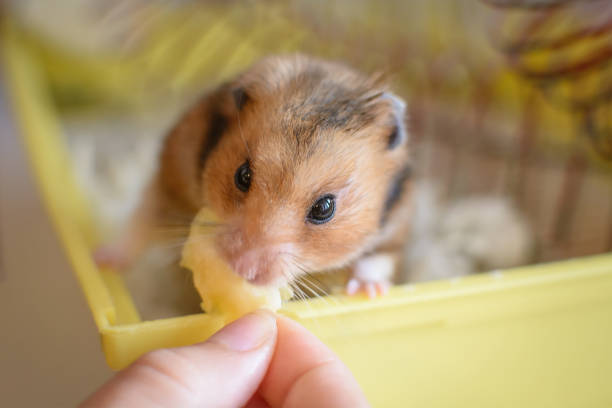 It is fairly easy to determine the sex of hamsters that have just fledged. To do this, take each of the little ones in your hand and turn them onto their backs. Then look at the distance between the two genital openings. If they are far apart, then it is a male. However, if they are very close together, you are holding a female.