Old English Sheepdog is a large, hardy dog, in the past – a shepherd, and today – an excellent companion, good-natured and active friend. The first thing that catches your eye when meeting with a dog of this breed is an unusual, almost completely absent tail and amazing, thick and fluffy coat. 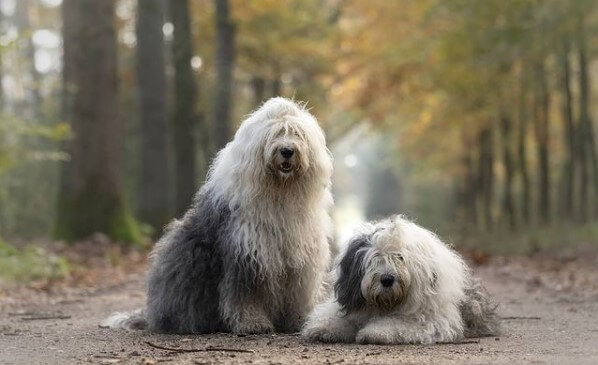 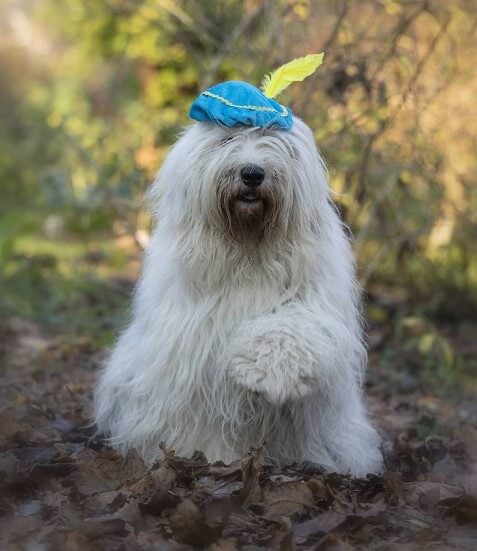 It is known that this breed appeared in the counties of Devon and Somerset in the west of England.

Most dog handlers are sure that the dog on the Gainsborough painting, painted in 1771, belongs to the ancestors of the Old English Sheepdog. It is very likely that among their ancestors were the Bearded Collies and the South Russian Shepherd Dogs.

In 1873, the first specimens were exhibited in England under the name “shepherd dog”. They immediately attracted attention due to their unusual appearance.

In 1880, dogs were brought to the United States, and after 5 years, half of the ten richest families in America had these pets. The cream of society constantly held exhibitions and competitions for their favorites. 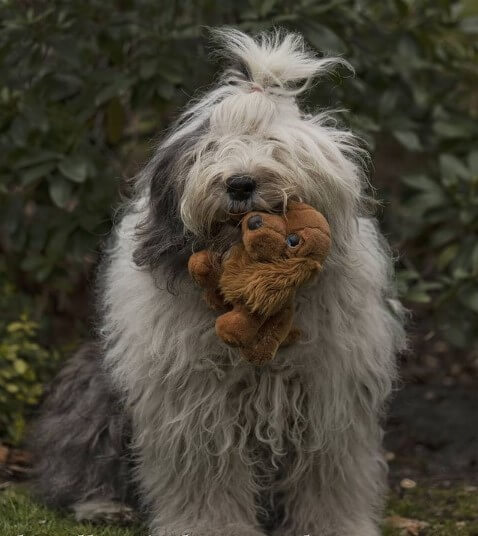 Old English Sheepdogs are large, sturdy dogs that stand out from others with their long and dense coat. Eyes dark, preferably black edging around eyes. The blue color in both eyes is allowed. Eyes of different colors are a disqualifying factor.

Color: all shades of gray, blue, marbled blue with white markings. The body and sacrum are monochromatic with white “socks”. Markings in the area of ​​solid color are undesirable. The head, neck, chest, and abdomen must be white. Brownish or beige coloration lowers the score. Old English Sheepdogs are often seen in Hollywood films, both in movies and in cartoons. The character of this breed is as diverse as the character of Hollywood stars. Some can be very outgoing, while others are stiff, some are funny, and some are serious. A common feature is that all herding dog is infinitely loyal to their owner. Old English  Sheepdogs make excellent guard dogs, as they sound the alarm quickly and in a timely manner. Bobtails love to play with children, they are patient and kind. These dogs are suitable for experienced dog breeders who lead an active lifestyle.

The breed has appeared in such cartoons: 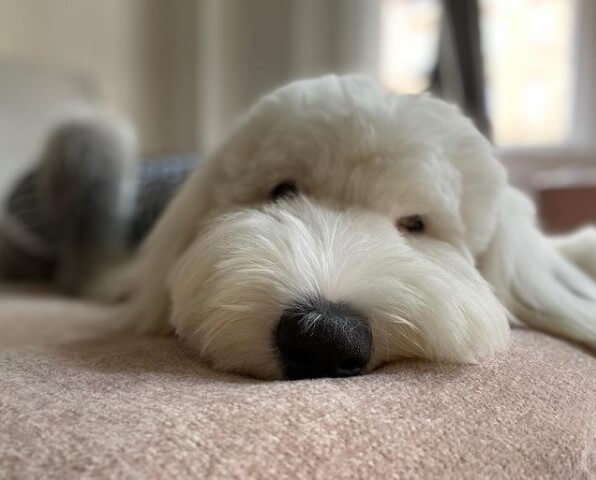 The Bobtail or Old English Sheepdog is one of those dog breeds that care for their coat causes a lot of trouble even for experienced dog breeders. The owner of the Bobtail will have to spend three to four hours every week to keep the coat healthy and well-groomed. These dogs shed very much, so it is necessary to thoroughly comb out the coat with a special brush every day. This will remove dead hair in a timely manner and prevent hair from pilling and tangling.

All Old English Sheepdogs are prone to excessive salivation, which can lead to discoloration of the coat around the mouth. Therefore, it is necessary to wash the dog several times a day, especially after eating. The back of the dog’s body also requires careful washing. If you neglect this requirement, then patches of dirt will form in the wool, which is not so easy to remove.

When it comes to bathing, many owners choose to hire a professional groomer. It is necessary to bathe the dog often, about several times a month or as it gets dirty, and they get dirty very quickly.

In the hot summer months, it will be useful to have a short haircut. Besides the fact that this will somewhat simplify the care of the coat, it will also protect the pet from overheating.

Bobtail ears should be checked regularly for sulfur contamination, inflammation, and infections. The ears are treated with a special solution prescribed by a veterinarian. Ears can be cleaned with a cotton swab, but under no circumstances should a cotton swab be used when directly cleaning the ear canal.

Weekly brushing is a must to prevent dental problems and keep your dog breathing fresh. Don’t forget to trim your nails every month. 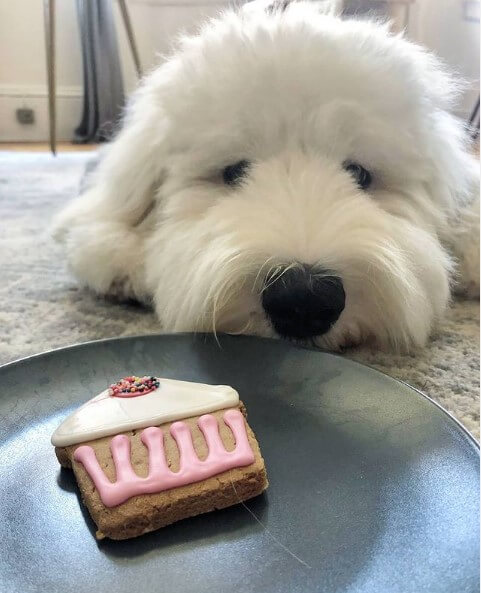 Your dog is not picky about food, but it is important that he gets all the necessary vitamins and minerals that will maintain a healthy hairline. The menu includes the following products:

Special foods can be offered to the puppy to ensure that he receives all the necessary vitamins and minerals. In the future, dry food should be given in parallel with the main food, but it cannot replace homemade food.

The breed often suffers from food allergies. This problem is solved by a one-time selection of the correct diet, which is then followed. You should not worry about the lack of variety: the Bobtail will eat everything that is given to him with equal pleasure, if only it will replenish the spent energy. 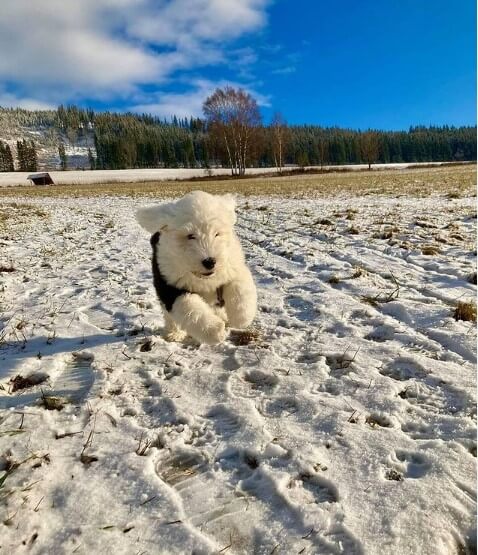 Old English Sheepdogs, by virtue of their shepherd nature, are quite independent. In terms of training, these dogs are not a “gift”. They carry out any commands as long as they like it. A dog should be trained by a person who knows how to maintain leadership qualities in a relationship with the dog. It is very important not to give your pet indulgences. If the Bobtail feels that he is being led, then he will simply manipulate it. Therefore, during training and learning, be persistent and confident. 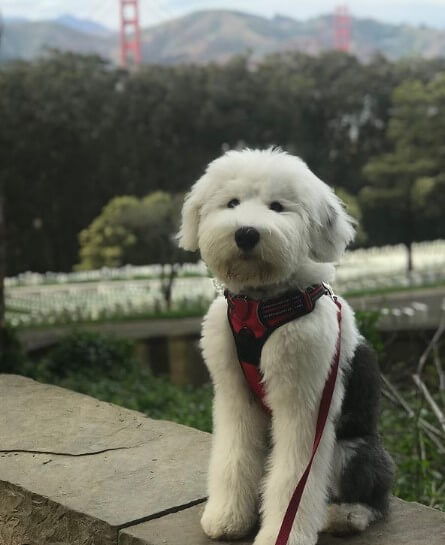 The main cause of death for bobtails is cancer. 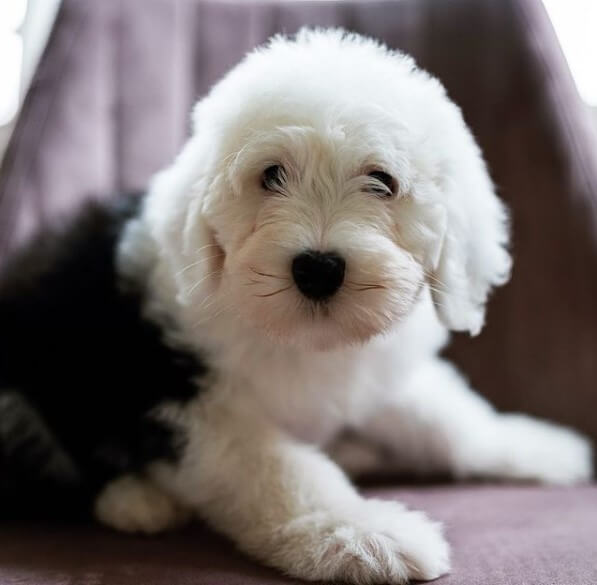 The Old English Sheepdog puppy looks like a real and very cute fluffy lump. Almost all of them are born black and white, but then the color will become lighter and change. The eyes of the puppies are either brown or of different colors (blue and brown). If a baby was born blue-eyed, it is unlikely that he will have to go to exhibitions, but otherwise, his qualities do not deteriorate in any way.

How to Choose a Name 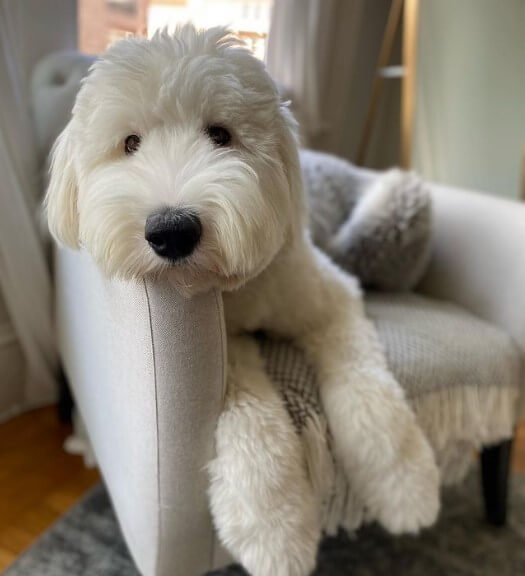 Old English Sheepdog- an intelligent dog and will easily remember his name. It should be noted that when buying a thoroughbred puppy, you need to immediately receive documents in which his name is written. Puppies from the same litter are traditionally named with one letter, but within this letter, you can tell the breeder which name to write in the documents.

Initially in England, wanting to emphasize with the names that the breed was already recognized outside the herding farms, depending on gender, they began to add “Sir” or “Lady”. And the very first Bobtails admitted to exhibitions were named Bob, Jocky, Sir Raradon, Sir Guy, Roose, and Margery. 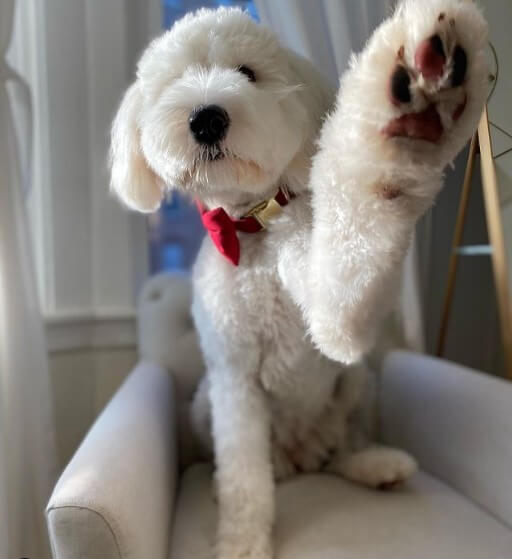