Wondering if a Bichon Poodle Puppy is Right for You?

Welcome to our complete guide to the Bichon Poodle mix! This guide will tell you everything you need to know about this adorable breed.

The Bichon Poodle Mix aims to combine the intelligent, proud traits of the poodle with the more playful, curious Bichon Frize.

The result is a charming, affectionate, and adorable breed known as the Bich Poo, Poochon, or simply the Bichon Frize Poodle Mix.

This guide is for potential owners of this intelligent breed as well as current owners who want to learn more about their pets.

There is a lot to know about this unique breed – starting with the fact that it is a first-generation cross.

So let’s first address the elephant in the room – the controversy surrounding so-called designer dogs. 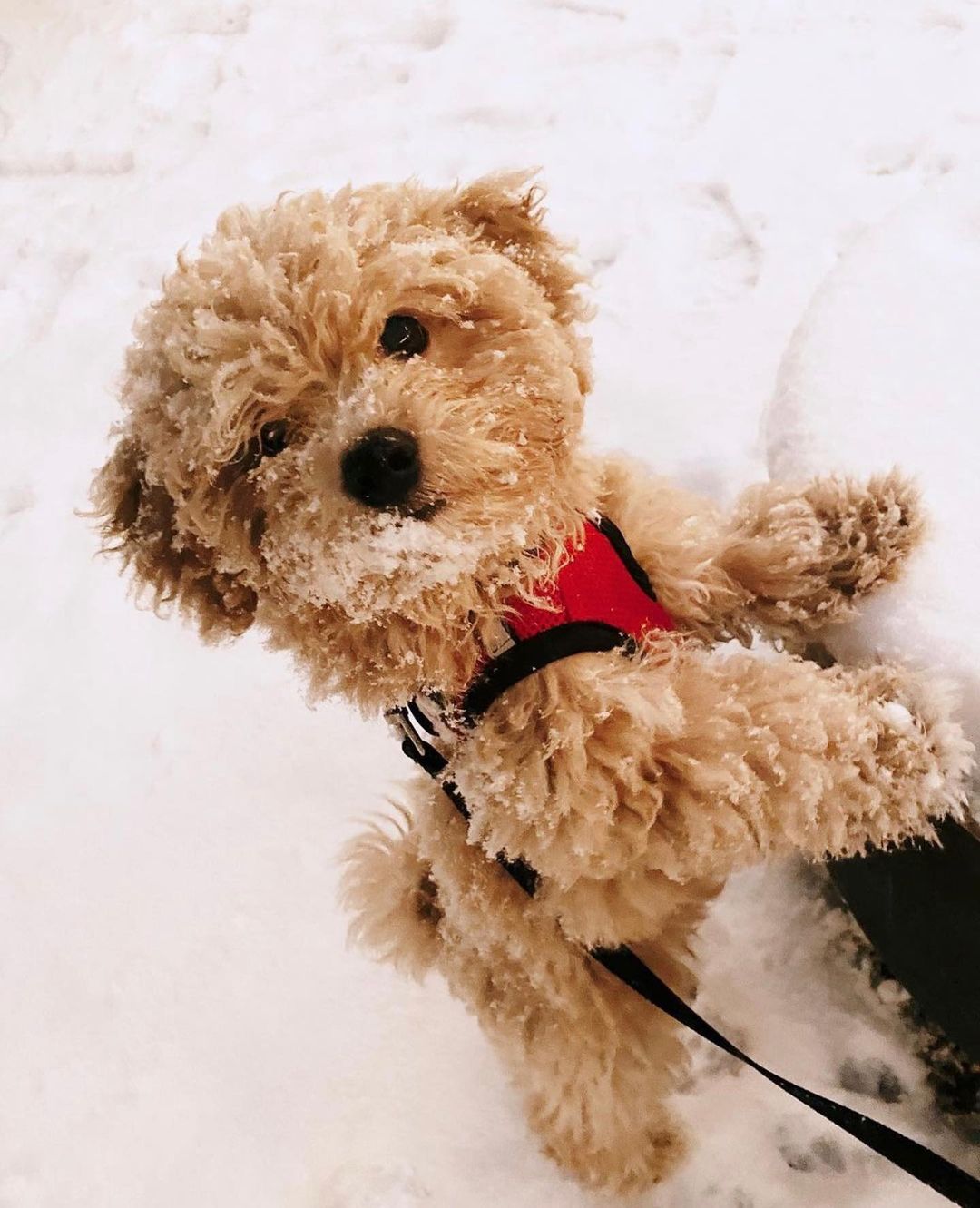 The Bichon Poodle Mix is ​​a designer dog by definition. It is a first-generation mix between a poodle and bichon frize. It was created as a result of human intervention with the intentional crossing.

A debate has been going on in the dog owner community for many years: Are designer dogs ethical? Are “purebred the nuts” or vice versa?

Neither side is absolutely right or wrong. Everyone makes some valid points – so it is up to the owners to make the decision that feels right to them.

On one side, you have purebred dog advocates. This group tends to prefer the consistency and predictability of these ancient breeds.

On the flip side, advocates of designer dogs and mixed breeds claim that crossing bloodlines helps eliminate some of the health problems associated with purebred dogs.

Some use the concept of “hybrid power” as evidence to support this claim.

It is true that smaller gene pools can lead to an increased risk of certain hereditary health problems, as studies show.

However, in addition to ethical concerns, there are also specific health issues with crossbred dogs.

There is no right answer to this debate. There are valid arguments for both. We don’t take sides, we want to make all the information available to all readers so that they can make their own informed decisions.

Now that we have discussed the controversy, let’s learn more about the Bichon Poodle dog, starting with the origins of the breed!

Origin of the Bichon poodle mix 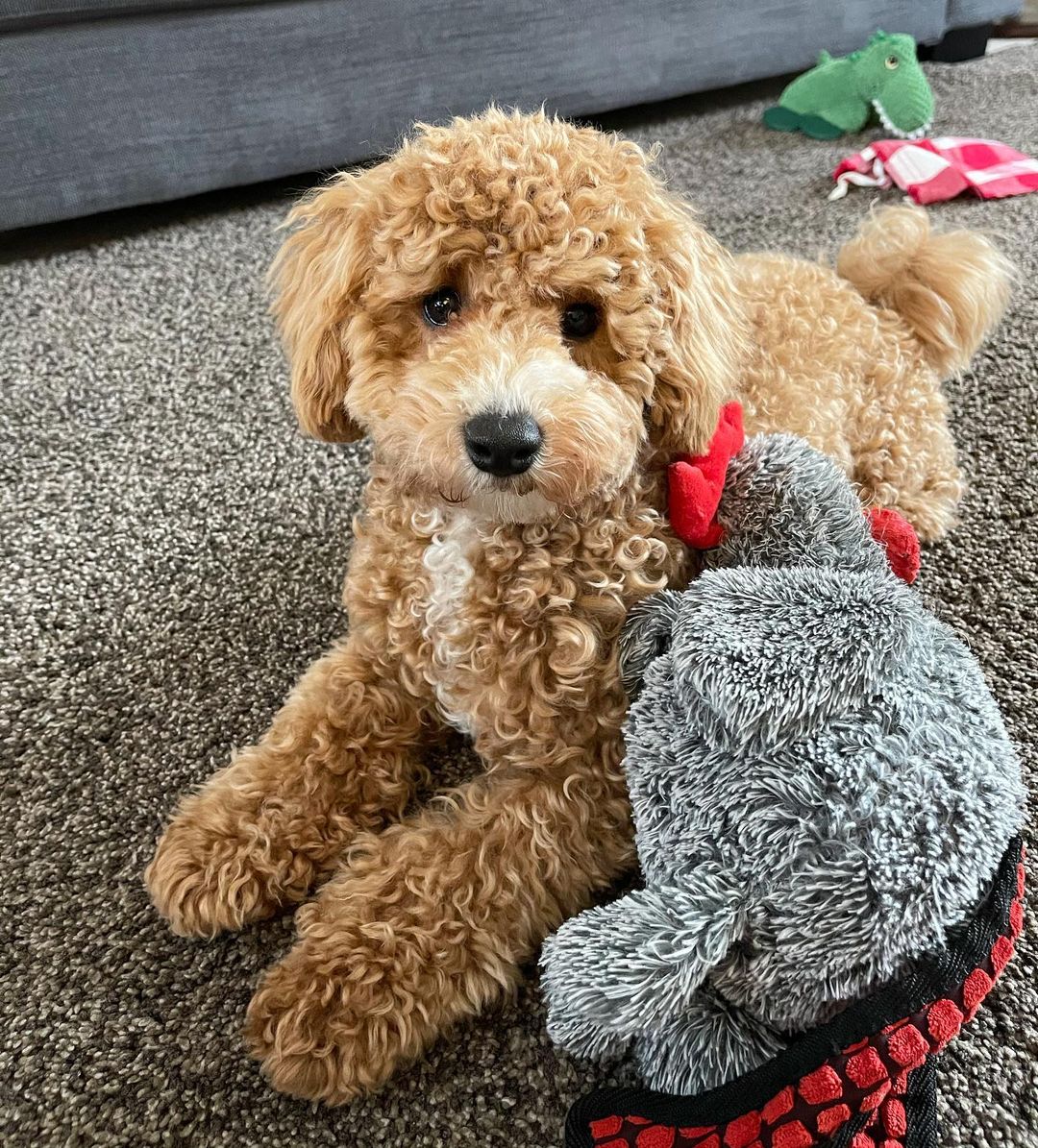 The Poochon originated in Australia in the 1990s. It was bred to be an active, loving pet that gets along well with children and other pets.

The breed is a mix of the Bichon Frize and either a miniature or a toy poodle.

This breed has grown rapidly in popularity in recent years as more and more people discover the pleasant temperament and adorable appearance of the Bich Poo.

For more information on the origins of this breed, let’s check out the history of the two parent breeds.

Origin of the Bichon 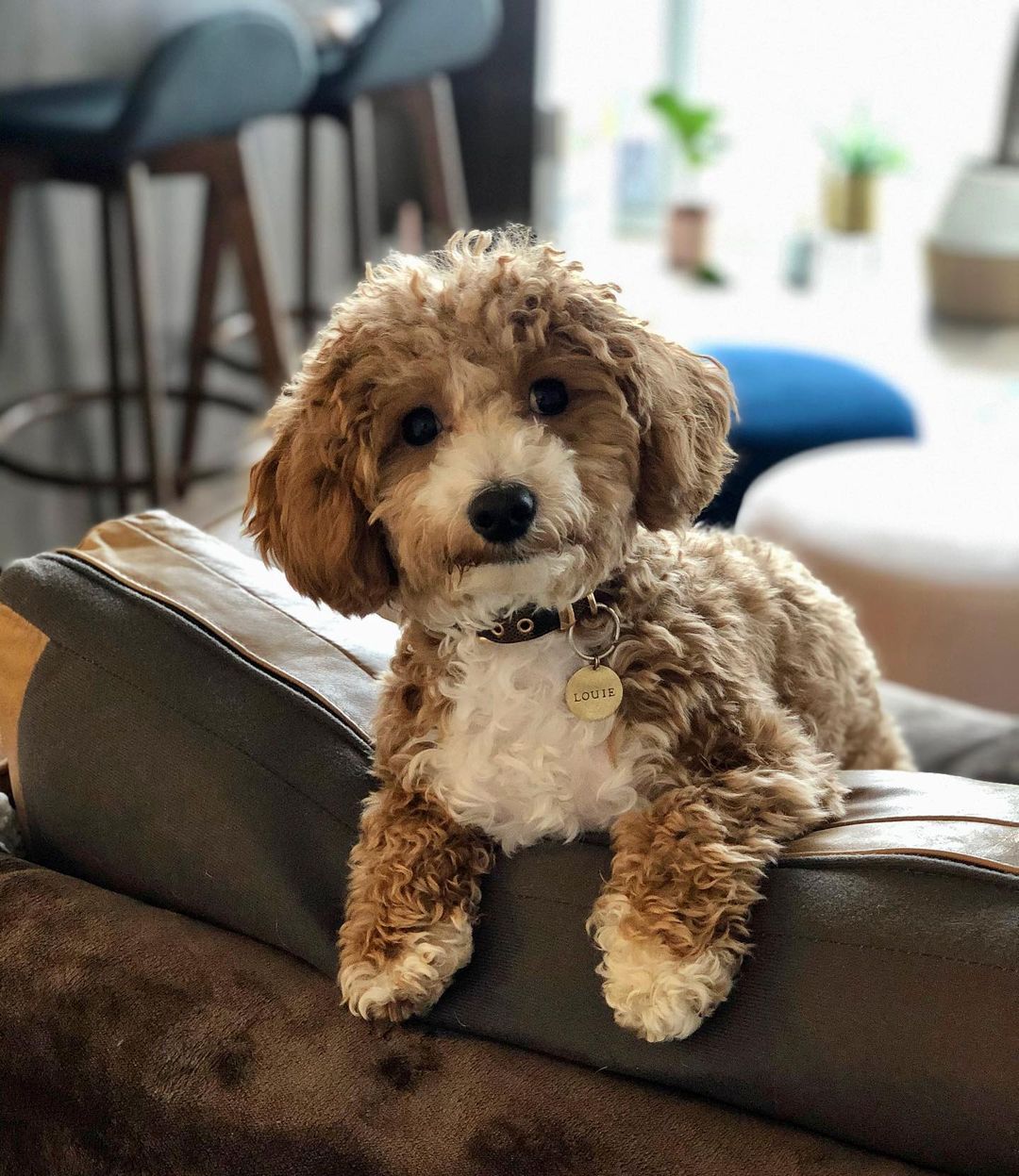 The Bichon Frize is believed to descend from Bichon Tenerife, a member of the Barbican breed family (which also includes the Bolognese, Havanese, and Maltese breeds).

The Bichon started in the Canary Islands, specifically on the island of Tenerife.

The breed has roots that date back at least to the 13th century when they became increasingly popular with European royalty.

Eventually, the breed made its way to America, where it was officially recognized by the AKC in the early 1970s. It is still a popular family and shows dogs to this day. 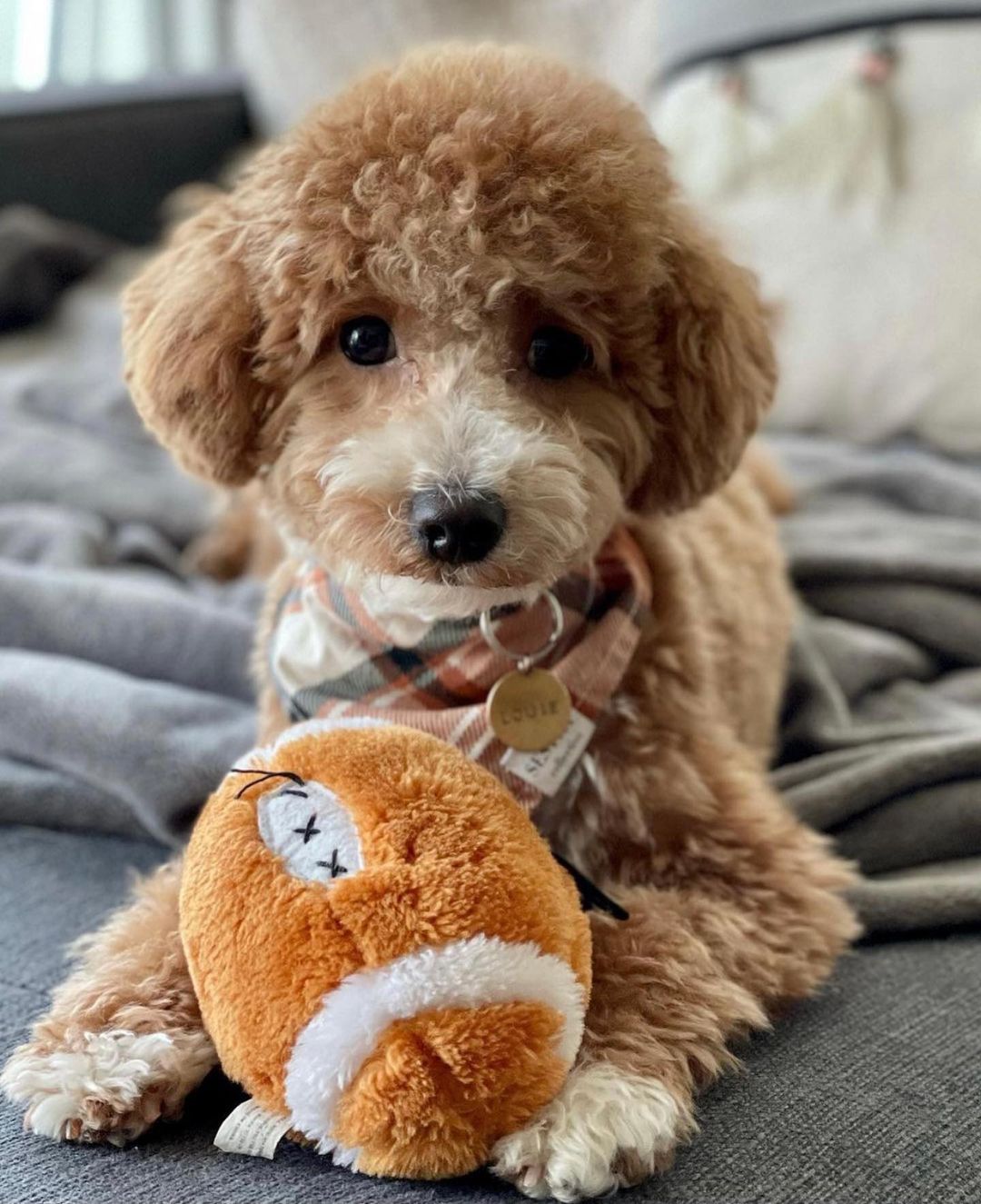 The poodle has a history of at least 400 years.

It is believed that it originated in Germany, where it was bred to fetch waterfowl for hunters.

Despite its German origins, the poodle became the national dog of France and retains the title to this day.

The standard poodle, the original breed, was bred to miniature, which was then bred back to the toy variety.

Today, all three versions of the poodle, as well as the different hybrids, are popular.

The Bich Poo is bred from either the toy or miniature poodle variety. 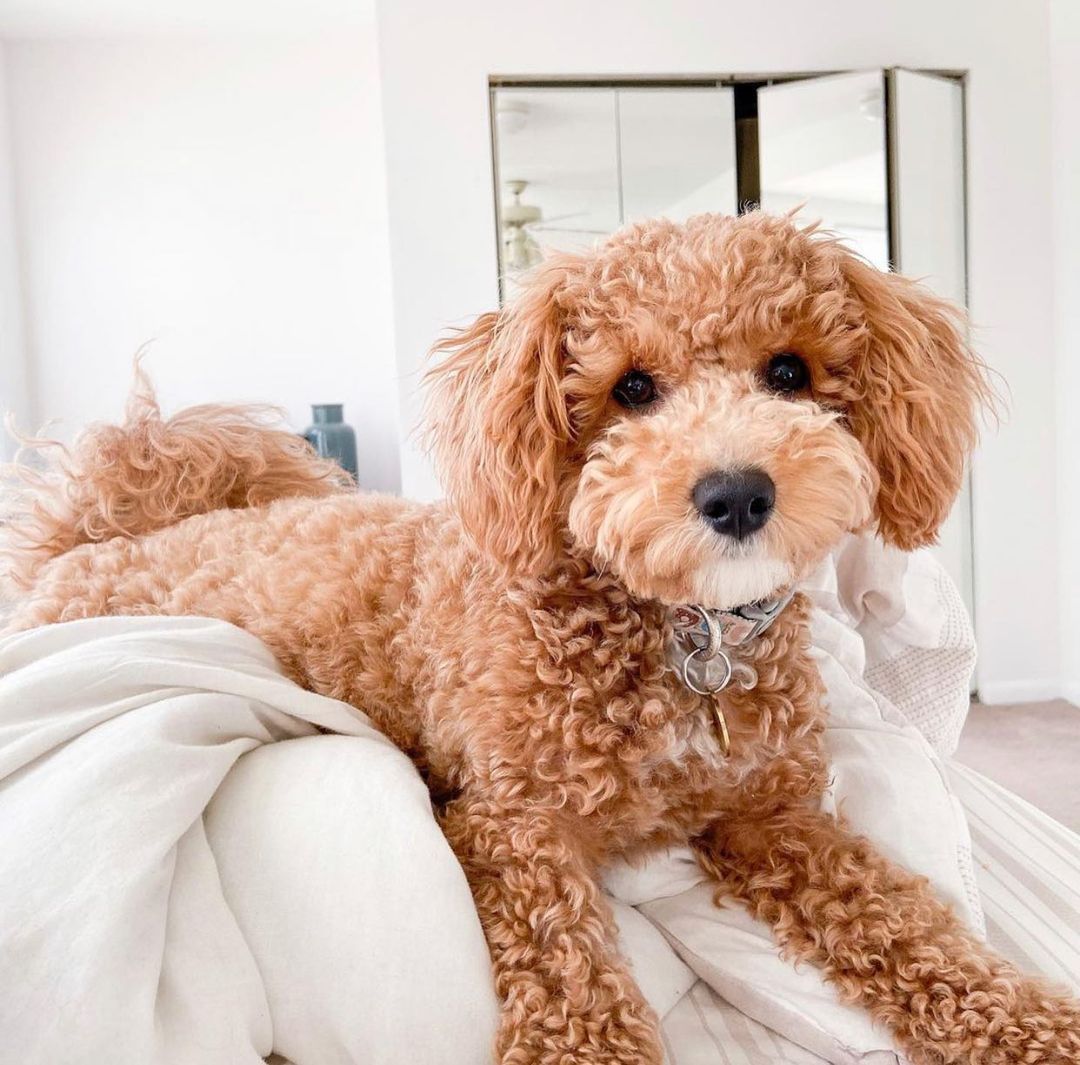 So how is this dog anyway? What is the temperament of the Bich Poo?

The Bich Poo typically takes on many of the characteristics of its parent breeds.

Most Bichon Poodle mixes have a lively, loving, and active disposition. You’re pretty intelligent too.

Typically, a Bichon Miniature Poodle has an accommodating, patient nature. This makes them a good choice for households with children or other pets.

They are prone to sudden bursts of energy so they often see momentary zooming in.

They bark a lot too. That can make them good watchdogs. But it also means that if they are not properly trained at a young age, the barking will become too strong.

With all that being said, it’s good to know that any crossbred dog will have a level of unpredictability.

Bichon poodle puppies might acquire more traits from one parent breed or another.

Hence, knowing exactly what personality your dog will have is difficult as it could be more of a Poodle, or more of a Bichon Frize, or anywhere in between.

Physical characteristics of the bichon and poodle 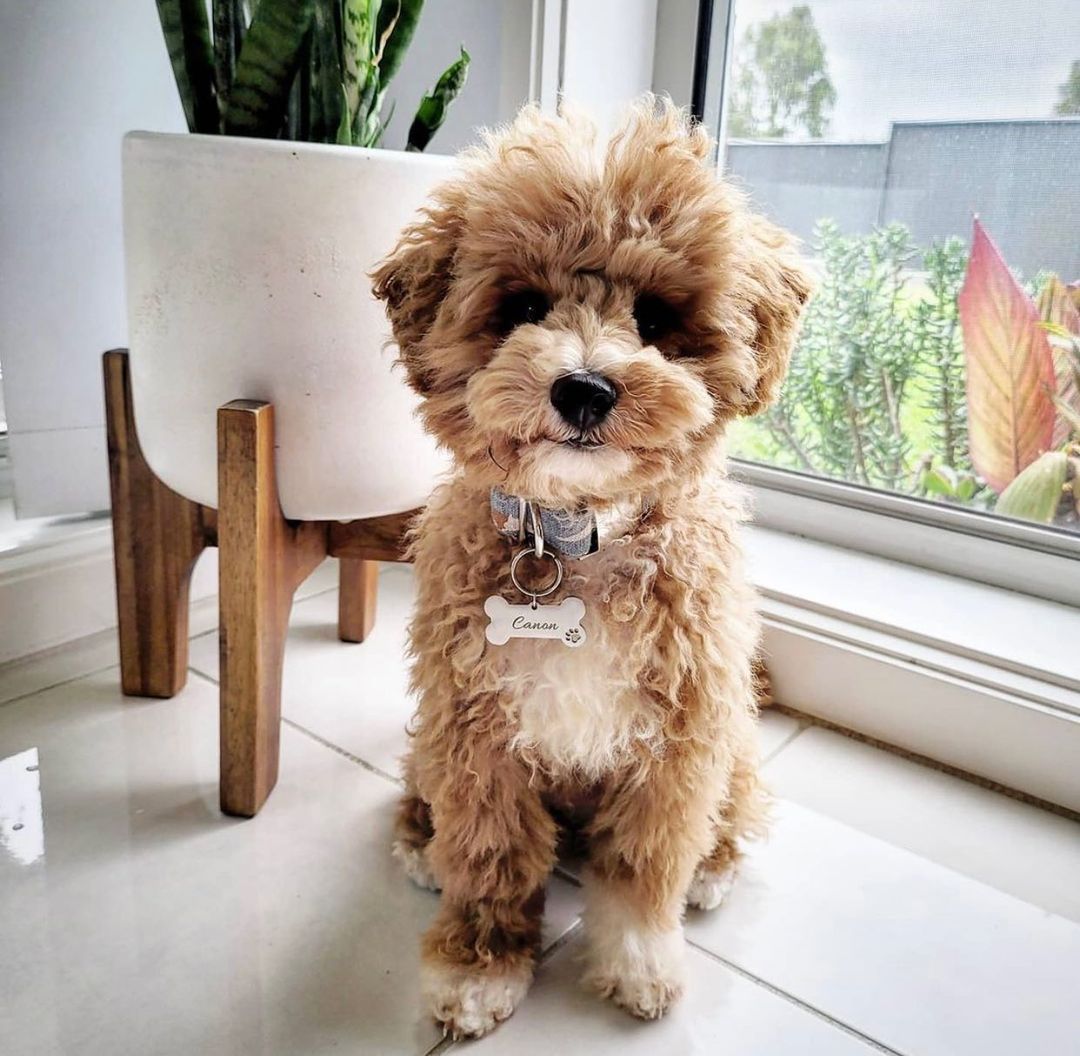 The physical characteristics and appearance of this breed can vary, as can behavioral tendencies. It depends on which parent breed comes through stronger.

With that said, the majority of these dogs are small, averaging 6 to 12 pounds. They are usually 9 to 14 inches tall when fully grown.

The size of a Bichpoo dog also depends on the size of the parents and whether the Poodle parent is of the miniature or toy variety. 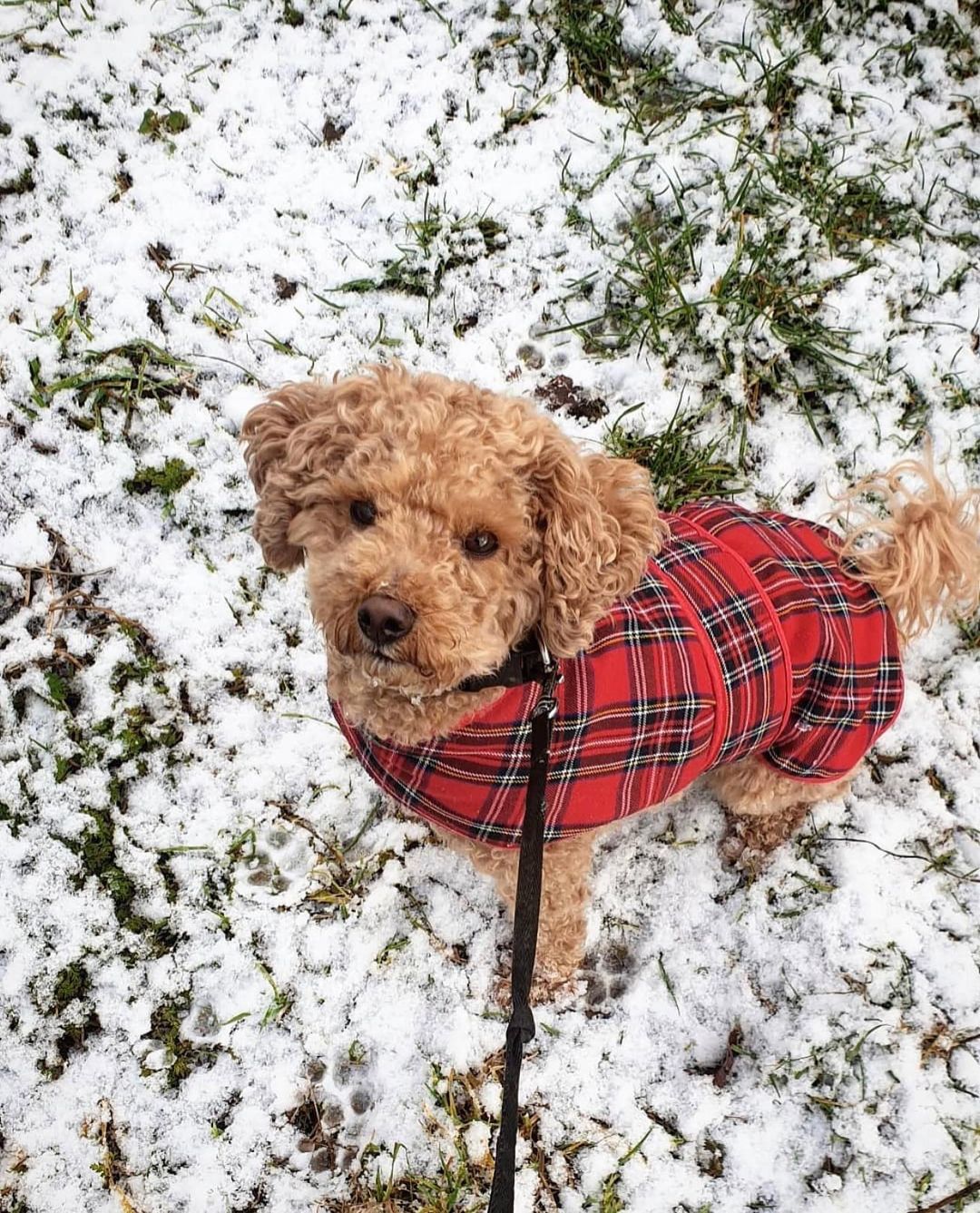 The Poochon has a medium-length, curly coat. Her cute button nose is the only feature that stands out from the thick curls.

Their coats are usually quite soft as long as they are properly groomed and cared for.

They also inherit the Poodle’s tendency for very low shedding.

The Bichon Poodle layer is usually white or apricot, with various other nuances of light possible but not common. 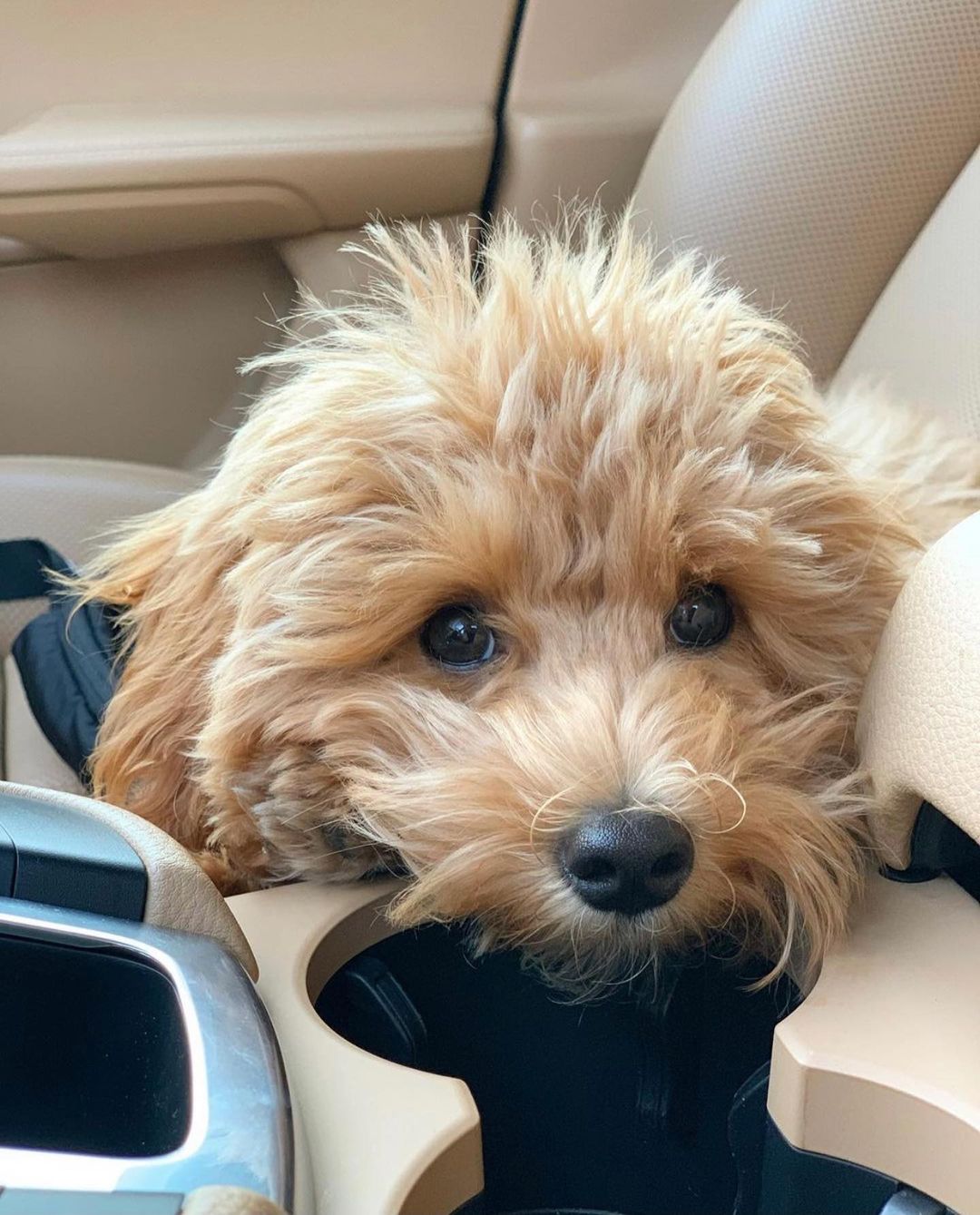 The Bichon Poo needs frequent brushing to keep the fur soft and to avoid matting. Ideally, you should brush the fur daily.

Frequent bichon poo haircuts are a necessity. Coats should be trimmed every two months to maintain a manageable length and prevent matting.

There is very little shedding in this breed, but routine grooming is still important.

Dental care is also important for this breed as they can be prone to gum inflammation and, consequently, dental problems.

Bichon Poodle mixes are prone to many health concerns that are prevalent in their parent breeds.

Eye problems are common, including progressive retinal atrophy and cataracts.

Dental concerns are another common problem. Bichons in particular are prone to gingivitis and tooth loss. It is important to brush your dog’s teeth regularly.

Many of these health concerns can be tested. Reputable breeders conduct health tests on their breeding stock to minimize the risk of complications.

Interestingly, there is evidence that first-generation mixes (i.e., direct descendants of Poodle and Bichon Frize parents) are less likely to inherit health problems from their parent breeds.

Second generations and beyond (offspring of two Bichon-Poodle mixes) are more likely to show health concerns that are common in Poodle and Bichon-Frize dogs.

As with any breed, frequent veterinary exams are important and should be scheduled at least once a year. 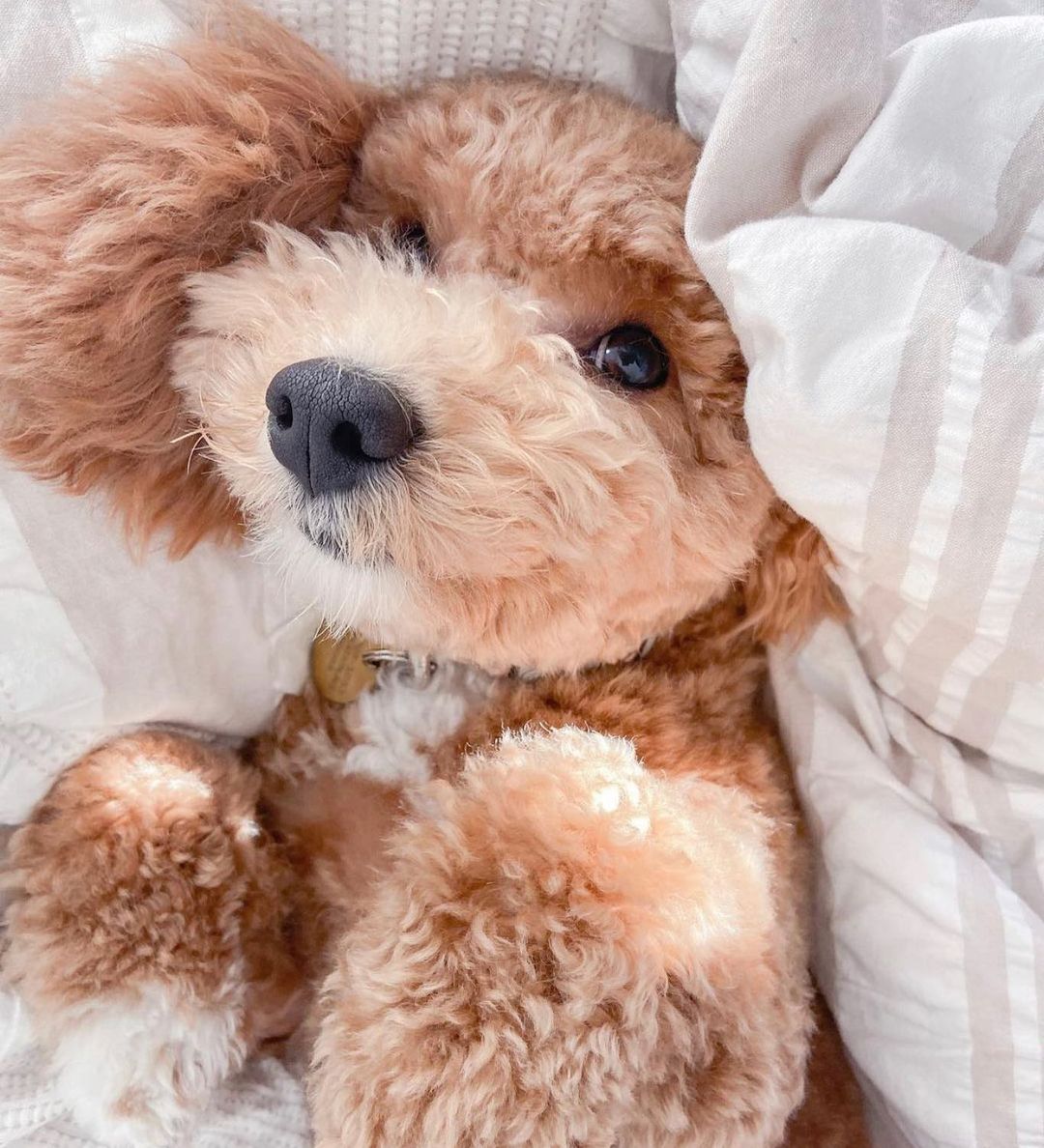 Both the puppies and adult dogs from Bichon Poo are quite active. They have a moderate to high energy level and enjoy frequent walks and playtimes.

Due to their small size, they are more likely to be on shorter walks than once a day.

They also tend to have quick bursts of energy in which they enjoy running around and playing.

As far as training is concerned, this mix is ​​usually very popular. Combine that with their intelligence and you have a breed that usually responds well to training.

In these words, when it comes to exercising, the sooner you start, the better results you will get. This is especially true for problem behaviors such as excessive barking.

It is important that you exercise and socialize your puppy from a young age. If you are new to training, it is worth hiring a trainer or obedience school to help.

The Poochon can make a great family pet and companion for the right type of person.

There are a few things to keep in mind when looking at this breed.

For one, the energy level is pretty high. This means that you need to plan enough time for exercise and play.

Third, this breed is prone to frequent barking. It can be minimized with proper training, but the bottom line is this can be a very happy breed that requires a certain amount of patience.

Finally, potential owners should be aware of common health concerns associated with this breed. The Bichon Poo is a relatively healthy breed, but it is still important to be aware of your dog’s potential health issues.

In addition, this is a great breed. They are loving and accommodating and usually get along very well with other pets.

They are good for older children, but care should be taken with very young children.

How to Find Bichon Poo Puppies 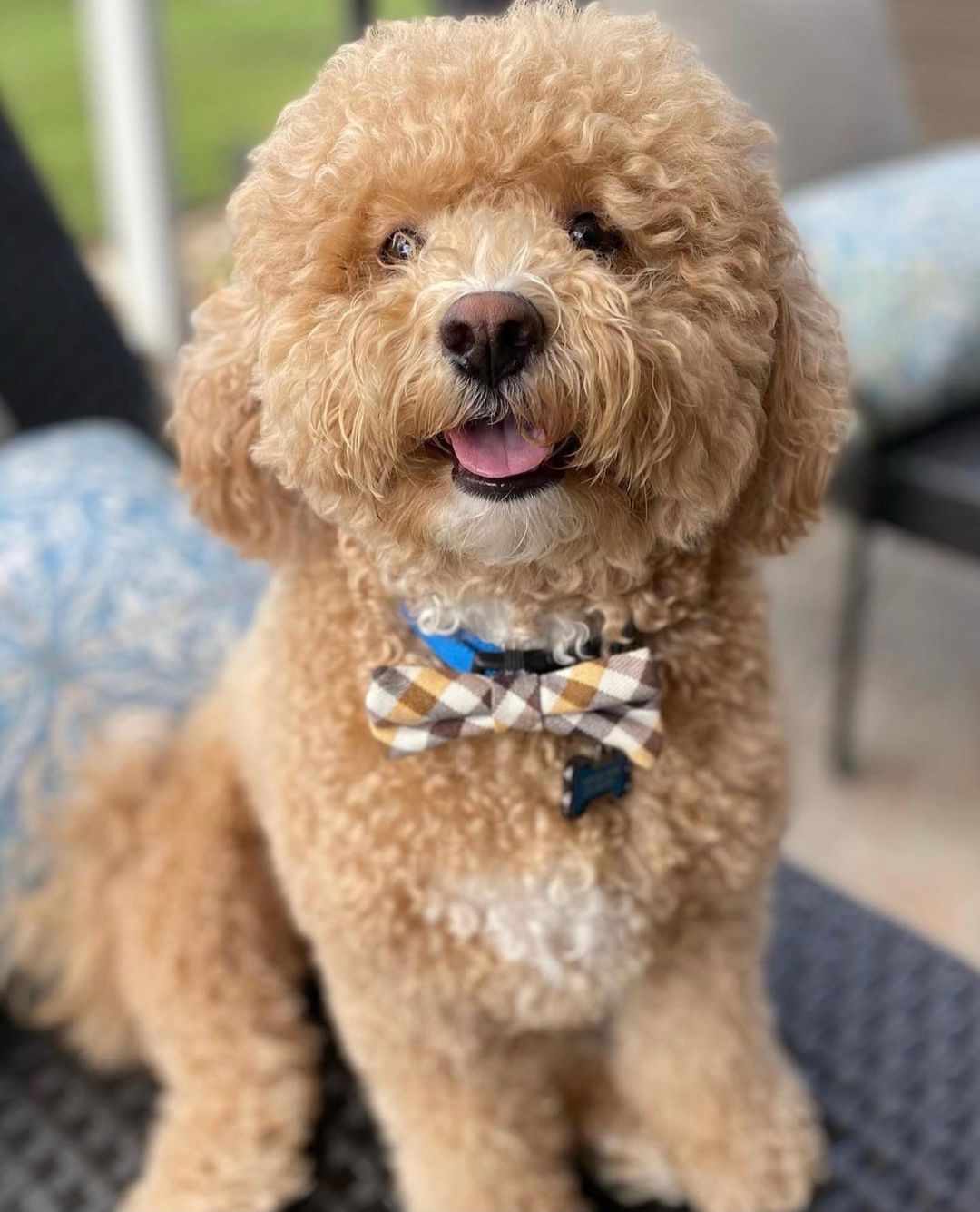 Finding Bichoodle puppies can be a challenge depending on where you live.

It is important to see reputable Bichon poodle breeders whenever possible. A good breeder will conduct health tests on their breeding stock to reduce the risk of various hereditary health problems.

To find breeders, search the web for resources near you. This could be a breeder website, a local dog club, or even the local animal shelter.

Before choosing a breeder, it is important to research the background and reputation of the company or person.

Also, don’t be afraid to ask for a record of the dog’s health. Reputable breeders won’t hesitate to show you health data and test results.

Do you have experience with this mixture? Let us know in the comments!