Here you can find out everything about pregnancy in dogs: how it progresses, what food pregnant dogs need and how you, as the owner, can support your dog during this time.

Depending on the breed, puberty or sexual maturity begins at the age of five months or as late as one year. With the bitch it is characterized by the first heat, with the male the transitions are often fluent: he lifts his leg when peeing, is increasingly interested in the bitches and increasingly sees rivals in other males.

Before the dog becomes pregnant

Before you decide that your bitch should have offspring, you should clarify important things. The bitch should be healthy, fit and of normal weight. If the bitch has had puppies before, you should make sure that enough time has passed since then for the bitch to recover. In addition, bitches should not have puppies too early. We recommend waiting for the first 15 months of life in any case.

It is also particularly important to think about what should happen to the puppies: Are there sure buyers or is the future of the puppies still unclear? If the latter is the case, you’d better dismiss the idea of your bitch having pups. There are already so many dogs in shelters that puppies should not be born without reliable buyers.

Inform yourself well about the course of pregnancy and birth as well as about the needs of bitches and puppies!

If you do not want any offspring, you can also think about castration. Do not let your dog off the leash when she is in heat to prevent an unwanted pregnancy.

The course of pregnancy in dogs

A bitch is pregnant for about 57 to 65 days. The length of pregnancy depends on both the breed and the size of the litter: if the bitch has many puppies, the pregnancy can last less than if the litter is small. From the 56th day of pregnancy, a viable puppy can be born.

After mating, the ovum is fertilized. In the first few days and weeks, the fertilized egg cells migrate from the fallopian tube into the uterus, which they reach after two weeks at the latest. Cell division occurs. And so it continues:

Caution: Up to the 35th day, the puppies in the womb are very sensitive to external influences (e.g. medication, dewormers, vaccinations, X-rays, vitamin deficiency/oversupply, intense heat, environmental pollutants). During this period, urgent care should be taken to keep the bitch away from such dangers. Otherwise, the puppies may develop malformations or miscarry.

A lot also happens with the pregnant bitch during pregnancy. Her body changes, her teats get bigger and behavioral changes can also occur. There are also examinations at the veterinarian, e.g. for the ultrasound.

Nutrition of dogs during pregnancy

A pregnant bitch needs a special diet. After all, she not only has to take care of herself, but also her babies that are growing in her womb. Therefore, both a pregnant and a lactating bitch require more energy.

In order to feed a pregnant bitch appropriately, the quality of the dog food is important: Only feed high-quality food that contains all the important nutrients and provides the bitch with good care.

In addition, the amount of food must be increased during pregnancy. In the first four weeks this is only minimally necessary, an increase of the daily ration by 10 percent is recommended. From the fifth to the eighth week, the bitch’s nutritional requirements then increase by a factor of 1.3 to 1.5. In the last week, the amount of food should be slightly reduced again.

It is best to feed several smaller meals a day. Of course, the bitch must always have fresh water available. 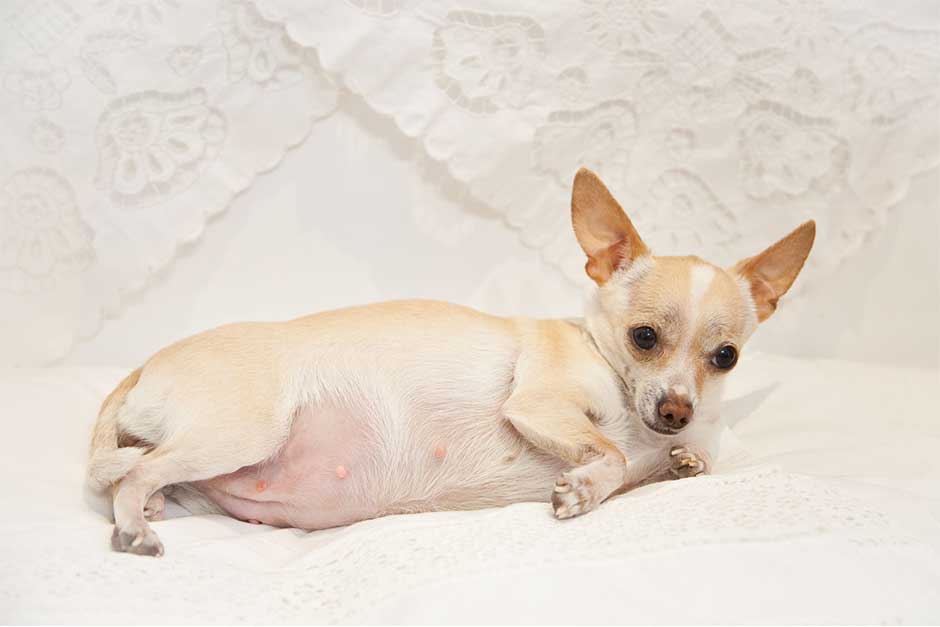 Like pregnant women, pregnant bitches may experience nausea and vomiting. In addition, the bitch can become particularly clingy or show a reluctance to eat, especially in the first few weeks and at the end of the pregnancy. In the last few weeks, the bitch can also be restless and insecure. Be understanding and meet your bitch’s needs. Give her rest when she needs it and be there when she is clingy.

Later in the pregnancy, your bitch will look for a suitable place to give birth. You can support her in this and build her a litter bed a few weeks before the birth.

Exercise is important for pregnant bitches. However, you should avoid strenuous exercises such as jogging, swimming, or cycling. Rough games with other dogs are also not suitable.

The birth will then start between the 57th and 65th days. Read here how you notice that the birth is imminent and what your tasks are during the birth of the puppies.