The Scottish Terrier is a tireless bearded inventor, a furious debater, and a mischievous headstrong, with an almost magnetic charm. In the house where the Scottish Terrier lives, a positive attitude almost always reigns, because it is impossible to remain too serious with such a dog. By the way, you can have no doubt that you will literally have to be with the Scottie: the representatives of this breed consider it their direct responsibility to take an active part in all the owner’s endeavors. 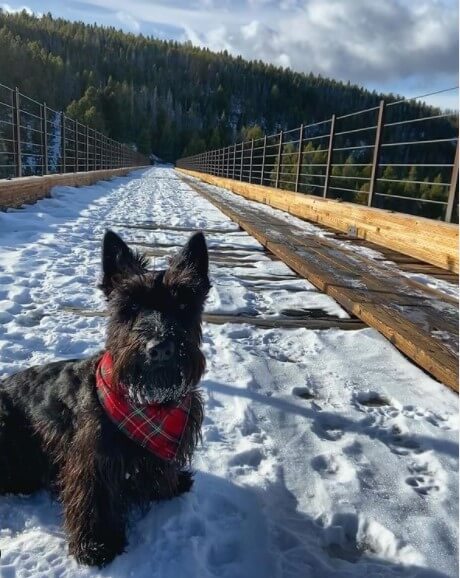 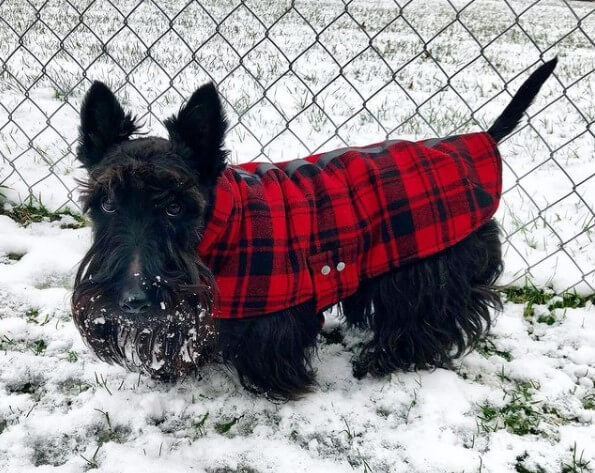 History of the Scottish Terrier Breed 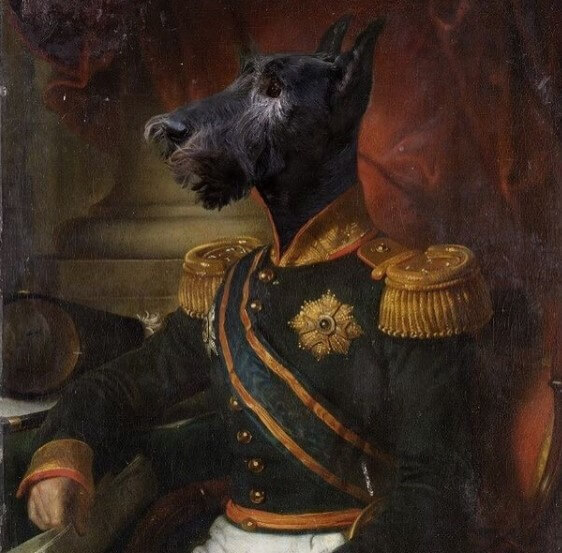 It is believed that the Scottish Terrier is a very ancient breed, and dates back to the ancient Roman dogs called “Terrain” – from the word “terra”, which means land, described by Pliny the Elder. They had a similar appearance and temperament. On the other hand, there is very clear evidence of the existence of the Old Scottish Terrier breed, which has now become extinct.

In fact, they were the ancestors of the modern Scottish Terriers, who had a very similar appearance and character to them. The Old Scottish Terrier is one of the oldest breeds in Scotland. These dogs were first described by Don Leslie in the book “History of Scotland” in 1436 as a strong animal of black or sandy color, short in stature, with long, hard hair and small ears.

In the seventeenth century, King James I of England sent several dogs to France as a gift to the French ruler. This played a huge role in the popularization of the breed in medieval Europe. By the beginning of the 19th century, 2 breeds were formed in England that have similar features – the Scottish Terrier (with a hard coat) and the English Terrier (with a smooth coat).

Since by the end of the 19th century, many different breeds of Terriers appeared on the territory of Great Britain, they decided to divide them into two main groups. These are Dandy Dinmont Terriers and Skye Terriers (the latter included all Terriers from the Isle of Skye). The Scottish Terrier, respectively, was assigned to the Skye Terrier group and was shown at shows in this class until the 1870s, when for each of the breeds of this group, its own standard was developed, and they were divided into breeds: Scottish Terrier, Skye Terrier, Kern Terrier, and West Highland White Terrier.

These dogs were loved by many celebrities and politicians – Franklin Roosevelt, George Bush, Shirley Temple. Even Hitler ordered two Scottish Terriers for Eva Braun. They were also appreciated for their courage and ability to go to the end. In the 19th century, an officer, Earl George Dumbarton, had a flock of Scottish Terriers – they were so fearless in a battle that they earned the nickname “die-hard”. 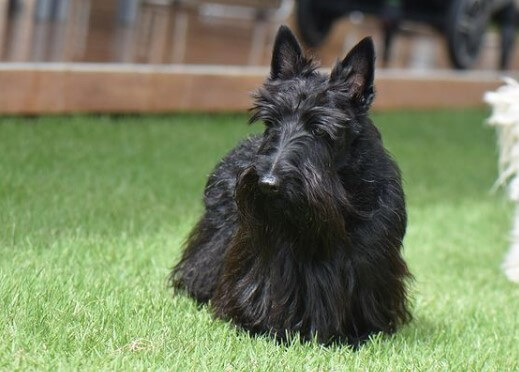 The Scottish Terrier dog has a small size, a long, elongated muzzle on which long hair grows, forming a kind of beard. The paws are short but strong, the body is strong, the ears are triangular and erect. The tail is usually pulled up. The color can be black, gray, brindle, cream, and even white. 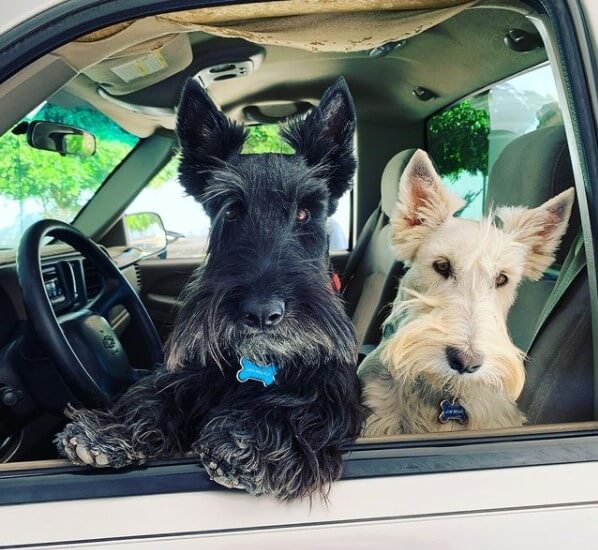 Energetic, defiant, often intolerant of strangers and other dogs, these are all hallmarks of the Scottish Terrier breed. These dogs need early socialization and acquaintance with other animals, otherwise, they will constantly fall into various unpleasant stories.

They can bark and rush at strangers and animals, and will not retreat in battle with another dog under any circumstances. But if the enemy retreats, the Scottish Terrier is also likely to calm down. This breed is distinguished by great stubbornness, sometimes reaching the point of absurdity – but in this regard, heredity and upbringing play an important role. If you are an inexperienced owner, or you are not strong enough, it is better to opt for another dog.

The Scottish Terrier breed has developed its hunting instincts over hundreds of years, and even now they are extremely strong, although in the modern civilized world these dogs are rarely used for hunting. They can run after an interesting smell, start digging holes, and try to stick their long nose in there. They will try to catch a squirrel in the park. Moreover, they are extremely difficult to stop. Therefore, you must pay great attention to nurturing, obedience, nurturing the right character, and canceling commands.

Many Scottish Terriers have a very friendly and open character within their family, although even so, they will not be denied independence and stubbornness. But they are extremely devoted to the family and master. Children are treated normally, but sometimes they can show dissatisfaction if they do not share the desire to play. Smart and quick-witted. They need walks, physical activity, exercise, as an excess level of unrealized energy can create a huge mess at home in your absence.

A Scottish Terrier can live in a variety of conditions, however, if you live in a private sector it will be an excellent watchdog. Despite their small size, they bark loudly and intensely, raising a real alarm around. On the other hand, you will need to make a solid fence without holes and also come to terms with the consequences of the holes that the Scottish Terrier will definitely dig in your garden. 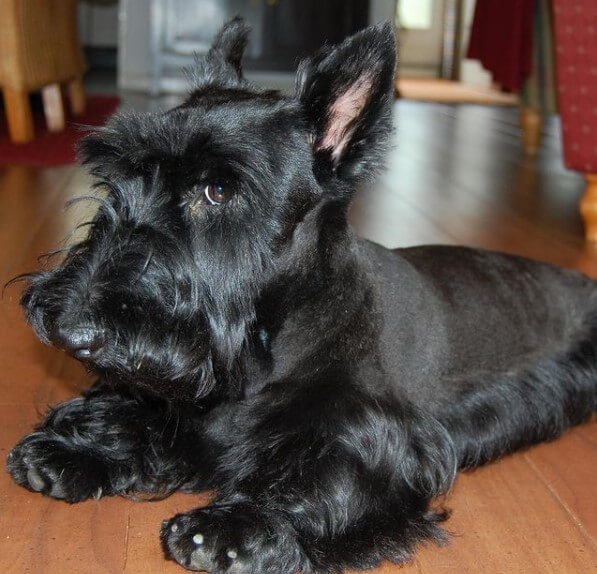 The Scottish Terrier breed is distinguished by great stubbornness and independence, and therefore the owner will need to have a firmness of character and great patience in training. Be sure to pay attention to obedience, be strict and fair. The learning process should start as early as possible – then you have a better chance of success.

This breed is distinguished by high intelligence, despite its stubbornness, and therefore they can be taught both basic and complex commands. It may not be easy, though. To make the learning process more effective, in the early stages, alternate training with games, use rewards and manipulation.

You should not think that you will achieve success by simple coercion and punishment – this is not so. The dog should see you with a superior consciousness – kind, but strict when needed. Be sure to use distractions, other people’s smells and sounds, and increase the distance between you and your dog.

Hunting with a Scottish Terrier 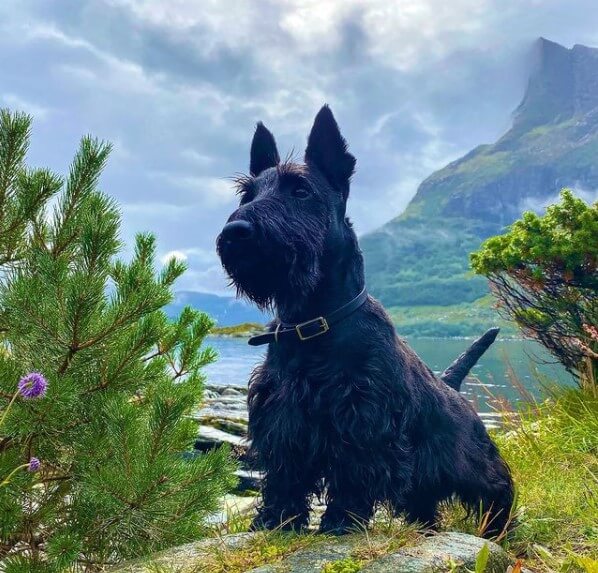 Today’s Scottish Terriers rarely hunt, but not because of the loss of the pursuit instinct, but because of the owners’ unwillingness to train with the dog. Modern breeders rely on the image of pets, so not every owner is ready to let his glamorous handsome man dig and get dirty in the ground. However, if the hunting instinct is yours and you don’t regret spoiling your pet’s appearance a bit, visit the bait spots if they are nearby. There, the Scottish Terrier will quickly be reminded of its main purpose, and in a month or two a highly qualified fox catcher and conqueror of the deepest holes will walk next to you. 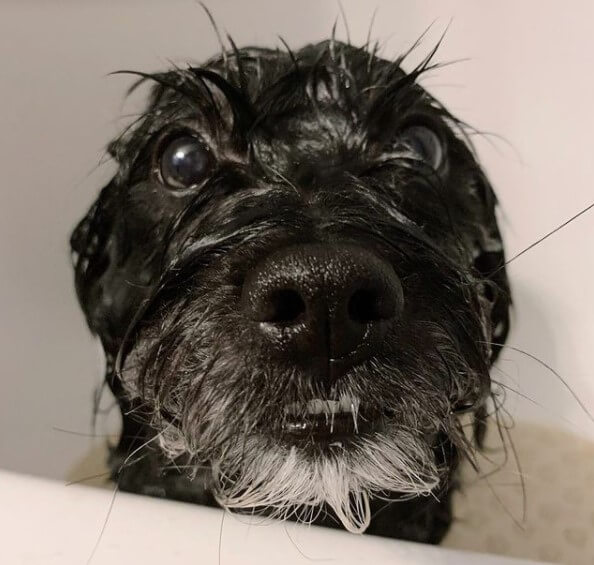 A Scottish Terrier dog needs combing 1-2 times a week, as well as a haircut. Claws are trimmed usually once every 10 days, the animal is bathed 1-2 times a week. Be sure to clean your ears and eyes of dirt and deposits, especially after walking, as the Scottish Terrier loves to climb the bushes, look for tracks in the grass, and dig in the ground. 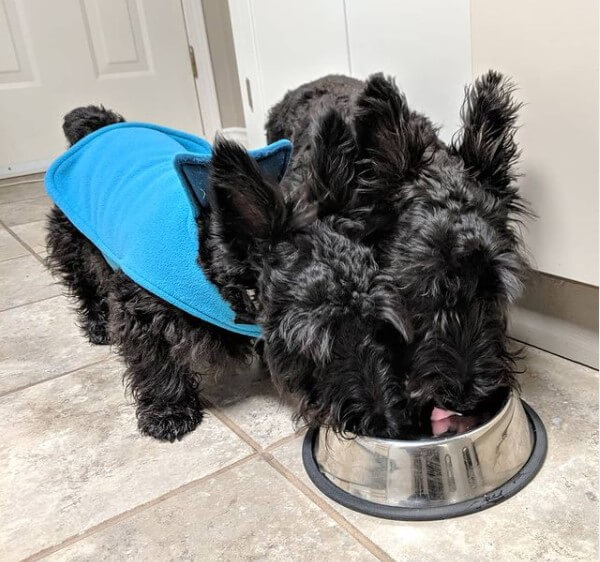 The main source of protein for an adult Scottish Terrier is lean, raw beef. Lamb, like pork, is a time bomb for the liver and guaranteed diarrhea, so we immediately sweep them aside. Boiled offal can be a good alternative to beef, but no more than a couple of times a week. By the way, Scottish Terriers usually do not suffer from allergies, so turkey and chicken meat with previously peeled skin is not prohibited for them.

Three to four times a month, the Scottish Terrier is pampered with boiled, boneless sea fish. In addition, the dog’s menu should constantly include low-fat fermented milk products. Buckwheat and oatmeal are useful from Scotti groats, carrots and cucumbers are useful from vegetables. 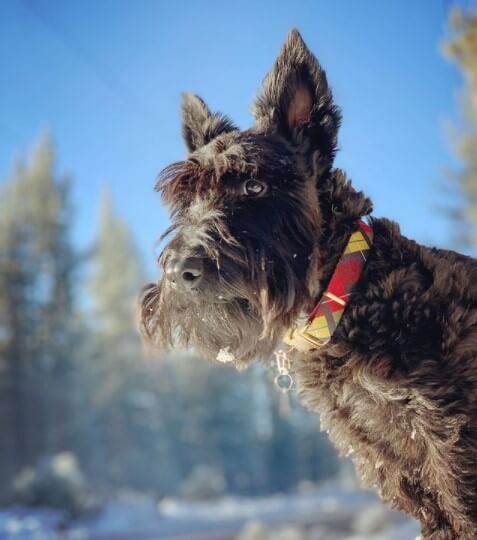 The Scottish Terriers inherited from their ancestor’s such unpleasant diseases as muscle cramps (Scotty Crump), hemophilia, Cushing’s syndrome, achondroplasia, dysplasia, pulmonary artery stenosis, and retinal atrophy. Some of these ailments are detected in puppies within a few days after birth using tests, while others cannot be diagnosed at an early age and make themselves felt when the dog turns three to four years old. 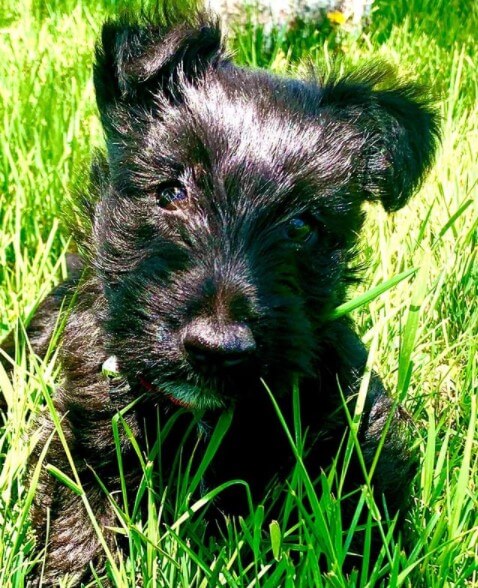