Shar-Pei is one of those breeds that cannot be overlooked at any dog ​​show or just on a walk. The unusual shape of the head and, of course, strong folds distinguish them from their relatives, and the blue-black tongue completes the picture – among hundreds of modern breeds, only the Chow Chow can boast of this. But no less famous among breeders and their independent disposition. 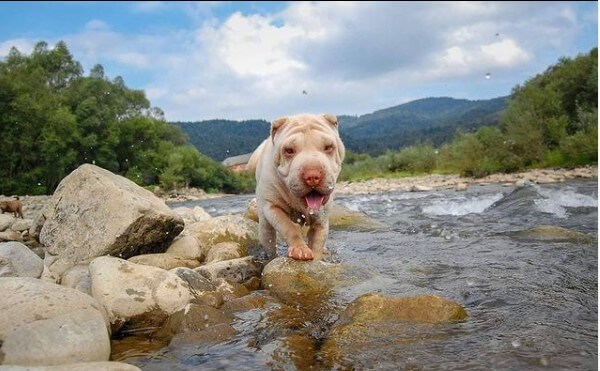 Despite the fact that some modern researchers doubt that the Shar-Pei breed of dogs originated more than 2,000 years ago, the statues are 200 years old BC. e. confirm this. Shar-Pei originated in the southern provinces of China, and from there spread throughout the country. In fact, the statues only confirm that in the 200th year BC. e. The Shar-Pei was already a mature breed, which means that it can be assumed that this dog arose somewhat earlier.

The inhabitants of China used this breed for completely different purposes – for guarding and grazing livestock, for guarding homes, as a nanny, and in battles. Until the revolution and civil war, which led to the creation of the People’s Republic of China, these dogs faithfully served people of different social strata.

However, during the years of the so-called “Great Leap Forward”, when the country was gripped by an incredible famine, which led to the death of more than 40 million people, the Shar-Pei was practically destroyed. To be more precise, people just ate dogs – people survived as best they could. As barbaric as it may seem to us.

A small number of dogs were saved by transportation to Hong Kong, to Down-Homes kennel – this was done by dog ​​enthusiast Matgo Lowe. In 1973, several dogs were brought to the United States. A year later, the dog owners organized the “China Shar-Pei Club of America”, and in 1978 the first national specialized exhibition was held. In 1991, the American Kennel Club officially recognized the breed and gave it the status of a member of a sports group. 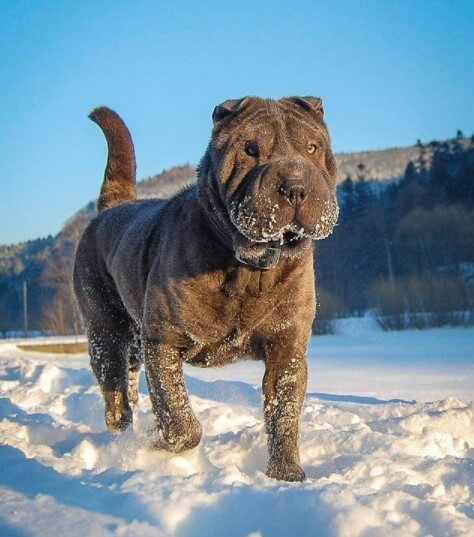 The Shar-Pei breed is a medium-sized dog with a large number of folds of skin not only on the face, but also throughout the body (usually there are much more of them on the face, and the body can sometimes be completely devoid of folds if the dog does not overheat and has a sufficient amount of physical activity ). The build is strong, the limbs are of medium length, the tail is also of medium length. The ears are small, bent forward, the hair is short. 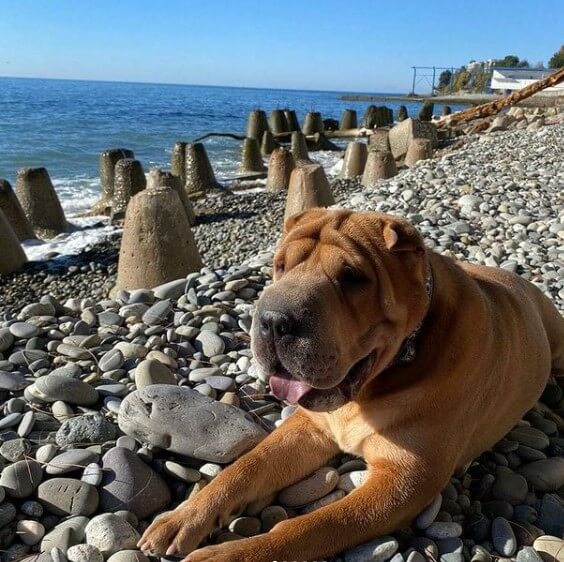 Shar-Pei can be any solid color except white: “red deer” (red, classic), black, chocolate, apricot or cream dilute, blue, isabella, lavender, and others. Spots are not allowed, but darker (along with the spine and on the ears) and lighter (tail and back of the thighs) areas of the coat are possible.

Shar-Pei will definitely disappoint people who dream of a cheerful and playful pet. These are independent, withdrawn, and not particularly mobile “philosophers”. If the owner gives slack in their upbringing, they will not hesitate to take advantage of the slip in order to take a dominant position in the “pack” and dictate their terms to the household. However, an experienced owner who will be able to establish his authority without the use of physical force and screaming, with the help of a professional’s advice, will raise a well-mannered and obedient dog.

The protective functions that have been assigned to the breed for many generations leave their mark on the character. Shar-Pei will be wary of strangers and in general everyone who is not in a close social circle and may openly demonstrate unfriendly intentions.

These dogs have never been good-natured nannies who patiently endure the unintentional rudeness of young children. Leaving them alone with the unintelligent crumbs is strongly discouraged. It is also worth remembering that due to physiological characteristics, Shar Pei’s field of vision is severely limited, he perceives sudden movements as a potential threat and reacts accordingly.

Shar-Pei usually gets along poorly with other animals. Dogs are perceived as opponents, and by virtue of instincts, they treat other pets as prey. An exception may be cats if they grow up together.

However, do not rush to be disappointed in the breed and refuse to purchase a puppy! Properly trained and socialized on time, Shar-Pei is an excellent companion. They are calm, intelligent, noble, loyal to the family, not prone to fuss, and loud barking. 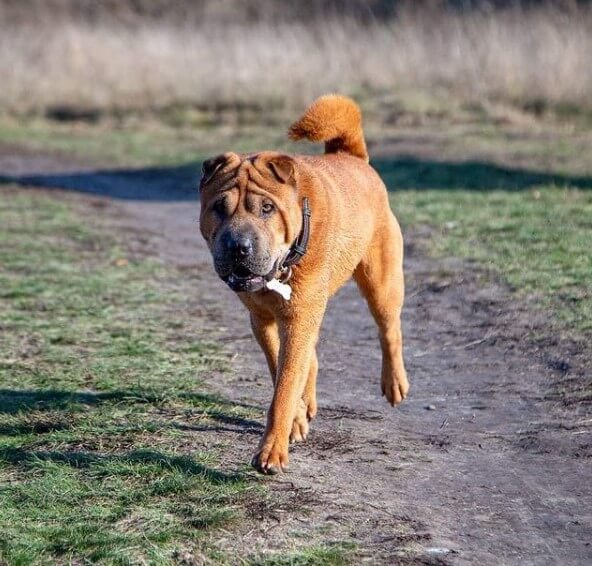 These “giants” are independent and stubborn. In the process of training, patience and firmness are urgently needed, since teaching commands actually becomes a clash between the will of the owner and the dog. If your pet does not meet certain requirements, the problem is not at all a lack of mutual understanding – he does not keep his intellect, and the desire to dominate a person leads to disobedience.

It is important from the first days of the puppy’s appearance in a new family to demonstrate his authority without aggression, clearly delineating the boundaries of what is permitted. The main mistake at this stage can be indulging the desires of the “cute baby”, so similar to a stuffed toy. It will be very, very difficult to regain discipline after you show weakness!

In addition to executing standard commands, the ability to behave in the presence of strangers and other pets should become a mandatory part of teaching “good manners”. Any unmotivated manifestations of aggression are unacceptable here, although one cannot demand from a Shar-Pei an uncharacteristic delight at the sight of any guest. A low-key response is ideal. 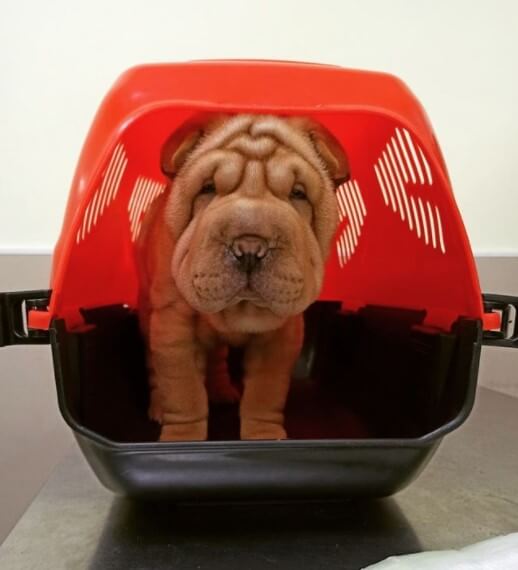 Due to their rather calm and quiet nature, Shar-Pei is well suited for living in an apartment. Moreover, it is preferable, since short hair does not protect against low temperatures, and overheating is bad for the health of the animal due to the peculiarities of the structure of the skin and respiratory tract. 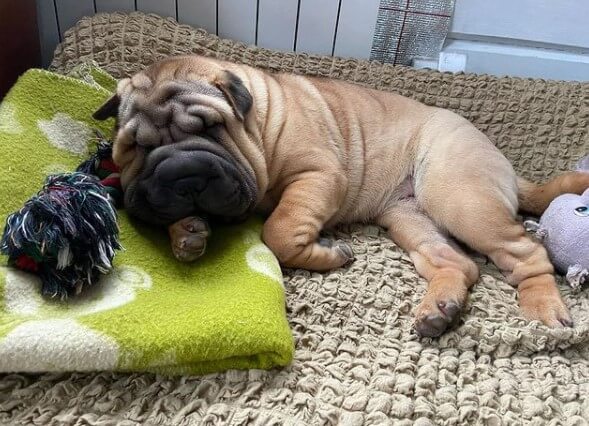 These dogs do not need expensive professional grooming or frequent bathing. Note, however, that during bath procedures (once every 2-3 months, if nothing extraordinary happens), it is imperative to use special shampoos that do not cause irritation and thorough drying with a hairdryer. In short-haired dogs, even seasonal molting is almost imperceptible, it is enough to iron them once a week with a mitten for combing wool purchased from a pet store, and pets with long fur need more careful grooming twice a year using rubber brushes.

What you need to do regularly and diligently is to take care of your dog’s skin. Sweat and fat, dirt, food particles accumulate in the folds, which can lead to dermatitis. You should also pay attention to the ears to avoid inflammatory processes in the shells and the ear canal.

To maintain normal physical shape, Shar-Pei needs only an hour of walks a day. The structure of the skull makes them similar to the brachycephalic type dogs (Bulldogs, Boxers, Pugs), so intense exercise such as jogging and overcoming obstacle courses is contraindicated due to breathing problems. 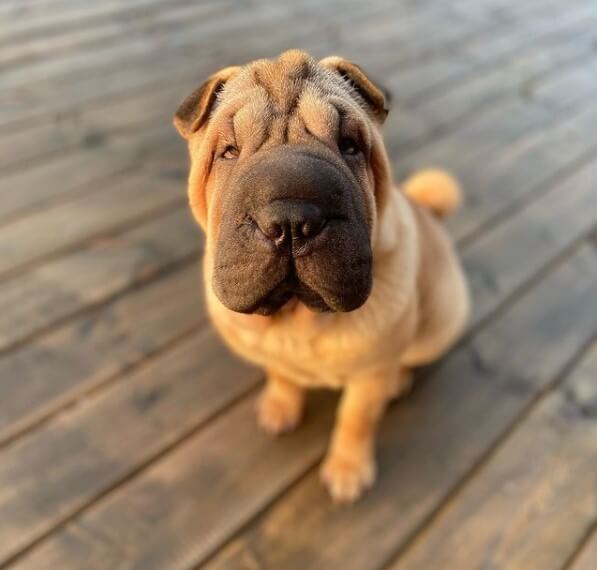 Feeding recommendations do not differ from the standard for all pedigree animals. Quality premium or super-premium ready-to-eat foods, or a carefully formulated regular food diet that balances nutrients. The serving size is individual and depends on the age, size, and physical activity of each animal. It is imperative to provide round-the-clock access to fresh drinking water. 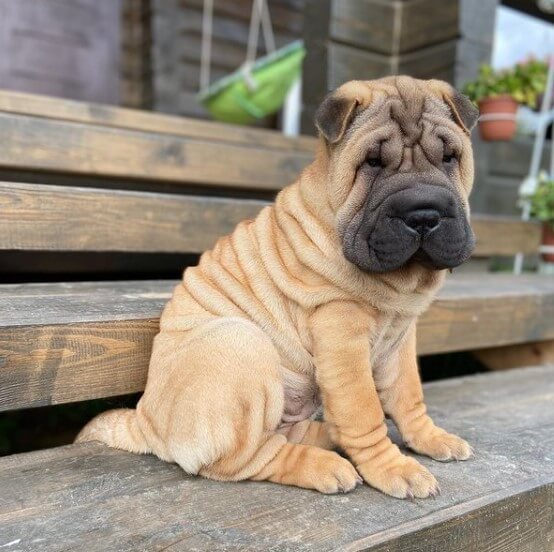 Cynologists classify Shar-Pei as a breed with poor health. The number of possible hereditary and acquired diseases during life is such that some organizations generally raise the question of the advisability of further breeding. The reason for this is largely due to the dishonesty of the breeders, who, in the wake of the outbreak of popularity of these dogs in the 80-the 90s of the last century, were chasing commercial gain to the detriment of animal welfare.

Today, breeders, in close cooperation with veterinarians, are trying to cut off genetically undesirable breed lines, but even in good kennels, puppies with various diseases are born. 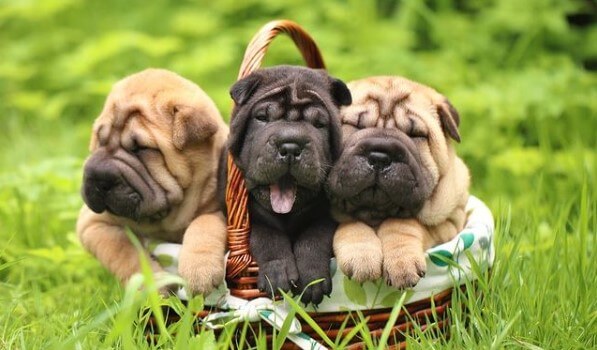 It is worth noting: newborn Shar-Pei do not have folds at all, but by the 6th week of life they accumulate so much that they become like a rubber man Bibendum – a recognizable symbol of one of the car tire manufacturers. As they grow older, the dogs seem to “grow” to a too large skin, only the head and scruff remain covered with large wrinkles. To understand how strongly the folding will be in the future pet and what type of coat is, you need to look closely at its parents.

An important indicator is the living conditions of mothers and puppies. A dark, cramped, not protected from the wind, and all the more dirty aviary, is not in favor of the breeder. Adequate nutrition in the womb and in the first months of life lays the foundation for life, be sure to pay attention to the contents of the bowls!

If the Shar-Peis of the chosen kennel do not participate at all in exhibitions, this is an alarming signal – they have problems either with health and physical indicators or with behavior. It is better to refuse to buy a pet in such a place.

The main thing is that the puppy is easy to make contact with, is not afraid of a person and does not show aggression, and is not suspiciously apathetic.