Koalas are not bears. They do not belong to the group of higher mammals but are POUCH ANIMALS. This means that your offspring ARE born immature and only develop further under the protection of the bag. It is also incorrect to call them koala bears; The correct name is just “Koalas”.

Koalas have 5 limbs on each front paw, but two of them function as thumbs. This allows them to climb better and more easily and to grab their food better. The second and third toes of their hind paws have grown together and formed a “care claw”. 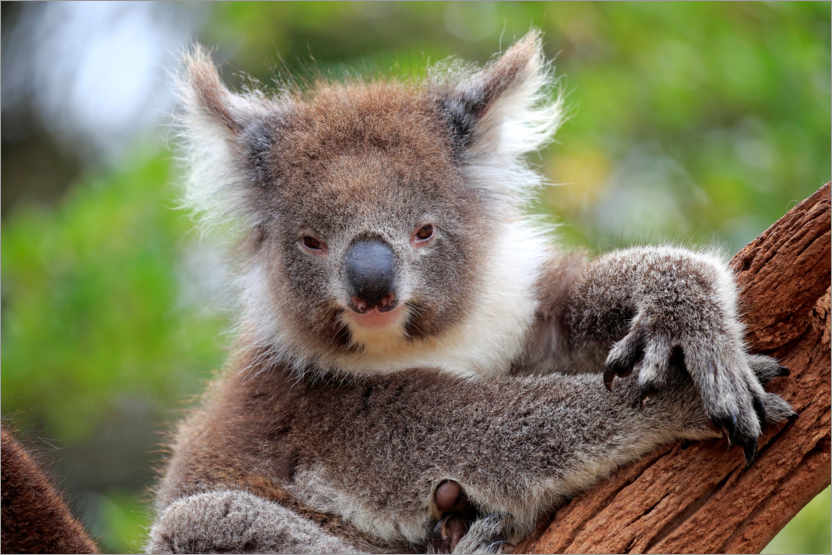 Koalas are largely nocturnal. As a rule, they also sleep during the day and wake up at night, although it can also happen that they sometimes sleep at night and are then active during the day. Koalas oversleep or rest for about 18-20 hours a day.

Some people say the koalas so much because they get drunk from the sleeping eucalyptus oils in their diet. Fortunately, this is not the case. Koalas overslept most of the time because of their low metabolic rate. Since their food is both containing and very poor in nutrients and thus requires a lot of energy for digestion, they have developed strategies to save their energy. Sleeping long is one of those strategies.

There are two types of koalas that differ in size and coat. The koalas living in the south of Australia are larger and have thicker fur than the animals from the north of Australia. This is mainly an adaptation to the colder winter in the south.

The home territory of a koala always consists of several so-called “home trees” that are visited in saved ones. The area covered by these trees is called Heimrevier or HEIMSTÄTTE. Each koala has its own homeland, which in turn overlaps the homesteads of other koalas. Nevertheless, the animals usually only visit each other for mating purposes. The size of the homestead depends on a number of factors, such as B. the sex and age of the animal, or the quality of the natural habitat.

Male koalas have a dark scented gland in the center of their white breasts that secrete a brownish sticky secretion. With this, they rub against their trees to mark their territory.

Koalas communicate with each other through a group of noises. The most amazing thing, the so-called “koala roar”, consists of a mixture of snoring, grunting, and burping sounds.

Young female koalas can usually have a cub every year. However, not all females in a wild koala population give birth every year. Older females in particular often only have offspring every two to three years.

At birth, the young are only about 2 cm tall, have no fur, are blind, and their eyes and ears are not yet fully developed. On its way from the birth canal into the mother’s pouch, the young animal relies exclusively on its sense of smell and touch, its strong front paws and claws, and its innate sense of direction. Once in the pouch, the newborn goes to one of two milk teats, which then swell in its mouth, preventing it from being separated from the food source.

The young animals live in their mother’s pouch for the first 6 to 7 months and feed exclusively on breast milk. Before the young can feed on eucalyptus leaves, they first have to ingest a soft, fecal-like substance called “pap” produced by their mother. The “Pap” enables the mother to transfer important microorganisms from her digestive system to the young, which are essential for the digestion of the otherwise poisonous eucalyptus leaves. The boy only takes the “pap” for a few weeks immediately before it leaves the bag for the first time.

After the young get out of the pouch, they ride on the mother’s back or stomach. However, the young often return to the bag to drink breast milk until they finally no longer fit. The young koala leaves its mother’s home at the age of 1 to 3 years as soon as the mother animal has her next cub.

Female koalas are fully grown after 2 years, while males take 3 to 4 years. By then at the latest they must have found their own home territory; Either in a vacated home of a dead koala or in a new area of ​​the forest. This is one of the reasons koalas need fairly large natural habitats.

Koalas live neither in rainforests nor in desert areas, but exclusively in the eucalyptus forests on the Australian east and southeast coast and on some islands off these coasts. Queensland, New South Wales, Victoria, and South Australia are the only Australian states where koalas are naturally found in the wild.

There are over 600 different types of eucalyptus in Australia, but the koalas only accept a small number as food. Koalas are very picky about their food and have strong preferences for certain types of eucalyptus. Depending on the region, it is sometimes only one and never more than two or three species that are regularly used as a source of food by the resident koalas (preferred food trees). Surprisingly, other tree species (that do not belong to the eucalyptus family) are occasionally used as a source of food or as a place to sleep or stay.

Different species of eucalyptus grow in the different regions of Australia so that a koala from the state of Victoria prefers other eucalyptus leaves than z. B. a Koala from Queensland.

A eucalyptus forest, like a willow tree, can only feed a certain number of koalas. This is also called the maximum load-bearing capacity of the forest. If there are too many koalas in too little forest, too many leaves are eaten, which leads to the death of the trees, which in turn means starvation of the koalas.

A fully grown koala eats between 0.5 and 1 kg of leaves every night, depending on many factors, such as B. the age of the animal, its sex, and where exactly it lives.

For the digestion of the fibrous leaves, the koalas have an extraordinary organ called the “caecum” (appendix). Other mammals and humans also have an appendix, but the “caecum” of the koala is very long (200 cm) in comparison. In this appendix, there are millions of bacteria that break down the otherwise indigestible fiber so that it can be more easily absorbed by the intestine. Despite this adaptation to the eucalyptus as food, the koala is still not able to take in more than 25 percent of the dietary fiber. As a result, it has to eat large quantities of leaves.

Since the koalas also absorb all of the water contained in the leaves, they rarely have to drink anything. In dry periods, however, they can also take water directly, as the water content of the leaves can then be too low.

Chlamydia is a bacteria that occurs naturally in most healthy koalas. Sometimes these bacteria can also lead to diseases of the genital organs and the eyes of weak animals, which is usually fatal. In wild koala populations, however, chlamydia can be viewed as a natural built-in control mechanism that limits the populations to an amount that is tolerable for the forest. Since only the strongest and healthiest animals can reproduce, it is ensured that the trees are not stressed and eaten away.

However, once the natural balance of the koala’s habitat is disturbed, chlamydia can become a problem. The destruction of its habitat exposes the animal to great stress, as it is confronted with all kinds of threats, such as lack of food, cars, dogs, etc. This stress in turn leads in many cases to the outbreak of a naturally non-occurring chlamydial infection.

THE BIGGEST THREAT TO WILD LIVING KOALAS IS THE DESTRUCTION OF THEIR NATURAL HABITATS. The main reasons for this are deforestation, bush fires, and the death of eucalyptus due to disease (forest death).

The Australian Koala Foundation estimates that due to the destruction of their original habitat, up to 4,000 koalas are killed every year by dogs and cars alone.

Australia has one of the highest rates of deforestation in the world. Since the European settlement of the continent in 1788, 80% of the koala’s natural habitat has disappeared forever.

Around 80% of the remaining habitat is now on private property and, although the koalas are themselves protected in some states, almost none of them is under legal protection. The Australian Koala Foundation (AKF) is of the opinion that the Australian government should be responsible for the preservation and protection of the remaining habitat, including on private property.

The AKF has therefore submitted an application to the Australian government calling for the koala to be legally protected as an “endangered species” in its entire natural range. This would be an important step towards a unified National Koala Act across Australia. More information on the National Koala Act can be found here.

The AKF estimates that there are fewer than 100,000 wild koalas left in Australia today. Most of their natural habitat has already been irretrievably lost. This makes it all the more important to protect the remaining forests!