Although hamsters do not have any attack strategies, they have developed many other behaviors that owners should know.

Contents hide
1 Hamster speech
2 Understand the hamster’s body language
2.1 Get up on your hind legs and scent
2.2 Stand up on hind legs and let paws hang down
2.3 Standing up on their hind legs, showing their teeth, lifting their paws and bristling with fur
2.4 Clean
2.5 Stretch
2.6 Yawning
2.7 Tooth sharpening
2.8 Squeak
2.9 Crawling, flat on the stomach
3 So the shy hamster loses his fear

Hamster’s body language is fairly easy to read. We will explain to you how you can approach your hamster in a targeted manner, how to correctly interpret its behavior and how to keep the rodent occupied in a species-appropriate manner.

Hamsters have a wide repertoire of sounds they use to communicate with each other:

Why don’t you try to find out what noises your hamster makes in different situations and what he wants to “tell” you with them? Not only is this fun, but you also get to know your roommate a lot better.

Get up on your hind legs and scent

The hamster explores its surroundings. He perceives the smells and sounds.

Stand up on hind legs and let paws hang down

The hamster is alert but relaxed.

Standing up on their hind legs, showing their teeth, lifting their paws and bristling with fur

The hamster feels threatened. This is a defensive posture.

On the one hand, this can be interpreted as normal comfort behavior, on the other hand, it can also be interpreted as a skipping action. If something bothers him, but he doesn’t know how to behave – whether to flee or stay – a gesture of embarrassment occurs: cleaning.

When a hamster has had a good night’s sleep and feels very safe, it likes to stretch out in front of its house.

When stretching, the hamster often yawns. He is completely relaxed and does not feel threatened in any way.

The hamster feels threatened. This often happens when two hamsters meet who don’t know each other and therefore don’t like each other.

The hamster is in pain or very scared.

Crawling, flat on the stomach

The hamster is scared, feels insecure and is very worried. He doesn’t want to be seen, so he flattens himself to the ground.

So the shy hamster loses his fear 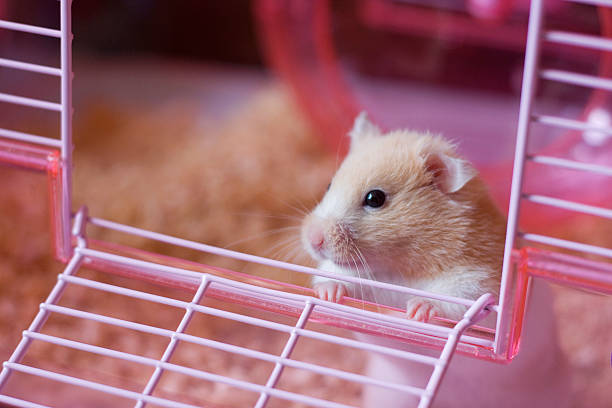 If the hamster has just moved in with you, it will need time to build trust. At first he will only rarely dare to leave the house. You should then just watch out for the hamster

However, if your hamster has been trusting and suddenly become shy, it could be a sign that the hamster is sick. Check out his weight and looks. If its fur is shaggy, it may even have bald spots, or if its eyes are sticky, then you should take the hamster to a veterinarian.

Check your hamster’s health once a week. If the hamster is healthy and still shows such shy behavior overnight, it may also be that something has caused him enormous stress. Has he been roused from his sleep in the last few days? Small children are often impatient with a hamster and may have overwhelmed him.