Does the Boxer-Bulldog Mix pull your heart?

If so, then you probably have a lot of questions.

What kind of pet does he do?

How do you know if it will fit into your lifestyle? 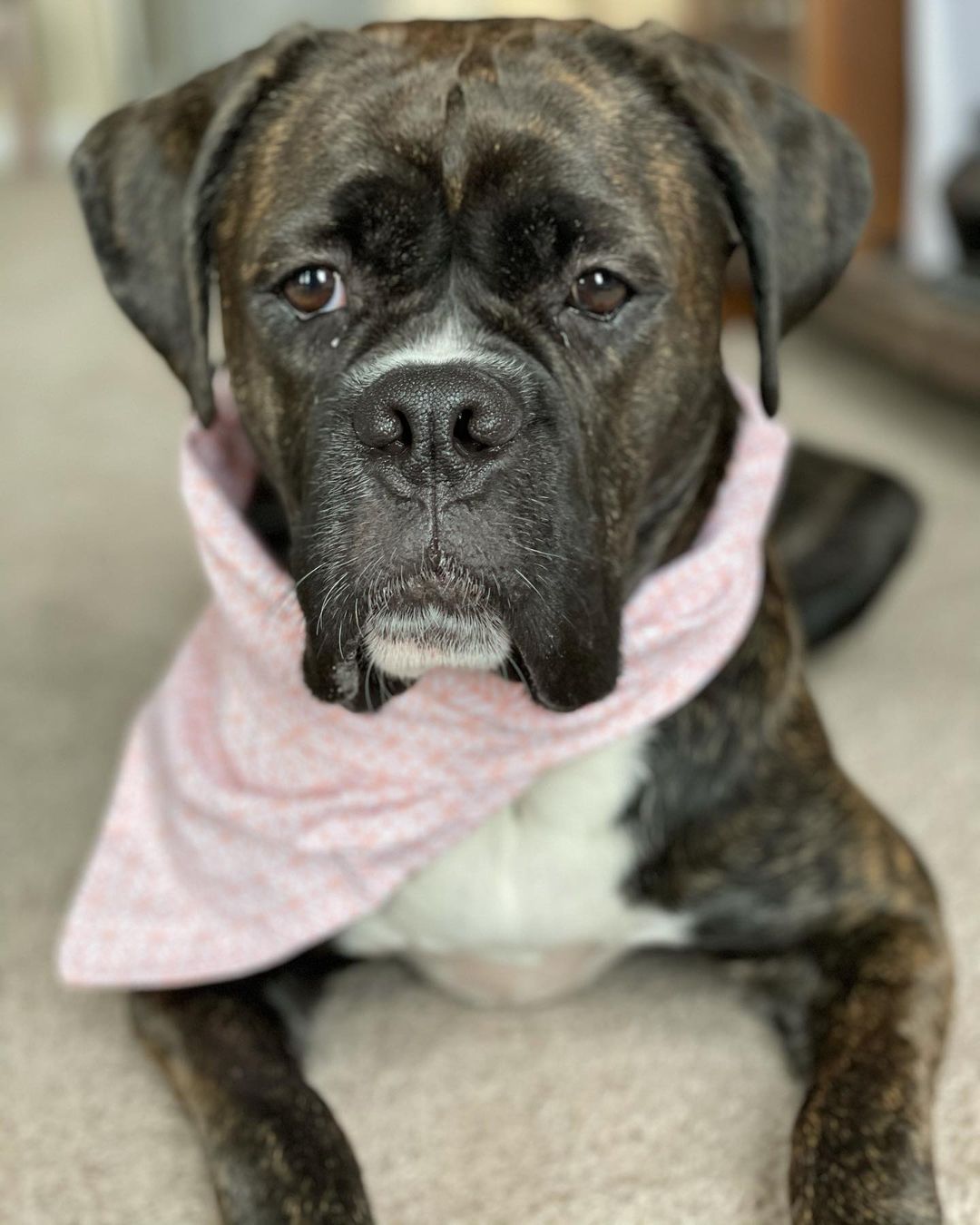 Have you ever heard of a Valley Bulldog?

If so, you’ve heard of a Boxer Bulldog Mix!

The crossbreed’s unofficial name makes it sound like a farm.

Hybrid dogs like the Boxer Bulldog Mix have been all the rage lately.

So what’s up with the crossbreeding controversy?

The recent surge in popularity of “designer dogs” has sparked some debate.

For example, many wonder how breeders can sell crossbreed dogs for the same price as purebred dogs.

Isn’t a mixed breed just a mutt with a fancy name?

In fact, a crossbreed is by definition the designed offspring of two specially selected purebred parents.

A mutt, on the other hand, is more of an accidentally mixed dog with an unknown background. 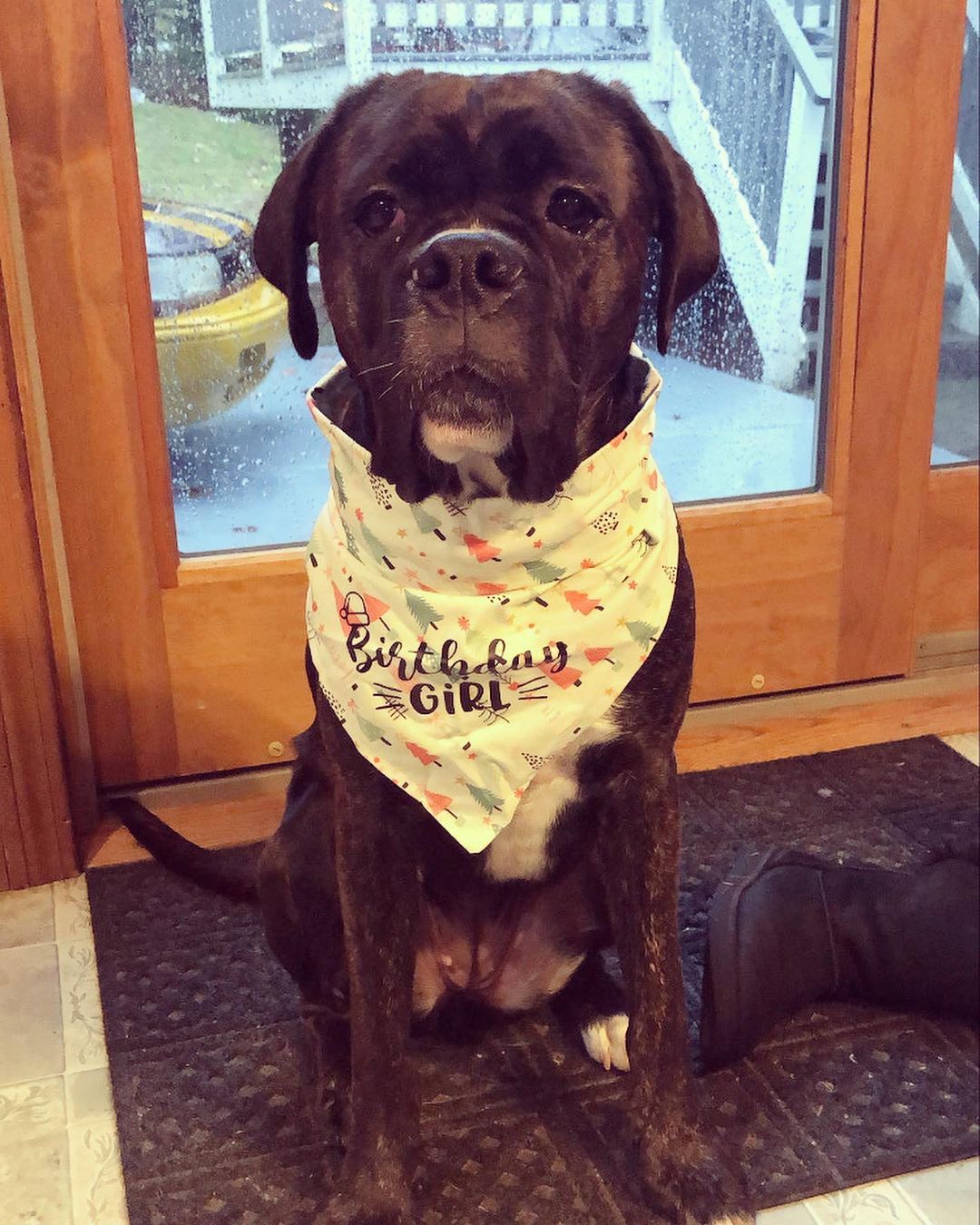 To learn more about the differences between mutts and crossbreeds, visit us here.

But what about crossbreed health? Is it true that they are actually healthier than purebreds?

While it’s an unfortunate truth that hereditary diseases continue to plague purebred dogs.

This is due to overbreeding in dwindling gene pools. Skeptics insist that crossbreed dogs aren’t healthier.

However, those who advocate crossbreeding claim that the practice actually reduces the likelihood of inheritable diseases.

History of the Boxer Bulldog Mix

The Boxer Bulldog Mix is ​​what many consider to be a newer generation hybrid.

This essentially means that its story is still a work in progress.

But do not worry!

We can learn more about him by simply looking into the history of his parent breeds.

Let’s start with the boxer.

History of the boxer 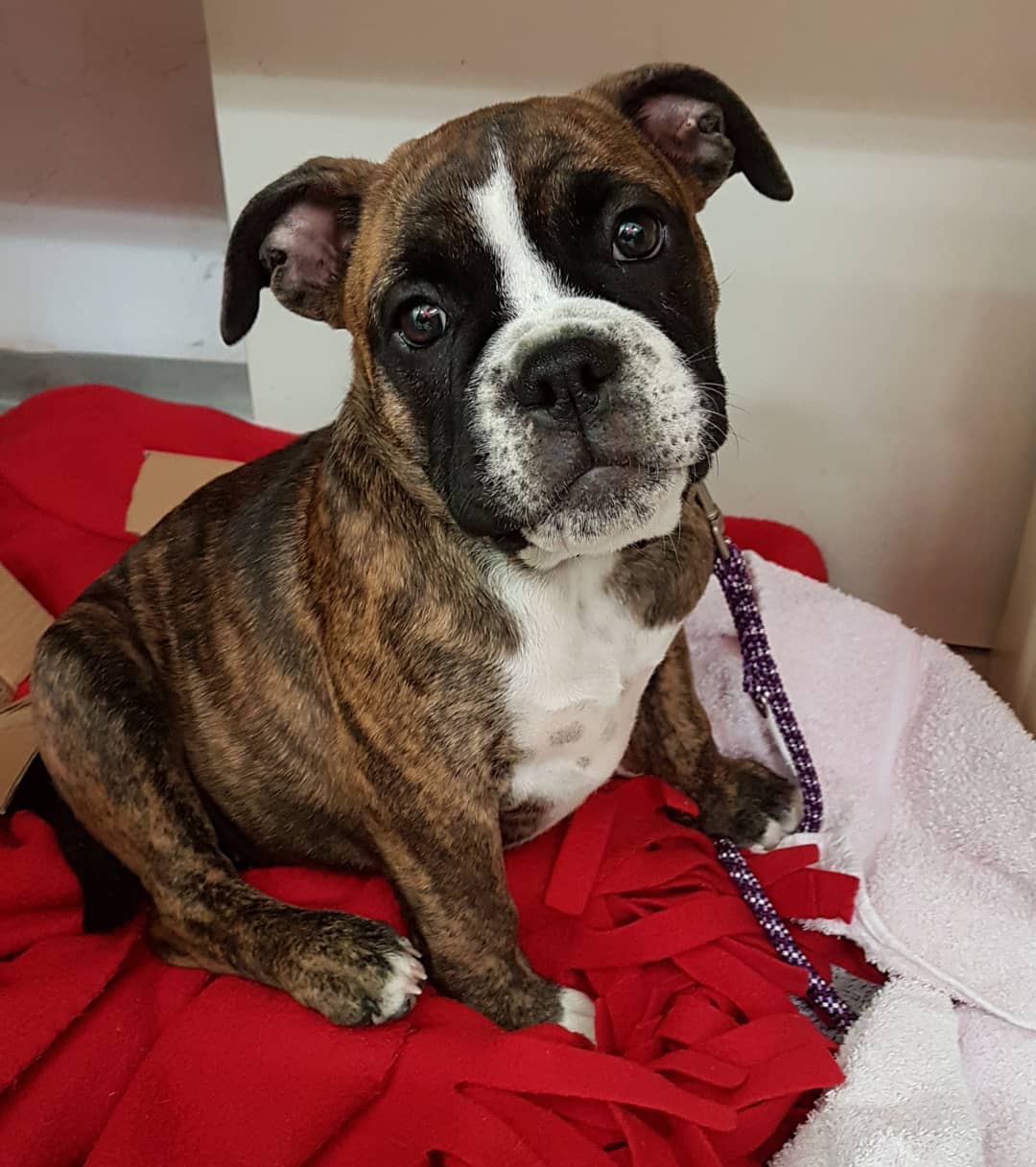 The boxer is a favorite for dogs.

It’s easy to see why, with the boxer’s sweet personality and playful disposition.

But did you know that the boxers come from ancient war dogs of the Assyrian Empire?

With a story dating back to 2,500 BC. The ancestors of the boxer began to hunt lions in a “game of kings”.

However, today’s boxer is most likely to come from larger German dogs known as Bullensbeisser dogs, dating back to the 19th century.

These dogs were used by nobles in the Middle Ages to hunt large games such as bison, wild boar, and even bears.

With the tradition of big game hunting, the need for these giant breeds also decreased.

This led to the boxer, which was bred by German dog lovers from Bullensbeisser’s.

They were crossed with the Bullensbeisser with smaller mastiff breeds from England.

In many ways, a boxer is a man of many occupations.

His sweet and desirable temperament even made him a great service dog!

History of the bulldog

The bulldog is originally from England.

Here it was created for the cruel and violent sport of bull-baiting during the 13th century.

The bulldog had to have immense courage, resilience, and shockingly high pain tolerance.

The banning of the sport in the 1830s nearly led to the extinction of the bulldog, which was later unemployed.

Fortunately, enthusiasts have decided to convert the breed from a fighting dog to a family dog.

The conquest was a success because the bulldog carried out the breeders’ lovable temperament and meticulous processing.

The bulldog was officially registered by the AKC in 1886.

Today there are three species of a bulldog, including the English bulldog, French bulldog, and American bulldog.

The English bulldog continues to be a staple of England and is also the proud mascot of some universities.

However, a potential Bulldog or Bulldog Cross owner should know that this Bulldog standard is no longer the same as it used to be.

Due to overbreeding and irresponsible breeding practices, today’s bulldog suffers from a number of health and skeletal problems, but we will cover those below.

First, let’s talk about the personality traits of the Boxer Bulldog Mix.

What is the Boxer Bulldog Mix Temperament? 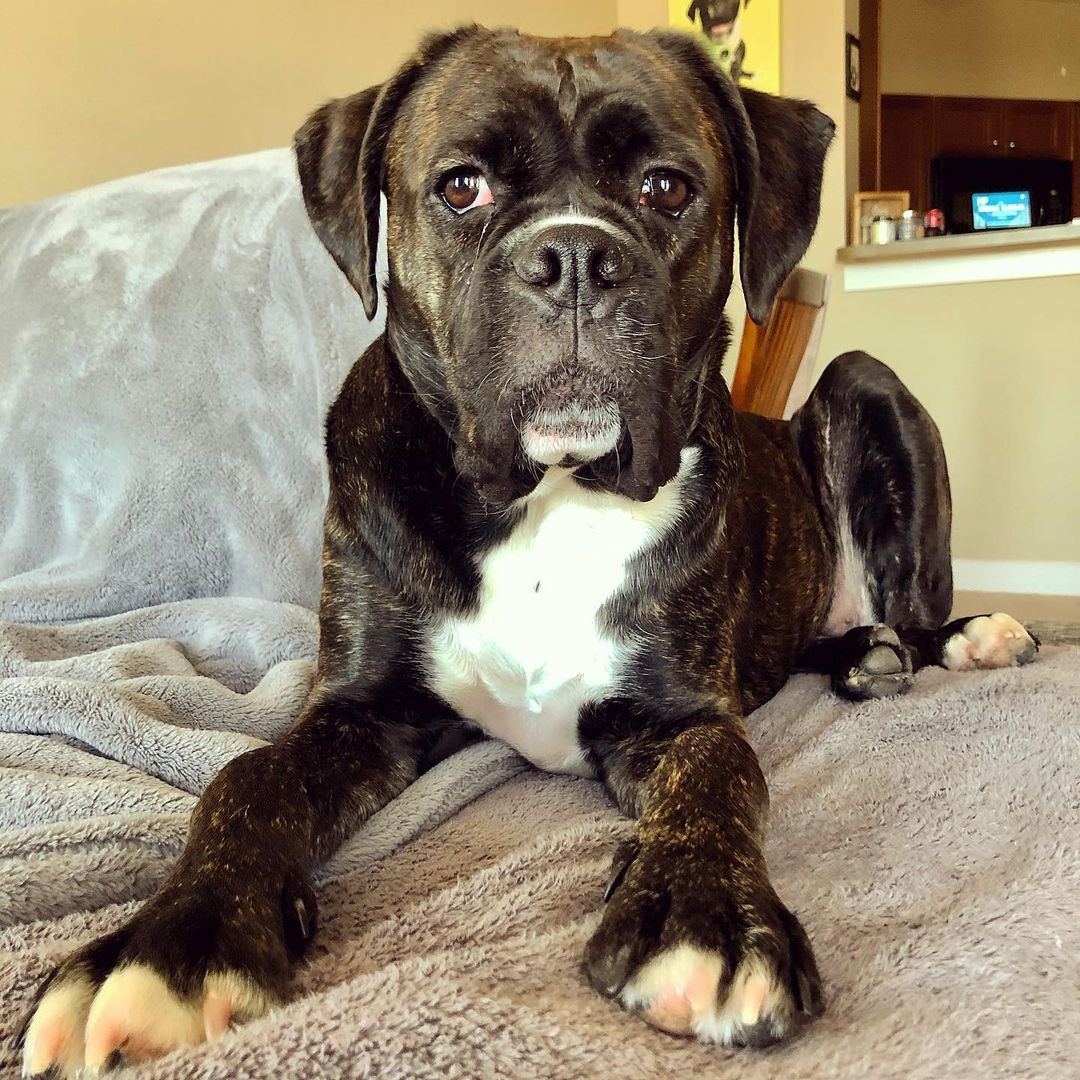 It’s important to know that mixed breeds can inherit a number of temperamental traits from their purebred parents.

The Boxer Bulldog Mix is ​​a playful, curious dog that is very intelligent and easy to train.

However, there are other aspects of his personality that are left to chance and genetics.

For this reason, we always recommend early socialization and obedience training in your dog, starting as early as puppyhood, to ensure he becomes happy, healthy, and rounded.

Still, it’s always wise to take a look at the temperamental traits of your Boxer Bulldog mix’s parent breeds to get a better idea of ​​what you could achieve in terms of personality.

Let’s start with the boxer.

Boxers are more intelligent dogs, although at times they are insensitive to something monotonous.

Due to their playful nature and natural curiosity, they love adventure and thrive with fun and creativity.

The boxer is a particularly high-energy breed that needs early training in socialization and obedience from puppy age to ensure that its energy is used positively.

And while the boxer is known to get along well with families and children, he may be too hyperactive for very young kiddos.

He also doesn’t always get along with dogs of the same sex, although boxers of the opposite sex get along very well.

The boxer is gossip and needs to be taught to stay down and not jump on people.

So what about the bulldog? 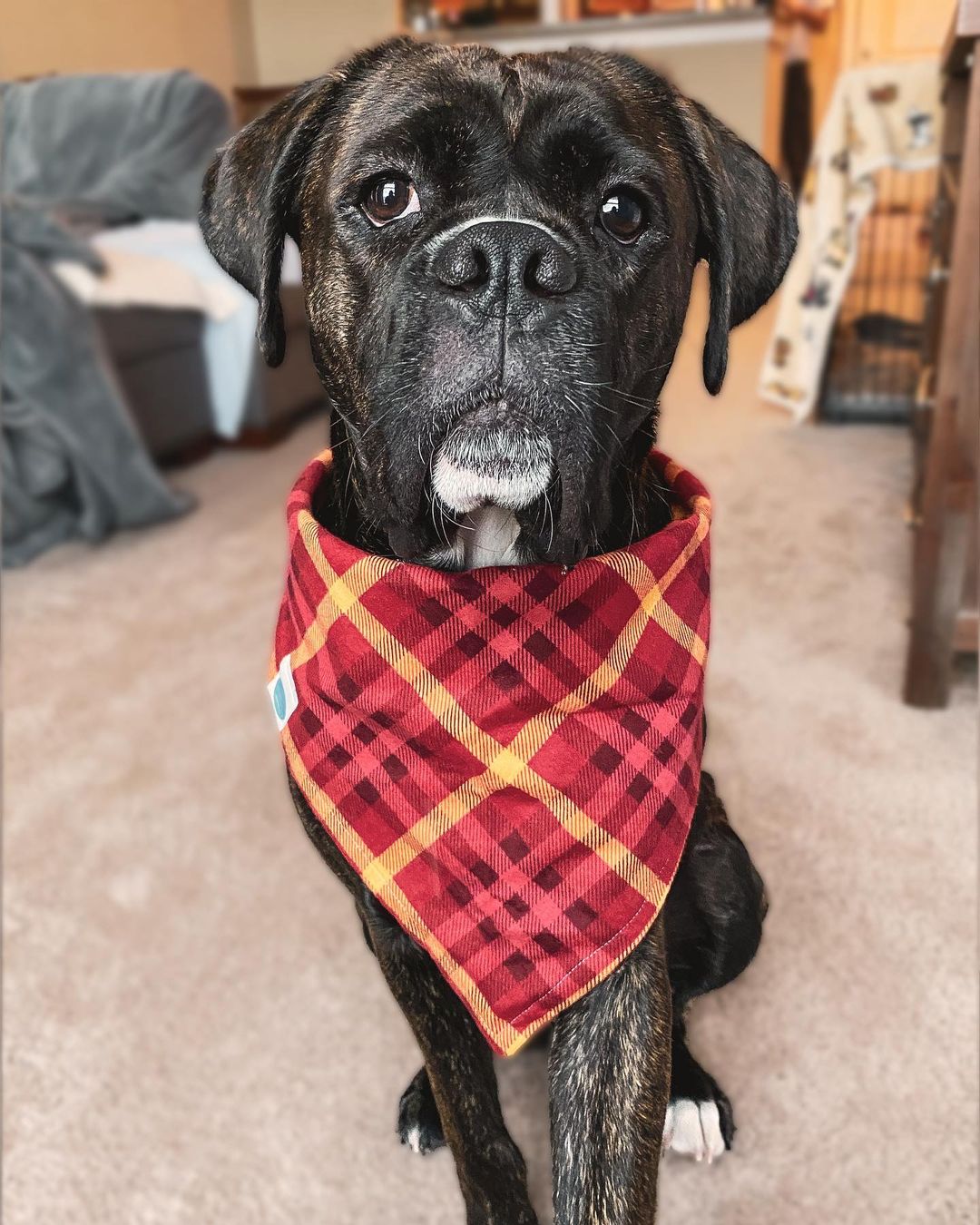 The bulldog is known for its courage and resilience.

Even so, this breed is known to be calm and affectionate.

They make wonderful with children too.

However, the bulldog must be properly socialized early on, otherwise, it may be prone to territorial behavior.

Bulldogs make excellent watchdogs and are fearless when it comes to protecting their families.

And while they get on well with other dogs they grew up with, they may not get along with dogs they don’t know.

The bulldog bonds closely with families and needs to be around people to be happy.

He is an avid dog who is easy to train and likes to learn new tricks.

However, the bulldog is inherently a chew.

This has to be addressed early on in puppyhood.

Provide him with plenty of easy-to-buy toys to keep his mouth occupied when he’s bored.

Experts also suggest a lot of mental stimulation prevents this dog from getting bored and subsequently becoming destructive.

As mentioned earlier, early training in terms of socialization and obedience will be crucial when it comes to your Boxer Bulldog mix.

But what does the Boxer Bulldog Mix look like? Continue reading!

Just like with temperament, the appearance of your Boxer Bulldog Mix will be left to chance and genetics depending on which purebred parent it takes the most.

Let’s take a look at your options. 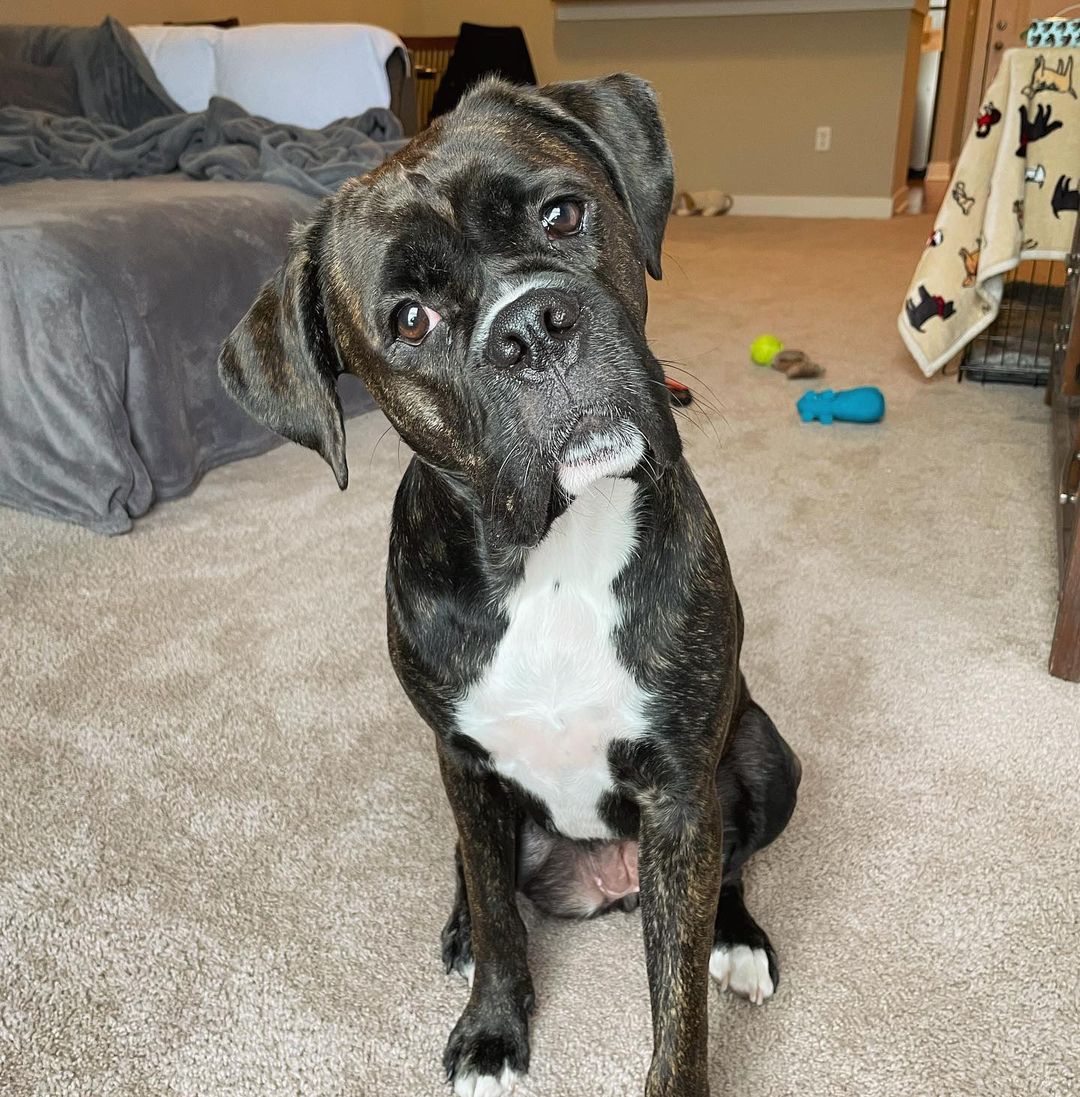 The boxer is a large, muscular dog with a slim coat that comes in three standard colors:

He is 21.5 to 25 inches tall and weighs around 50 to 80 pounds. Typically he has an erect nose and watchful, expressive eyes.

Boxers can either have a docked tail or a long tail and cropped ears or long ears.

Characteristics of the bulldog

With a sturdy, compact build, the English Bulldog weighs 40-50 pounds and is approximately 14-15 inches tall.

He has a short coat that is moderately shedding and comes in a variety of colors including:

The American bulldog is taller than the English bulldog, measuring eight to eight inches and weighing from 60 to 130 pounds.

This is a dog that is made up of muscles and has a broad chest, long tail, and droopy or cut-off ears. 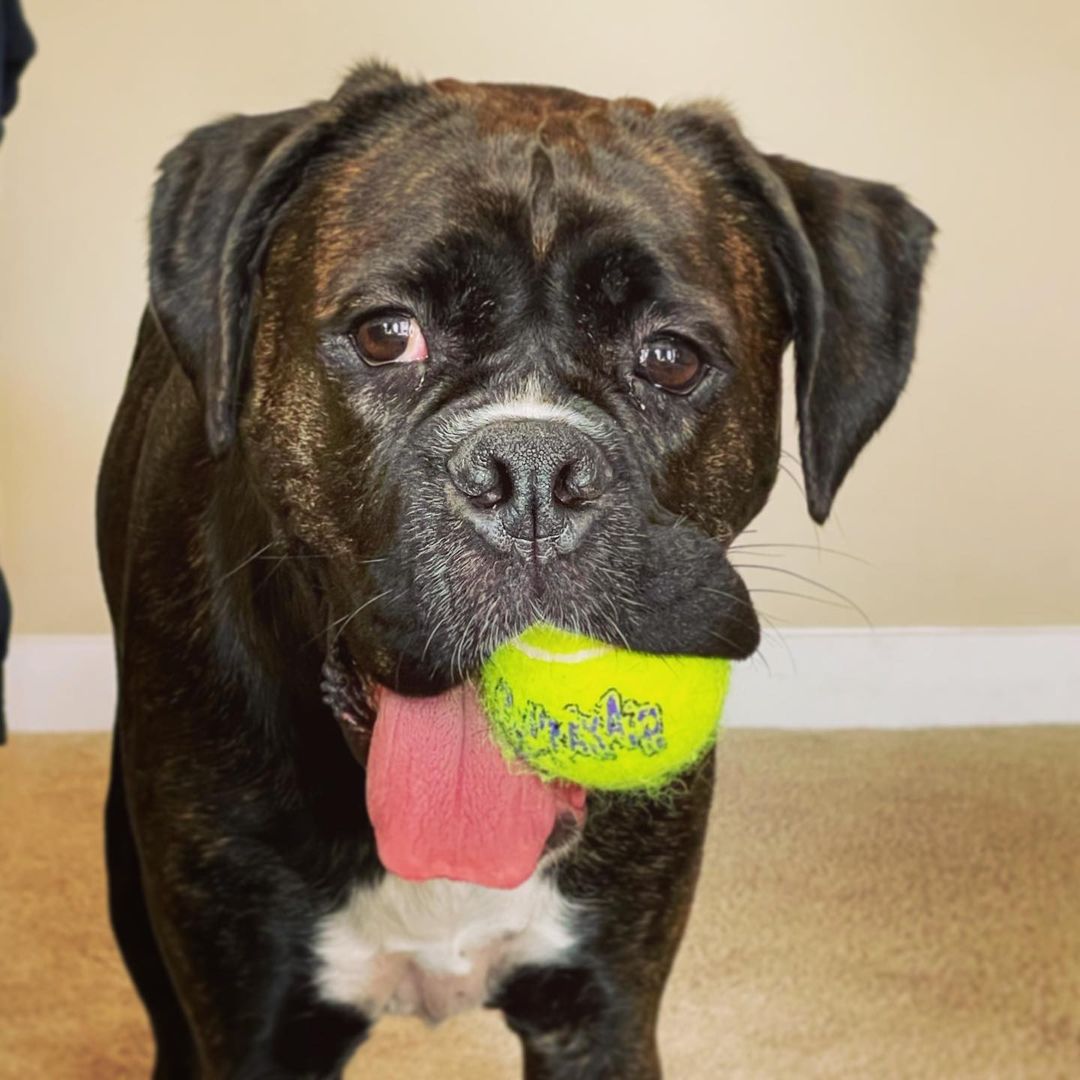 Fortunately, both the boxer and bulldog have similar coats that shed moderately and only require brushing about twice a week.

You will also need to regularly trim your Boxer Bulldog Mix dog’s nails to keep them from breaking or breaking.

Speaking of infection, let’s talk about the health and lifespan of your Boxer Bulldog Mix.

Lifespan and Health Concerns of a Boxer-Bulldog Mix

The Boxer Bulldog Mix could be prone to inheriting any of the same health issues that predispose its purebred parents to.

While we always recommend an early medical screening process to prepare for or even avoid any future health issues in your Boxer Bulldog mix, we also recommend investigating the health issues that affect its purebred parents.

Let’s start with the boxer, which has a lifespan of 10-12 years.

The boxer is most prone to cancer, aortic stenosis, and arrhythmogenic right ventricular cardiomyopathy.

He can also suffer from hip dysplasia, hypothyroidism, epilepsy, degenerative myelopathy, and gas.

Bulldogs have a lot of health problems.

Its lifespan is incredibly short.

He is prone to such problems as

Screw “tail” is another condition to watch out for in the English Bulldog as its curly tail can cause back pain for them.
Remember that your Boxer Bulldog mix may be prone to the health issues listed above.

How do I train and train the Boxer Bulldog Mix? 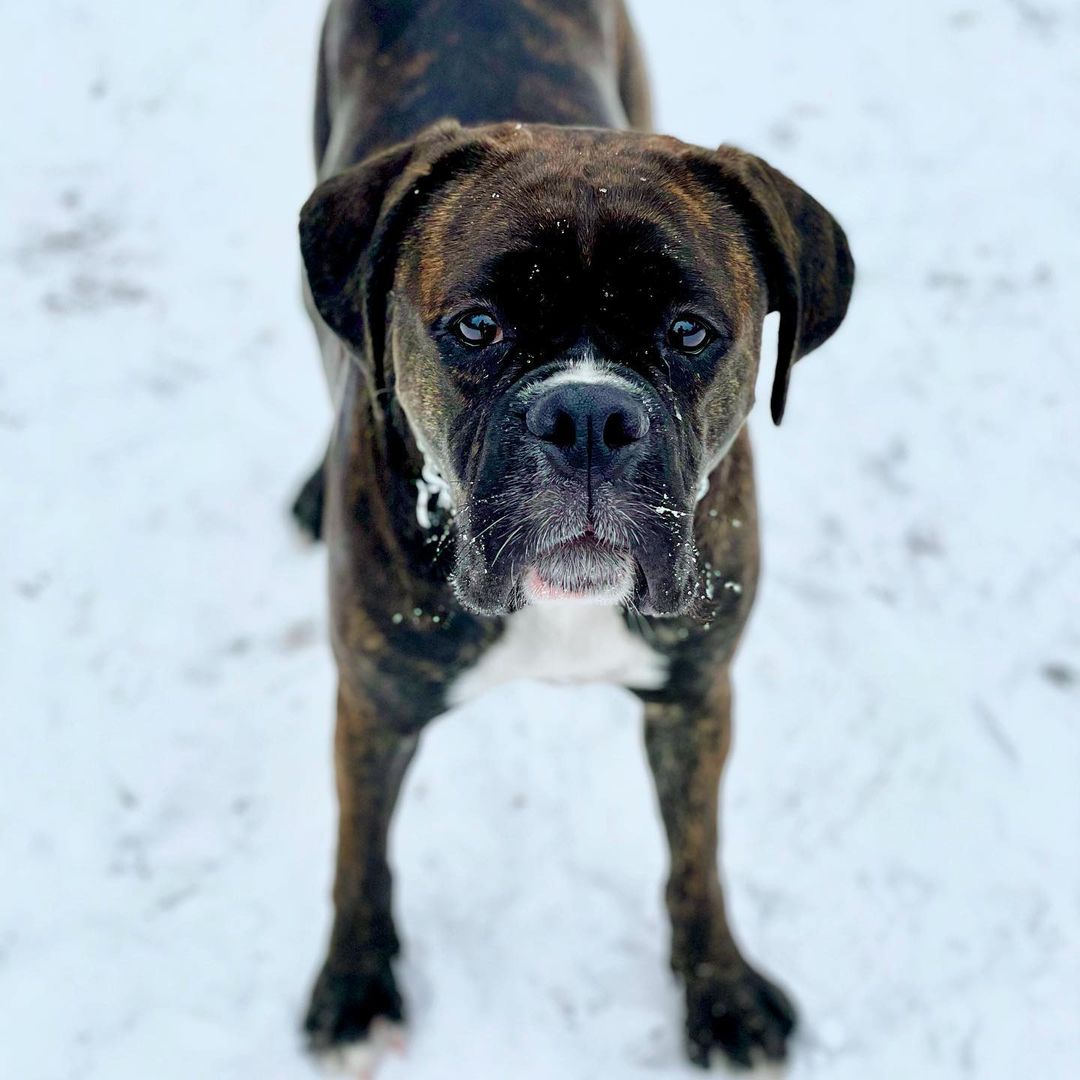 Your Bulldog Boxer Mix dog is a combination of two breeds with very different levels of activity.

For example, the boxer needs a lot of exercises every day.

It must be allowed to run freely so that it is best suited to homes with large, fenced-in backyards.

He should always be walked on a leash when he comes out of the house as his instinct to hunt is still strong.

He can go straight into a busy street after squirrels or rabbits.

Boxers can be easily trained if the training is positive and fun.

These are very clever dogs with an independent dash and a knack for problem-solving!

The American Bulldog is also an active, energetic dog.

He needs a lot of mental and physical stimulation to stay healthy and strong.

On the other hand, the English Bulldog is considered a somewhat “lazy” breed.

This strain is prone to being overweight and needs encouragement to stand up and play around.

He needs moderate exercise but may be intolerant.

Be careful not to overuse this breed or its offspring as this can cause breathing problems.

In addition, the English Bulldog does not tolerate water and is not a swimmer.

Owners should never leave him in the water lower than his elbows.

How do you know how to properly train your Boxer Bulldog mix?

Take care of your crossbreed and see what temperament he inherits. Is he active and playful or is he a couch potato?

In any case, your Boxer Bulldog Mix needs to be trained daily.

The level of exercise depends on his health, level of activity, and what temperament he inherited from his purebred parents.

Is the Boxer Bulldog Mix the right mix for me?

The Boxer Bulldog Mix is ​​a cross between two wonderful personality types.

However, due to his Bulldog parent’s health issues, we cannot recommend him.

A few boxer mixes with a better chance of a happy healthy life are: