Hungarian Vizsla evokes a feeling of nostalgia for those times when the aristocratic society paid special attention to hunting accompanied by graceful and lean dogs. The animals helped to find wounded prey thanks to their keen sense of smell and keen eyesight. Now hunting grounds exist only on the pages of books, but Vizslas continue to be popular. A neat yet muscular physique, smooth amber hair and a meaningful look – these dogs look like statues brought to life by a skilled craftsman. Vizslas are loyal and good-natured, not hostile to strangers, but will defend the owner without hesitation. 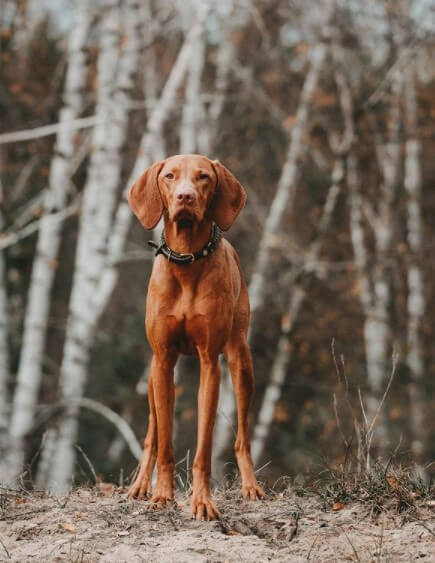 History of the Vizsla Breed 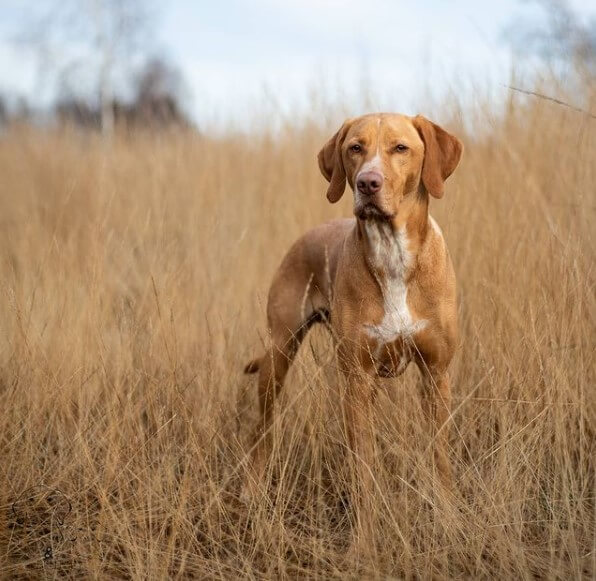 The Hungarian Vizsla comes from the ancient hunting dogs used by the Magyars to hunt, it is a kind of Hungarian Pointer. The ancestors of these pets lived on the territory of Hungary more than 1000 years ago, and the modern Vizsla, of course, is somewhat different from its predecessors, but there are much more similarities than differences.

In fact, now it is difficult to say exactly how long ago these dogs appeared on the territory of Hungary since today experts draw conclusions only on the basis of the available evidence. One of them is a 10th-century engraving showing a sleek, long-legged, thin dog very similar to Vizsla, depicted with a gamekeeper. Another very noteworthy piece of evidence is a chapter in a manuscript book on falconry, which, along with a description, depicts a dog almost identical to the Hungarian Vizsla.

Hunters and dog breeders of those distant times developed the breed in every possible way, with the aim of improving the basic qualities, thanks to which by the end of the 18th – beginning of the 20th century it developed amazing talents for hunting. Dogs were highly prized by aristocrats, and each nobleman had a pack or at least a few individuals that were constantly used for hunting. In addition, these animals could develop tremendous speed, thanks to which during the First World War they were used to deliver reports.

However, when the war ended, the breed was on the verge of extinction, as the consequences for many European countries where these dogs were developed were dire. Only through the great efforts of dog breeders, the Hungarian Vizsla breed of dogs has survived to this day. Although, these dogs had to endure another significant blow to their population – World War II.

Around the beginning of the fifties of the 20th century, the Hungarian Vizsla began her journey to the United States and then to Great Britain. The first breed club in America was founded in 1954. It is worth noting that even in the fifties, the Hungarian Vizslas had a slightly different appearance, in particular, they had longer muzzles, in addition, there were individuals with slightly elongated ears. The breed is not very popular in the world, but! Vizsla is the first and today the only dog ​​in the world that was a five-time champion – in conformation, in the field, in obedience, and agility. 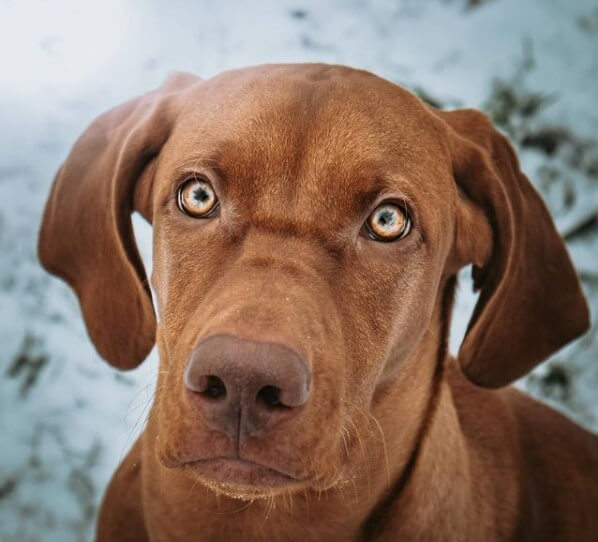 The Hungarian Vizsla is a slim, athletic dog with a narrow head and long neck. The head is in proportion to the body, the skull is wide, slightly rounded. The ears are long, with rounded tips, drooping and V-shaped. The limbs are long, the chest is voluminous, the abdominal cavity is pronounced. The tail is medium, the coat is short. The color includes shades of reddish-golden. 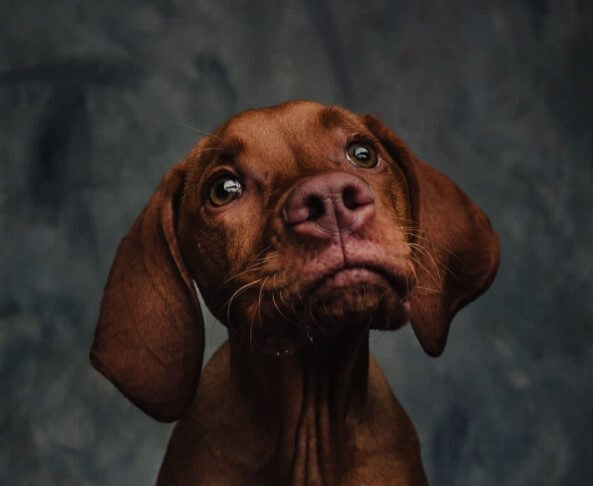 The Hungarian Vizsla is one of the few hunting breeds that are suitable for novice dog breeders. These pets are rightfully considered universal, and all thanks to a discerning mind, dedication, activity, friendliness, and sociability. Balanced dogs can be cultivated as excellent companions not only for hunting but also for everyday life.

Hungarian Vizsla truly enjoys being with family members, but only one person is seen as the owner. With this honorary “title” comes a new responsibility – close contact with the pet. Short-haired dogs are jokingly called “Velcro” as they accompany their owner even within the apartment. Wherever you go – to the kitchen, to the bedroom, or to the bathroom – the animal will not leave this outing without attention. A locked room is an unreliable obstacle: the dog is more likely to curl up in a ball and wait for your return than to retire on his own business.

The ideal host for the Hungarian Vizsla is a sporty and cheerful person, and even better – a hunter. Dogs do not like to mess around: for them, an active walk is more attractive than a long sleep on the couch. Moreover, the developed intelligence literally “obliges” animals to resort to daily mental and physical stress. The lack of attention on the part of the owner will result in regular pranks, among which a gnawed sofa will seem like a trifle of life.

This breed is not suitable for people who need a ferocious guard. The most an outsider can count on is loud barking and warning growls. Vizsla will not run into the attack without a good reason, and even more so if the owner is not in danger. They prefer defensive tactics. A special training course will help to improve the guarding qualities of the dog – necessarily performed by a professional dog handler!

Since Hungarian Vizsla have a playful disposition, they will be a great company for children. Representatives of the breed are patient and gentle, ready to actively participate in the proposed games and at the same time not show the slightest hint of fatigue. However, you should not leave the child alone with the dog: due to its large size, strength, and activity, it can inadvertently push a little friend and thereby injure him. Otherwise, Vizsla is an understanding and sensitive pet that can easily cope with the role of “nanny” while you relax after a working day.

The lively temperament of the Hungarian Vizsla is noticeable on a walk, and especially outside the city, in the field, or on the river bank. Dogs seem to throw off invisible shackles and begin to hunt. No matter how far the dog runs in search of prey, it will never lose sight of the owner. Representatives of this breed work “in public”, wanting to hear praise and approval. Vizsla is especially delighted with the opportunity to swim. Do not interfere with your pet’s instincts – and he will thank you with wet “kisses” and a calm evening after a busy day! 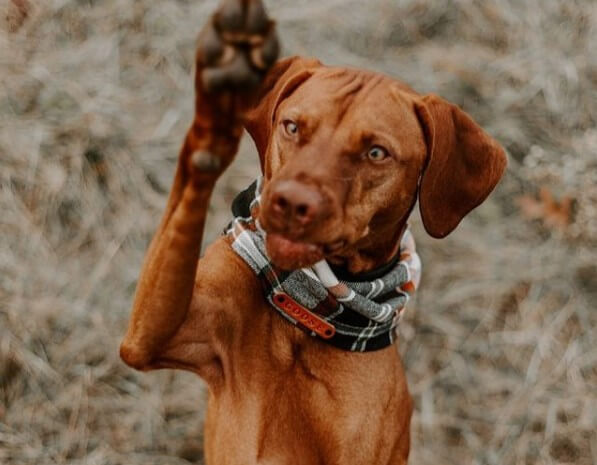 The Hungarian Vizsla dog, due to its open and gentle nature, rarely creates problems in learning and accepts training well. Due to the high level of understanding and close contact with humans, the dog learns well, quickly learns the material, and remembers commands well.

They can be taught not only basic but also complex commands, in addition, the breed has innate, purely hunting skills, which many owners diligently develop. You need to remember that the Hungarian vizsla, due to her gentle nature and love for people, categorically does not accept cruel methods of treatment, rudeness, beatings, and the like. Such things should be excluded from the learning process. 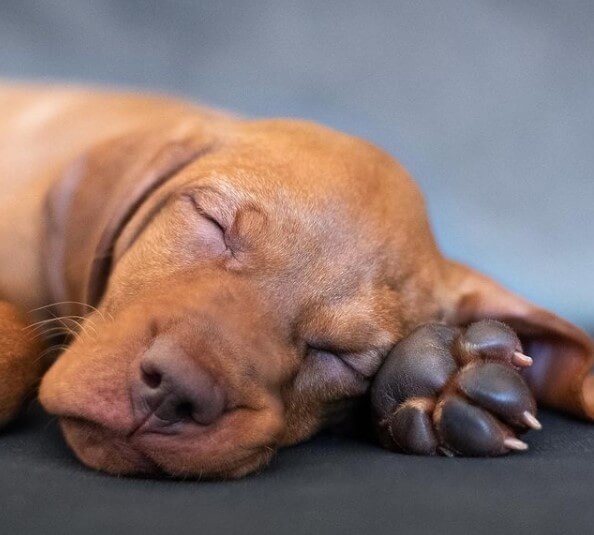 Hungarian Vizsla is a smooth-haired dog, and therefore it is necessary to comb it once a week and this is enough. The animal is bathed at least once a week, claws are trimmed three times a month, eyes are cleaned daily, ears – 2-3 times a week. Please note that the breed is very sensitive to cold, and therefore in winter, you must definitely dress when going outside. 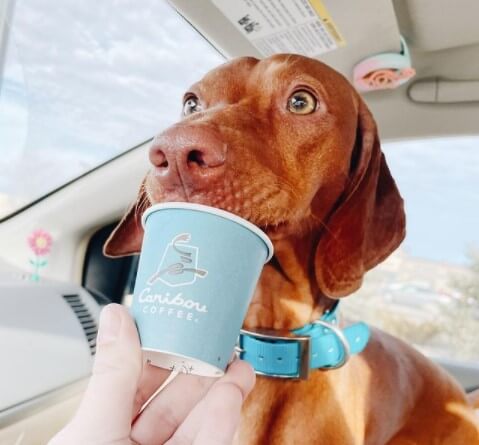 Hungarian Vizsla has no special requirements for nutrition. The main conditions are low fat and caloric content of foods, as well as the presence of nutrients necessary for the full development of the dog. Lean meat (boiled or scalded with boiling water) is an indispensable component of a cop’s natural diet. It must be supplemented with cereals, seasonal vegetables and fruits, fermented milk products, and boiled eggs (twice a week). Vizsla owners recommend adding vegetable oil (no more than 1 tbsp) to the animal’s food every day: this will have a beneficial effect on the condition of the coat. To replenish fatty acids, feed your dog fish oil.

Since this breed is active, the dog’s bowl should be filled with fresh water daily, preferably bottled. 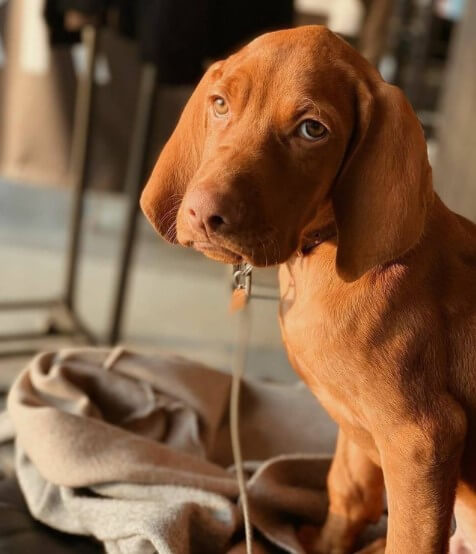 The Hungarian Vizsla dog breed has a tendency to some diseases, like other breeds. Among the diseases: 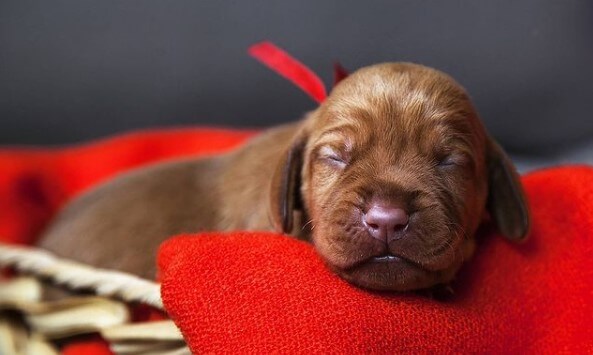 The first step to getting a healthy dog ​​is finding a specialized kennel. Private breeders offer a lower cost, but at the same time, they do not guarantee the good health and balanced psyche of the Hungarian Vizsla.

The next stage is a conversation with the breeder. Ask him to tell you all the nuances:

Most often, puppies are put up for sale at 1.5-2 months. At this age, babies have already learned to eat on their own, have acquired the skills of primary socialization, have grown strong enough, and are ready for a new life without maternal care. Buying a Vizsla as a young person will result in many problems, including an unstable psyche and weakened immunity.