The noble gray coat and the amber eyes make the Weimaraner absolutely unique. The quite young hunting dog breed from Germany is increasingly finding its way into families. Here in the profile, you will learn everything about the history, the character, and the attitude of the breed.

Contents hide
1 History of the Weimaraner
2 Traits and Character Traits
3 How Do I Keep a Weimaraner?
3.1 Considerations before purchasing
3.2 Consistent education of the puppy
3.3 Activities with the Weimaraner

History of the Weimaraner

In general, little is known about the ancestors of the Weimaraner. Initially, the breed was rare and known locally around the city of Weimar in Thuringia. Here hunters and foresters bred the pretty hunting dogs. There is evidence that Grand Duke Karl August of Saxe-Weimar-Eisenach kept a few silver hunting dogs at his court in Weimar as early as the beginning of the 19th century. The breeders of that time did not attach great importance to a uniform appearance and there were also long-haired representatives, which are rather rare today. It was not until 1897 that the Weimaraner Klub e. V. the silver-grey dog ​​according to a uniform standard. 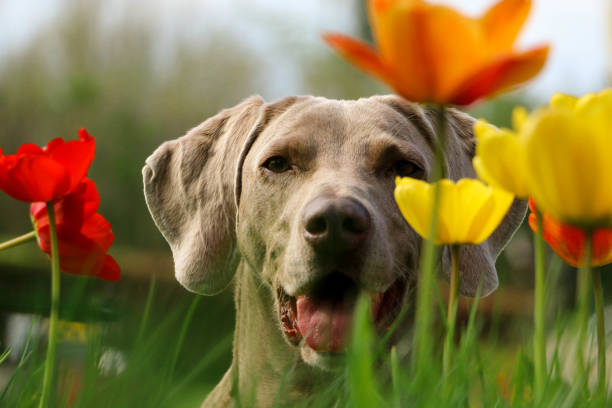 Since the studbook was entered, the breeders have not crossed in any foreign breeds, making the Weimaraner the oldest German pointer breed. In the United States, President Dwight Eisenhower’s bitch made the breed more popular in the 1950s. The Americans breed the dog mainly for appearance and as a well-behaved family dog. In Germany, on the other hand, breeding dogs require a hunting performance test and breeders mainly give their puppies to hunters. Because of its noble appearance, more and more people want to keep a Weimaraner as a family dog. The FCI assigns the breed to FCI Group 7.1 Continental Pointers.

The Weimaraner is an extremely intelligent and confident hunting dog with a pronounced predatory edge. This means he will track down and kill the game on command. Dogs are wary of strangers and need time to warm up to new people. The protective instinct is very strong and the self-confident dog does not hesitate for a second to defend its family or its territory. Despite this, he does not have an excessive temper. The hound is very affectionate and with good training can make a great partner for life. In general, you shouldn’t leave the Weimi alone for long periods of time, as it gets nervous and barks.

How Do I Keep a Weimaraner?

First and foremost, the Weimaraner is a pure hunting dog that wants to be used accordingly. For this reason, registered breeders of the Weimaraner Club e.V. prefer to give their puppies to hunters and foresters. In order to preserve the hunting dogs as such, we do not attach great importance to beauty breeding. However, if you deal intensively with the dog and give it enough exercise, it can be happy as a pure family dog ​​even without hunting activities. But you should have enough experience with dogs so that the Weimi doesn’t overwhelm you.

So if you decide to get one of the silver hounds, you should go to a registered breeder. You may need to convince him that you are capable of holding the dog properly. Be careful when blue or black puppies are sold as a specialty, as they are actually disqualified from the breed standard. For a purebred and healthy puppy, you should calculate around 1000€. If you’re on a budget and want to do a good deed, check out an animal shelter. Sometimes you will also find one of the gray hounds in need here, which you can give to a new loving home.

Consistent education of the puppy

The Weimaraner is dependent on a permanent reference person who educates him consistently and self-confidently. It is best if you already have dog experience and know the special needs of a hunting dog. Especially if you don’t use it for hunting, you have to get the hunting instinct under control early on. If the strong-willed dog doesn’t accept you as superior, training will be difficult. With a good deal of composure and authority, you should make it clear to the puppy early on who’s in charge. Violence and aggression are totally out of place. In order for him to later get along with other dogs without any problems, the Weimi must be socialized as a puppy. It is best to take the puppy to a dog school where it can get to know other dogs and play.

Activities with the Weimaraner

The Weimaraner wants to live out his innate intelligence and his urge to move. As the original hunting dog, he needs a correspondingly busy alternative job if you don’t get him as a hunting dog. Sufficient exercise and activity as well as mental workload are part of the daily program. Long walks in nature are an absolute must. It is best to also use it for a dog sport such as mantrailing or professional dummy training. The dog likes to fetch from the water and is enthusiastic about search games with nose work. Maybe you can inspire Weimi to go jogging, cycling, or hiking and do some sports.