The West Highland White Terrier is a small, active, and intrepid dog with great confidence. He is not only a well-known face of the food brand Cesar but also a popular family dog. You can find out what makes the breed special in the profile.

In Scotland, terriers have been used to hunt foxes, martens, and otters since the 19th century. The small hunting dogs pursued their prey into the burrow and shooed them out. The West Highland White Terrier is one of the direct descendants of the old Scottish Jagdterrier. According to legend, Colonel Edward Donald Malcolm accidentally shot his Cairn terrier while out hunting. From then on he began to breed only white dogs, which clearly stand out from their surroundings.

The breed became known as the Poltalloch Terrier. The popularity of the robust white terrier increased rapidly and as early as 1905 the first West Highland Terrier Club was founded. The Westie, as it is called for short, gradually developed into a show and family dog. The breed is one of the dogs recognized by the Fédération Cynologique Internationale. She has been assigned to FCI Group 3, which includes terrier breeds including the Westie, a high-legged terrier. Today it is one of the most popular small dog breeds in Germany. The terrier experienced a real boom, especially in the 1990s. 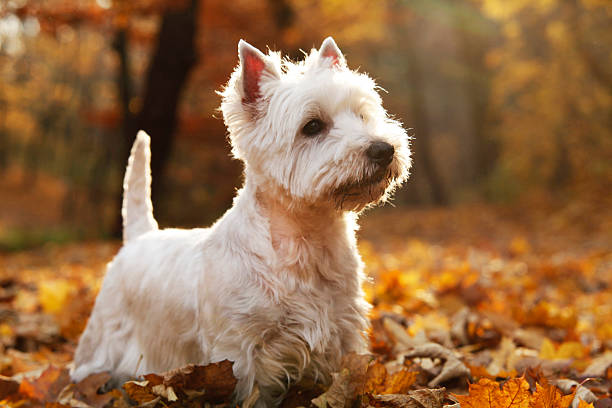 The West Highland White Terrier is a lively, brave, and friendly dog. He has the basic characteristics of a terrier and has a penchant for independence. In addition, the Westies are very loyal and love their families more than anything. They get along well with other dogs and are extremely affectionate. The breed enjoys playing, loves new challenges, and is always up for a laugh. In contrast to other terrier breeds, however, he is not a barker and is not nervous or short-tempered. Nevertheless, the dogs report any unusualness with a loud bark and also loudly welcome visitors. The representatives of the breed generally like to be the center of attention and need a lot of activity. You should not underestimate the Westie because of its size and label it as a lap dog. The hunting instinct is quite strong and you should get it under control early on.

Despite its small size, the Westie is not a beginner’s dog and needs a self-confident, consistent caregiver. With good socialization, he gets along well with children and other dogs and cats are no problem either. Before you buy, you should be absolutely sure that the West Highland White Terrier is the right dog for you. After all, the four-legged friend will remain part of your family for the next 12-16 years.

You will find a lot of dubious providers on the Internet who do not attach importance to the well-being of the dogs and see them as a pure source of money. For this reason, you should take a close look when choosing a breeder. It is best to buy your puppy from a breeder who is a member of the Terrier Club. These breeders have strict guidelines and you are guaranteed a healthy puppy. Of course, this also has its price and you can expect up to 1000€ for a Westie puppy. A good alternative to the puppy is of course a Westie from the animal shelter. For a small fee, you can give a poor West Highland White Terrier a new chance with you.

Even if the small dog does not only have a cute appearance as a puppy, the right upbringing should not be underestimated. He is a real terrier and behaves accordingly. You should pay attention to a consistent upbringing from an early age and also put Westie in his place. Despite its size, the little dog is very self-confident and dreams of taking over the leadership of the pack. If you raise the little rascal properly, he will be an affable and friendly companion.

How Do I Keep a West Highland White Terrier? 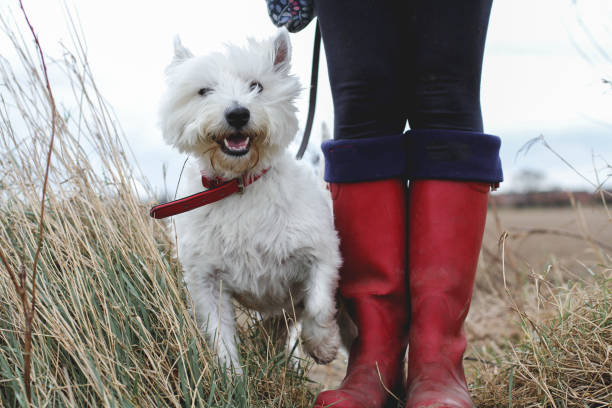 What can I do with the West Highland White Terrier?

Keeping the West Highland White Terrier is not a problem. If he can go for daily walks, he will also be comfortable in a small apartment. Despite his white fur, the little nature boy doesn’t shy away from rain, mud, and cold and always likes to be outside. If you are looking for a well-behaved lap dog, the West Highland White Terrier is not the right choice! The Westie is a dominant power pack in a small format and needs an active person who spends a lot of time with him. He is always up for a joke and loves to learn little tricks.

desire to do so. The breed is less suitable for jogging or cycling. The former hunting dogs prefer to cover the distance more slowly and sniff through the undergrowth. When the weather is bad, you can keep your Westie busy with intelligence toys and hidden object games indoors. Due to his playfulness, he is particularly happy with sports such as flyball or agility. The little dog has not forgotten its original use as a hunting dog. So when he goes for a walk, he always needs the full attention of his humanity so that he doesn’t do anything stupid and gives in to his hunting instinct.

The snow-white, long coat of the West Highland White Terrier quickly suggests that the grooming effort is quite high. In fact, you don’t have to spend much more time caring for them than other long-haired breeds. Bathing is only done in absolutely exceptional cases when there is no other option. Normally, brushing Westie’s coat regularly is sufficient to remove excess undercoat. Since the breed does not go through a natural shedding process, the dead coat needs regular trimming. Depending on the quality of the coat, you should take your dog to the hairdresser every 6 to 11 weeks and have the coat professionally trimmed.