The elegant Doberman is best known for his excellent watchdog skills and courageous nature. For this reason, it is by no means a beginner’s dog and should be trained consistently from the start. Find out everything about the history, character, attitude, and care of the Dobermann in the profile.

Contents hide
1 History of the Doberman
2 Essence and Character
3 How Do I Keep a Doberman?
3.1 Considerations before purchasing
3.2 Puppy development and education
3.3 Activities with the Doberman

History of the Doberman

The history of the Doberman begins in the small town of Apolda in Thuringia. Friedrich Louis Dobermann needed a dog for his personal protection at work. It is not known what profession he pursued. But it was said that he had an unpopular job, such as a tax collector or night watchman. The only thing that is certain is that he also worked as a municipal dog catcher and kept particularly sharp and watchful four-legged friends for breeding with his bitch Schnuppe. The direct ancestors of the breed include Rottweilers, German Shepherds, Great Danes, Pinschers, and Greyhounds. After the breeder’s death, a friend took over his dogs and bred the Doberman to a working and farm dog.

In 1899, some breeders founded the Doberman Pinscher Club Apolda. Since the beginning of the 20th century, the breed has been recognized as an official police dog and has been referred to as a gendarme dog due to its noble demeanor. In both world wars, the breed was primarily used by the military as reporting, mine detection, and medical service dogs.

During World War II, Dobermans were the preferred service dogs in concentration camps. From 1955 the breed was officially recognized by the FCI and placed in FCI Group 2, Section 1.1, the Pinscher. To this day, some breeders abroad still crop the Doberman’s ears and tail to make him appear more dangerous. To stop this practice, the FCI changed the official breed standard accordingly in 2015. From now on, docking dogs will be punished with disqualification from breeding. In addition to its duties as a service dog, the Dobi is increasingly being used as a family dog. 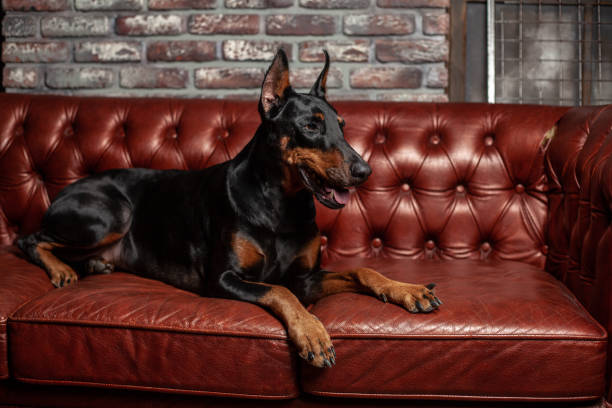 Dobermans are among the most intelligent dog breeds in the world and have a great willingness to learn and good comprehension. Even if the Dobi is no longer bred so aggressively and sharply today, he is always ready to bravely defend his family. He has a low to the medium threshold and is always suspicious of strangers. Because of this, he sometimes has a bad reputation to contend with. In the circle of his human pack, the Doberman is a peaceful cuddly animal and, with the appropriate training, gets along well with children. The loyal and affectionate dog prefers to be with you everywhere and doesn’t like to be alone. He needs a reference person who takes care of him from the beginning and shows him where to go, then he can become a great partner for life.

How Do I Keep a Doberman?

If you want to get a small Doberman puppy, you should not underestimate the work involved in rearing and training it. The intelligent breed is only suitable for people with a strong personality and a lot of dog experience. It’s a great experience to see the little rascal grow up and develop a deep bond with him. But you should be aware that the dog will be part of your life for 10 to 13 years. During this period you should be able to deal with the dog every day and be outside a lot. You should be able to take it with you when you go out as often as possible.

If you are sure that a Dobi is a right dog for you, you need to find a reputable breeder. A breeder who is a member of a registered club and has a lot of experience in breeding Dobermans is best suited. For a purebred and healthy puppy, you should calculate up to 1250€. Even in animal shelters, there is always a dear Doberman in need who is looking for a new loving home.

Puppies with a docked tail and prick ears are forbidden in Germany for animal welfare reasons. Here you will only find dogs with long tails and cute hanging ears. If you find docked puppies from a private breeder, you should report this to the animal welfare authorities immediately. 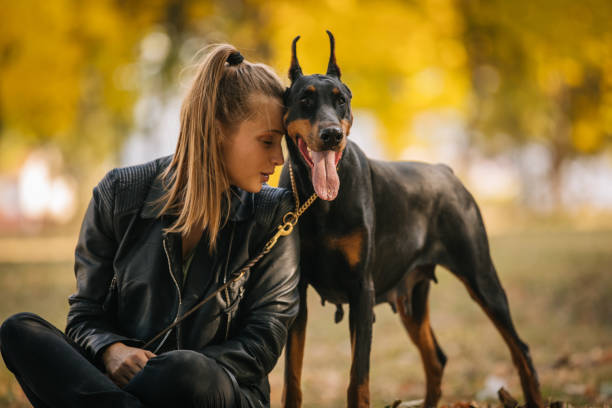 A Dobermann is very willing to learn from an early age and wants to be challenged by its owner. He quickly learns new commands and enjoys training together. With a consistent but loving upbringing as a puppy, your Doberman will quickly become a valuable family member. Especially during puberty, between 7 and 8 months, Dobi puppies like to test their limits and need strong guidance. The pronounced protective instinct also sets in at this point and can be slowed down and adjusted a little with regular practice and a lot of patience.

In order to achieve good socialization, your puppy should have a lot of contact with other dogs and ideally attend a dog school together with you. When going for a walk in the forest, you should make sure from the start that you can get your natural hunting instinct under control. Many Dobermans are passionate sight hunters, some of whom also go hunting with the intention of killing the game. At the age of one year, the Doberman is largely grown and should have enjoyed a good upbringing. Correcting mistakes made in puppyhood can be difficult. In addition, anyone who wants to keep this breed of dog must take out dog liability insurance for their four-legged friend in almost all federal states.

Activities with the Doberman

Since the Dobi is one of the most intelligent dogs in the world, it needs meaningful employment. Due to its agility and strength, it is particularly suitable for police or military service. He also happily serves as a therapy, rescue, and guide dog. If you want to get a Doberman for private use, it should be just as busy as a service dog. A bored Dobi will seek employment for himself, which is often not entirely in the interest of the owner. Nevertheless, you should find a good balance between activity and rest so that your dog is fully utilized.