The horse lives well on hay and oats, but now and then a little treat is allowed on the menu. In addition to root vegetables such as carrots or beetroot and tree fruits such as apples or pears, the four-legged friends also like a piece of pumpkin or a tangerine. 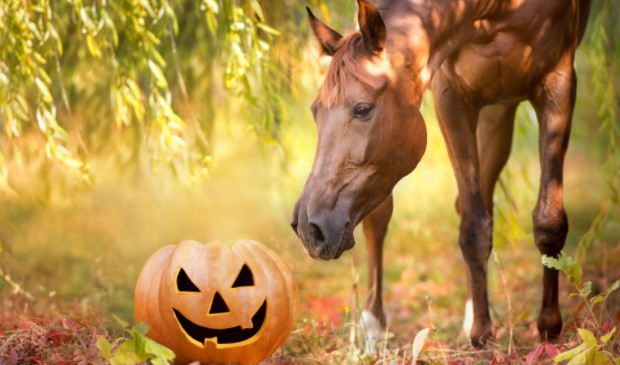 After the harvests were brought in in autumn, there is now a colorful variety of fruit and vegetables in the cellars, farm shops, and shops. Horse owners who enrich their meals with this seasonal offer sooner or later come up with the idea of ​​giving their horse some of it and adding variety to the menu. This presents itself outside of the grazing season, when all the fresh grass is gone, namely a bit sparse. On the other hand, traditional hay and oat feeding combined with mineral feed have got generations of horses through the winter well. Unlike humans, four-legged friends do not need a mixed diet with lots of vegetables and fruit to stay healthy.

But that doesn’t mean that steeds don’t like fruit and vegetables. On the contrary: Most people love crunchy carrots, juicy apples, and other delicacies. And there’s nothing wrong with spoiling your four-legged friend with it – provided you don’t overdo it. Because the horse’s sensitive gastrointestinal tract is designed for a rather monotonous diet and does not tolerate changes well. As the original inhabitants of a barren steppe landscape, the horse mainly ate low-energy, fibrous grasses. If it found tasty herbs, blossoms, seeds, nuts, fruits, or roots, these were eaten as a rare treat, but only in the small amounts that can be found in nature.

If you don’t lose sight of species-appropriate nutrition, you can feed your four-legged friend seasonal treats from time to time. Ripe fruit and vegetables from local farmers that have not been sprayed are best. Anything that is overripe, rotten, or moldy goes on the compost. Nightshade plants such as tomatoes, potatoes, pepperoni, and aubergines are taboo, and cabbage varieties such as cauliflower, broccoli, or kohlrabi also do not belong in the feeding trough.

Root vegetables are better tolerated. It is not for nothing that the carrot is one of the classics in horse feeding. In many stables, the orange vegetable is fed daily during the cold season because it provides the horse with beta-carotene, the precursor to vitamin A, which is present in fresh grass during the growing season. Since carrots contain a relatively high amount of sugar, they are not a staple food, but a treat or reward for the horse. Special caution with feed high in sugar and energy is required for four-legged friends with metabolic disorders such as Cushing’s disease, laminitis, or the equine metabolic syndrome EMS.

Sugar beet pulp, a by-product of the sugar industry, has proven its worth. Soaked long enough, they are easily digestible, low in protein, and rich in raw fiber. Since they also supply a lot of energy, they are particularly suitable for heavy-feeding horses that tend to lose weight over the winter. Randen also likes many horses. Two to three of the red tubers, which contain valuable minerals and trace elements, can be fed raw per day without any problems.

As with humans, opinions on fennel also differ among horses: some love it, others despise it. The Umbelliferae have a calming effect on the gastrointestinal tract and are expectorant in case of coughing and should also only be fed in small amounts. The same applies to the pumpkin, which is enjoying increasing popularity in our latitudes, not least because of Halloween.

Michigan State University in the US has scientifically researched feeding pumpkins to horses and gave it the go-ahead. Its high fiber, beta-carotene, vitamin E, and folic acid content, while being low in sugar, and the fact that most horses like its taste, make raw pumpkin a good snack for horses. No more than one or two slices should be fed a day, the kernels can be eaten. Like humans, horses are not allowed to eat ornamental gourds, they contain the bitter substance cucurbitacin, which is poisonous in large quantities. 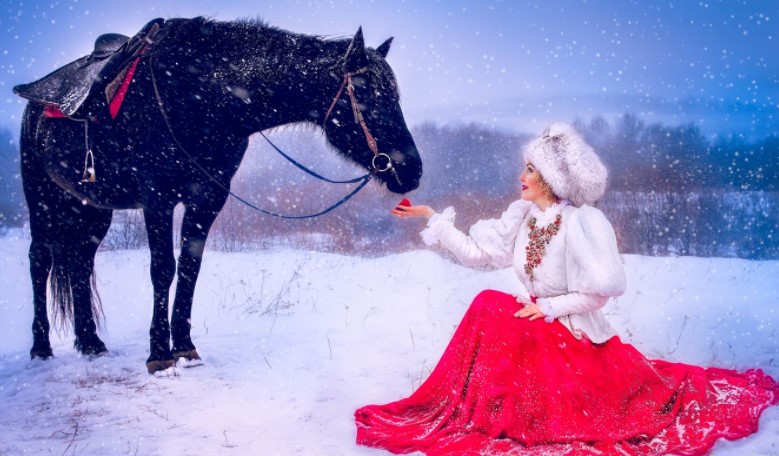 Like so many creatures, horses also love sweets. But you should only enjoy it in moderation. Fruits such as apples, pears, and bananas without their skins may occasionally be on the menu, even if their composition with a lot of fructose and little crude fiber is not ideal for horses. In larger amounts, the high acidity of apples, pears, and other fruits can unbalance the horse’s intestines. Uncontrolled consumption, for example in horses that graze on meadow orchards, can quickly lead to diarrhea and colic.

Stone fruit such as plums and damsons should also not end up in the manger. On the one hand, the stone is a danger that can release toxic hydrocyanic acid or get stuck in the digestive tract. There is also a risk of colic because these fruits ferment strongly. The situation is different with citrus fruits. While they’re not part of the natural diet, there’s nothing wrong with the occasional orange or tangerine, which some horses go crazy for.