Melancholic eyes, oversized ears that hang down to the ground when sniffing, and a long dog body enthroned on strong, short paws make the hearts of dog lovers and crime fiction fans beat faster – the Basset Hound.

The basset hound with the descriptive name “Dog” cannot match the popularity of a Lassie collie, but the companion of the quirky detective Columbo in the crime series of the same name has to move much less physically and mentally.

The Basset Hound is the trademark and face of the Hush Puppies shoe brand. Not a few people give the representatives of the old dog breed this name.

As early as the Middle Ages, monks bred bassets for hunting through dense undergrowth. Whether they got their short legs because, according to Alix M. Freeman, “the French nobles were so out of shape they could only follow a very slow hound with short legs and crippled knees” has not really been proven, but made possible the short legs enable the dog to hunt with its nose very close to the ground. 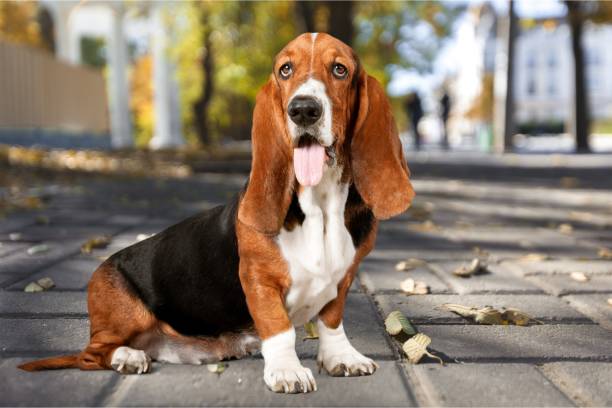 The Basset Hound developed in England to its present form has its ancestors in the family of the French Bassets, the types “d’Artois” and “Artesian Normand” was known in England at least at the time of Shakespeare. However, the actual Basset Hound did not emerge until many years later, after the English Lord Galway received a pair of Bassets Artesian Normand from the French Comte de Tournow in 1866.

A litter from the breeding pair ‘Basset’ and ‘Belle’ then came to Lord Onslow who then further crossed these dogs with imported Bassets. After the imports were finally stopped, after 1874 Basset d’Artois and Basset Artesian Normand then merged into a uniform, purely English type.

Just one year later, the Basset Hound was presented to the public for the first time at the Wolverhampton Dog Show. Then, in 1892, a bloodhound was crossed, which was the very first artificial insemination in a higher mammal.

A year later the Basset Hound Club of England was formed. The basset hound is very similar to the St. Hubert Hound, from which it differs only in the shape of the legs. Like the latter, it has an excellent sense of smell, which is considered to be the best next to that of the bloodhound.

When the basset came to America, it was accepted with great enthusiasm by the hunters there as well. Capable of following cold tracks with ease, he is also excellent at following rabbits, hares, or even wounded pheasants.  Its body shape, coupled with amazing agility, allows it to hunt through even the thickest undergrowth. When taught, he will shoo squirrels, raccoons, and possums up trees.

With an excellent sense of smell, the Basset Hound has excellent prerequisites for hunting small game, primarily directly on the ground. The hunting dog achieves good results, especially when used in a pack. This also applies to searches; here the persevering hunting assistant manages to track down wounded game days later.

Crossing with Bloodhounds further enhances his sense of smell. Like many other dog breeds, the Second World War took a heavy toll on this breed. Only a few representatives survived the bad times and with great breeding efforts, the breed was revived. After the first German litter in 1957, the Basset Hound has been steadily gaining popularity as a family dog ​​in Germany. 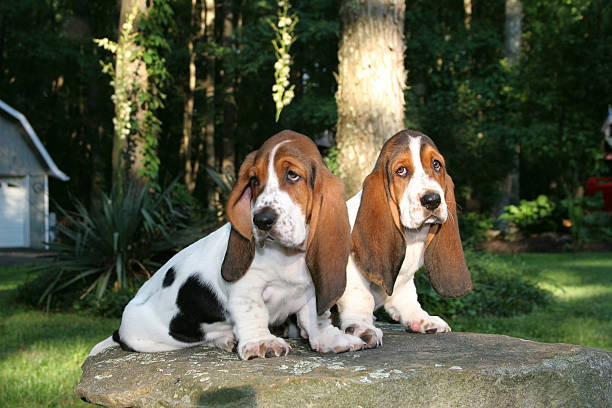 Some hunters report that the Basset Hound can sometimes be lethargic or even stubborn when hunting. They then get stuck on olfactory images, especially the smell of deer is so irresistible for the basset hound that it even crosses motorways or leaves its master alone in the forest.

Its leisurely manner of hunting has a distinct advantage that it scares and alarms game much less. The AKC conducts regular field trials on rabbits for basset hounds throughout the United States, but it has now become very popular at shows as well.

Along with the dachshund and the beagle, the basset hound is one of the few scent hounds that has also become extremely popular as a family dog. It is also often used in advertising, who does not know the world-famous shoe brand “Hush Puppies” with the so gentle and sad-looking basset hound as a symbol. Unfortunately, nowadays the basset hound has become a real “fashion dog” and is marketed accordingly.

In addition, the type has now split into two types. On the one hand, there is the type of basset hound that is hunted. These include the bassets, which still hunt in large packs in England and are used in field trials, as well as the animals kept as domestic dogs in America and elsewhere. They are lighter-boned, have slightly longer legs, and have very few wrinkles or loose skin.