The name “Rico” is representative of an extremely intelligent breed of dog. Bound by injury years ago, border collie Rico has risen to fame thanks to the ingenuity of his owner.

He is a guest on many television shows and is gaining a similar level of notoriety as the border collies “Fly” and “Rex” from the family film A Pig Called Babe. Due to its breed-typical intelligence, the dog learns the names of over 200 plush toy objects and figures. And he is able, on command, to fetch whatever is named to him from the large number of toys gathered in the neighboring room.

The four-legged friend, which has a particularly pronounced herding instinct, is able to separate individual animals from the association of a flock of sheep. He has the predisposition to distinguish and implement directions. Shepherds have been taking advantage of this gift and the way modern Border Collies work for hundreds of years.

The breed is at home in the border areas between Scotland and England (the so-called Border Counties). In close connection with humans, the four-legged helpers are used in the impassable areas to tend sheep and goat herds on the barren, stony and hilly soils there. 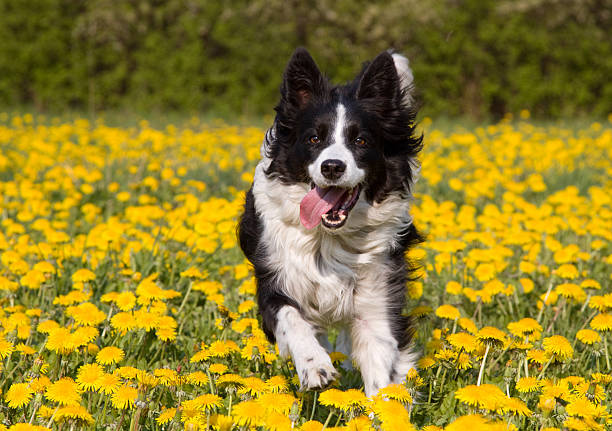 A Border Collie is able to set a herd animal in motion with its penetrating gaze alone. Left to its own devices and without visual contact with the shepherd, the Border Collie works with wild sheep in confusing terrain. This type of farm animal differs significantly from tame German animals and challenges the dog in a special way. The herding dog has to fend off attacking sheep and at the same time, it is forbidden to damage one of the valuable animals.

Restlessness and stress as well as a careless activity are to be avoided – a maximum frustration tolerance is desired in the breeding line. The behavioral processes involved in herding work essentially correspond to hunting behavior. The only thing that must not come to an end here is the tearing or killing of the “wild”. If the dog gets carried away or, in the worst case, attacks the human, this means death in its earlier breeding history.

In this way, a character that is friendly and devoted to people is drastically formed. Dogs with a working method comparable to the Border Collie were already described in the 16th century. At the end of the 19th century, the number of breeds that were recognized as a breed with the FCI standard no. 297 in 1976 increased.

At this time, the Border Collie is spreading in Germany. Breeding characteristics geared to demanding work were in the foreground for a long time, while the Border Collie’s appearance was of secondary importance.

This explains the pronounced variety of external features. Border collies weighing 12 to 25 kilograms can be found, as well as 40 to 60 centimeters at the withers of herding dogs. The same goes for the coat varieties. The coat can be long, moderately long, or stock-haired – with a full topcoat and a very dense and soft undercoat. Brushed regularly, it remains easy to care for and does not become matted. The fur markings are rarely found in such a range.

Classic black and white drawings, red and blue variants with white or the Australian Red are examples of this. Including different shades of coat and light brown markings. Even the color of the eyes is sometimes surprising when one or both eyes are a striking blue.

By aligning the focus of breeding on the usefulness of the dog, the breeds keep the dog physically and mentally healthy. Stubbornness and stubbornness are a must – this is the only way a herding dog can work independently. 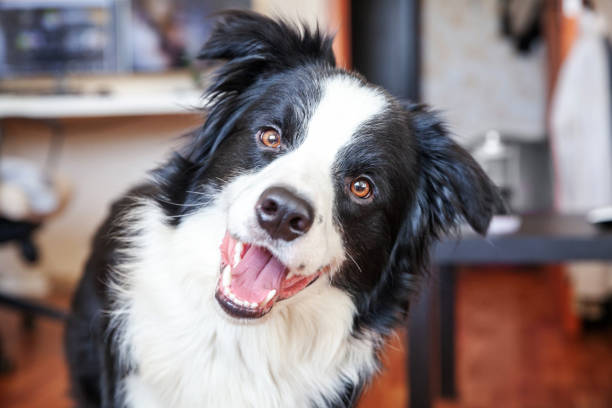 A Border Collie is a workhorse. Calmly and deliberately, he carries out the tasks assigned to him. He does not bark and behaves in the house and in public in a reserved and exemplary manner. Unlike most dog breeds, the Border Collie maintains direct eye contact with its caregiver.

A behavior that can harbor the potential for conflict when encountering dogs of other breeds, but it is a very effective tool for working in the herd. The dog practically moves in the shadow of humans, learns quickly, and always requires consistently consistent leadership in connection with an active field of activity. The blessing and challenge of being able to work with such an intelligent animal can quickly mutate into a curse for an overwhelmed dog owner.

Torn out of their working environment, Border Collies who appear hysterical to tyrannical are unfortunately not isolated cases. Deprived of the task and thus of security, there are definitely irritations in the form of misguided herding behavior. Then the basically exceptionally child-loving and cuddly four-legged friend protects and endangers children, road users, animals, and everything that moves in its environment.

Before the desire to give a Border Collie a home is put into practice, it is advisable to contact breeders and Border Collie owners. A meaningful first impression can only be gained through them and thanks to your own perception on the pitch and at the work of the herding dogs. Owners who decide to have a Border Collie despite a lack of work opportunities in the form of herds of sheep are urgently requested to provide employment!

Regular walks alone are not enough – tasks are needed! Flyball, Discdog, and Agility meet the enthusiasm for work. Border Collies with strong temperaments are an asset as rescue dogs because of their quick perception, they can also be used successfully as explosives and drug detection dogs.