The Bedlington Terrier belongs to the FCI group 3 of terriers and has its origin in Great Britain. It owes its name to its place of origin, which can be found in the coalfields of Northumberland in northern England. His extremely unusual, lamb-like appearance, which is emphasized by the typical hairstyle, earned him the nickname “sheep in wolf’s clothing”.

Characteristics of the Bedlington Terrier

The most important facts about the Bedlington Terrier for a quick overview!

Since the oldest Bedlington Terrier came from Rothbury, the breed was first called Rothbury Terrier at the beginning of the 19th century. According to the breed standard, his shoulder height should be 41 cm, the desired weight is between 8.2 and 10.4 kg.

Coat Texture of the Bedlington Terrier 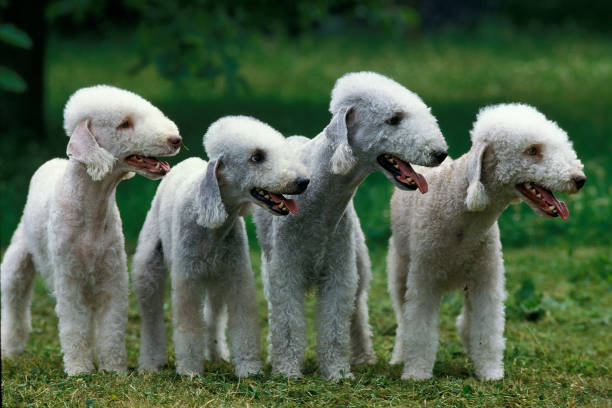 Unlike other terriers, the Bedlington Terrier’s coat is thick but not wiry. It consists of a mixture of hard and soft hair that is quite fluffy and has a strong tendency to frizz. In addition, the Bedlington Terrier has a woolen undercoat. As for coat color, the predominant colors are blue or blue with tan, but at times it may be liver or liver with tan or fawn or fawn with a tan.

The originally rough-haired terrier only got its sheep-like shape towards the end of the 19th century, when it was increasingly bred for exhibition purposes. Regular clipping with scissors is required to maintain the typical Bedlington appearance, he is not trimmed like other terriers.

Since this is a fairly complicated process that requires some skill, you should have the first shearing done by a specialist if possible. Although their coat has the hygienic advantage of not shedding, the Bedlington Terrier still needs to be combed regularly.

A typical feature of this breed is that the color of the eyes corresponds to the color of the coat. Blue specimens, therefore, have dark eyes, while bi-color blue and tan dogs have light eyes, and sand and liver-colored dogs are characterized by hazel eyes.

The Bedlington Terrier has been shown to have the longest breed history of any terrier. He is descended from local wire-haired terriers, most likely crossbred with hounds such as the Otterhound and Whippets. The Dandie Dinmont Terrier, the Bull Terrier, and the Bulldog are also believed to be among his ancestors, possibly even poodle-like dogs.

A proven ancestor of the breed, the male “Peachem” is mentioned in both the Bedlington and the Dandie Dinmont Terrier. Additionally, the Bedlington Terrier’s long, teardrop-shaped ear is a clue to possible sighthound ancestry, as is its arched loin and the blue and liver coloring of its coat.

After the already mentioned oldest Bedlington, the Rothbury Terrier, was still characterized by a heavy body and shorter legs, a larger and faster breed emerged, which also had a more elegant appearance. However, the main qualities of endurance and courage were retained, so in his homeland, he became the favorite for hunting unwanted small animals such as rats and badgers.

He also caught rabbits, swam after otters, whose valuable fur gave the poor miners an additional income, and also provided foxes. When the Bedlington Terrier Club was formed in Britain in 1875, it was widely known as a brave and hardy dog ​​who would fight to the death in an emergency. So it was not surprising that the Bedlington Terrier became the preferred dog of poachers due to its great skill. In addition to his work as a poacher helper, many gypsies also took him to dog fights, and he was always good for a bet. For this reason, it is still known today in large parts of England as a gypsy dog. The special courage of this breed was shown by the dog “Ainsley’s Young Piper”, which once saved its owner’s small child from being attacked by an angry sow.

The same dog is said to have pulled a badger out of its hole at the age of 14, toothless and almost completely blind, where the other terriers had failed. Unfortunately, as his type improved markedly over the years and was gradually refined into an excellent companion dog, his ever-increasing popularity as a women’s companion dog diminished his popular and keen working abilities. 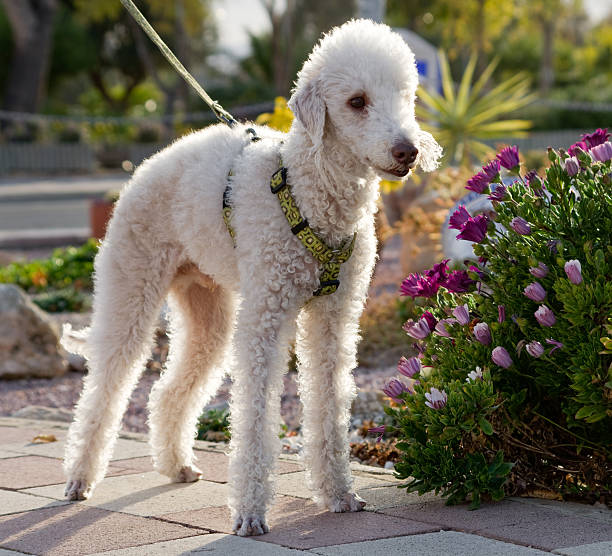 In addition to starting his career as a show dog towards the end of the 19th century, his lovable nature and courage made him an increasingly valued house dog, so he was no longer bred solely for his hunting skills.

The AKC’s Complete Dog Book even admitted, “Once his jealousy is aroused, he fights for a place in his master’s love.” Despite its sheep-like appearance, the Bedlington Terrier has remained a typical terrier. He’s tough, resilient, and when it comes down to it, a tough, uncompromising fighter too. As a dog originally bred for hunting, it is still keen on predators, i.e. it has the instinct to kill the hunted game.

It’s not for nothing that his jaws are so well developed! Also, like his ancestors, he still occasionally tends to seek a fight with another dog. Since he is very eager to learn and intelligent, he can be trained in a variety of ways.

His attentiveness and typical terrier courage make him an ideal guard dog, but he should never appear fearful. Since he is generally also very affectionate and loving, he is an excellent and loyal housemate. Although bred today primarily as an elegant show beauty, the Bedlington Terrier’s nature as a hunting dog requires that he be given plenty of exercise and exercise.