The Cairn Terrier is one of the oldest breeds of Scottish Terriers, specialized in catching foxes and rodents since ancient times. It is an energetic, upbeat companion dog with a stiff, puffy coat and pointed erect ears. 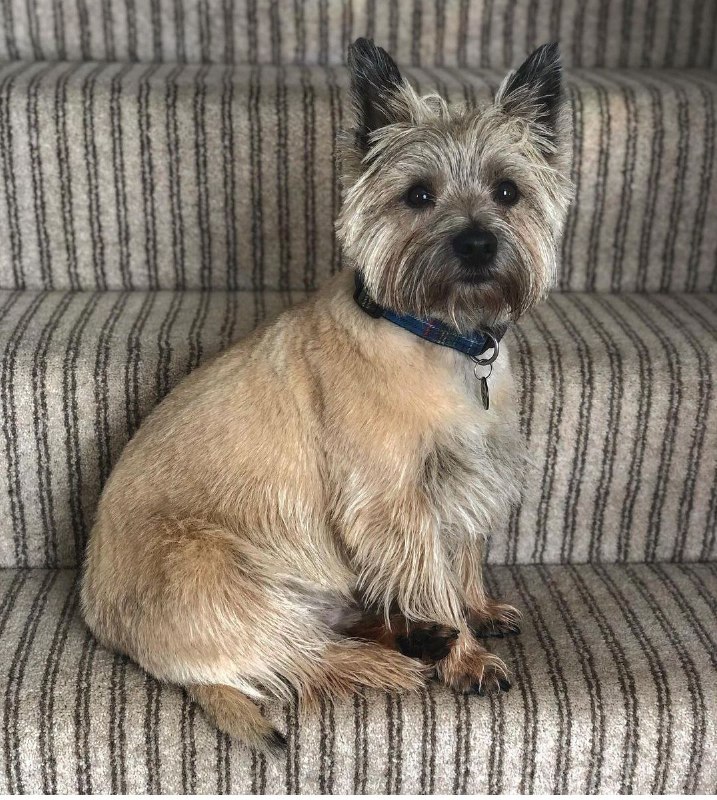 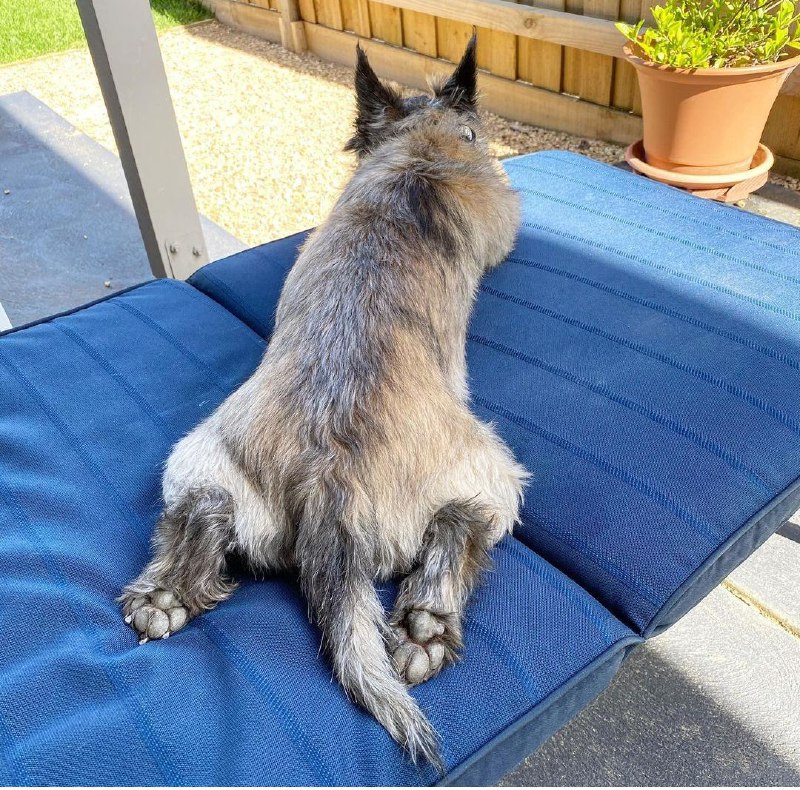 History of the Cairn Terrier Breed 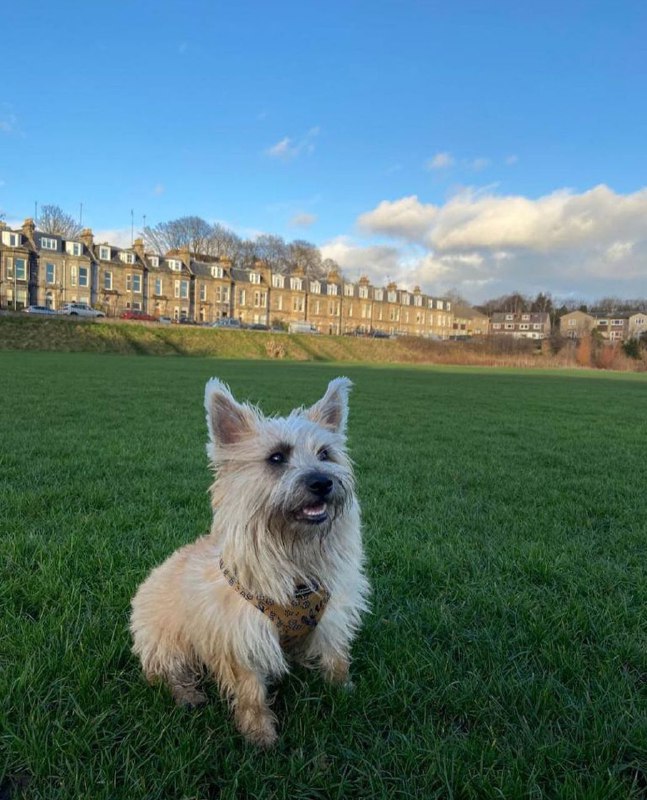 Cairn Terriers are often called the great-grandfathers of all Scottish terriers since mentions of hunting foxes and badgers with them have been found since the 16th century.
Despite the fact that the first professional breeder of Cairn Terriers is considered the Scotsman Captain McLeod, who presented the most viable and working line of the breed, breeding of dogs went on spontaneously for a long time. In particular, every British farmer considered it his duty to carry out a series of breeding experiments, which, in his opinion, could make Cairn terriers more efficient helpers.
Cairn Terriers became full-fledged exhibitors, although up until 1923 they were still bred with West Highland White Terriers to produce glamorous snow-white dogs. 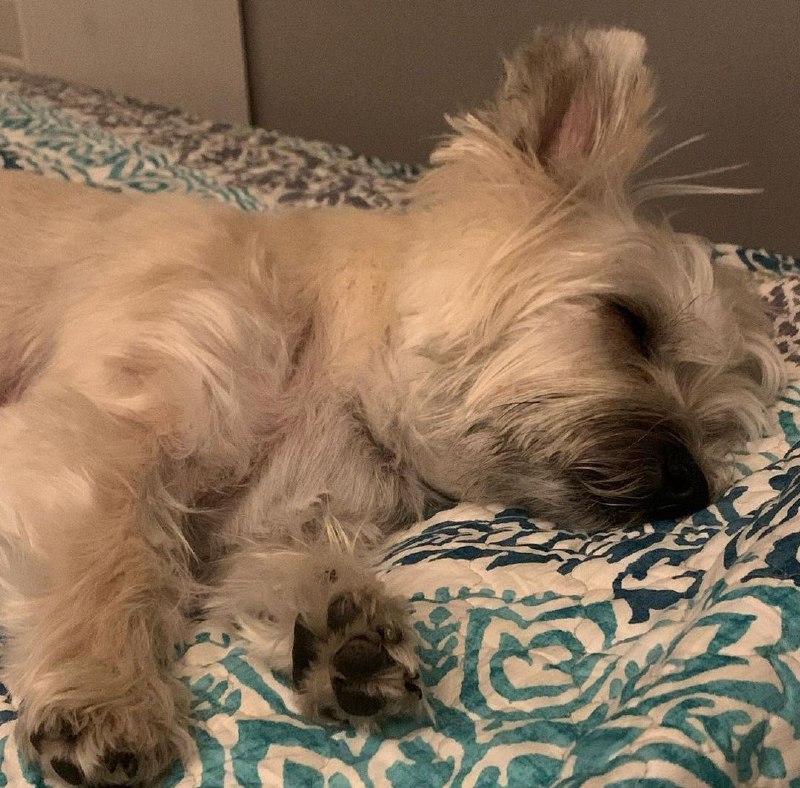 The Cairn Terrier is a combination of amusing appearance and lively temperament. Playful, dressed in shaggy “fur coats” look like they just jumped off the shelf of a toy store. Add to this a modest weight (only 6-9 kg), a typical low stance for terriers, and an overall compact build – and you have an exemplary representative of the breed, assertive, restless, and terribly curious. 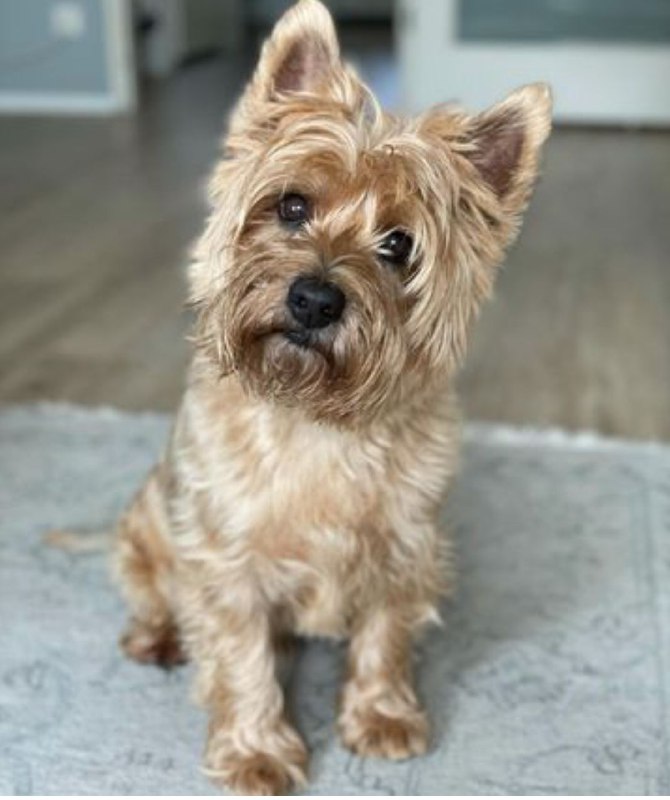 Cairn Terriers are the most typical representatives of the terrier clan, so when bringing them into the house, get ready for endless curiosity, easy courage, instant reaction, and pranks. In addition, it is an extremely contact breed that loves to demonstrate its intellectual and athletic achievements to humans. No matter what tricks and tricks he puts on, he has one ultimate goal – to awaken the owner’s interest in the results of his “works”. Yes, often the shaggy “super dog” goes too far in an effort to amaze the owner with his own ingenuity and restlessness, but it makes no sense to blame him.

The Cairn Terrier is an owner and a creepy curmudgeon who does not recognize the concept of “common property”. He will happily play catch-up with children, willingly chase the ball and bring it, but to any encroachment on personal things (toy, bone) he will answer with a convincing “Woof!” or a warning grunt. At the same time, in other everyday situations, the breed demonstrates quite peaceful behavior. The exception is a threat to the life of the owner, coming from another dog. In such a case, it is incredibly difficult to keep him, but it is vital to do it – in the heat of excitement, the shaggy “Scotsman” crosses all boundaries and ceases to soberly assess his own strength.

Almost all modern Cairn Terriers are “tied up” with hunting qualifications and happily live in city apartments, but do not hope that they have forever disintegrated with pursuit instincts. Plowing a newly planted flower bed in search of a mole that once visited it and bringing a stray cat to a heart attack is a sacred cause for the Cairn Terrier. It is not very easy to reconcile a dog with other pets. This comrade in any four-legged creature sees a direct competitor as possible to neutralize. No, he is absolutely not bloodthirsty, therefore, “to survive” on his side of the opponent will be other methods – sonorous barking, light biting, and pursuit. 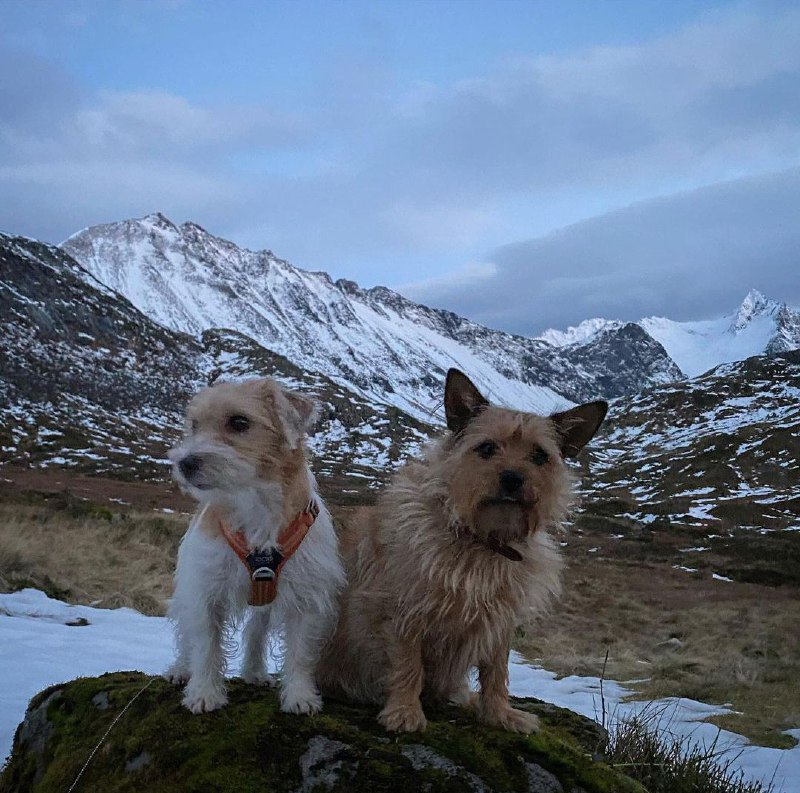 The Cairn Terrier is an intelligent and curious breed, but only until you yell at your pet. Impulsive “Scots” perceive any pressure as an infringement of personal rights, to which they react violently. Moreover, the offending core shows real miracles of stubbornness and disobedience, and it becomes impossible to explain elementary truths to him.

Another characteristic feature of the breed is the duality of behavior. Each individual expresses this quality in different ways. Someone, in the absence of the owners, is lying on sofas and ottomans but hears the sound of a key turning in the doorway, immediately transforms into an exemplary pet, peacefully dozing at the doorstep. Someone slowly harasses the cat, and then, when the owner appears, pretends to see the meowing creature for the first time.

Cynologists assure that it is not very easy to turn a Cairn Terrier into a well-mannered “city dweller”, but it is real. The main thing is to look for individual approaches and not get hung up on one technique. Assert your own leadership persistently, but without rudeness, restrain emotions, and do not yell at the ward – this will make it easier for the dog to adapt to your requirements. By the way, at the initial training of the breed, experts recommend not to use the command “No!”, Replacing it with the word “You can!”. It is easier for a young Cairn Terrier to accept the approval of his own actions than rude prohibitions. In addition, it teaches the animal to more often look to the owner in order to obtain permission for a specific act.

Dog behavior can be regulated not only by voice commands but also by gestures. Cairn Terriers understand them perfectly and react instantly. Moreover, they themselves skillfully express intentions with postures and tail movements. It is easy to guess that he is ready to play and is about to jerk off the spot – the animal takes a “low start”, tries to establish eye contact with the owner, and vigorously wags its tail. 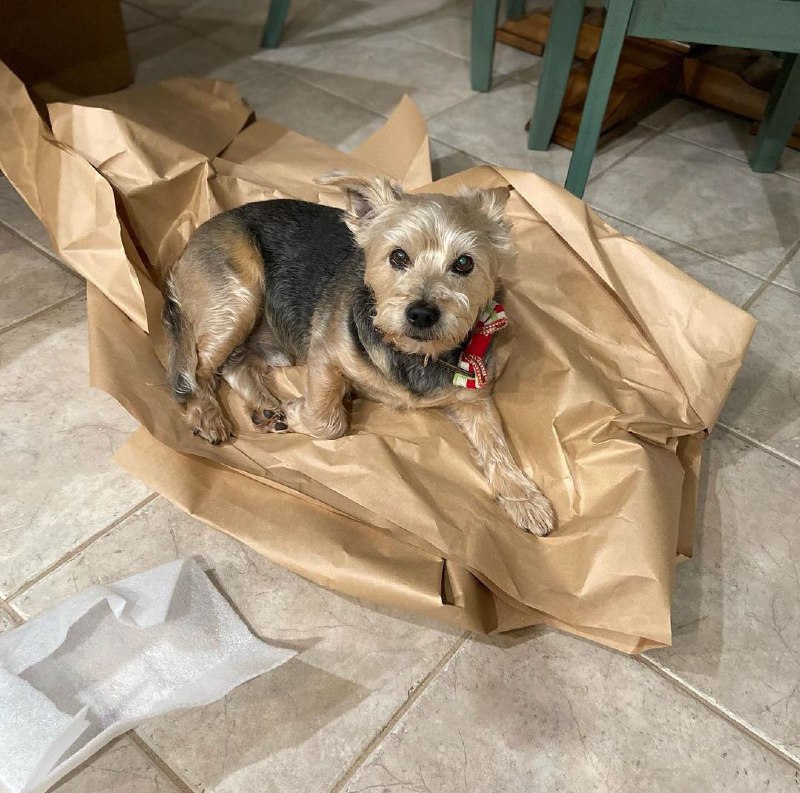 The Cairn Terrier should have an isolated corner in the apartment (bed, house) where he could rest and keep his own “treasures”. Be sure to buy several toys for the animal: cores grow up quickly, they need educational fun with objects. And during the absence of the owners, the pet will have something to do with itself. However, do not overwhelm your dog with gifts either. This breed is very selective and often remains faithful to one ball, gently ignoring other things. By the way, about the balls: they must be soft and relatively large so that the Cairn Terrier cannot swallow them.

Owners living in a private house with a garden or a backyard will have to be extremely prudent, letting the dog “breathe”. It is not a problem for a Cairn Terrier to dig under the fence and run away in an unknown direction. As for the toilet, the tiny cores quickly get used to using the newspaper for “wet deals”, and then relatively easily retrained to do the same on the street. 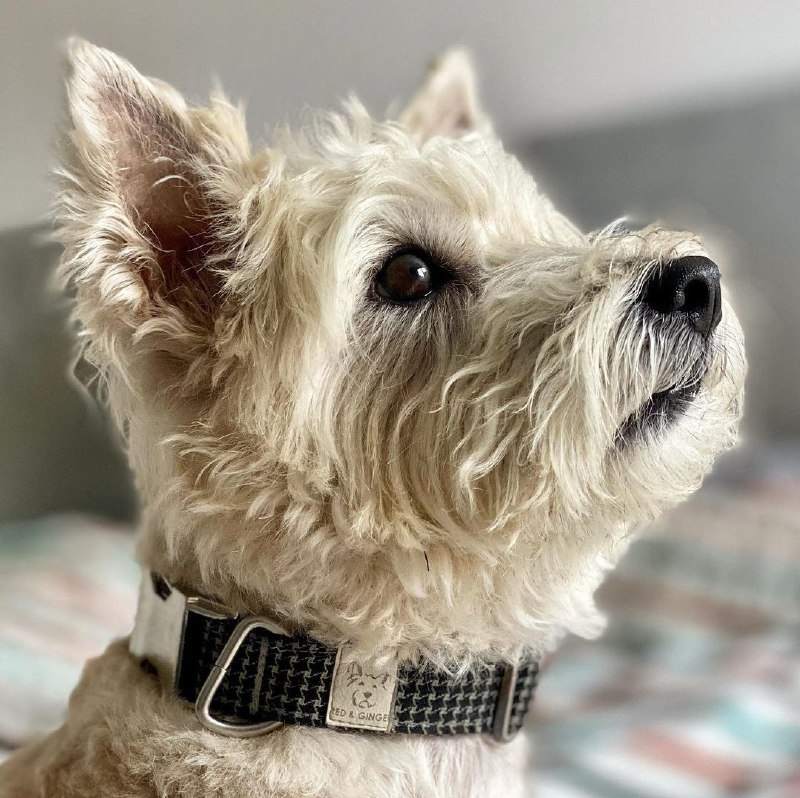 In reality, pet hair requires systematic care. Firstly, because the cores do not shed, which means that the dog needs to be trimmed, removing dead hair and stimulating new growth. Usually, individuals that do not take part in exhibitions are trimmed 3-4 times a year.

Secondly, the undercoat of the breed is prone to the formation of tangles, so if you do not plan to grow a “felt boot” out of a four-legged friend, it must be brushed once or twice a week, paying special attention to the armpit area. An important point is a haircut. In fact, it is contraindicated for Cairn Terriers, since it changes the structure of the coat, softens and things it. However, sometimes you have to use scissors to make the dog’s silhouette more prominent. Usually, they cut the hairs in the lower abdomen and form the contour of the paws, simultaneously removing the hair between the toes and under the tail. Tidying up the rest of the body, including the ears, which are usually abundantly overgrown, will have to be pinched.

Do not overuse water treatments. Western breeders are of the opinion that frequent bathing is harmful to the breed, and recommend washing Cairn Terriers only in the most urgent situations. For example, when an animal fell out in the mud or fell. In other cases, “bath days” are unnecessary, since the coat does not give a specific smell, provided that the dog is systematically trimmed.

It is imperative to observe the hygiene of the genitals. This is especially true for bitches, which during estrus are advised by breeders to rinse the loop and the area around it with warm water, as well as treat with neutralizing sprays that help remove the characteristic odor of secretions. In addition, the soft fur around the genitals rolls off more often than on the rest of the body, so learn to carefully trim the mats with scissors.

Brushing your teeth is a necessary procedure in the life of a Cairn Terrier. Ideally, the pet’s oral cavity should be treated three times a week, but in case of an acute shortage of time, the number of cleanings can be reduced to two. Find the right brush and paste to suit your pet’s taste. Excellent prevention of tartar in dogs is considered to be the use of natural juices, such as lemon or tomato. They can soak a napkin and clean the animal’s oral cavity, carefully rubbing the juice into the tooth enamel. And do not forget, from 4 to 6 months old Cairn Terriers change their milk teeth, so for this period, it is better for four-legged mischievous people to purchase a toy that will help distract and massage the gums.

Check your Cairn Terrier eyes daily to remove any damp lumps and debris. Their ears are cleaned once a week with a damp cloth or rag. 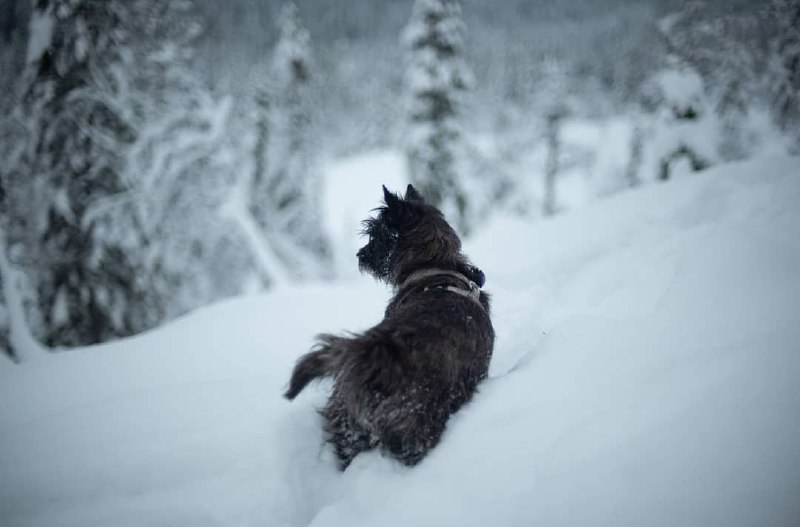 An adult Cairn Terrier is not a bad runner, but usually a walk two times a day is enough for him to emotionally and physically discharge. At the same time, he loves outdoor games and sports. So, taking your pet out into the street, give him the opportunity to retire to the maximum – make him run after the ball, involve him in catch-up games, and search for objects. 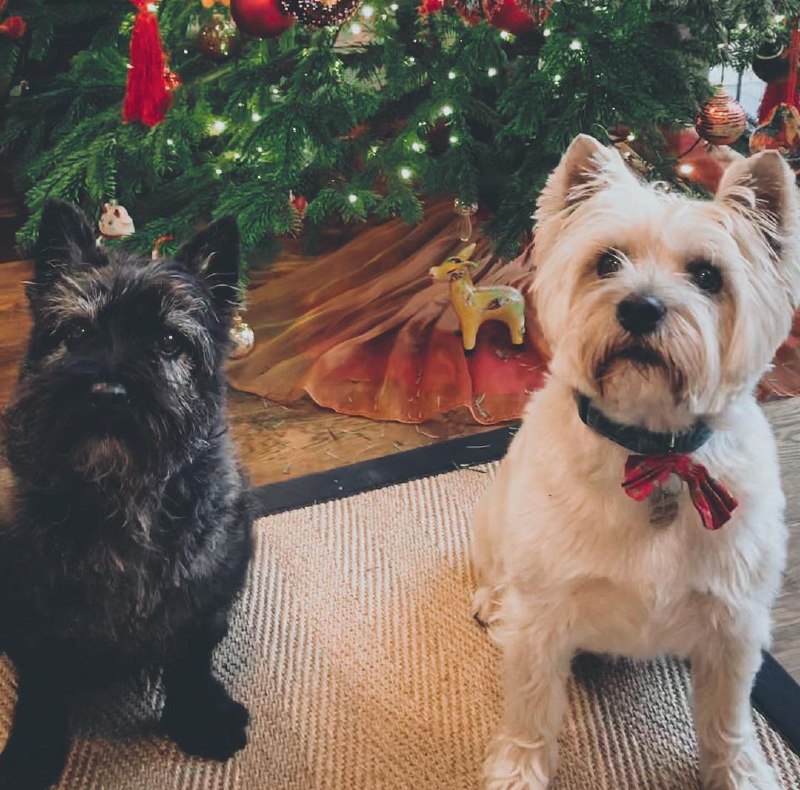 The average Cairn Terrier gives the impression of an eternally hungry creature in a permanent search for food. So if you succumb to the constant begging glances of your pet, you risk growing a fat one, which will then have to be treated by a nutritionist. At four months, a Cairn Terrier puppy is completely ready to switch to three meals a day, and at six, the number of feeds can be reduced to two. Don’t worry, the dog won’t die of hunger. In any case, if the baby has worked up a brutal appetite, he can be encouraged with a small snack.

If things are exactly the opposite, and the Cairn Terrier does not finish eating a portion or does not touch lunch because it does not meet his expectations, it is useful for him to “unload” and skip one meal. As for harmful products, for them, it is pork, fatty lamb, sweets, and smoked meats, bones, and veins. Sometimes the doggie can be treated to a regular sandwich with butter or cheese, or cottage cheese – such “human” food will not bring harm. In addition, from an early age, the Cairn Terrier must be taught to eat fruits, berries, and vegetables. 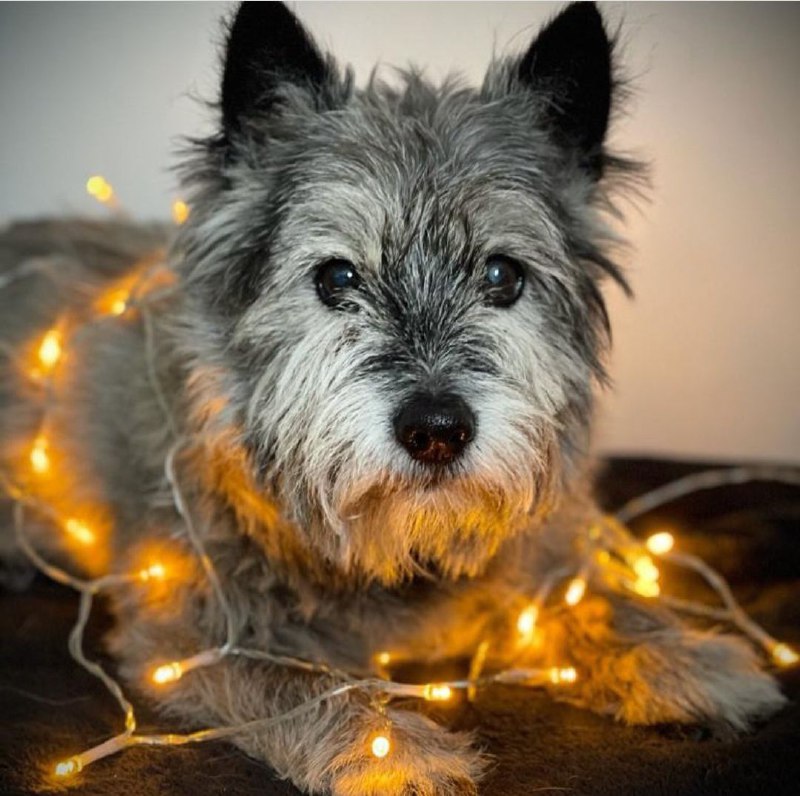 The ancestors of the Cairn Terriers, despite their more than modest build, could boast of iron health and tremendous endurance. Their descendants are also not frail creatures, but the breed is more susceptible to hereditary ailments. In particular, like all members of the terrier clan, they are often diagnosed with Perthes disease, the course of which is accompanied by lameness and is caused by genetics.

Poor blood clotting (von Willebrand disease) is also a genetic disease that is inherited from sires to offspring. In addition, like any small breed dog, Cairn Terriers suffer from the dislocated patella. An unpleasant phenomenon is associated with the size of the animal and does not depend on the quality of pet care. Of the specific diseases, allergies, obesity, and cataracts are most often noted. 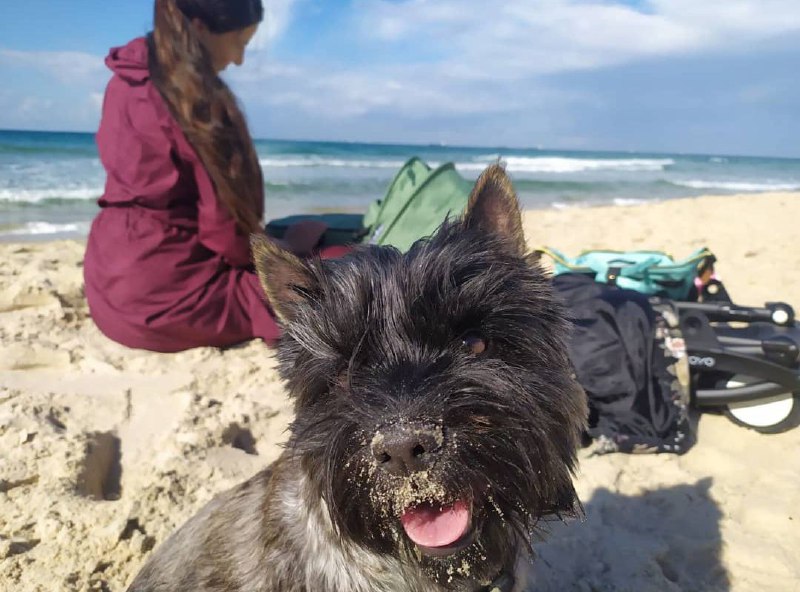