The Chat Terrier is a cross between a purebred Rat Terrier and Chihuahua. These dogs have incorporated the best qualities of the parent breeds. They are very hardy, active, inquisitive, funny, and playful. Energetic owners often start them as companion dogs. The owners’ reviews of Chat Terrier are very positive. Dogs constantly strive to please the owner and be close to him. They are very loyal. 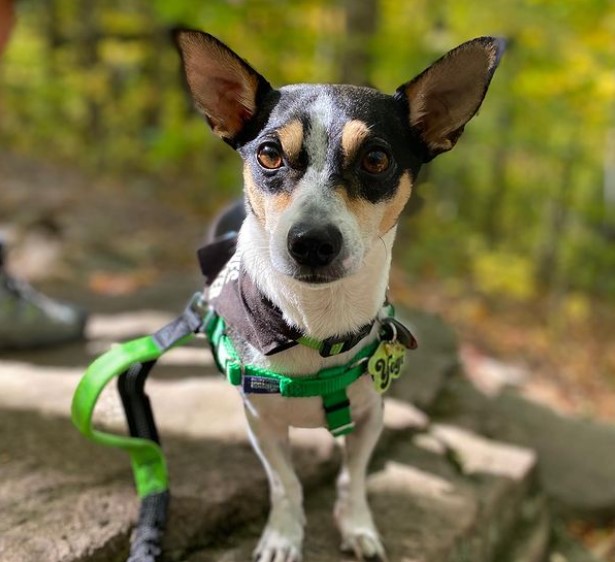 The Chat Terrier is a popular designer breed due to the high popularity of both parent breeds. Despite the puppy’s popularity, detailed reports on their breeding programs and history are lacking. This is most likely due to the recent hybridization of both parental breeds and the amount of variation that may be present in the offspring of this cross. Owners who want to understand the history and potential traits of their dogs can check out the stories of both parents.

The Rat Terrier is not a very ancient breed, but it is very useful, which has provided great help to people. As a matter of fact, the dogs that caught rats were known to people for a long time, as evidenced by the find on the ship “Mary Rose” raised from the bottom of the English Channel – the remains of a small dog. The ship sank in 1545, and a dog named Hatch served as the rat catcher on this flagship of Henry VIII’s fleet.

But, Hatch has nothing to do with the modern breed. We can say that the modern breed was formed in America when the colonists took with them small, but very effective and versatile dogs. Fast, smart, they perfectly hunted rats and small game, and could also act as a live signal.

Subsequently, over the course of many decades, people in every possible way developed the ability of dogs to fight rats. In modern times, the Rat Terrier is not used for catching rats, however, it has found application in other areas. In particular, this is work in the police to detect weapons and drugs at customs, since the small size allows the dog to get into hard-to-reach places.

For similar purposes, they are often used in American prisons. Another modern application is animal therapy as part of various rehabilitation programs. By the way, from the hairless mutation of the Rat Terrier, the Hairless American Terrier arose.

The history of Chihuahua is not fully understood. The dog is named after the Mexican state of Chihuahua, where it was discovered around 1850. Some experts believe the dog was bred by the Aztecs or Incas. Others say the breed can be traced back to Spanish dogs as far back as the 1500s. The use of Chihuahuas in the past is also undefined. Some believe that Chihuahuas may have been eaten by Central American Indians, while others believe that dogs were of great religious importance. The first Chihuahuas are believed to have arrived in the United States of America in the early 19th century. The acquaintance of the population with the Chihuahua happened in an unusual way. Opera singer Adelina Patti became acquainted with the breed in 1890 when she was presented with a Chihuahua hid in a bouquet from the President of Mexico. In the 1940s, conductor Chavier Cugat made frequent public appearances with a Chihuahua under his arm. Recently, recognition and popularity of the breed have increased thanks to the energetic Chihuahua from Taco Bell commercials. 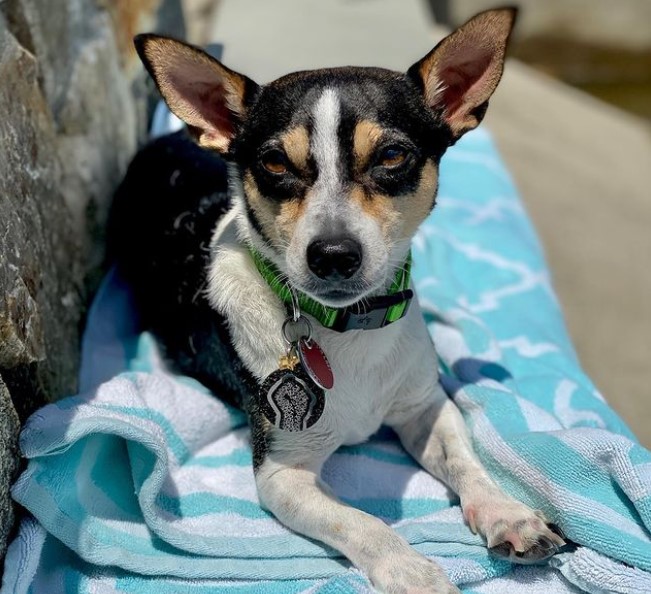 A cross between these breeds has the characteristics of both ancestors. But each separately bred puppy may differ in the brightness of the expressed features from one of its parents. However, it is most often a small dog weighing 10 to 15 pounds and measuring 10 to 12 inches in height. The Chat Terrier can have pointed or folded ears, and its coat can be short or long depending on whether its Chihuahua parent was short-haired or long-haired. Common colors are cream, black, brown, white, and chocolate. The Chat Terrier usually has thin and long legs and a curled tail. 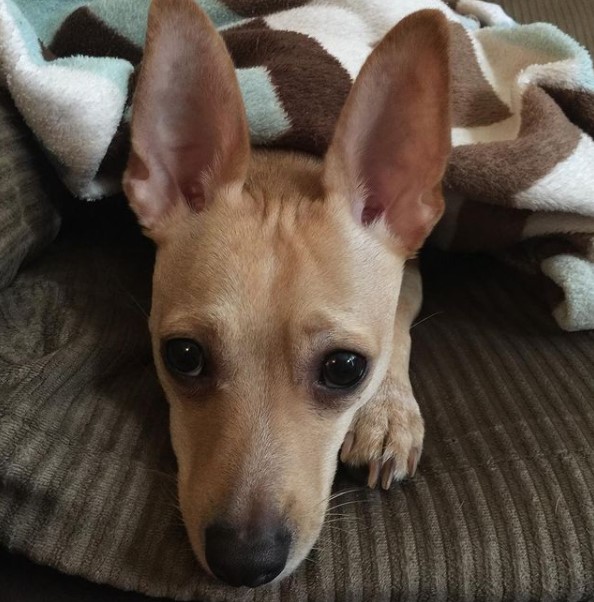 The temperament of these dogs may differ from each puppy, but there are traits that are inherent in almost all. As a rule, this is a very lively dog, with a cheerful, slightly eccentric character. It can be an excellent companion for almost any family, regardless of the number of its members. This breed treats children well, loves to spend time with them in active games and other entertainments. Differs in great devotion to its owner and family, and can adapt to a variety of living conditions, including due to its small size. The Chat Terrier is a very quick-witted dog that understands commands well and loves to learn.

However, his active nature and a large amount of energy must be directed in the right direction, and the training process must be built in such a way that the dog constantly feels interested in him. Accordingly, monotony is best avoided. Also, a large amount of energy requires spending at least an hour a day outside, while allowing the dog to reach its potential. 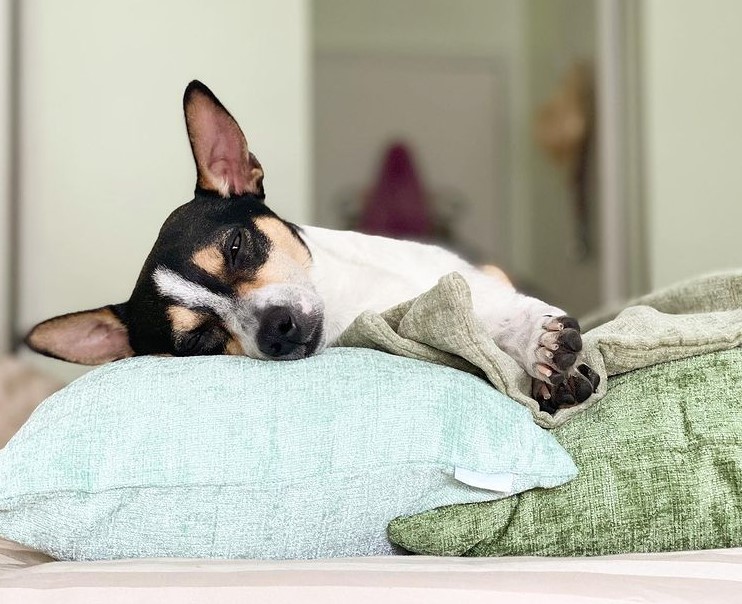 The Chat Terrier is an easy-to-maintain dog that requires minimal grooming. These are dogs with moderate shedding and weekly brushing will help remove loose or dead hair. Bathe your pet every 7-10 days or less. It is important to trim your nails every 3-4 weeks. Ears are cleared of excess sulfur as it accumulates. It is important to monitor the condition of the dog’s teeth. 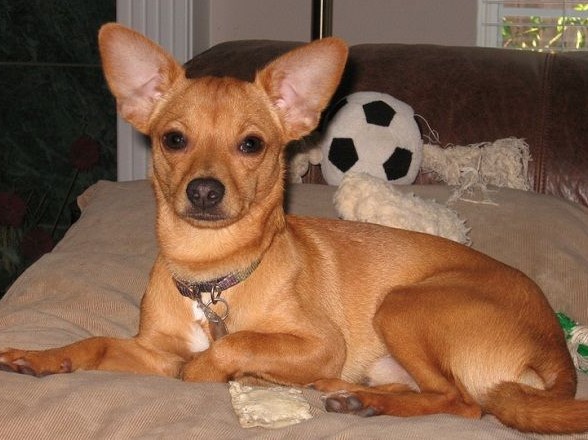 The Chat Terrier is a generally healthy dog, but there are health problems that can be inherited from their parents, such as patellar dislocation, hypoglycemia, heart problems, malocclusion, tracheal collapse, hydrocephalus, open fontanelle, tremors, allergies, and demodectic mange. Ask the breeder to show you the parents’ documents and find out in detail about their diseases. This will give you a better chance of acquiring a healthy puppy. 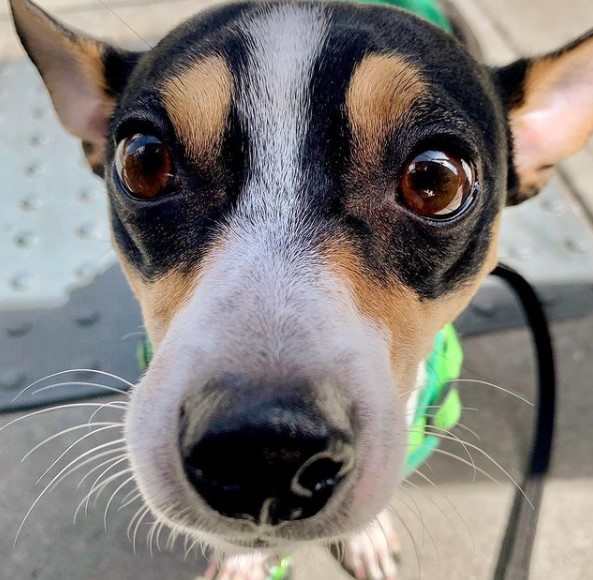 Chat Terrier is a wonderful companion for adults and children. The hassle-free nature and unpretentious care make the breed an attractive pet. This is a cheerful, attentive, and affectionate doggie who is always full of enthusiasm. Alert, courageous and obedient, Chat Terrier strives to be the center of attention in the family. The pet sincerely adores the owner and is strongly attached to all household members! He willingly performs the duties of a watchman, meeting strangers with a little restraint. However, he immediately shows friendliness if he sees that the owner is happy to receive a guest. For Chat Terrier, aggression and shyness are usually not characteristic.