The Chug is a cross between a Pug and a Chihuahua – a wonderful designer dog that combines Pug and Chihuahua traits such as playfulness, loyalty, and affection. This is a dog with a stable psyche, not prone to sudden mood swings, nervousness, or aggression. At the same time, the animal quickly adjusts to the rhythm of the owner’s life and accepts his children. The main thing is to pay due attention to the pet. After all, representatives of this designer breed do not leave people for a second and need their affection. 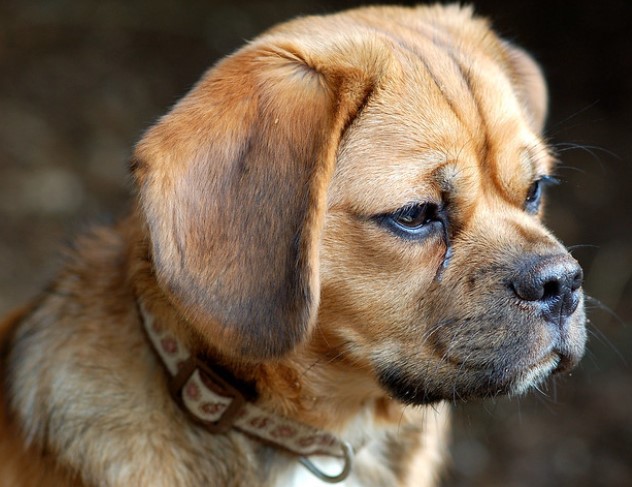 The process of breeding dogs of parental breeds separately began a long time ago. Crossbreeding of Pugs and Chihuahuas is a relatively recent event that has produced many interesting puppies with a special appearance and docile nature. Chagi was most likely bred as a cross in the 2000s. The history of the breed is uncertain. Unlike other crossbreeds, Chugs are recognized by the American Hybrid Dog Club, the Designer Breed Register, the Designer Kennel Club, the American Dog Register, and the International Dog Designer Register.

The exact details of how, why, who, and when Chug was first bred are unknown. But we can study the history of the parent breeds to find out more about the pet’s pedigree.

Pugs are striking representatives of the Asian type. Most scientists agree that their ancestors, similar to the Pekingese, were bred in China more than 3 thousand years ago. Dogs were a symbol of wealth: they lived in the homes of nobles and even had their own servants and guards. With the development of trade relations with the Old World, Pugs came to France (1553) and quickly spread throughout Europe. The breed gained particular popularity in Britain and the Netherlands. According to a well-known legend, the Pug saved the life of the ruler of Holland, William III of Orange, by waking the owner at the time of the enemy’s attack during the war for independence from Spain. For which he won the status of the official dog of the House of Orange.  In 1864, Pug puppies were presented to Queen Victoria. It is she who is credited with the main merit in the development of the breed. In 1884 the first Pug Lovers’ Club was organized. In 1887 the first breed standard came out. It is noteworthy that earlier Pugs were only in one color – fawn. At the same time, they were distinguished by their tallness and elongated muzzle. However, during the Second Opium War, soldiers of the French and English armies brought black Pugs to the west, and the appearance of the dogs changed.

The Chihuahua breed of dogs is considered aboriginal – bred in the wild without human intervention.
According to one of the versions, her ancestors are the ancient dogs of Techichi, tamed by the Indian peoples who lived in the territory of modern Mexico. Dogs were used in sacrificial rituals as guides of the dead to the afterlife. However, with the arrival of the Spanish conquistadors, the culture of the Indian tribes was exterminated, and the remaining dogs eventually migrated to America. According to another version, Chihuahuas appeared as a result of crossing Techichi and Chinese Crested, who lived on Spanish ships as rat catchers. However, a genetic examination carried out in 2013 completely refuted it. DNA samples taken from Chihuahuas contain a haplotype common to dogs from pre-Columbian times. Whereas the connection with European and Asian breeds was not confirmed. Today, Chihuahuas are named after the Mexican state of Chihuahua after the places where they were first discovered. The first breed standard came out in 1923. International classification FCI in 1954. 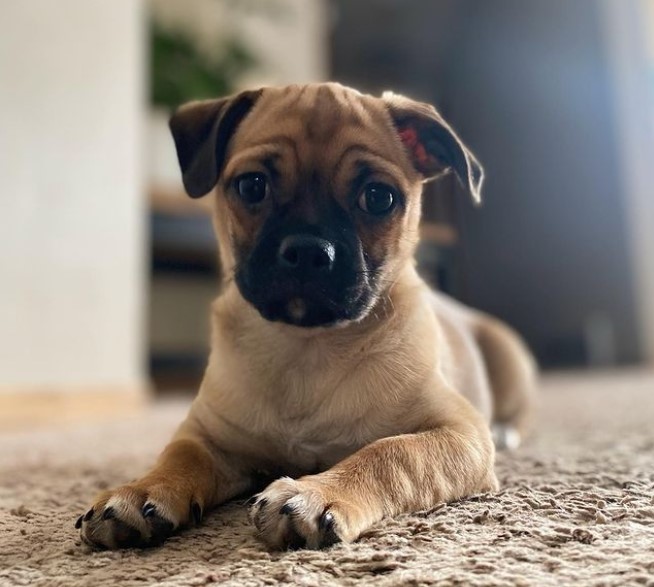 A cross between these breeds has the traits of both of their ancestors. But each separately bred puppy may differ in the brightness of the expressed features from its offspring. In one case, the animal gets most of the traits from the Pug, and in others from the Chihuahua. The Chug is usually larger than the Chihuahua but smaller than the Pug. They have a smooth and short coat that can be long if there are long-haired Chihuahuas in the dog family. Colors can be varied, including spotted and brindle.

They have very cute and expressive faces, with almond-shaped eyes and wrinkles. Their ears can be flexible, like a Pug, or folded, like a Chihuahua. Chugs are small dogs that can weigh up to 9 kg (20 lbs) and are usually 15 to 30 cm (6-12 inches) tall. 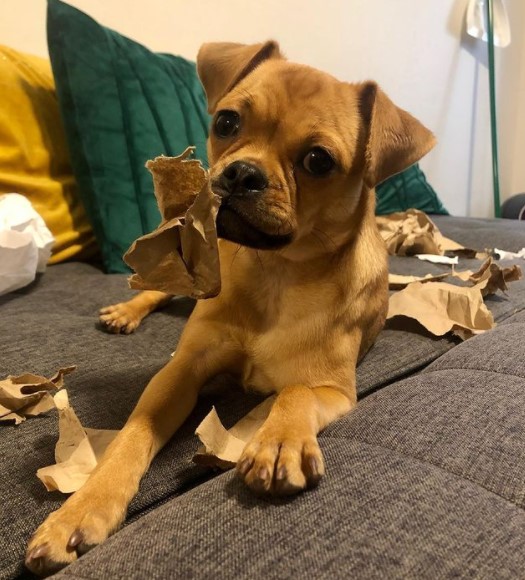 The character of Chugs varies greatly, of course, depending on their parents (in particular, mother), their socialization, and genetics. Usually, this dog is temperamental, hardy, and agile, able to run for a long time in the garden or apartment, doing incredible tricks. The dog is loyal to the owner, periodically jealous, but not spiteful. At the same time, the dog is quite amenable to training, despite its proud disposition. Chug learns teams with ease if you find an approach on an equal footing.  Cowardly or hysterical Chugs are rare. Small dogs are compared to brave warriors of small stature. A true Chug is handsome, proud, despite his diminutive stature. The dog is curious and observant. 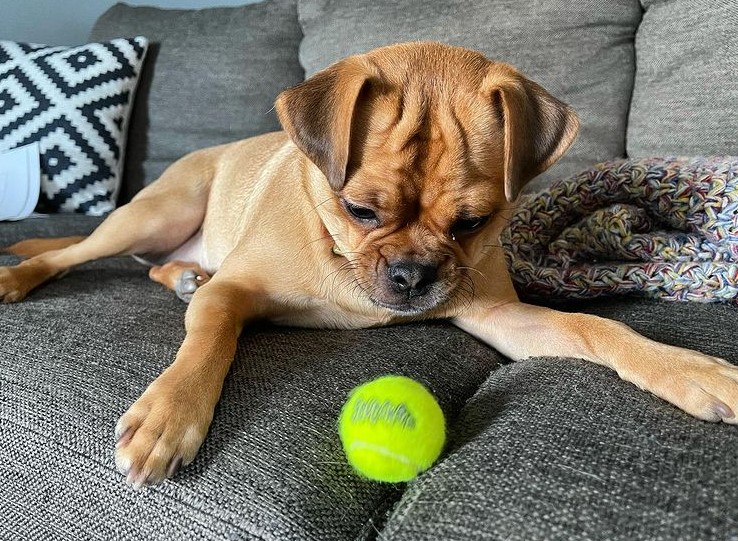 The Chug is rarely used in any other capacity than as a companion. However, it is necessary to train them in a few basic commands and to form a harmonious character. Otherwise, the dog will be spoiled, and this is not good, since it simply will not obey you and will become a source of headache.

Be sure to focus on undo commands, as this will not only help save your pet from various troubles but will also play a big role in shaping character. If you want to train your dog in more difficult commands, you need to do the training in a playful way. 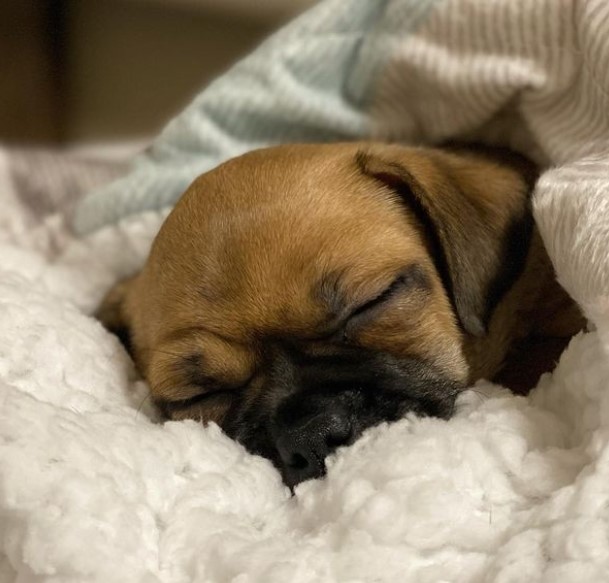 Chugs often shed moderately, so regular brushing is absolutely essential to remove dead hair. The wrinkles on the face should be clean and dry, wipe them with a damp cloth and then pat dry. This should be done every day, every week, or every month, depending on the dog’s needs. Trimming your nails, brushing your ears, and brushing your teeth regularly are all part of the grooming routine. 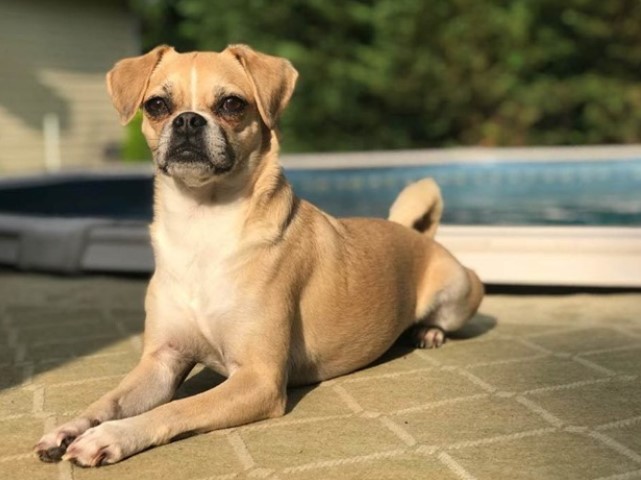 These dogs are generally in good health. But they can still be susceptible to diseases of the parent breeds. Among them: 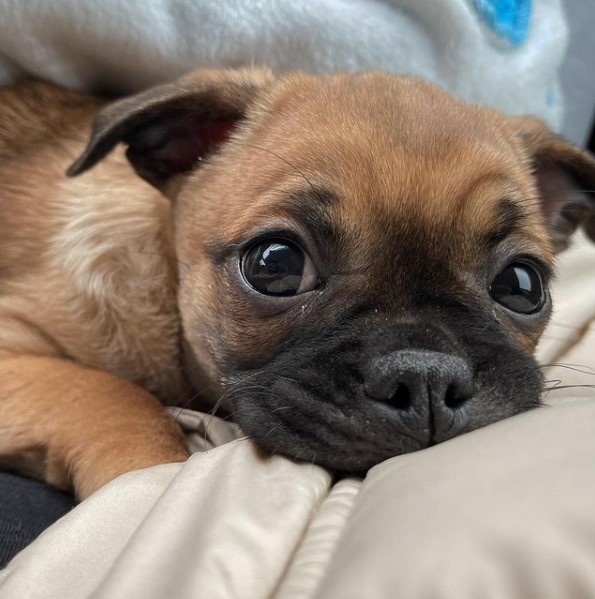 Keeping Chug in the house means constantly feeling peace and tranquility, receiving aesthetic pleasure and joy. Chugs are ready to keep the company in any action: they walk, sit, watch TV and sleep with the owner. In the behavior on the hands of the dogs, they are surprisingly calm. The dog gets along with small children if they do not offend him. Chugs are often bought for seniors as companions.