With all the love and trust dogs show us, it’s no wonder we want to show them how much we appreciate them. And we do that by kissing her! And even more often than the partner, as a study shows! But dog kisses also harbor dangers.

We love our dogs. And we want to show them that too! But it is often said that dogs can transmit life-threatening diseases to humans through their kisses. 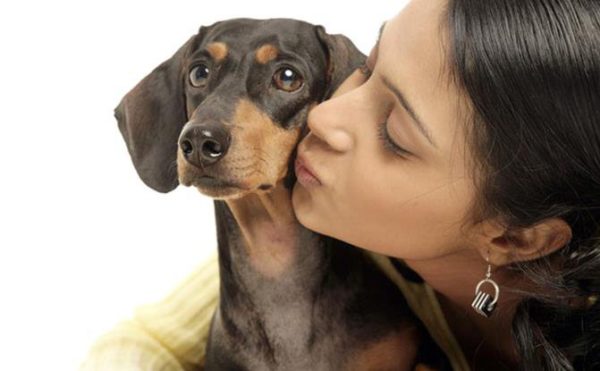 According to an online survey by a US organic dog food manufacturer, 52% of dog owners surveyed kiss their dog more often than their partner.

Already knew? As Swiss scientists have found, dog fur is often cleaner than many men’s beards! So it’s no wonder that dog kisses are often more popular!
The love for dogs sometimes goes so far that we cannot spend the nights without them. Also 52% of the dog owners in the online study stated that they would rather have their dog in bed than their partner!

Does that surprise you? The study participants give a very plausible explanation for this: For us, our dog is one of our best friends. At least 94% of those surveyed describe their four-legged friend that way. So it’s no wonder that we shower the dog with so much affection. Because he should know that he is something very special for us.

Are dog kisses healthy or dangerous? The dog kiss is very controversial. Some consider him very dangerous, others think he is even healthy. Because scientists in the USA believe that dog kisses even have a positive effect on our health. They assume that the wet dog snout stimulates the growth of benign microorganisms in the human body and thus promotes our health and resistance.

However, this has not yet been proven. What is certain, however, is that children who grow up with dogs are less likely to suffer from respiratory diseases and allergies.

On the other hand, it is said again and again that dog kisses can be dangerous and even life-threatening, since the dog can transmit bacteria and pathogens when it licks its mistress or master over the face.

Even if it is unlikely that you will become seriously ill from a dog kiss, it cannot be ruled out. You should avoid a dog kiss in the following situations (regardless of whether you kiss the dog on the fur or the dog kisses you with its muzzle):

You should also be careful with children. So always take the care of your dog seriously, make sure he doesn’t have any parasites like ticks, fleas or mites before letting him sleep in the bed and be aware that a dog kiss can also be dangerous.