Originally, the Dogue de Bordeaux was used to protect herds and to hunt bulls. Find out everything about the behavior, character, activity and exercise needs, training and care of the Bordeaux Mastiff dog breed in the profile.

Origin of the Dogue de Bordeaux 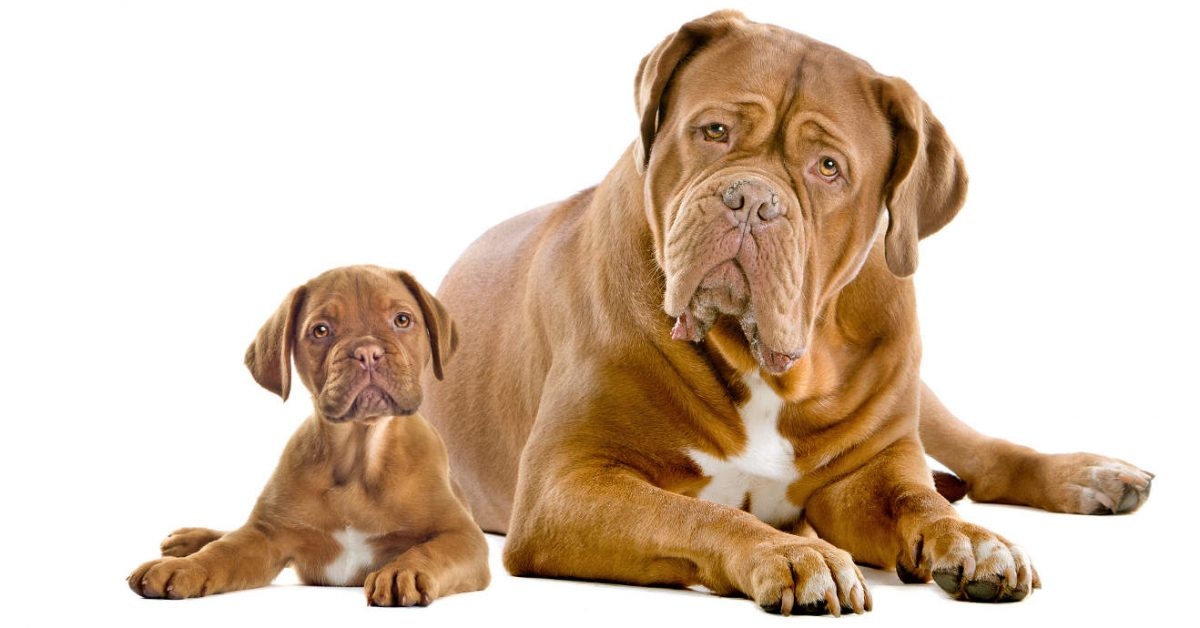 The ancestors of the Dogue de Bordeaux were the Molossian dogs of the Romans. Originally it was used to protect herds and hunt bulls. Unfortunately, for a long time she was also very popular in dog fights in the arena. In France, the breed was “cultivated” as a butcher’s dog in the Bordeaux region.

The breeders there made it a point to keep the dog alert but to curb the fighting instinct. Today, Bordeaux mastiffs are also very popular as family dogs.

The Dogue de Bordeaux is similar in type to a short-headed Molosser. She is a very strong dog whose extremely muscular body maintains a harmonious overall appearance, according to the breed standard. She is also stocky, athletic, imposing and very formidable due to her size and strong head. The fur is short and gold or mahogany in color.

The Bordeaux mastiff is basically a good companion for humans, very affectionate, calm, balanced and loving towards weaker ones such as children. However, it is also very suitable for guarding tasks, which it fulfills with attentiveness and great courage, but without aggressiveness. It seems as if this dog is aware of his powerful appearance and therefore shows a high threshold of relaxation.

These mastiffs would never attack outside of a genuinely dangerous situation – and they are very good at recognizing when action is needed. They are loyal to their family and friends, would sacrifice themselves for their “pack” at any time, but do not put on a big show beforehand: A frown and a slightly annoyed “Woof!” is usually enough to guard this Great Dane. If you have all your wits about you, you’ll run away.

The Bordeaux mastiff likes to go on long walks and short bike rides. She doesn’t need or want much more. She is unsuitable as a “sports machine”, but still wants to spend a lot of time with fellow animals and outdoors – but there she wants to decide for herself whether she runs or sniffs.

She is also happy to have her own large garden, because narrow spaces make her grumpy. Basically, she needs a lot of space because she wants to be able to move freely. This dog is therefore not suitable for an apartment.

Breeding of the Dogue De Bordeaux

It is said that an order from you is not much more than a basis for discussion for the Bordeaux mastiff. That’s not true: If this Great Dane is brought up well at an early age, it is a very reliable companion that largely avoids trials of strength.

At a young age, however, this dog has trouble realizing just how strong it is. Because of sheer enthusiasm, a person can be brought down. But that is never meant in a bad way. Because the Dogue de Bordeaux doesn’t know how strong she is, her temperament has to be curbed a little at first or clear boundaries have to be shown to her. Over the years, however, she becomes much calmer and can better assess her own strength.

Care of the Dogue de Bordeaux

The close-fitting, short fur is insensitive. It is quite enough to brush the fur vigorously from time to time to free it from dirt.

The short nose can cause respiratory problems. There is also a risk of drooping lids, entropion, ectropion, and gastric torsion. Despite their strength of character, the Bordeaux mastiffs are still labeled as “fighting dogs” in some federal states. Unfortunately, this is a remnant from the time when these dogs were bred for sharpness. Reputable breeders have not done this for a long time. Nevertheless, one should inquire about local regulations before purchasing this breed.