The Flat-Coated Retriever is a medium to a large-sized dog with harmonious lines, showing a general aspect of strength without being heavier. The retriever’s expression is lively and intelligent. It is similar in many ways to the Golden Retriever and Labrador Retriever, but less well known. 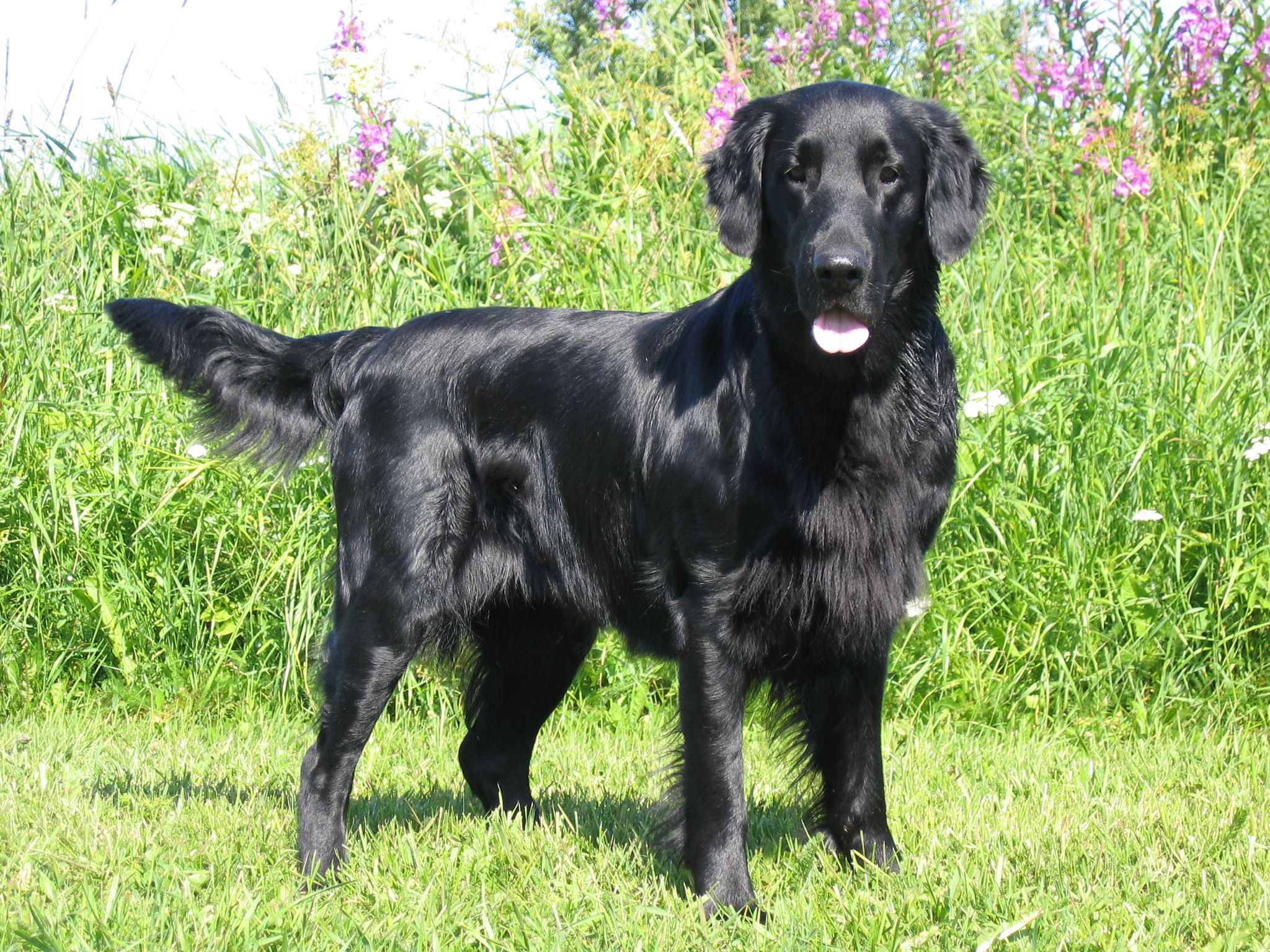 Introduced in mid-19th century England, the flat-coated retriever gained popularity as a gamekeeper’s dog. It is believed that some of his ancestors descended from the livestock brought from North America from the now extinct water dog of St. John, but this has not been confirmed. It is believed that Canadian seafarers brought the Newfoundlands to British ports and contributed to the origin of the flat-haired retriever. Collie dogs may have been added to enhance the breed’s trainability, along with Newfoundland for strength and setter blood for improved sniffing ability. The first examples of the breed were introduced around 1860, but the final type was not established until 20 years later.

After its introduction in the United States, the flat-coated retriever quickly gained popularity as a hunting dog, and from 1873, when the breed became a “stable type” according to the American Kennel Club, until 1915 when it was officially recognized as a breed, their numbers quickly grew. However, their popularity began to wane shortly thereafter, overshadowed by the Golden Retriever, which was actually bred in part from flat-coated retrievers along with other breeds. By the end of World War II, there were so few flat-coated retrievers that the breed’s survival was questionable. However, since the 1960s, careful selection has brought back the population and the breed gained popularity again, both for sport in show conformation and as a companion pet. Today, the flat-coated retriever enjoys modest popularity and progresses as a breed through careful breeding for conformation, health, versatile talent, and exceptional temperament that are its hallmarks. He has not yet returned in significant numbers to field competition.

In 2011, Sh. C. Vbos The Kentuckian ‘(aka Jet), a 9.5-year-old flat-coated retriever from South Queensferry, near Edinburgh, Scotland, won Best in Show on Crufts. Almanza Far and Flyg (aka Simon) from Oslo, Norway, won the Gundog group at Crufts in 2007. Prior to that, in 2003 the Swedish dog Inkwells Named Shadow also won the Gundog group. The last British dog to win a Gundog Group Crufts was the “Sh Ch Gayplume Dream-maker” in 2002. The only other flat-coated retriever to win Best in Show on Crufts was’ Ch. Shargleam Blackcap ”in 1980. These victories contributed to the popularity of the breed in Europe and Great Britain. 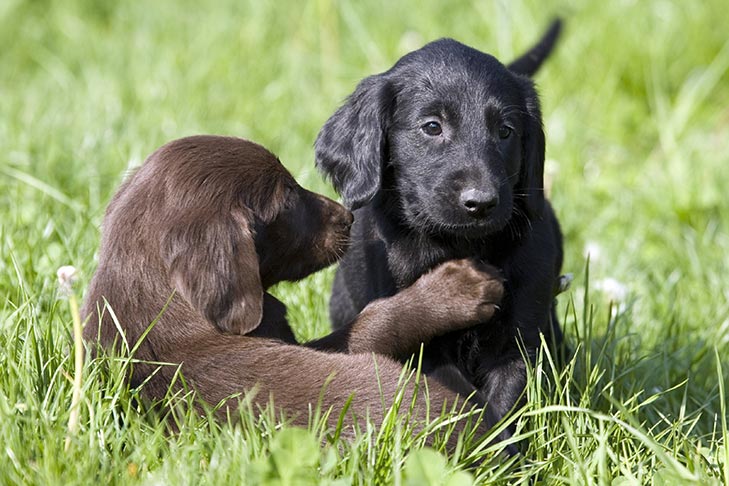 The Flat-Coated Retriever breed standard requires males to be 23-25 ​​inches (58-64 cm) tall at the withers, the recommended weight is 60-80 pounds (27-36 kg), and bitches 22-22 cm. 24 inches (56- 61 cm) with a recommended weight of 55–75 lbs (25–34 kg). The Flat-Coated Retriever has strong, muscular jaws and a relatively long snout. Its head is unique to this breed and is described as “one-piece” with a minimal stop and part about the same length as the muzzle. He has almond-shaped dark brown eyes with a smart, friendly expression. The ears are pendant, relatively small, close to the head. The back of the head (the bone at the back of the skull) should not be accentuated (as, for example, in setters), the head smoothly merges into a well-arched neck. The topline is strong and straight, with a well-pubescent tail of medium length extending straight from the back. This breed should have good angulation of the forelegs and hindquarters, allowing movement freely and effortlessly. 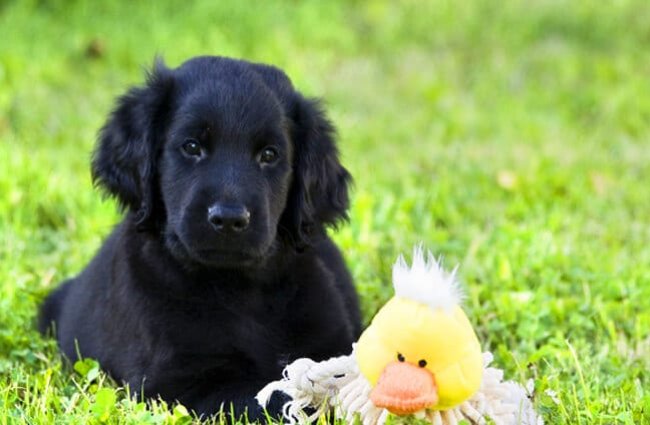 The coat is of medium length, dense and dense, shiny. The ideal coat is straight and smooth. Slight waviness is acceptable, but hair should not be frizzy, short, coarse, silky, or frizzy. The smooth-haired retriever is a working dog, and the coat must protect it from bad weather, water, and other adverse conditions. This requires a certain quality, texture, length, and density from the coat. A dog dressed in winter wool has thick, but not hard, fluffy or silky feathers on the ears, chest, abdomen, back surface of the front and hind limbs, and a dewlap on the tail. A mane of longer and heavier hair on the neck, withers, and shoulders is considered typical, especially in males. For this reason, the neck may appear thicker and the withers taller, sometimes giving the impression of sinking on the back behind the withers. Considering that the smooth-haired retriever is a hunting dog, feathering and dewlap should not be excessively long. A haircut. Smooth-haired retrievers should be shown in natural coats, so the unshorn coat is preferred if it is clean and well combed. Special care is allowed for the hair on the ears, paws, belly, and end of the tail. The mustache has a specific function and it is best not to cut it. Shaving or trimming the head, neck, or body is not permitted and should be severely penalized.

The color is solid black or liver (reddish-brown).
Disqualifying faults: yellow, cream, or any color other than black and liver. 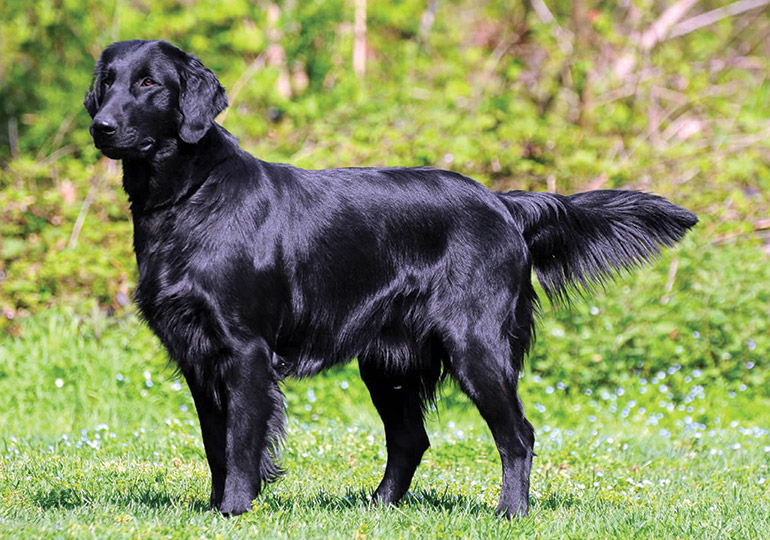 The Flat-Coated Retriever is an active, versatile bird dog with a strong desire to please people. Energetic, confident, and outgoing, they become a loving pet and can be companions to young children if adults are there to channel this dog’s furious enthusiasm. They usually get along very well with other dogs and even cats. These retrievers require a lot of exercise and activity to channel their natural athletic energy. The British Kennel Club recommends that owners train their dogs for at least 2 hours a day. While they will defend their owners and property with assertive barking, they are unlikely to back up such noise with real aggression. Because of their excellent sense of smell, combined with boundless energy and desire to please their owners, they are sometimes used as drug hunting dogs. They are used by the Guide Dog Association for the Blind in the UK, both as a breed and as a cross with a Labrador Retriever.

Fast-paced and quick to learn, they are best trained at short intervals as they can tire with repetition. The Flat-Coated Retriever is a slowly maturing dog, as it does not reach full maturity until 3-5 years old. Even so, these dogs retain their youthful, puppy appearance and demeanor until old age. Paddy Petsch, the author of The Fat Flat-Coated Retriever, calls these dogs the “Peter Pan” of the Retriever breeds, given that they never grow up.

The Flat-Coated Retriever is a “natural” breed and enjoys taking part in “natural” activities such as riding in the feces, playing in the mud, and digging. These dogs are also “thinking” dogs, meaning they want to please but look for a way to break the rules. This characteristic helps with their hunting abilities, but only if they are associated with their owner. These dogs will work for themselves or not work at all if there is no motivation to work with a handler or liaison. 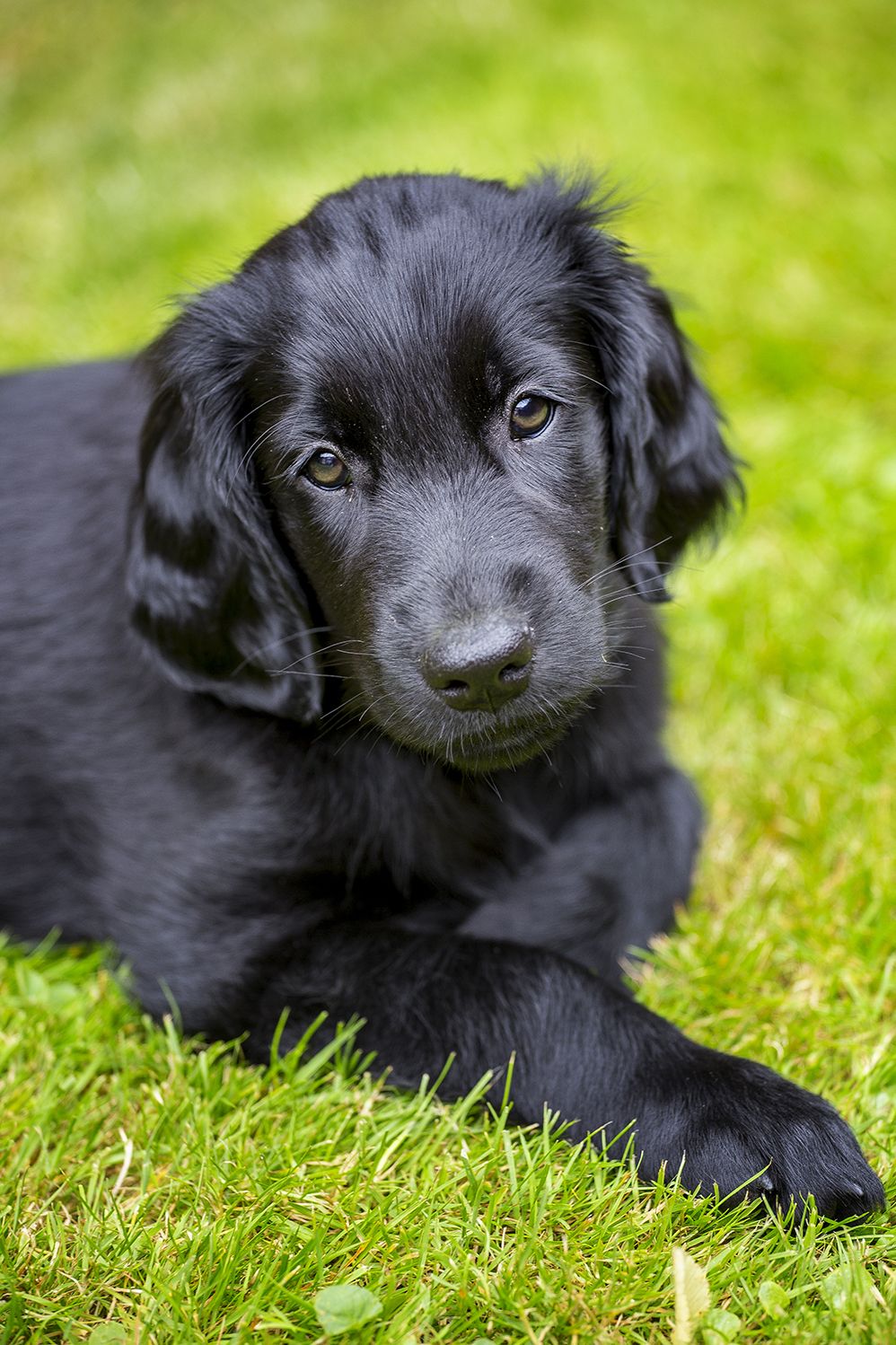 The Flat-Coated Retriever can lose a lot of its coat during shedding. The rest of its maintenance is fairly simple and straightforward.

It is recommended to brush the dog with a FURminator brush to get rid of dead hair, especially during the shedding period. 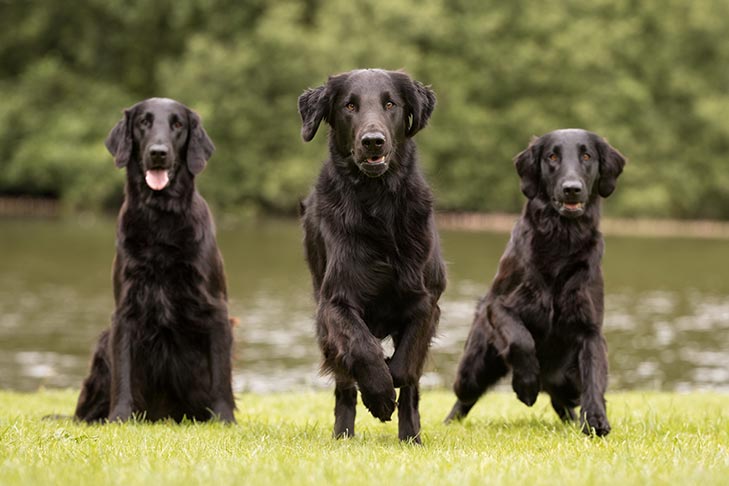 The Flat-Coated Retriever should receive an education based on both firmness and consistency, without seeking a balance of power. Lively, intelligent, and energetic, the flat-coated retriever learns quickly through play and rewards. It is a very easy to train and very obedient dog. 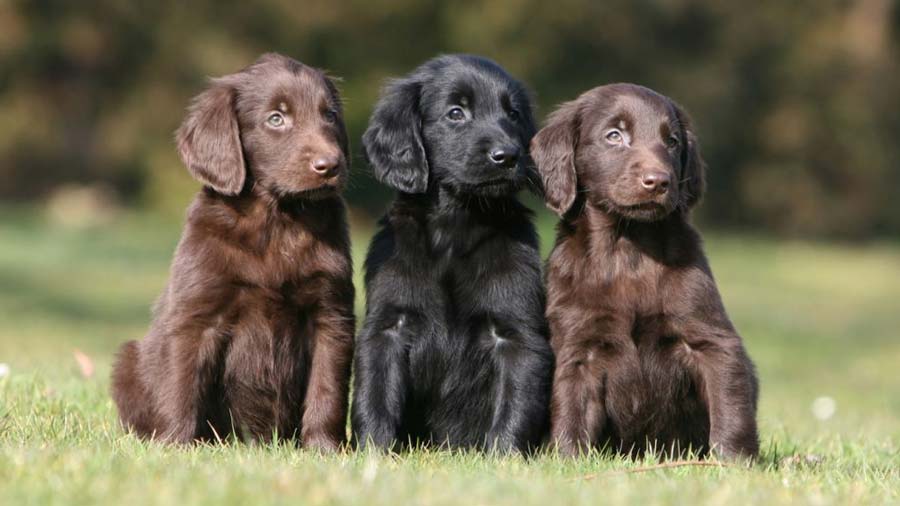 Breeders should regularly test and approve hereditary joint diseases such as hip dysplasia, deafness, and eye diseases such as progressive retinal atrophy and glaucoma on any dog ​​used inbreeding. This breed also occasionally has epilepsy.

Flat-Coated Retrievers have a higher risk of cancer than most dogs. Hemangiosarcoma, fibrosarcoma, osteosarcoma, and malignant histiocytosis are particularly damaging and more common in them than in many other breeds. According to research sponsored by the Flat-Coated Retriever Society of America (FCRSA), the average lifespan of flat-coated retrievers is only about eight years, with a high percentage of cancer deaths. More recent studies in Denmark and the UK show that the average life expectancy is around 10 years. The 2010 UK Purebred Dog Health Survey found that approximately 50% of flat retriever deaths were due to some form of cancer.

Another more common condition in flat-coated retrievers is stomach volvulus, also known as bloating. This is not common with flat coats, but usually due to their large size and deep chest. If left untreated, the dog will die quickly. Volvulus is responsible for 5% of all flat retriever deaths and about 20% of non-tumor deaths.

Flat-Coated Retrievers have very low rates of hip dysplasia and patellar dislocation compared to other medium-sized breeds; The Orthopedic Foundation for Animal Statistics consistently shows the rate of hip dysplasia in the breed at less than 3%. In the 1997 FCRSA Health Review, 4.2% of men and 3.2% of women were diagnosed with patellar dislocation.