French Bullhuahua is a cross between Chihuahua and French Bulldog. These dogs have inherited the best qualities of the parent breeds. They are very intelligent, sensitive, and friendly. They have a brave heart. They love to be around people, especially in the company of their owners. With the right upbringing and training, they can become great friends and even protectors.
It is impossible not to fall in love with this dog! But if you are going to become a parent of this puppy, you need to know more about him. 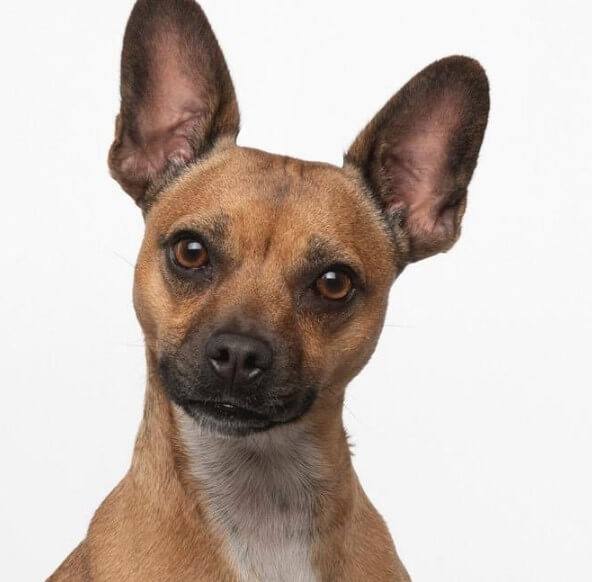 The French Bullhuahua is a small dog, size can vary greatly depending on parental influence. His weight can range from 10 to 30 pounds and his height is from 6 to 12 inches. The length, color, and structure of the coat can also vary, depending on the specific traits that he inherited from his parents. The French Bullhuahua can be seen in a variety of colors, including black, black, and tan, brindle, brown, cream, golden, merle, speckled, spotted, and white. The head is often larger than the body, with large, dark eyes that may bulge somewhat. His ears will be erect but may be bat-like, like a French Bulldog, or smaller, like a Chihuahua. The muzzle can be flat, like the parents of a French Bulldog, or small and pointed, like a Chihuahua. Its tail will be small and may curl slightly. 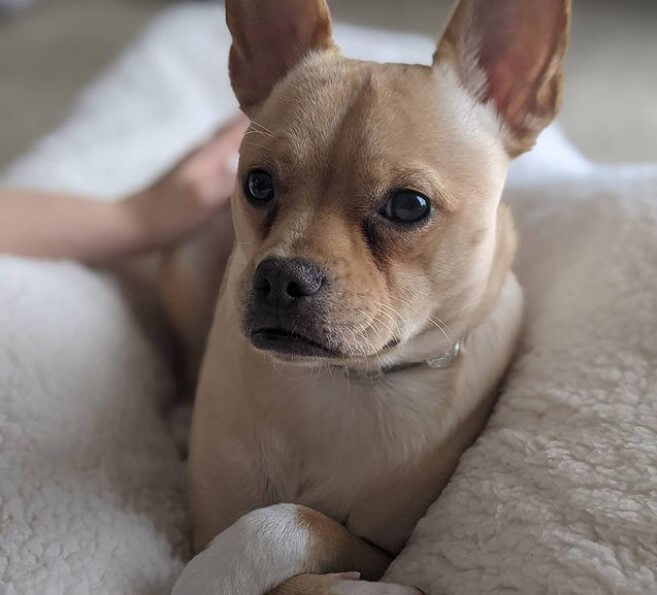 Both French Bullhuahua parents are known for their relatively obstinate temperament, which is stubborn and quick-tempered. These traits can be passed on to a French Bullhuahua puppy, be prepared for them. The owner should be willing to work on these traits when they begin training their puppies.

French Bullhuahuas are very attached to their owners, they are ready to chat 24 hours a day, they like to be in the spotlight. Loneliness is not tolerated well, but it is tolerated in silence. They are sensitive to changes in mood, they are not imposed if the owner is busy. On the street, they fiercely protect the owner if they sense danger. Young French Bullhuahuas up to 5 – 6 years old is able to play at any time. With age, they become a little calmer and more restrained. For the harmonious development of the French Bullhuahua, new experiences are walks where he can throw out energy. Being at home changes behavior for the worse, even if the dog is being trained. Out of boredom, she gnaws at the master’s things, makes a mess in the room, goes to the toilet in the wrong places.

French Bullhuahua loves children’s society, does not offend, does not bite children. The first month after the appearance of the baby, the dog can become sad, demanding increased attention. But jealousy is quickly replaced by affection for a new family member. Babies under 6 years old are not left unattended with the dog. The animal may not calculate the forces, inadvertently push, accidentally scratch.  It is better for younger students to immediately tell how to communicate with a pet. To teach not to pull the tail, paws, and ears, not to touch the dog while eating.
French Bullhuahuas get along well with cats and dogs. In the company of another animal, they are less bored. However, on the street, an untrained dog can provoke a fight with a strong rival, because he is not aware of his small size. 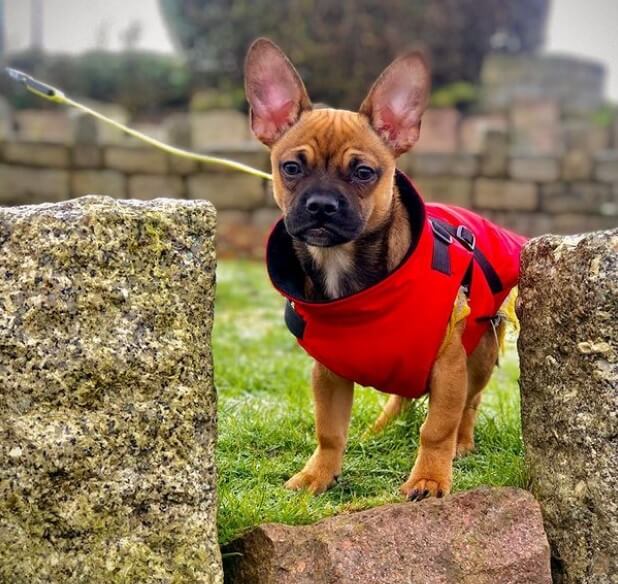 The family took a long time to make a decision, and now the baby French Bullhuahua appeared in the house. From the first days, it is important to lay the right foundation for raising a dog. Purchase in advance many useful things to help your little puppy feel more comfortable and cozy in the new home. The French Bullhuahua needs constant training at a young age. With systematic training, when a certain schedule has been developed, training will not cause difficulties for either the owner or the pet.

French Bullhuahua training begins at a young age, making it easier to develop skills. French Bullhuahuas are usually sensitive dogs, instantly catching the intonation in the owner’s voice, look, and behavior. During training, owners need to be patient, do not raise their voice at the pet. French Bullhuahuas are diligent, they easily absorb new information, but it is better to repeat new commands periodically until the animal develops a reflex to the spoken word. 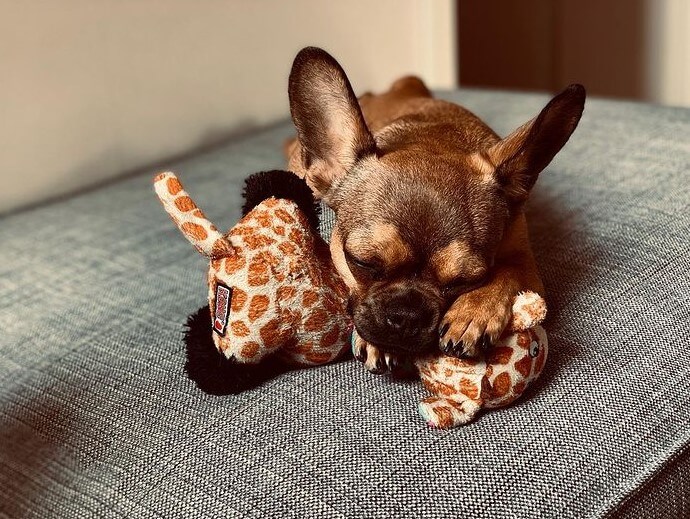 The French Bullhuahua most often has short hair that usually does not shed much. Care coat requires minimal effort. This can be done quickly with a smooth brush that glides over the coat, removing loose fur and dirt. As a rule, French Bullhuahuas are clean, dogs do not have a characteristic specific smell.

Pay attention to your animal’s ears. To avoid inflammation caused by accumulated dirt and earwax, your pet should clean its ears every two weeks. Take care of the dog’s eyes, carefully monitor their condition. When the dog is healthy, the eyes are also healthy. Teary, with purulent exudate, reddened, or cloudy eyes indicate a disease. If the eyes are healthy, it is advisable to wipe the organs of vision every morning with a damp cloth moistened with plain water.

In the process of hygiene procedures, do not forget about your pet’s teeth. It is not recommended to give the dog bones often, French Bullhuahua teeth are quickly worn down. 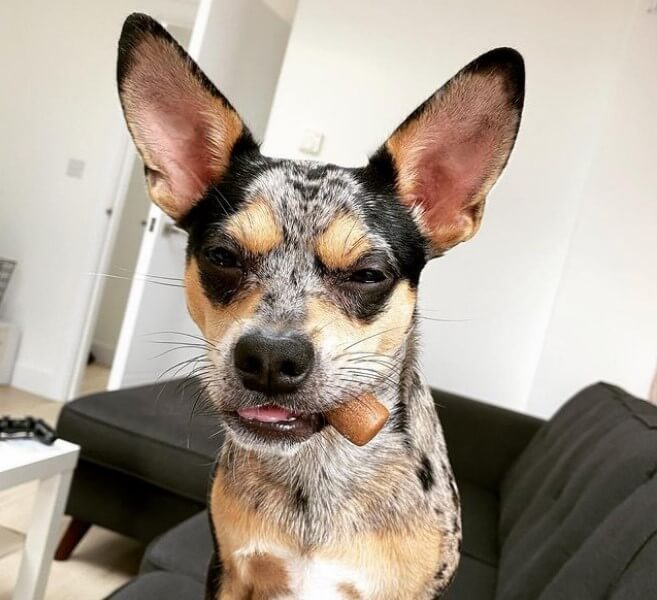 Allocate a separate corner for your dog to eat, where he will eat in two meals, morning and evening. The puppy is fed more often, every 2.5-3 hours. An adult dog is given 70% of the daily food intake a day before bedtime and 30% in the morning. You don’t need to feed the dog from a dish with bulges, you don’t need to buy a large bowl for your baby: you’ll start filling it to the top, which leads to loss of appetite or obesity. Hand-feeding a dog is not worth it, as well as feeding anywhere in the apartment. The eating place is permanently set.

When feeding the French Bullhuahua dry food or natural products, there are a number of things to consider:

When trying to properly feed French Bullhuahua puppies with their food, stick to the breeder’s diet. Transfer to a new diet gradually. 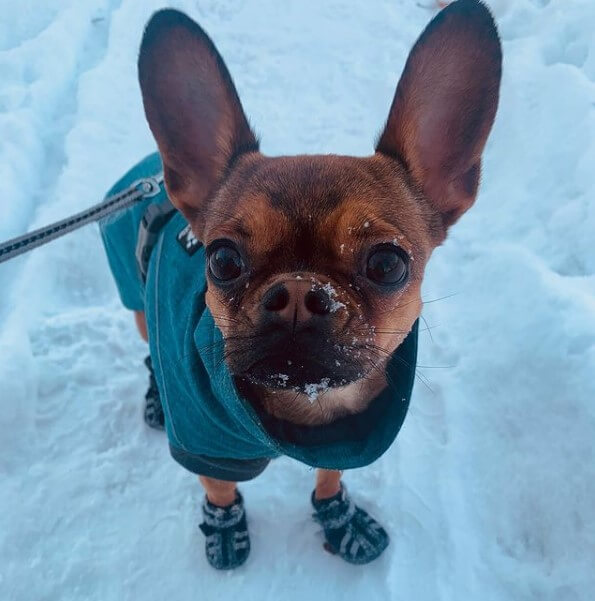 Like all mixed breeds, the French Bullhuahua is prone to inheriting certain conditions common to both parents. In general, these are healthy dogs, but it is worth visiting veterinary clinics regularly to prevent such diseases: 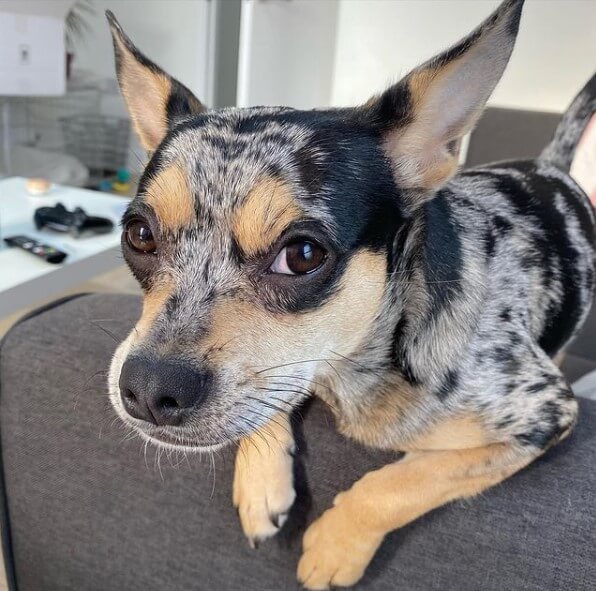 French Bullhuahua will be a great friend for everyone: young people, seniors, families with children. The main thing is that the owner is ready to raise the dog, devote time to games, walking.