Gastric torsion is a life-threatening emergency that requires immediate action. Read here how to recognize a torsion in your dog’s stomach, what the causes are and how to act correctly.

In gastric torsion, the dog’s stomach rotates on its own axis. This blocks the entrance and exit of the stomach. Gases are produced that inflate the stomach. This takes up more and more space in the abdomen and squeezes blood vessels, among other things. Shock occurs and there is a risk of life-threatening cardiovascular failure.

Causes of gastric torsion in dogs

What exactly triggers a stomach torsion in dogs is not certain. It has long been assumed that a twisted stomach occurs when dogs romp and play with a full stomach after eating. However, since it is not uncommon for dogs that are on an empty stomach or dogs that have rested after eating to suffer from torsion in the stomach, this cannot be the only cause. Other risk factors are:

Dr. Peter Scabell, veterinarian specializing in surgery at the veterinary clinic in Oberhaching, also suspects in our “A Heart for Animals Podcast” that weather changes, fluctuations in air pressure, and thunderstorms can also trigger stomach torsion in dogs.

Which dog breeds are, particularly at risk?

Dogs with a deep chest and large dog breeds, such as German Shepherds, Doberman Pinschers, Great Danes, St. Bernards, Wolfhounds, and Bernese Mountain Dogs, are particularly affected by torsion of the stomach. Small dogs are much less likely to suffer from gastric torsion. In addition, older dogs from about five years of age are more susceptible. Your gastric bands lose strength and are no longer able to hold the stomach in place as well. In very large dogs, the risk of stomach torsion increases from the age of three.

There is no time to lose with a torsion, which is why it is important to recognize symptoms early. Symptoms of torsion in the dog can include:

The more time passes, the worse the dog’s condition becomes: first he is restless and panting, then he becomes apathetic and weak. If nothing is done, at some point he will no longer be able to get up, collapses, remains on his side, and suffers a fatal circulatory shock.

How to act correctly

As soon as your dog shows the first symptoms and you only suspect that your dog might have torsion in the stomach, there is no time to lose. No matter what time it is, get to a veterinarian or animal clinic that can perform surgery as soon as possible. Because the dog’s life can only be saved by an immediate operation.

First-aid by the owner is a waste of time here. It is best to call on the way to the clinic so that everything can go quickly when you get there.

If the dog already shows symptoms such as pale mucous membranes or is even in shock, you should transport it so that it is positioned higher at the back to stabilize its circulation. If he has lost consciousness, put him in the recovery position.

Stomach torsion often happens at night. In such a case, your dog will usually make itself known and wake you up. Waiting here until the next day is completely wrong! By then, your dog may already be dead with an untreated gastric torsion.

Emergency surgery is the only way to save the dog’s life. When you arrive at the veterinary clinic, the dog’s circulation is first stabilized and gases that have accumulated in the stomach are released.

During the surgery, the dog’s stomach is gassed, emptied, and then turned back. It is also checked whether other organs such as the spleen have suffered damage. If it dies, it must be removed. The stomach wall is often sutured to the abdominal wall to prevent the stomach from rotating again.

Not all dogs survive emergency surgery

Depending on how much time has passed, some dogs may not survive the torsion. You can die during or after the surgery. The constriction of gastric blood vessels can cause gastric mucosal areas to die off. If only individual sections are affected, these can often be removed or sewn up.

However, if the stomach is almost completely dead, the dog can usually no longer be helped. In addition, some dogs do not survive the anesthesia due to the severe circulatory shock. It can also be fatal if other organs such as the liver, kidneys, heart, or lungs are affected.

After the emergency operation, the dog has not yet fully recovered from the torsion of the stomach. Because even several hours or days later, there can still be consequences such as cardiac arrhythmia. Therefore, dogs with a torsion in the stomach are usually monitored for a few more days in the veterinary clinic.

How can you prevent torsion in the stomach? 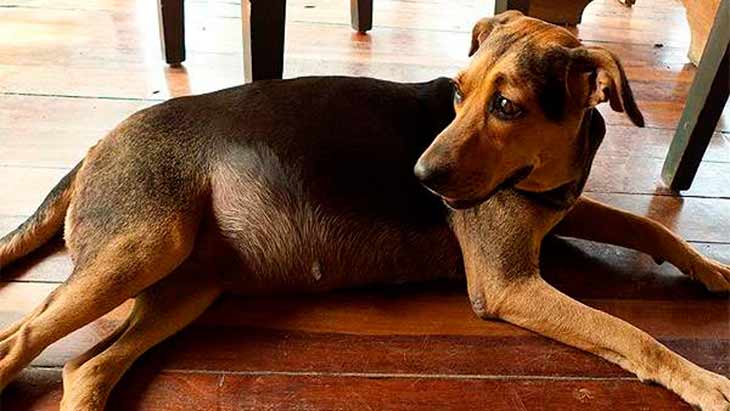 Even if it is not entirely clear what causes a stomach torsion in dogs, owners of particularly endangered breeds can take a few precautions to reduce the risk: