Pedigree dog lovers often state that mixed breed dogs are unethical and have health problems compared to purebred dogs. They argue that pedigree is the best way to get a quality dog.

For a dog to be purebred, both parents must be on the same list of dog breeds that meet a certain standard. This lack of genetic diversity leads to general poor health.

Hybrids have fewer problems because their DNA comes from two dogs with more genetic differences. You are less likely to inherit unhealthy genes.

However, we are here to talk about a specific hybrid, the husky/golden retriever mix. 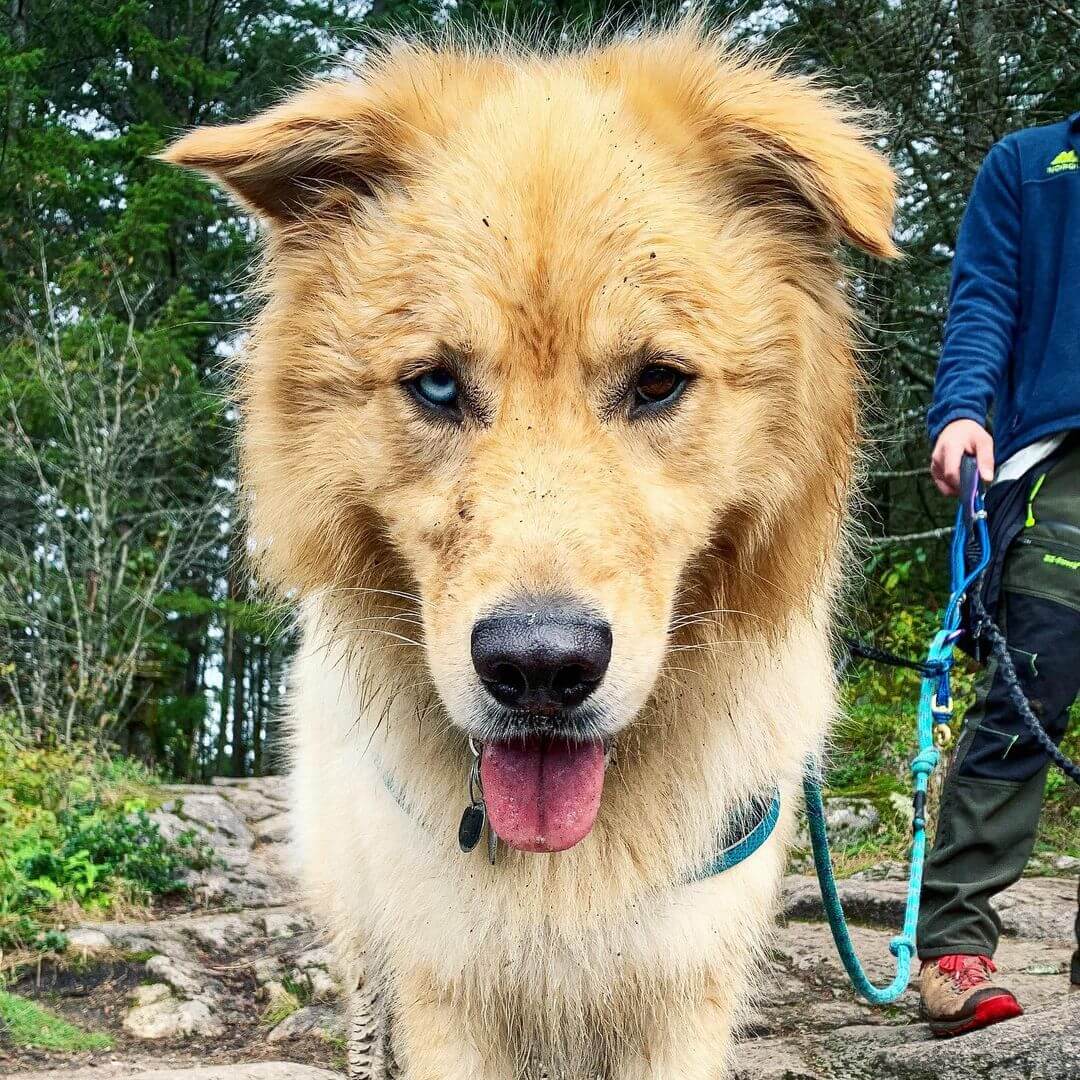 We don’t know who first mixed the golden retriever with the husky. However, it is known that this cross appeared in the early 2000s.

However, two-parent breeds have a long history.

According to a 2004 study, the Siberian Husky is one of the few dog breeds with truly ancient roots. The breed originated from the Chukchi in the Russian Far East, who worked as a sled dog for hunting in large areas.

Russian traders brought huskies to Alaska for gold miners and Arctic explorers in the early 1900s. The husky quickly gained popularity among sled dog drivers. They were smaller, faster, and more stable than the local sled dogs that were bred to carry goods.

The Golden Retriever was bred in Scotland in the mid-19th century. They needed a retriever that could work both on land and on water.

A Note About Mixed Breed Dogs 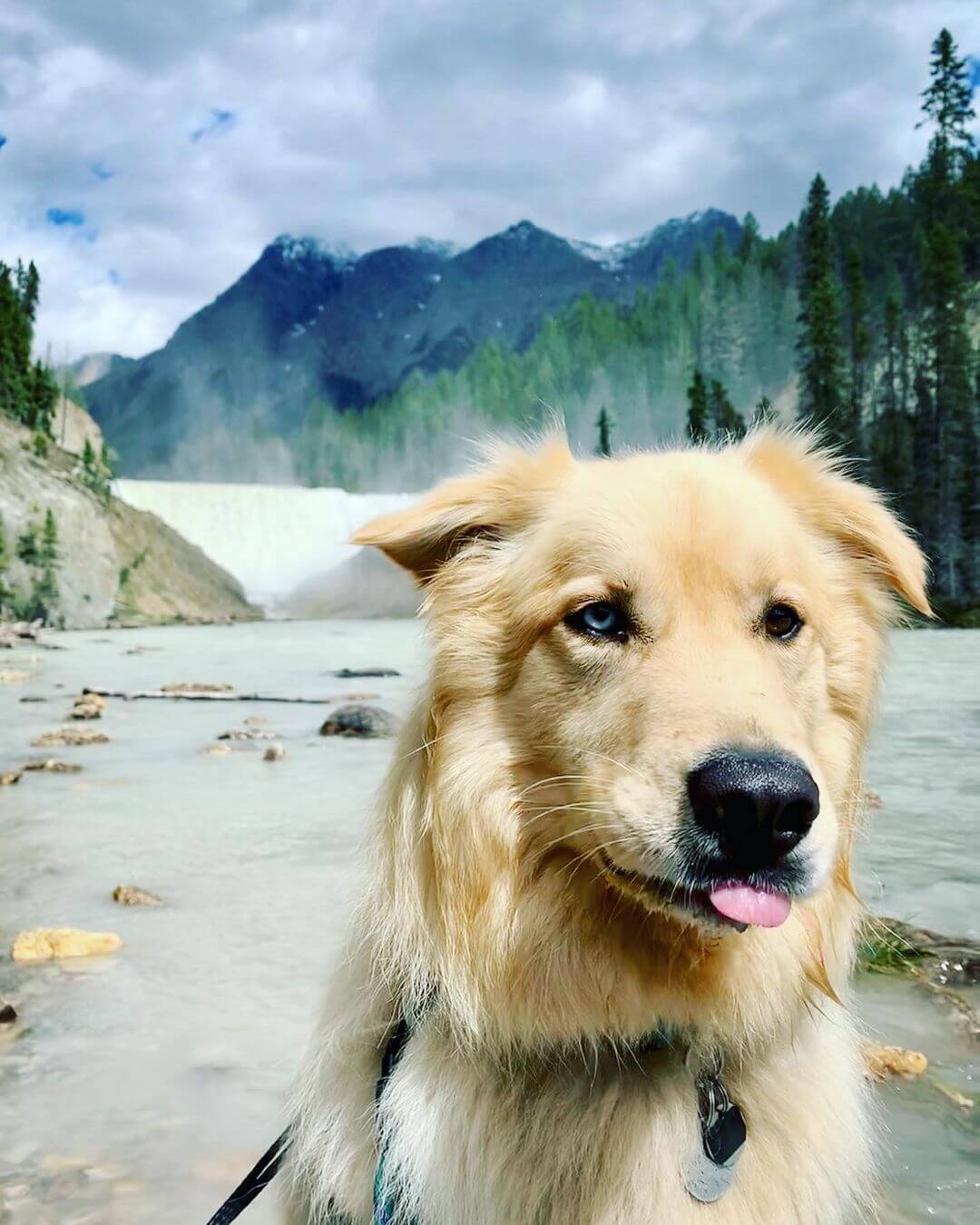 It is important to emphasize that a mixed breed can inherit traits from any parent breed. Hence, much less predictable than for purebred dogs.

However, we can define a number of traits, traits of parental breeds.

Now let’s see what to expect from the Golden Husky mix! 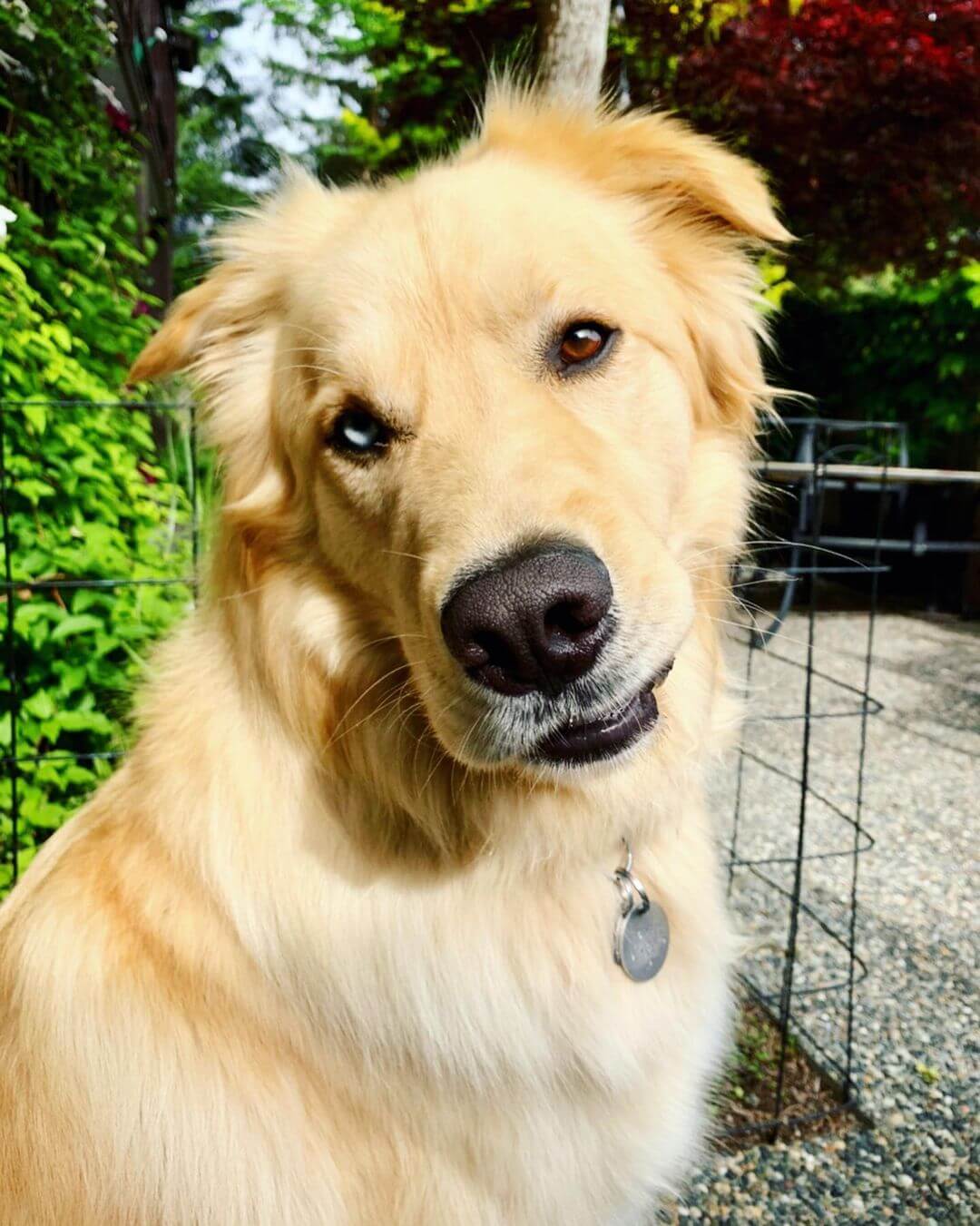 The Siberian Husky and Golden Retriever have the same height, so the Golden Husky’s potential growth range is rather narrow.

According to the American Kennel Club, the average height of Siberian Husky males is 21 to 23.5 inches, while females are 20 to 22 inches. The average male golden retriever is seven to seven inches tall and the average female is eight to eight inches tall.

Despite similar heights, the two dogs have very different physiques, so their weight and build have a greater range.

Do you see what we mean by less predictable? 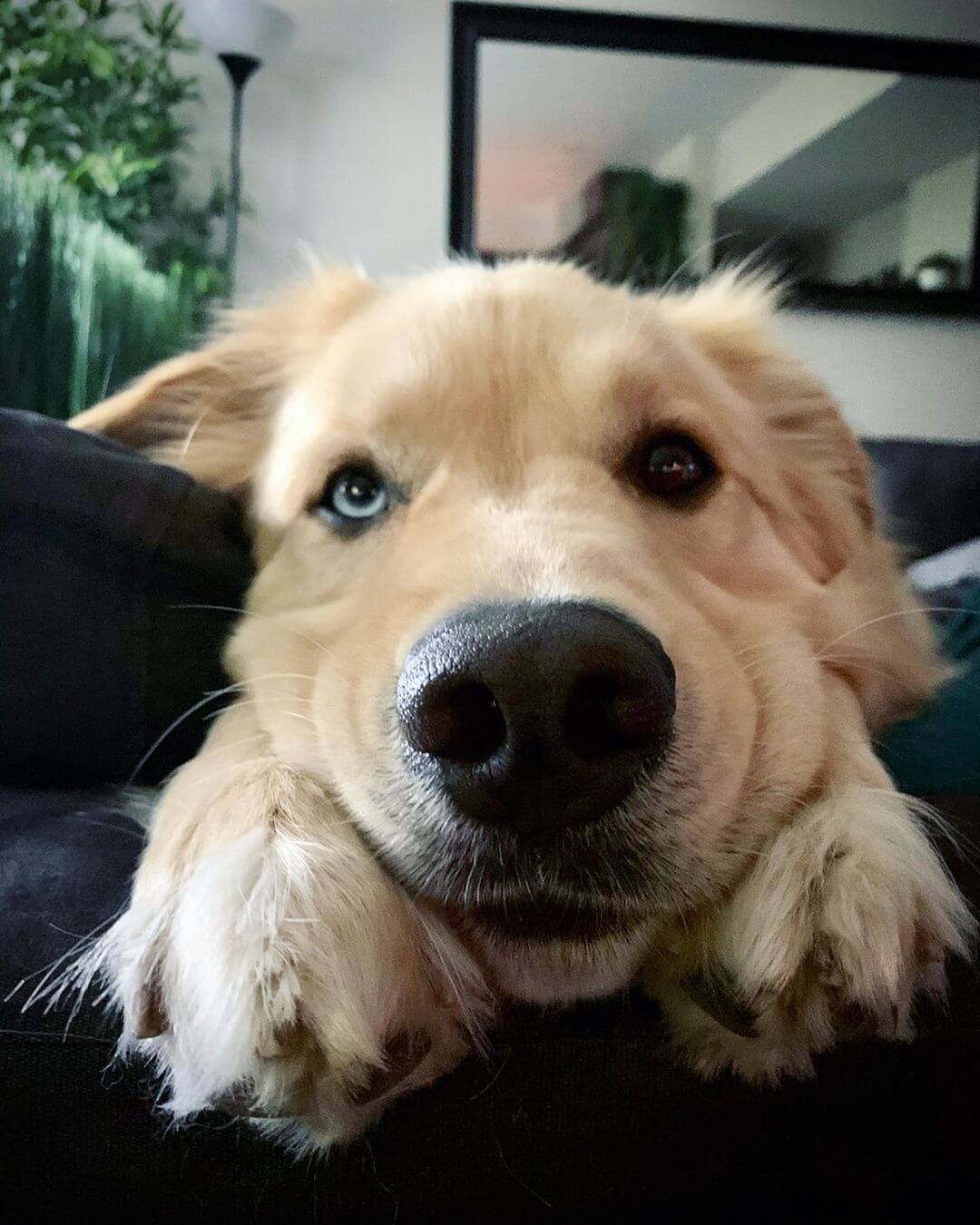 The Siberian Husky and Golden Retriever have distinctive coats. However, they have enough in common to show certain characteristics.

Both the Husky and the Golden Retriever have a medium-length, water-repellent double coat that falls off with the seasons. You can expect the same from your Golden Husky mix.

However, there are also some distinctive traits of each breed that your husky can mix with your golden retriever. 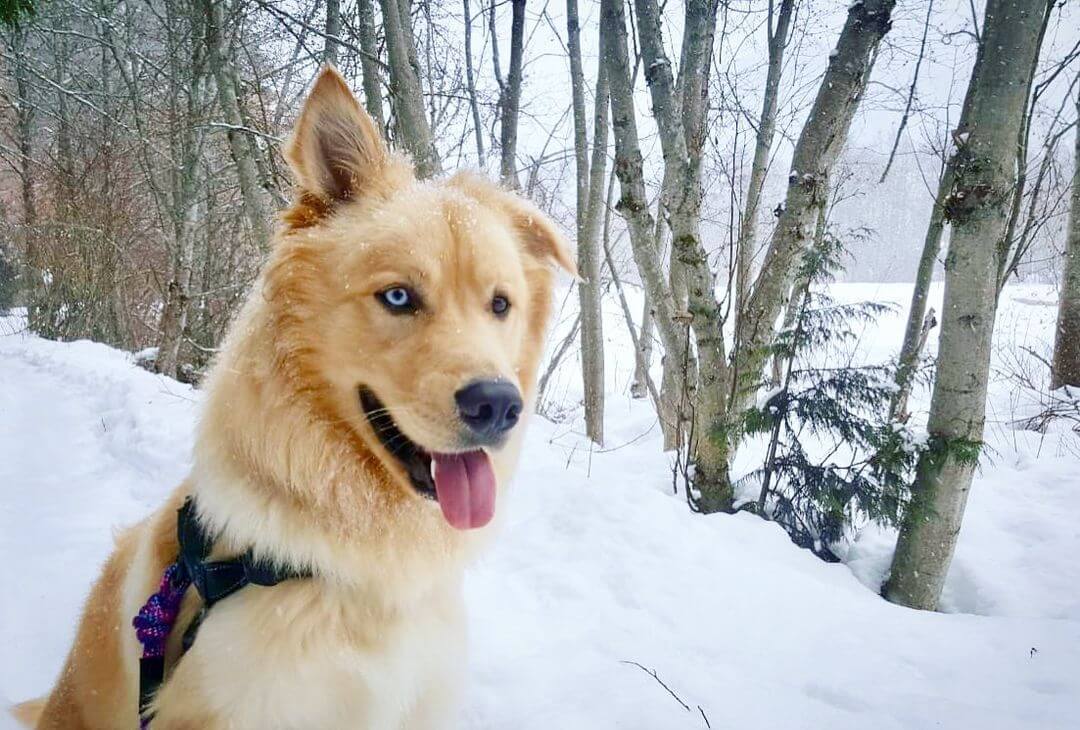 Siberian huskies have a thick coat that keeps them warm and protects them in the frosty north. The bottom layer is soft and dense in cold weather.

Standard colors for Siberian huskies are pure white, as well as white and agouti, black, gray, red, or sable. Other possible custom colors include pure black, brown, or brown, and various combinations of these colors. 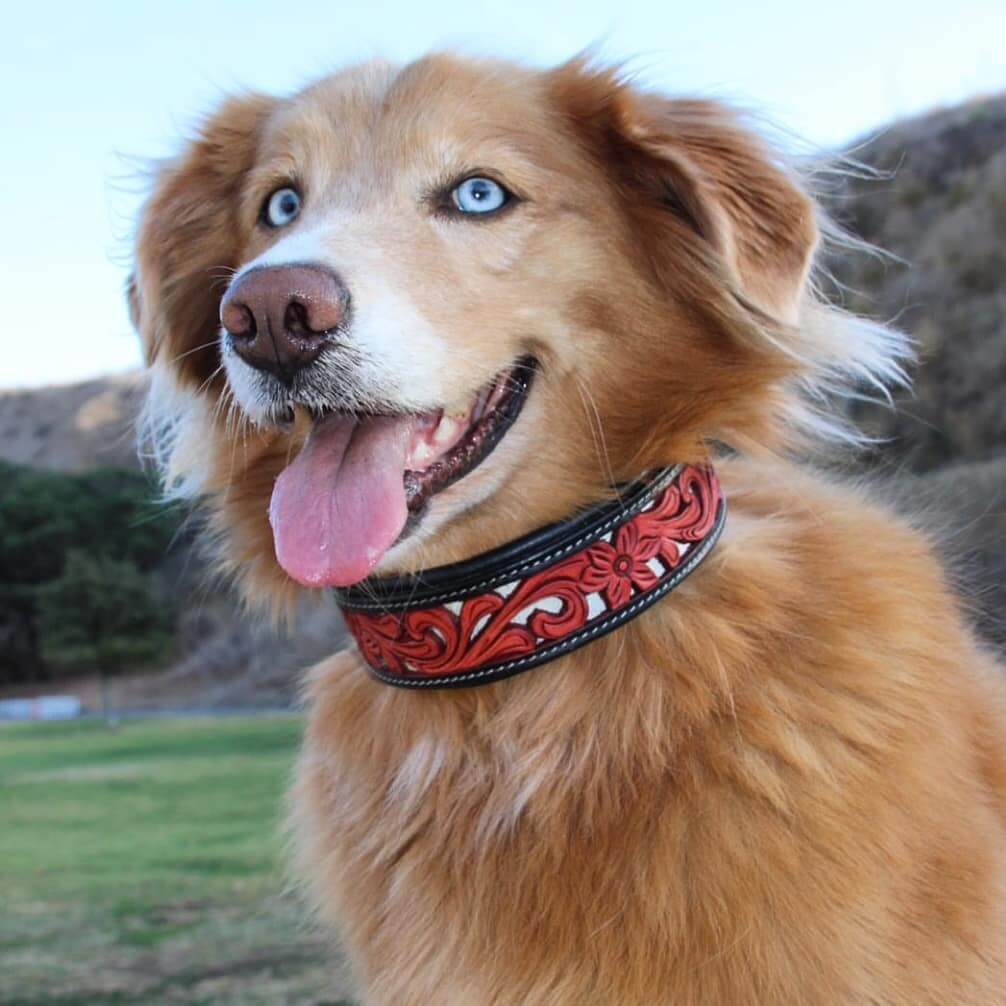 Golden Retrievers can have beautiful blonde, straight or wavy coats. This creates a ruff on the neck as well as on the legs, tail, and lower body.

The breed’s golden color can range from almost white to a darker copper shade, but the feathers are often lighter than the rest of the coat. 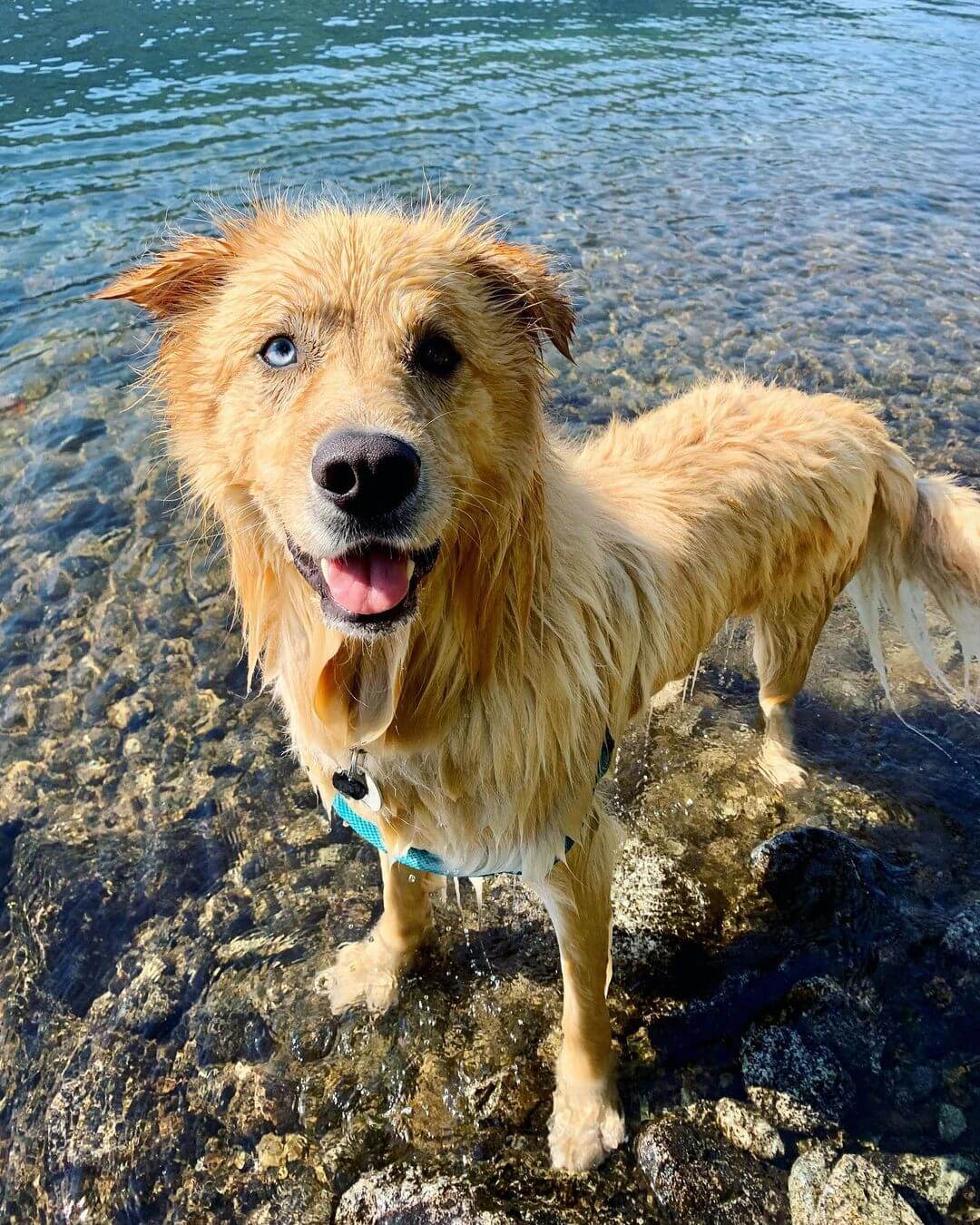 So how do you care for this lovely coat?

Husky and Golden Retrievers only need to be bathed and brushed from time to time several times a week.

Unless he inherits the famous husky coat. Siberian huskies are known for their autumn spring molt. They need to be cleaned daily at this time of year. This also applies to the Siberian Husky Golden Retriever mix that has inherited this trait.

It should also be noted that the husky requires relatively little food for its size. Goldens have a high appetite and can be prone to obesity, which can be dangerous for a husky.

Your veterinarian can tell you how much to feed your Golden Husky. 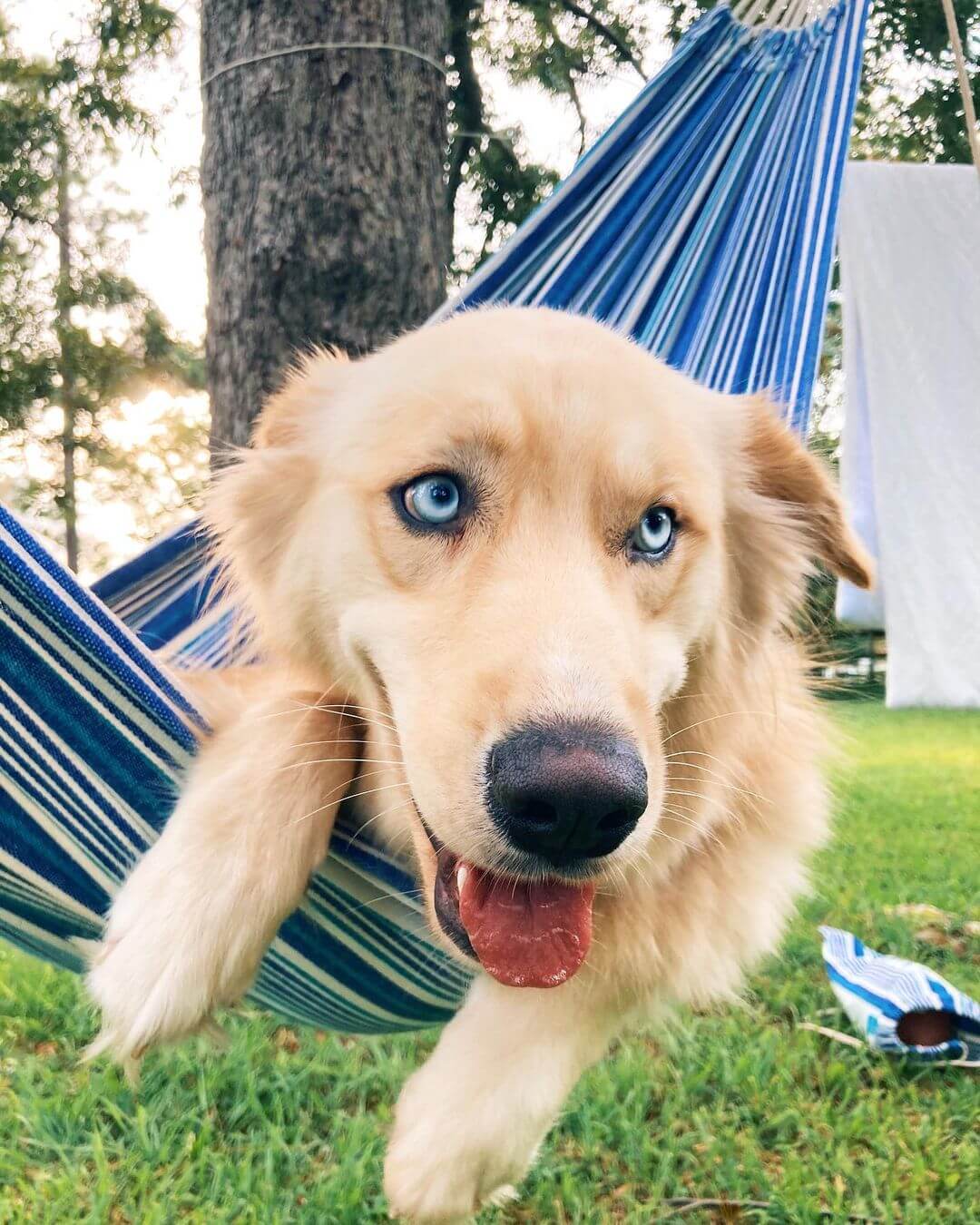 Husky and Golden Retrievers share several traits in common. We can also expect these traits to show up in Golden Husky puppies.

Both the Siberian Husky and the Golden Retriever are sociable and neither breed is prone to aggression. Don’t expect a husky mixed with a golden retriever puppy to make a good watchdog.

A mix of golden and husky tends to require supervision when it comes to small animals. However, they get along well with children and other dogs.

The Golden Husky blend is too social to be left alone for long. 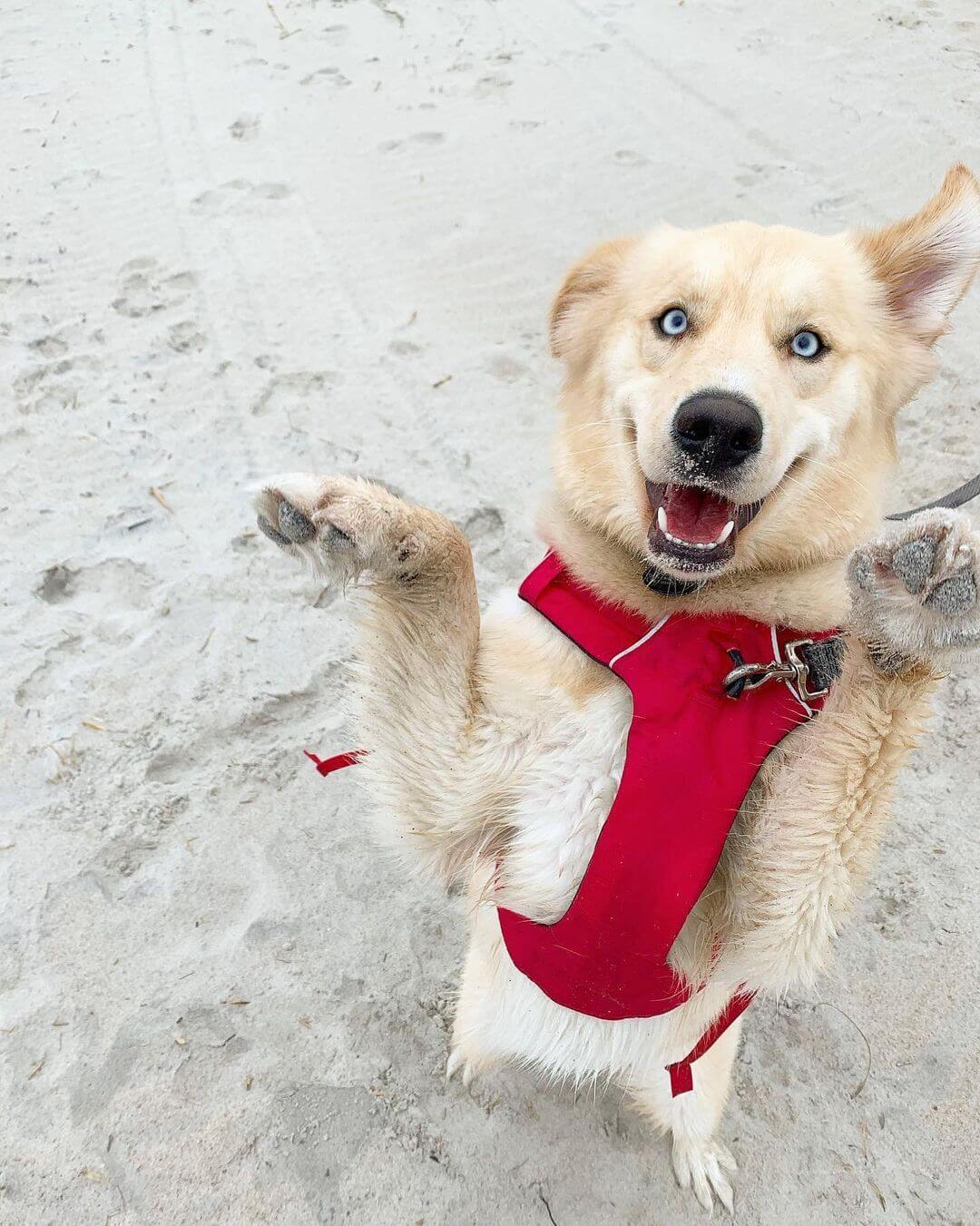 Mixes of golden retrievers with huskies require a lot of exercises.

Huskies are bred for endurance running. Goldens were bred to help hunters and enjoy long walks and outdoor games.

Fetch is a great way to train your Golden Husky mix, especially if you can play in a fenced yard or dog park so the dog can run more freely. The Golden Husky blend will also be a good companion for runners and hikers.

However, avoid exercising in hot weather to keep your dog from overheating.

Of course, proper exercise can help prevent bad behavior, but basic obedience training is the key to making sure every dog ​​feels good. How can a Siberian Husky, Golden Retriever, or dog know what is expected of them if the owner doesn’t take the time to show off?

Fortunately, both the husky and the golden retriever are smart dogs. Indeed, your Golden Mix Husky will be delighted to have the opportunity to please you! 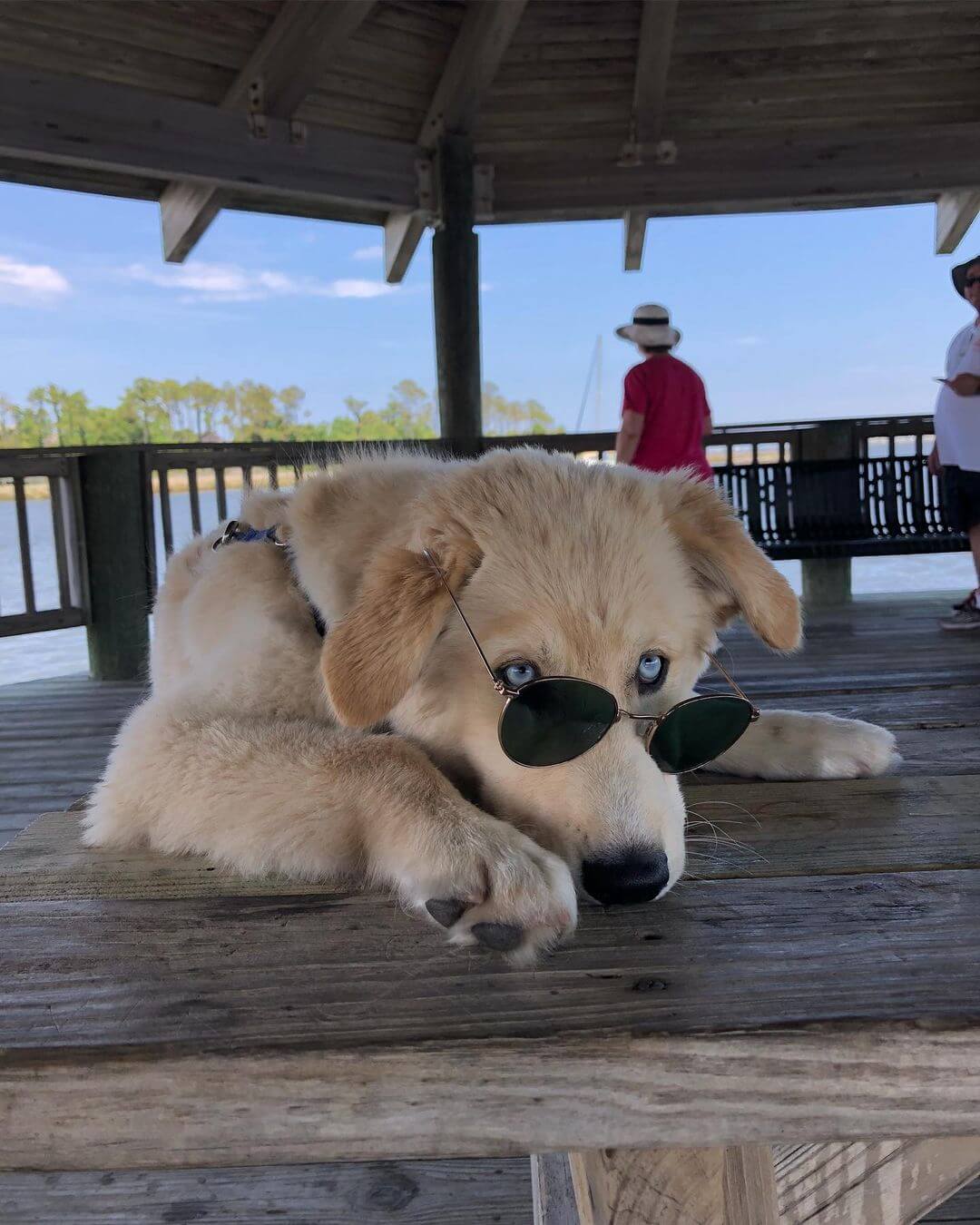 Although mixed breeds are healthier than purebreds, health problems can arise.

According to a survey conducted by the Golden Retriever Club of America (GRCA), the most common health problems facing golden retrievers are hot spots, neoplasms (cancer), and allergies.

Hot spots are often the result of the dog biting, licking, and scratching due to some other medical problem or poor grooming. These are prevented and controlled through regular care and treatment of the underlying condition.

Fleas are the most common allergen to golden retrievers. Flea allergies are best dealt with “with the regular use of flea pr>. All dog owners should use these as a standard to help prevent the diseases caused by fleas and other parasites.

In general, allergies are “treated” by avoiding the allergen whenever possible and using various medications.

Other serious conditions include hip dysplasia and hypothyroidism.

H% C3% BCft joint dysplasia ”refers to an improperly formed hand is one of the diseases in dogs. the innate is demonstrated by r. it can be managed with medication lifestyle.>

Hypothyroidism “is the underproduction of hormones by thyroid gland this can lead to skin irritation, hair loss, and other coat problems, infections decreased activity and weight gain>

Hypothyroidism is caused by inflammation or shrinkage of the thyroid gland or, very rarely, thyroid cancer. It can be detected by a blood test and is treated with oral hormone replacement.

Epilepsy is a genetic disorder characterized by recurring seizures without a specific cause. The right medication can control seizures.

Owners of dogs with epilepsy should discuss with their veterinarians how to respond to seizures. This can prevent the dog from hurting itself or another person.

Cryptorchidism “is the innate developmental defect in dogs. according to the Siberian husky club of America, percent of m huskies are affected.>

Cryptorchidism is the retention of one or both testicles. This can lead to malignant growths or torsion of the spermatic cords in the affected testicle or testicle.

These conditions can be very painful for the affected man and have a negative impact on fertility. The SHCA recommends not to breed the affected males.

Hip dysplasia can also occur, although it is very rare. According to the “orthopedic foundation for animals> (OFA), this is around 2% of Siberian huskies.

As you can see, the general health conditions of the Siberian Husky and Golden Retrievers are practically not the same.

This is good for Siberian Husky / Golden Retriever mixes because, with the exception of hypothyroidism, they are less likely to inherit a specific health problem.

The other side is the greater number of hereditary health problems. Hypothyroidism, in particular, is a potential problem with Siberian Husky / Golden Retriever mixes.

The Golden Husky mix can live on average between 11 and 14 years. 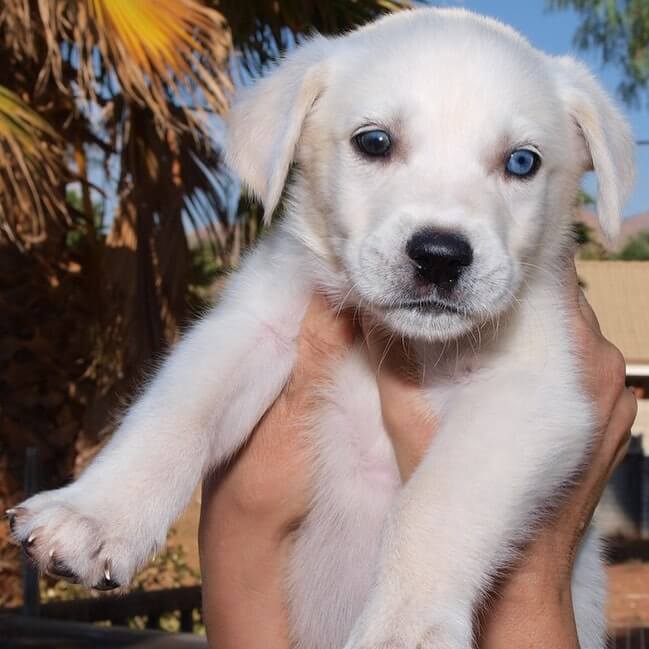 Of course, choosing a healthy Siberian Husky and Golden Retriever puppy is important. How do you know if a breeder’s puppies are healthy?

A reputable breeder will undergo veterinary screening and DNA screening to ensure their puppies are healthy. Both parents must be OFA certified.

You should also make sure that the breeder is breeding the dogs in a happy and healthy environment. You should be able to get to know your mother and if you have one, your father.

Parents and all littermates should look happy and healthy. The mother should be either a pet or a service dog, and not just serve as a mother.