The basic equipment of your rodent home consists, among other things, of a feeding and drinking bowl (or a drinking bottle). A drinking bowl has the advantage that your guinea pigs – unlike a nipple drinker – can adopt a natural posture. It’s also easier to clean than a water bottle.

However, the bowls should be as heavy as possible (e.g. made of glazed clay) and low (up to approx. 5 cm high). Since guinea pigs always need clean hay to freely dispose of, it is advisable to add a hay rack to the enclosure. Wire racks are best attached outside the cage or closed with a board from above. 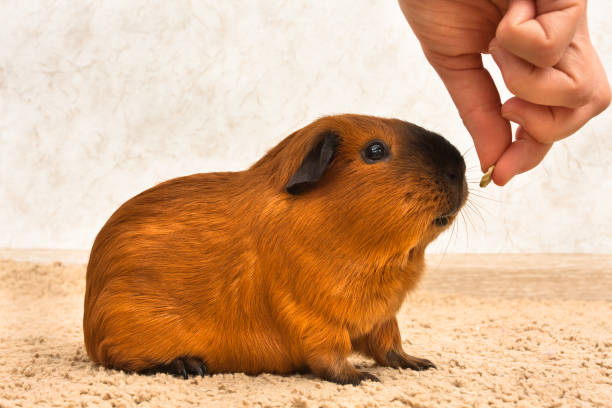 In this way, you prevent your guinea pigs from jumping into the hay rack and seriously injuring themselves. An alternative is self-made wooden hay racks, which are made, for example, from a solid base plate, untreated wooden sticks, and a lid. But you can also use a brick with holes, into which you stick branches (with leaves) and spread hay between them. Guinea pigs also like to eat the hay directly from the ground. Please make sure that the hay is not soiled by feces and urine and that it is not changed more frequently.

Because guinea pigs retreat into burrows when threatened and to rest, they need multiple shelter options. It is important that the hiding places are not too small (several animals should be able to lie in them at the same time) and always have at least two entrances and exits. Houses that are open on three or four sides (like a small table) are best. If a cave has only one entrance, the animals cannot escape if another group member blocks the exit.

A wooden house should be at least 40 x 30 cm and have a flat roof (= viewing platform for the animals). Houses with windows are not suitable as they are a source of danger. If the rodents try to jump through one of the windows, they can very easily get stuck and seriously injure themselves. Cork tubes, willow bridges, hollow tree trunks, and ceramic tubes are also suitable. However, the pipes must have a minimum diameter of 15 cm and should be relatively easy to clean (i.e. not too long). 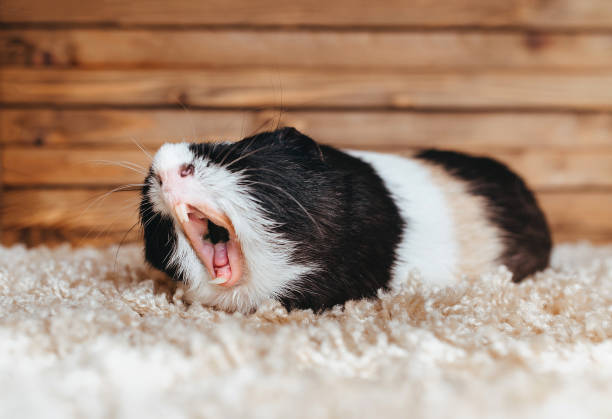 Many types of litter are available in specialist shops, such as hemp litter, straw pellets, beech granules, flax litter, and small animal litter made from wood chips. In any case, the litter should be untreated (also unperfumed) and as dust-free as possible. Pelleted litter types have the strongest suction power, but are usually too hard and sharp-edged for the sensitive feet of rodents. They can be used for the urine corners if necessary. It is better to use small animal litter made of wood shavings for the running surface of the enclosure.

You should litter the enclosure about 5 cm thick and put a layer of straw on top. Straw and hay alone are not sufficient as bedding as they do not absorb liquid. As the upper layer, however, they have the advantage that less litter gets caught in the fur (especially with long-haired animals). Cat litter is generally not suitable as litter, as it is often eaten up and then leads to serious health problems.