Large Munsterlanders are versatile and intelligent hunting dogs with a great will to work and a fondness for the water. Busy and challenged, they also enrich families with their patient, open-minded nature. A prerequisite for a fulfilled dog living in the family circle is a meaningful occupation such as regular dog sport. 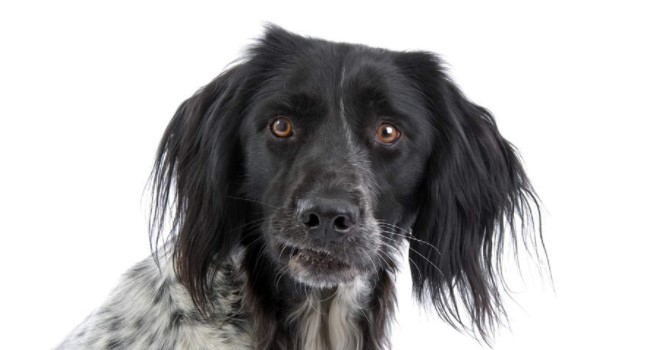 Descendant of the German Bird and Hawk dogs

Experts believe that the hawk and bird hounds in paintings in the 16th and 17th centuries in the Netherlands are some of the distant ancestors of today’s hunting dogs. The black and white Large Munsterlander is otherwise derived from the German long-haired pointer, which at that time still existed in brown and black color variations. In 1878, however, the experts settled on brown and white breed characteristics. This excluded the black colors from breeding.

The Large Munsterlander almost went extinct back then. However, in the area around the German city of Munster, the black and black-and-white hunting assistants were particularly prized. Therefore, enthusiasts founded a breeding club in 1919 and continued to breed the popular four-legged friend. It was recognized as a dog breed in 1922 and is now known as the Large Munsterlander Pointer.

These coat colors are particularly common:

There are also brown and brown-white animals from time to time. However, they are excluded from breeding.

Nature of the Large Munsterlander

The Large Munsterlander has a strong will to please. As a result, he learns and understands relatively quickly and is generally considered to be relatively easy to train. Due to its great work zeal, the Large Munsterlander is a persistent and reliable companion for hunting. It can be used in many ways and is suitable for work before and after the shot in the field, forest, and in the water.

Training of the Large Munsterlander

The Large Munsterlander has a strong will to please. As a result, he learns and understands relatively quickly and is generally considered to be relatively easy to train. Due to its great work zeal, the Large Munsterlander is a persistent and reliable companion for hunting. It can be used in many ways and is suitable for work before and after the shot in the field, forest, and in the water. 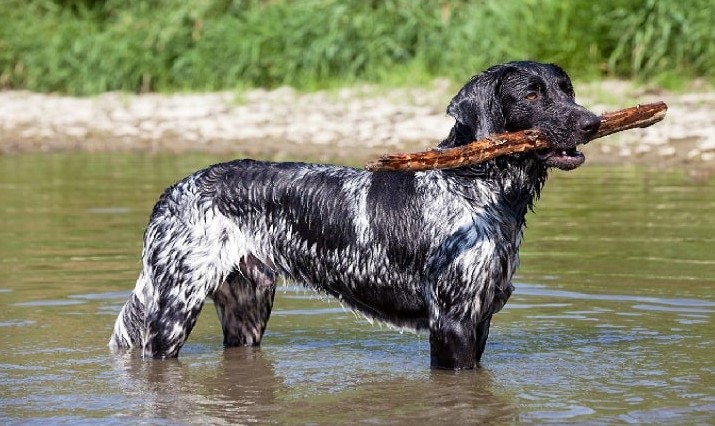 The Large Munsterlander is only conditionally recommended as a family dog ​​due to its great urge to move and the pronounced hunting instinct. For a harmonious coexistence, the four-legged friend needs a serious task that challenges and exhausts him in addition to daily walks, games, and romping in the garden. It is an excellent companion for daily workouts such as jogging or cycling. We also recommend a dog sport that corresponds to its natural inclinations and curbs the hunting instinct. These include above all:

Another suitable field of activity for owners of the Large Munsterlander is in the training of assistance dogs and in the search and rescue service.

If you can offer him this balance, the Large Munsterlander will reward you with loyalty and faithfulness. The docile animal is a lively and well-balanced companion. He is a sporty playmate for children who like to play on and in the water and appreciates a long game of dog frisbee and other fetch games.

Care of the Large Munsterlander

The Large Munsterlander has a thick, long coat that gives it excellent protection from thorns and twigs when it is rummaging through the undergrowth in search of tracks. Its coat is relatively easy to care for: daily brushing is sufficient.

Dog fans should pay particular attention to the pointing dog’s floppy ears. Their shape and the long fur on them allow little air into the ear, which easily leads to inflammation and parasite infestation. Regular ear care and checks prevent these problems.

The hardy hunting dog has an average life expectancy of twelve to 14 years. Due to the small, responsible breed, there are hardly any hereditary diseases that are typical for the Large Munsterlander. Occasionally there is dysplasia of the joints. In addition, a roll lid (entropion) can occur due to misalignment of the eyelid.

Furthermore, this breed is easy to feed and utilizes feed very well. Therefore, the Large Munsterlander tends to be overweight. Owners should therefore regularly check the weight of their four-legged friend and adjust the amount of food if necessary. Basically, when choosing dog food, pay attention to high-protein, high-quality food that corresponds to the dog’s age.

Peculiarities of the Large Munsterlander

Large Munsterlanders are hunting dogs through and through. They really thrive in this area and are ready to put in top performance for hours on end. In pure housing and without tasks, this dog breed withers away. Under certain circumstances, this becomes noticeable through a change in personality and/or behavioral problems. Therefore, before you buy, consider whether you can really offer this breed a species-appropriate, fulfilling dog life.