Parson Terriers, Jack Russell Terriers, and the AKC-recognized Russell Terriers 2012 are three different dog breeds that trace back to an English pastor and his hunting dogs. To this day, the dog breeds are similar in many respects and are almost exclusively differentiated in terms of their size and temperament. You can find out which type suits you in an overview of the bright terriers.

The Appearance of Parson, Jack Russell, and Russell Terriers

The three variations of the original Jack Russell Terrier are almost indistinguishable for laypeople. All three breeds are relatively small and well suited to hunting small game. The texture of the coat is slightly different from dog to dog – in general, the dogs wear short to medium-length topcoats with a dense undercoat. The trimming hair must be regularly cared for and freed from superfluous wool.

Size and weight of the Russell, Jack Russell, and Parson Russell Terrier

What is the difference between the three Russell Terrier variants?

Externally, the long-legged Parson Russell Terrier is most easily distinguished from the other variations. The dogs were bred for shows and as companion dogs and appear a bit more graceful than their athletic counterparts; in addition, the lower abdominal line is rather straight. They have fairly short legs and a tucked-up belly line and can be distinguished mainly by their size.

The terriers from head to tail

The short to medium-length coat can be smooth and soft, similar to that of the dachshund, or noticeably rough. It is important that the fur is two-layered and keeps moisture and cold out. Every dog ​​has small peculiarities in the color of its coat: The basic color of all Russell breeds is white with dark spots. The piebald can range from light brown or beige to black.

The Origin of the Russell Terrier Types: Who Was This Jack Russell?

Reverend John “Jack” Russell lived in Devon, England, in the 19th century – in addition to church work, he devoted his life to hunting. He crossed various short-legged terriers and first created the white Jack Russell Terrier, which was more distinguishable from wild animals when hunting than its brown or black predecessors. According to various sources, the puppies of a small terrier named Trump are direct ancestors of modern breed lines.

Characteristics of the breeding dogs from John Russell at a glance

The Origin of the Parson Russell and the Russell Terrier

Various types of English Fox Terriers can be traced back to the breeding efforts of the Reverend John Russell, among others. Until the introduction of the breed of the same name with a distinctive mustache, the term Fox Terrier was used to describe terriers with different coat structures and colors that were suitable for hunting hares, foxes, otters, weasels, and badgers. The Parson Terrier evolved just a few years after the Jack Russell Terrier and represented the long-legged variant of the breed (modeled after the Fell Terrier of northern England) – Parson Terriers are better suited to hunting in hilly terrain. The short-legged Russells are bred in the United States as pure companion dogs.

How did the Mini Russell Terrier come about? 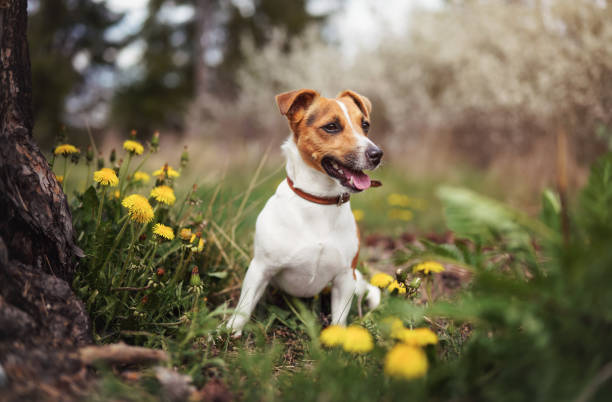 Russell Terriers evolved from imported Jack Russell Terriers in Australia in the 20th century. Small ones were preferred to larger specimens in the outback, as they followed small animals even in dense bushes and in narrow burrows.

Nature and Character of the Terrier: The Smaller, the Wilder?

The character descriptions for Parson and Jack Russell Terriers overlap in most points. In the south of England Parsons were bred more as companion dogs and used short-legged Jack Russels for hunting, in the north Parsons were favored for hunting as they can more easily keep an eye on the game and track it over rough terrain. Like all terriers, the Parson Russells and Jack Russells are alert and fat, with an almost untamable will to hunt and work.