The miniature pinscher, with his spectacular aristocrat appearance, is a bright personality. Frisky, impetuous, cheerful, prone to inventions and tricks, he knows how to brighten up everyday life and does not let anyone get bored. However, his violent energy does not overshadow the powers of reason: he is not one of those who recklessly enter a cage with a tiger – if a dog wants to annoy an opponent who is physically superior to him, it will certainly invent some sophisticated method and achieve its goal. If he has to submit, he will do so with unmatched dignity, while maintaining fantastic self-esteem. 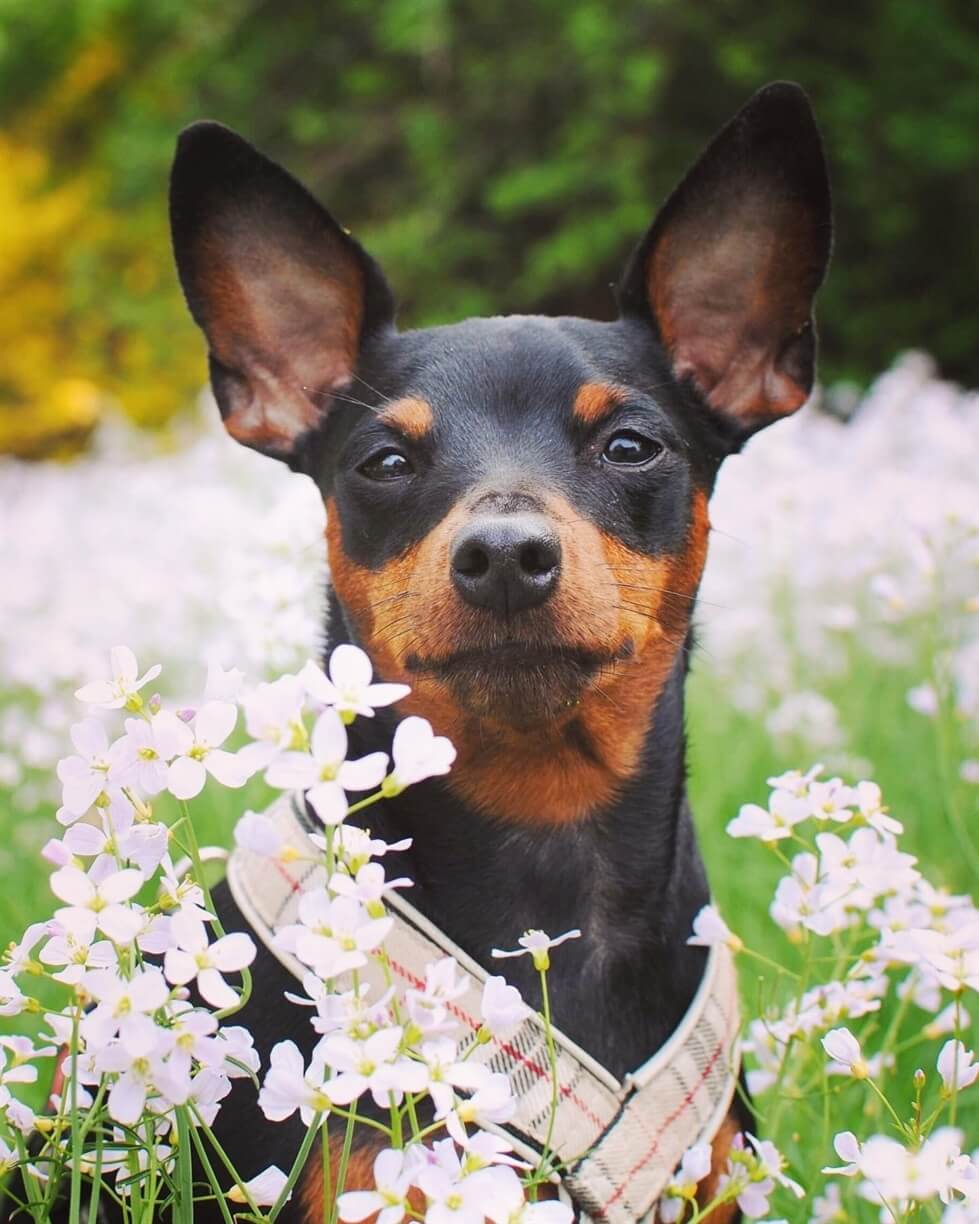 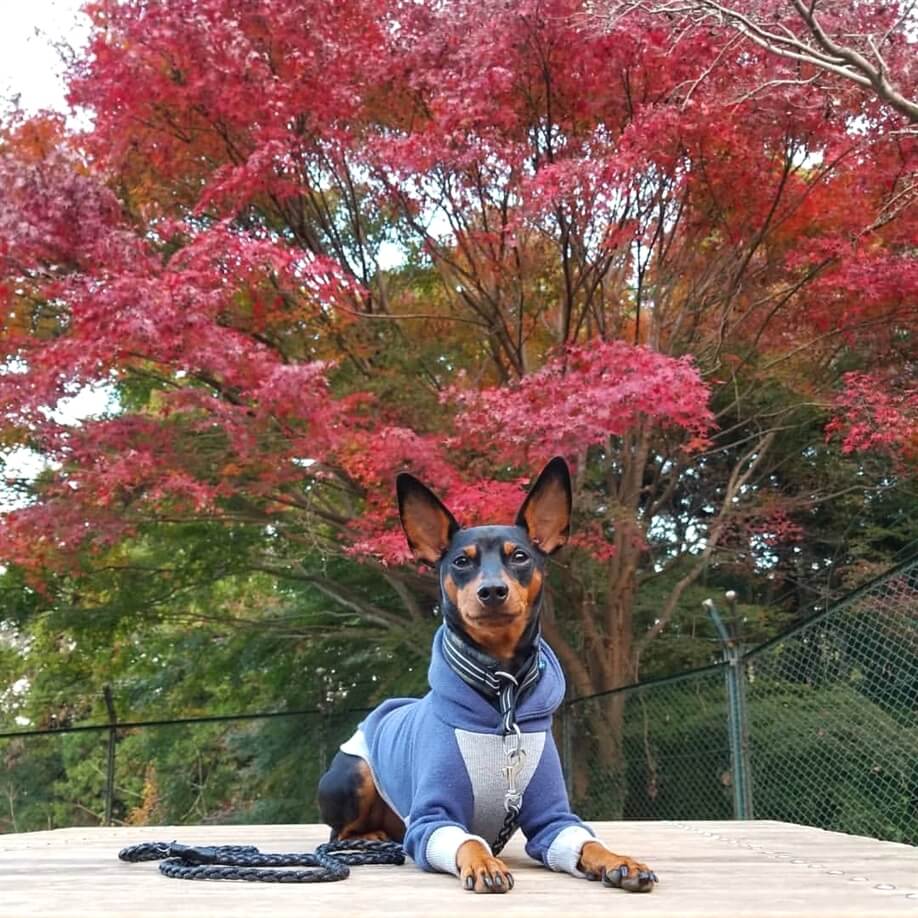 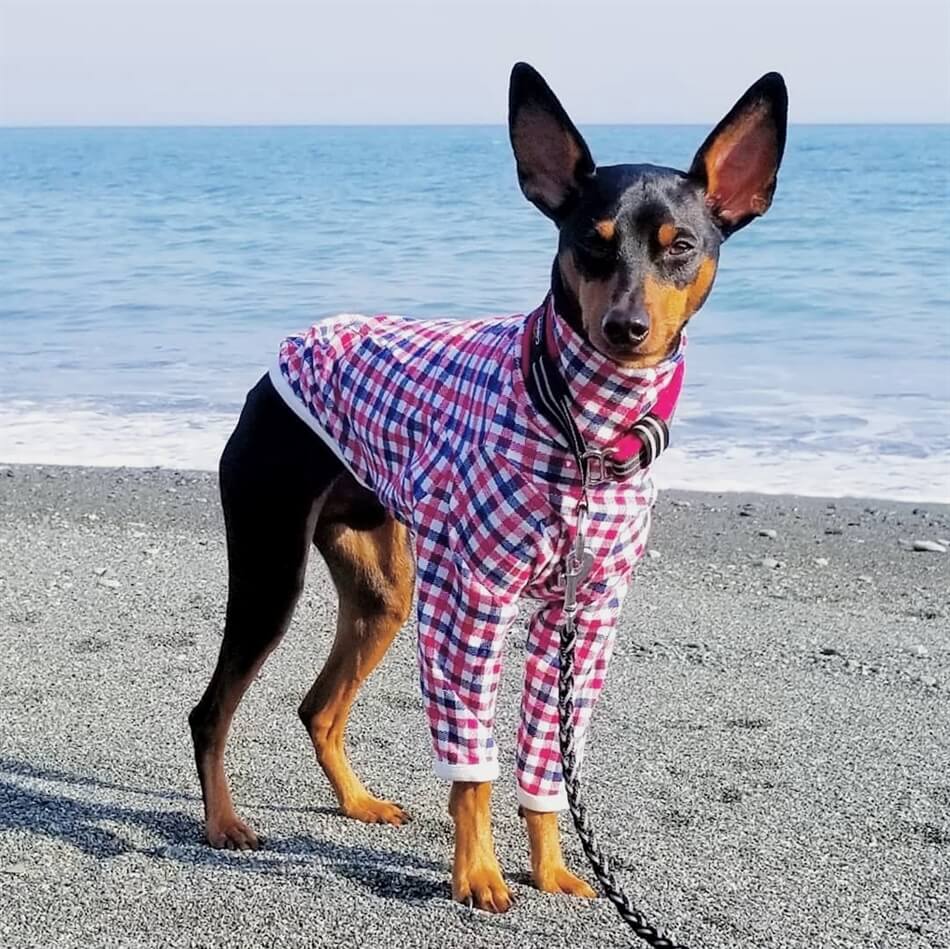 The Miniature Pinscher, also known as the Miniature Pinscher or Miniature Pinscher, is a breed that began to form at least two centuries ago in Germany. Experts do not doubt the fact that the dominant role in the breeding of the breed belonged to the short-haired German pinscher – dogs known in Europe since the Middle Ages. They were famous for their unpretentious content and their versatility: they served as watchmen on farms, were famous as excellent hunters and dexterous rodent exterminators. In addition to the German pinschers, among the distant ancestors of the miniature pinschers are also called dachshunds and Italian greyhounds – the smallest dogs of their group of greyhounds.

It is known that at the beginning of the 19th century, the growth of a standard pinscher ranged from 45 to 50 cm at the withers, and their miniature varieties, which were already called dwarf smooth-haired pinschers in 1936, were characterized by growth from 35 to 40 cm.

In the second half of the 19th century, targeted breeding of pinschers began, and in 1880 the first official breed standard appeared, developed by the German dog handler Richard Strebel. Five years later, the German breeder Joseph Bertha founded the Pinscher Club, under the auspices of which the Pinscher, different in appearance, was divided into separate breeds.

Miniature Pinschers were first shown at the Stuttgart Dog Show in Germany in 1900. At that time, outside of their homeland, these dogs, nicknamed for their small stature the miniature pinschers (“zwerg” in translation from German – “dwarf”), were practically unknown. However, over time, the breed began to gain popularity both throughout Europe and overseas. In 1905, the first Miniature Pinscher was registered in the French Studbook. True, he was characterized as a German smooth-haired terrier. In the USA, where the Miniature Pinscher began to be imported after the First World War, the breed was also originally included in the Terrier category. In 1929, when the American Kennel Club (AKC) officially approved the Pinscher breed, the Miniature Pinscher Club was created, whose members petitioned for the AKC to assign the smallest species to the Pinscher (Toy) group. In 1972, this name was changed to “Miniature Pinscher”.

Nowadays, this small but brave dog has a lot of fans in all parts of the world. In various countries, in everyday life and when selling it, it is often called differently, however, since 1955, in the classification of breeds of the International Cynological Organization (FCI), the smallest representative of pinschers is called a miniature pinscher. 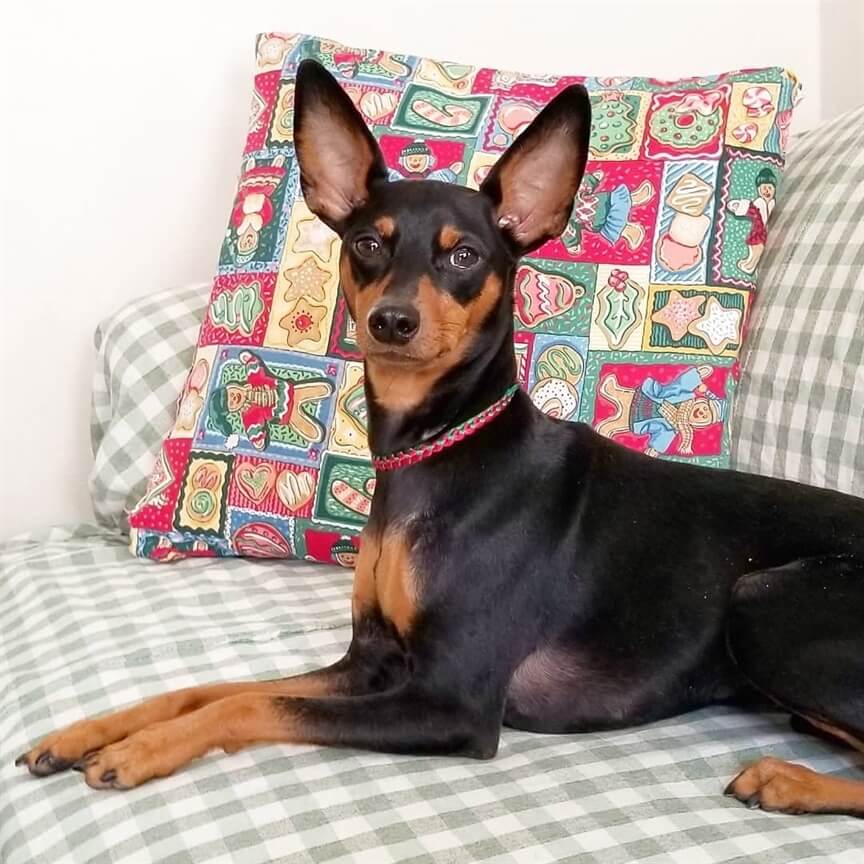 Today, at international exhibitions, you can see miniature pinschers belonging to different intra-breed types. This is due to the fact that the breeding of these dogs in many countries is based on their own traditions in the selection of this breed. So, dogs bred in the USA, Great Britain, Canada are characterized by a special, graceful manner of movement. Miniature Pinschers from Israel are distinguished by almost absolute external similarity with miniature Dobermans, they are characterized by confident wide, sweeping movements. German aborigines can always be recognized due to their stockiness and muscularity, and representatives of Scandinavia are the most balanced, calm, and confident individuals. However, for all miniature pinschers, there are rigid growth boundaries (25-30 cm), colors, a certain structure of the body. 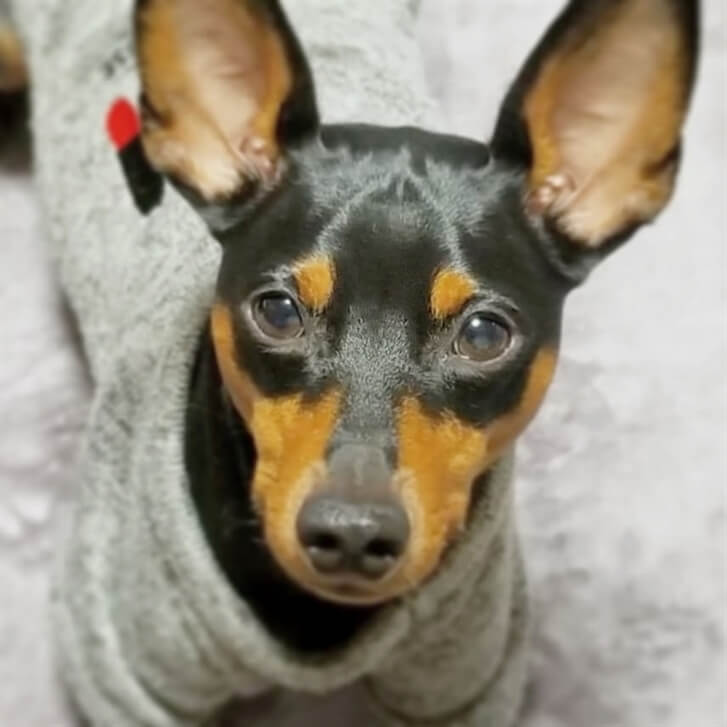 The Miniature Pinscher is not at all worried about his small size – he is so self-confident and courageous. Incredible aplomb and energy, combined with intelligence and cunning, allow this baby to become a key participant in all events that take place around – at home, on the street, at an exhibition, that is, everywhere.

He shows his love and devotion to the owner of the miniature pinscher very emotionally, while he prefers to feel on an equal footing with him. This dog needs a “firm hand”, otherwise it will certainly show an innate passion for domination and manipulation. If this cunning irrepressible imp realizes that, assuming a plaintive look, he can get whatever he wants, then there will be no limit to his extravagance. This dog will demonstrate the desire to occupy the highest possible position at every opportunity, both in relations with people and in communicating with its fellow tribesmen, even the largest of them. To avoid problems, the miniature pinscher should be taken for a walk on a leash.

The dog is aggressive towards small animals, especially rodents, birds, he does not like cats either. Peaceful coexistence between miniature pinschers and representatives of the feline family is possible only if the pets were brought up together from a tender age.

Incredibly agile, with excellent grip, strong teeth, and lightning-fast reaction, the miniature pinscher feels like a family protector and watchman. If someone decides to harm its owners, the dog will rush at a potential enemy before he has time to carry out his plan. At the same time, the miniature pinscher’s nervous system is strong, and his courage is not reckless – he always soberly evaluates the situation and his strengths.

The Miniature Pinscher is constantly overwhelmed with a thirst for activity, he is incredibly curious, resourceful, observant, and, as a detective, is always ready to investigate. If the dog wants to commit a certain undertaking, then he will find a way to escape from anywhere, in an unimaginable way overcoming all obstacles. He can easily climb onto the table, windowsill, crawl into the narrowest gap. His tricks are striking in their creativity, and the ability to perform various dizzying stunts suggests that the role of a clown is clearly to his liking: laughter and attention of households for him is a true reward. 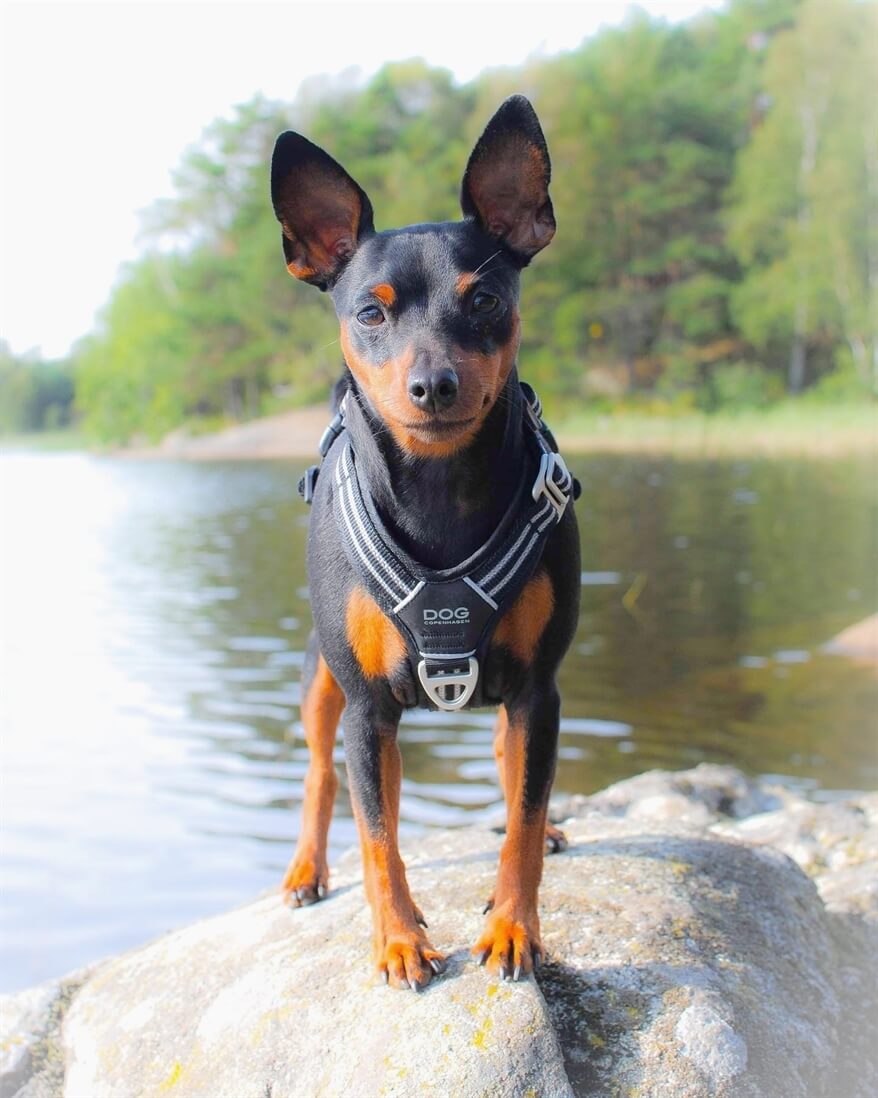 Endowed with intelligence and quick-wittedness, the Miniature Pinscher lends itself well to training. However, the owner should take the upbringing of the pet very seriously, given the characteristic features of this breed: the dog will not miss the opportunity to quietly establish its own control over the training process if the owner makes even the slightest mistake. The manifestation of excessive love and forgiveness when raising a miniature pinscher is unacceptable, just like rudeness.

The training methodology should be based on the principles of consistency and repetition, so teaching the Miniature Pinscher discipline, obedience and good manners take longer than working with most other breeds. The dog must understand that the owner is calm, self-confident, and firm in his intention to accustom him to order – in this case, with the zeal of a true careerist, he will demonstrate his readiness to serve and obey commands.

The miniature pinscher with amazing dexterity and speed masters shells on the training ground, and it is not difficult for him to overcome an obstacle five times larger than his height from the spot. These abilities, combined with excellent maneuverability, make the Zwerg Pinscher one of the best breeds to showcase outstanding agility. 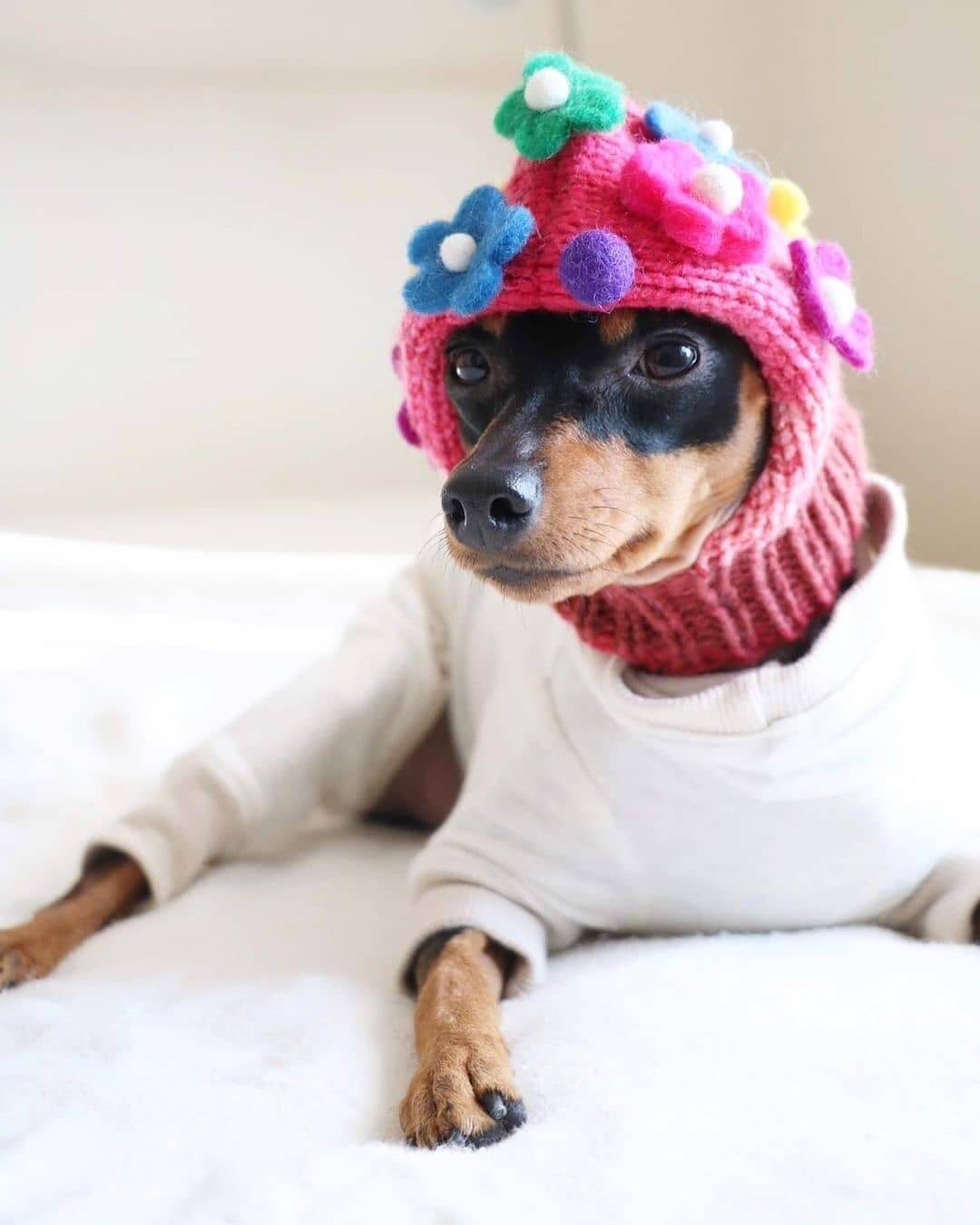 The Miniature Pinscher is a companion dog, so he certainly must live under the same roof with his owner, keeping an animal in an aviary is absolutely unacceptable. The dog himself will feel great both in a city apartment, even a small one, and in a country house: he will always figure out what to do with himself, and he will not be bored. The owners of the miniature pinscher should understand that their irrepressible pet should be able to realize its activity. Otherwise, his energy will take on destructive forms, and you can forget about the calm atmosphere in the house. The “city dweller” dog needs to be walked at least three times a day, and it is desirable that he has the opportunity to frolic without a leash in some suitable place.

When walking a miniature pinscher in bad weather, the owner must take into account some points. Frosts, for example, are not terrible for this short-haired dog, but on the condition that it is constantly in motion. But if during a walk the dog is caught by cold rain or sleet, you need to take it in your arms, cover it with something you have to, take it home, and dry it thoroughly, otherwise, it may not only catch a cold but also get kidney and genital diseases. Caring owners usually purchase seasonal clothing for their miniature pets – waterproof and windproof overalls.

Despite the fact that Miniature Pinschers shed periodically, caring for their fur will not become burdensome. It is enough once a week to prophylactically comb out the dog with a special soft brush for smooth-haired dogs; it will also be useful to periodically wipe its coat with a damp natural cloth. You can arrange a general washing for your pet if it gets pretty dirty in its adventures.

Two or three times a week, the dog needs to brush its teeth, claws are trimmed once or twice a month.

The appetite of the miniature pinscher is quite moderate, but in the cold winter season, the dog, as a rule, begins to show a remarkable interest in food, since it needs more energy. During this period, many dogs gain excess weight, which is highly undesirable. Owners should not change their pet’s usual diet, but adding foods with a high protein content to it will be quite appropriate.

An adult Miniature Pinscher should be fed twice a day, preferably at the same time. If you prefer to buy natural products for your pet, keep in mind that at least 40% of their volume should be meat. Choose beef and horse meat, poultry is more suitable for puppies. It is advisable to combine meat products with cereals: oats, millet, buckwheat. Make sure there is always water in the dog’s bowl. Don’t forget about plant foods. You can steam vegetables and make a salad with low-fat sour cream or sunflower oil. 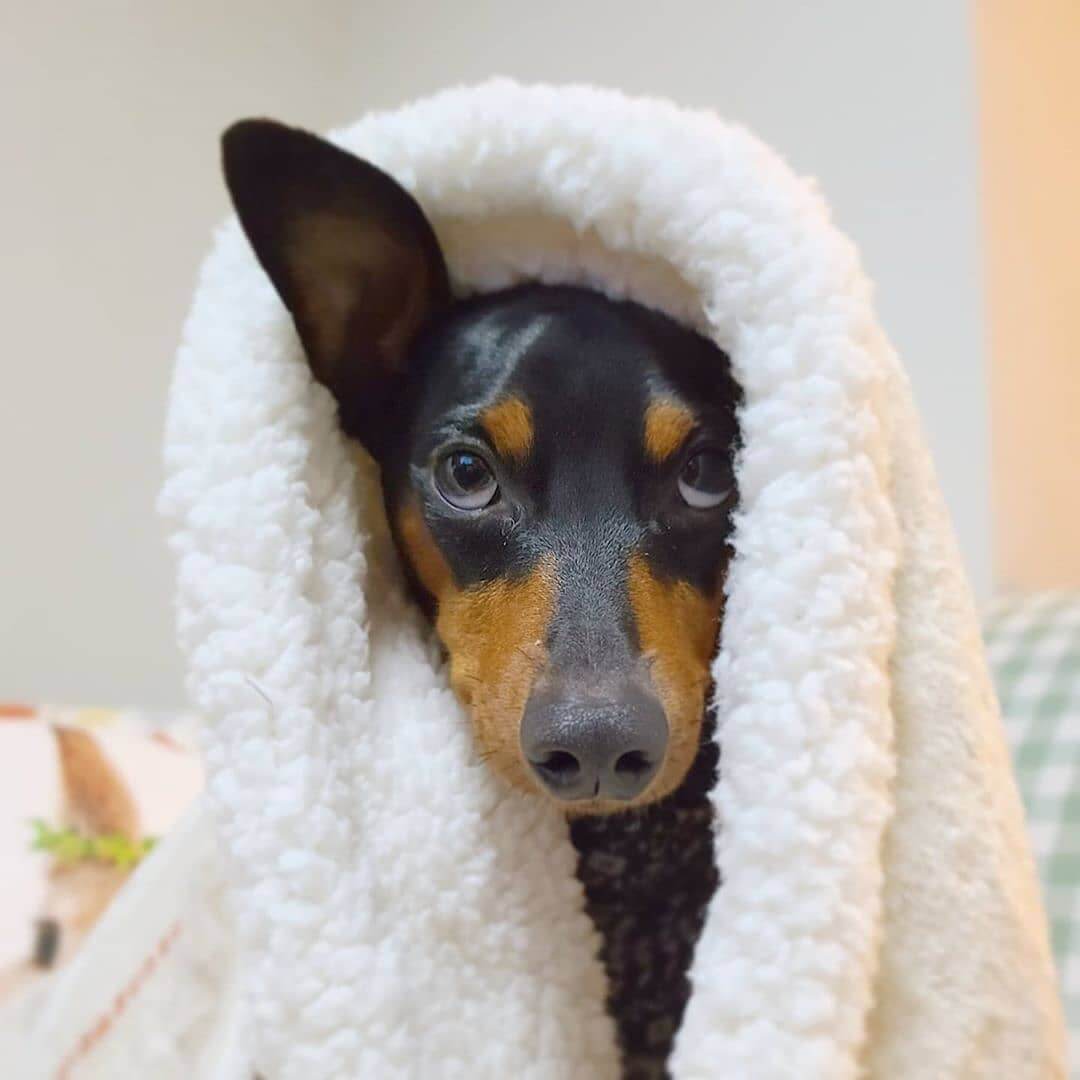 Miniature Pinschers are distinguished by good health, but this breed still has a tendency to some diseases. Among them: 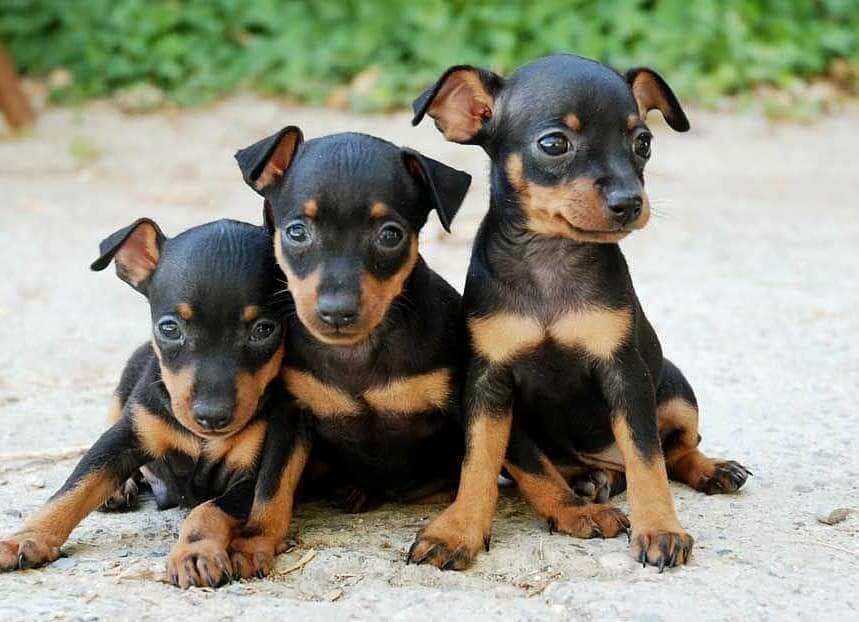 When choosing a baby, pay attention to how all puppies from the same litter behave, how they play with each other, how their mother treats them. Take a closer look at the bitch: a sleek, healthy, attentive mother and children are appropriate, and if she is sad, emaciated, has a sickly appearance, then her little ones are likely to be weakened. Observe the feeding of the puppies: healthy dogs show excellent appetite. Among a fun company of brothers and sisters, choose an active, but not aggressive, strong man, he should be curious and ready to communicate with you.

You should check the bite of a miniature pinscher baby, assess the condition of his teeth, the cleanliness of his eyes, make sure that the dog has clean ears without secretions that exude an unpleasant odor. The coat of your chosen one should be beautiful, smooth, shiny, without bald spots and dandruff. Light scratches on the puppy’s body should not scare you – most likely, these are the consequences of games, because miniature pinschers demonstrate their temperament from a very tender age.