Being overweight can have serious health consequences. Read here how your dog can lose excess pounds in a healthy way.

Since the four-legged family members should not want for anything either, they are often spoiled with treats – unfortunately often in excess. Up to 50 percent of all dogs are overweight or even obese, as confirmed by the Federal Association of Practicing Veterinarians. The health risks associated with being overweight are enormous. That’s why it’s important for dogs to get rid of their excess pounds. One speaks of being overweight when a dog deviates more than ten percent from the ideal weight. If it is 20 percent or more, it is already a disease, which experts call obesity. The best way to test whether a dog is overweight is to determine the so-called Body Condition Score (BCS).

The amount of fat on the dog’s torso is assessed on a scale from 1 to 9. If you run your hand over the dog’s ribs, ideally you should be able to feel them easily. He should also have a waist above the hips and a slightly rising belly line when viewed from the side.

Humans have to start first

If you find it difficult to resist the begging eyes of a dog, think about the negative consequences of being overweight: It puts a strain on the cardiovascular system and the joints. Overweight dogs are short of breath and less efficient. Affected dogs can also get into a diabetic metabolic state more easily.

Dogs don’t have “eating brakes”. Be aware that he will not change his eating habits on his own. You determine his diet.

Don’t just scale down the amount of food

A zero diet is dangerous for dogs: not only the fat reserves but also the muscles are broken down. In addition, such a radical change in diet can cause serious diseases.

Such a radical cure is only successful in the short term. Due to the yo-yo effect, the lost kilos are back on the hips even faster in dogs. The amount of food should not simply be halved. The dog is constantly suffering from hunger. It can also lead to an undersupply of important nutrients.

The right diet for the dog

Calorie-reduced special food is recommended by nutrition experts. The fiber contains swells up in the stomach, giving the dog the feeling of being full. Due to the reduced amount of calories, he still loses weight and receives all the important nutrients.

It is best to work out a customized weight loss program with your veterinarian. He also knows which health weaknesses your dog may have and what you should take into account from a medical point of view. In addition: He can find out whether there is a disease behind obesity.

Ration calculations from the experts

If you cook for your dog yourself, feed it raw or if the dog simply does not lose weight despite various diet attempts, a ration calculation by a veterinarian specializing in nutrition can be useful. The taste preferences of the respective dog can also be taken into account in this way.

Also, watch out for the treats. The little treats are real calorie bombs. To get an overview, you should therefore put one treat on a plate for every treat your dog gets. At the end of the day, you’ll see how many your dog actually ate. Treats should not be completely eliminated when losing weight.

Exercise also helps dogs lose weight. Take into account how overweight your dog is to protect his joints. It is often enough to start out walking a little faster or a few minutes longer when going for a walk.

Swimming can also be a good idea for water-loving dogs as it can burn so many calories.

Step by step to success

Check the diet’s success regularly by weighing your dog weekly. As a rule of thumb, the dog should lose around one to two percent of its body weight in a week. For a dog weighing 20 kilograms, that is an average of 200 to 400 grams.

Don’t lose patience if the fat is slow to disappear. Depending on how much weight your dog has gained, losing weight could take a few months. So don’t lose heart!

The desired weight has been reached 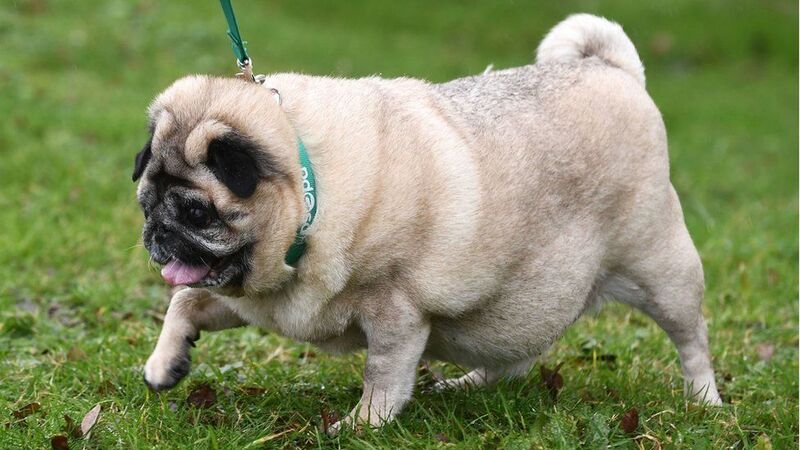 If your dog has lost enough weight, you can continue to feed the diet food or mix it with normal food before your dog switches back to normal food completely. Important: Don’t fall back into the previous pattern now and keep an eye on your dog’s diet.