Pomsky is a half-breed husky who quickly won the love of many dog breeders. These cute little dogs do not leave anyone indifferent. The hybrid inherited the best features of its exterior and character from its progenitors. The Pomsky is a cross between a Husky and a Pomeranian, not recognized by the dog associations and not having the status of an independent breed. 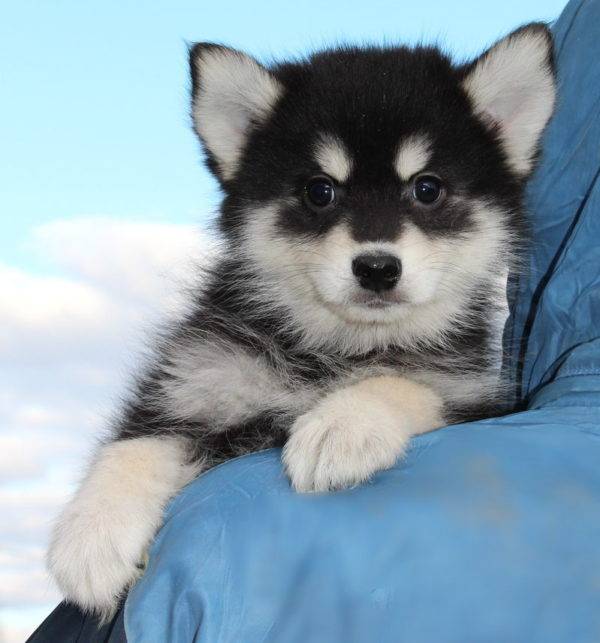 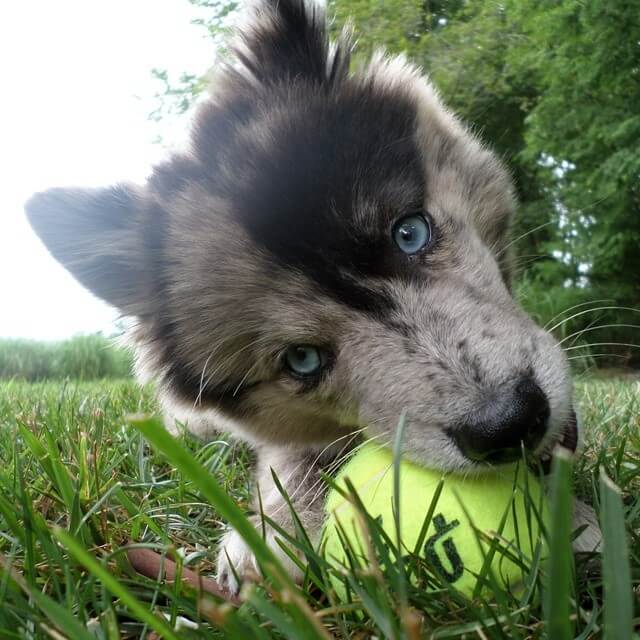 The History of the Appearance of the Pomsky 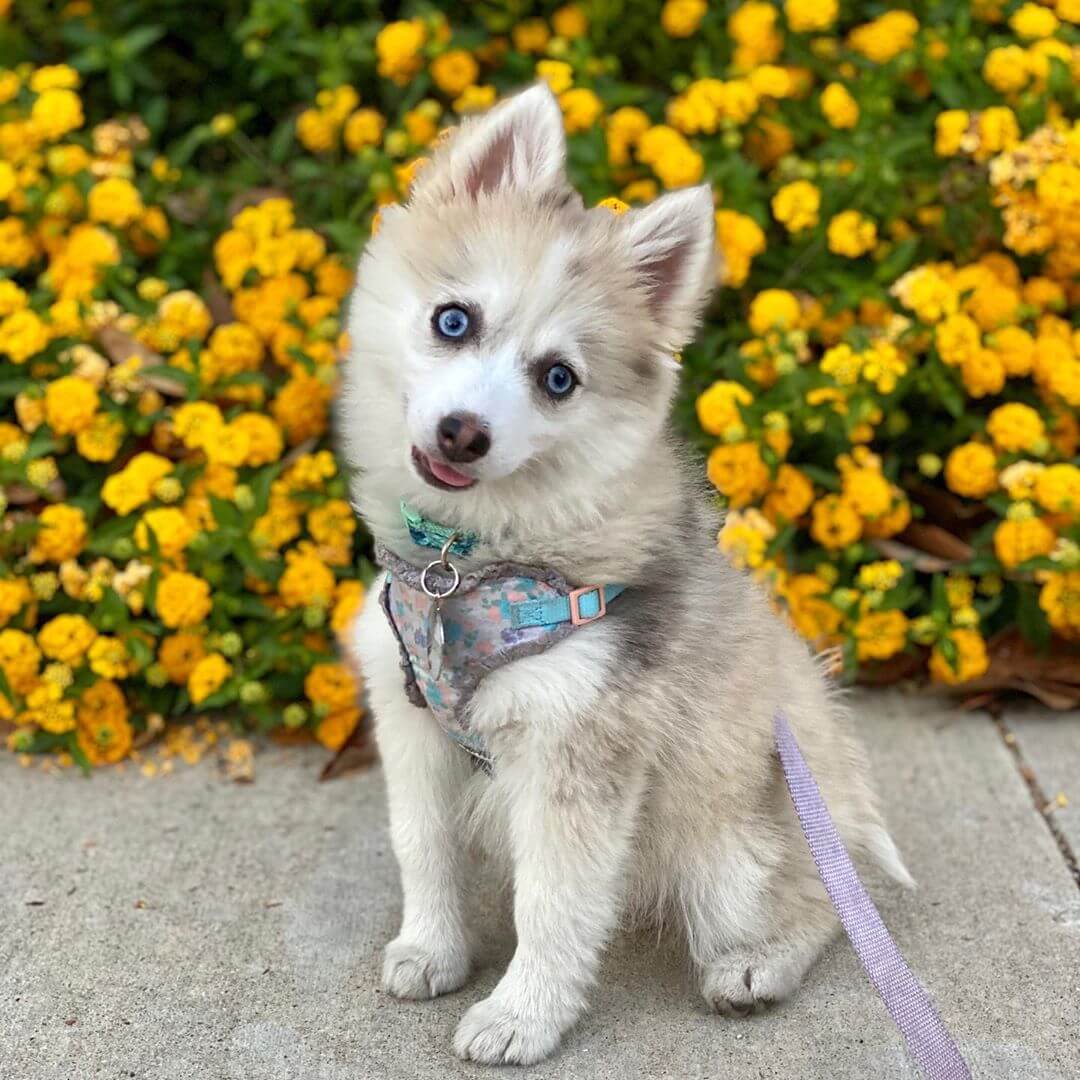 Interspecies hybridization and crossbreeding have been used in dog breeding for a long time. The task of crossing is to obtain new working properties, character traits, or conformation. The resulting offspring combines the traits of a pair of parents or several breeds that participated in the process of breeding a new breed.

Pomsky was specially bred as a cute miniature companion. For this, representatives of the Pomeranian and Siberian huskies were crossed. Small dogs with the characteristic appearance of a husky are often confused with other mestizos of this breed – the Alaskan Klee Kai and the Siberian mini husky.

The first registered information about the Pomsky sounded on the Internet. One of the users under the nickname Tammy contacted veterinarians on Justanswer.com with a question about possible breed diseases and the nature of the mixed orange and husky, which his family planned to take from the shelter. A heated debate immediately flared up on the network about the possibility of the appearance of such a hybrid – after all, the parents of the baby are very different in size.

Hundreds of photographs of this mythical breed began to appear on the network, but none of them showed the Pomsky. However, the idea of ​​creating a rare breed inspired breeders and they began to experiment.

In 2011, the famous husky breeder Teresa Peterson from Burnsville, North Carolina, USA, became interested in the possibility of breeding a new breed, and after 2 years the first litter was obtained. The puppies were officially registered.

Many breeders followed Peterson’s example, and after a while, there was a need for an organization to oversee their activities. So, in 2013, the American Pomsky Club (PCA) was organized, whose task was to maintain the selection at a high level and the desire to achieve recognition of the Pomski as an independent breed with its own standard.

So far, Pomsky is not recognized by cynological societies, and the activities of breeders are supported only by PCA and ASNS – the American club of hybrid dogs.

Description of the Pomsky 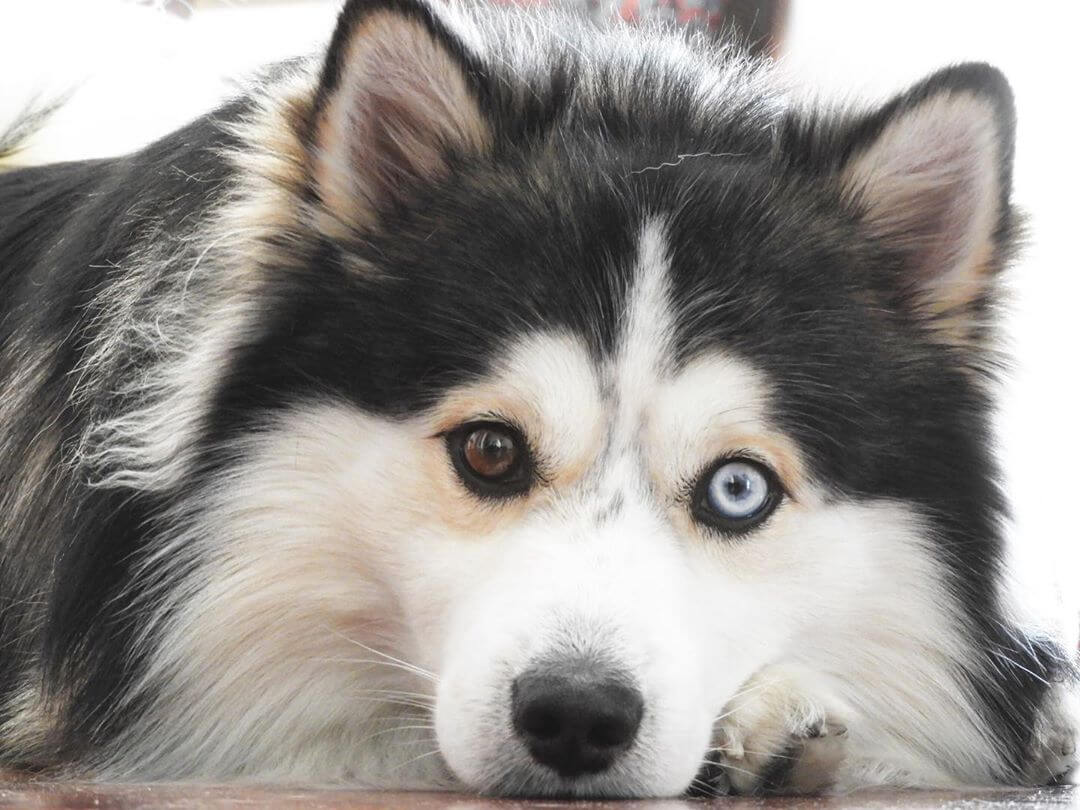 The appearance of hybrids varies, depending on the dominance of the genes of one or another parent. The instability of the exterior is also due to the fact that two purebred parents are involved in the creation of the pom.

As a rule, a Pomeranian dog is chosen for mating, and a husky is a bitch, so that there are no problems with bearing puppies. The hybrid is obtained by artificial insemination. By mixing, the genes of the parents give the traits of the four breeds, which is why it is so difficult to predict the end result.

For convenience, the breeders have divided all the infinite variety of variations of the Pomsky into 5 groups. The first one is a fox Pomsky, and the dog looks like this:

The second group – a plush husky – a doggie has:

The third category includes the white Pomsky, which is considered an extremely rare variety and has the following features:

And the fifth group includes the short-haired Pomsky – a less popular variety, as it looks like a tiny husky with a short dense coat.

The sizes of mestizos also differ. They can be small or quite large. To get an idea of ​​the size of an adult hybrid, you need to divide the sum of the height at the withers of the puppy’s parents in half.

Weight 5-10 kg, height at the withers 30-40 cm. The size depends on the sex of the puppy, the dominant complex of genes of one of the parents. In the first litter, the size of the puppies can be predicted, since the parents are purebred representatives of the breeds. In the second litter, the variability is higher, as the Pomsky F1 (the first litter) participate in mating.

The eyes can also have different colors:

There is heterochromia, in which the color of the iris of the right and left eyes is different, which is often the case in the husky. In case of a partial iris anomaly, specks of a different color are “scattered” over the main color background.

It takes some time for the eyes to reach their final color. Therefore, in nurseries and make a waiting list. The buyer receives photos or videos of the available puppies to select the desired eye color. 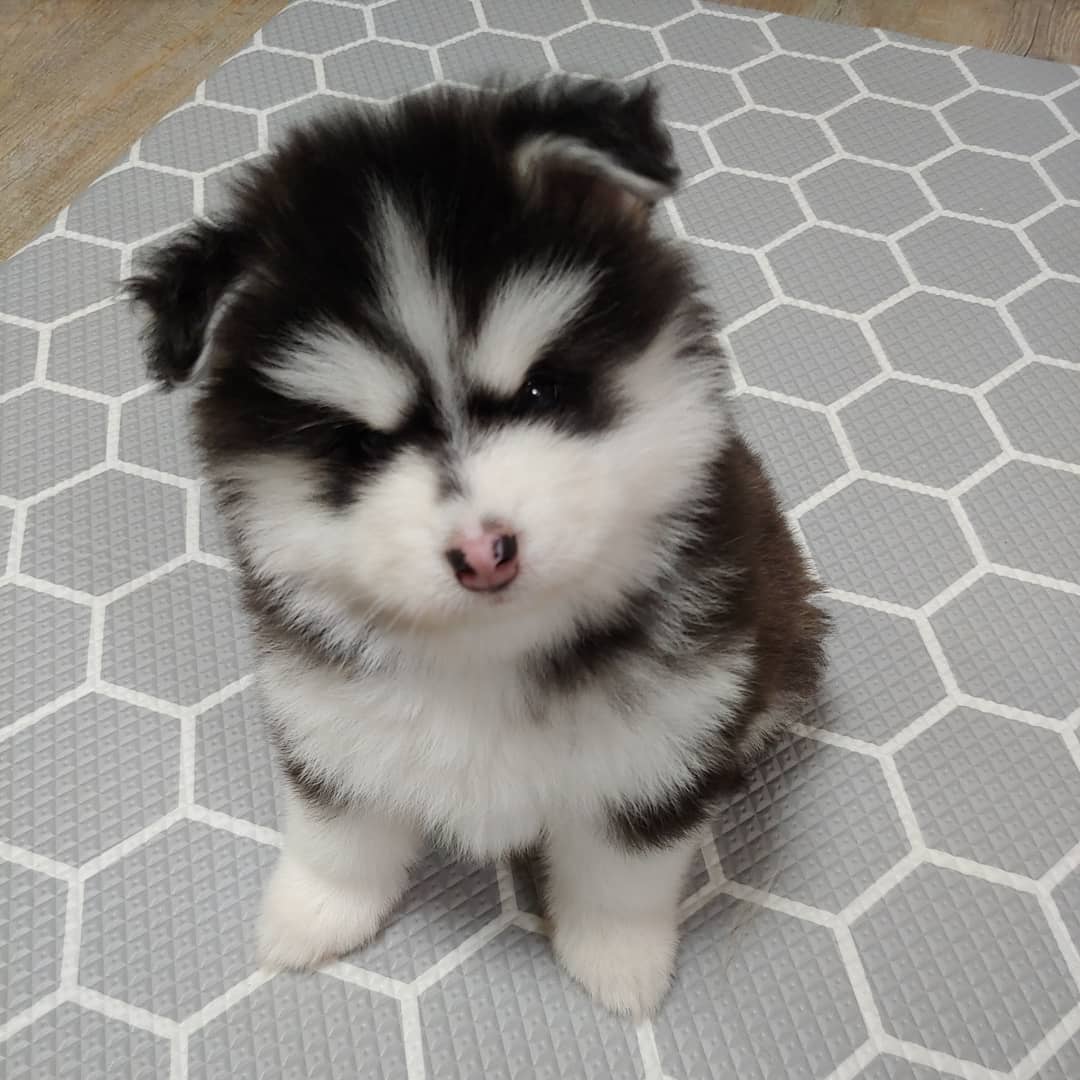 The color of the pom is varied. The most common color is typical for a husky with a mask on the muzzle. The body has:

There are both tan and solid colors. Less often – marble. 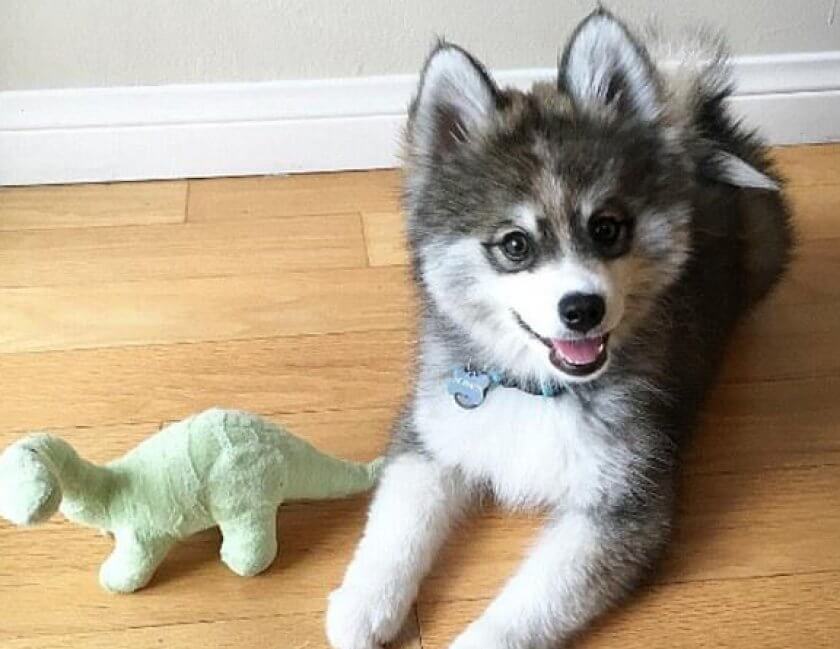 Since the Pomsky does not have established signs, and the breed line is in the process of formation, there are no fixed character traits. The puppy can inherit both the character of the mother and the personality traits of the father.

The energetic, independent, cautious, independent character of the Husky or the dominant, cocky, noisy, but the affectionate, and loyal character of the Pomeranian – it is not known in advance which of them will prevail. But what the Pomsk definitely lacks is aggression. The dog is an excellent companion, ready to be constantly close to the owner. Pomsky boldly rushes to protect the owner, forgetting about his “modest” size.

Dogs are equally likely to inherit both positive and negative character traits – a tendency to escape, a passion for spoiling things, “talkativeness”.

Pomsky gets along well with children and pets, especially grows in their environment. He has a cheerful and sociable disposition, even the loud barking of a dog – a desire to draw the owner’s attention to himself or the situation, and not a sign of aggressiveness.

The dog took over from the Spitz the devotion and love for the owner, but, unlike the orange, the desire to constantly be around is not so strong. Therefore, Pomsky is ideal as a companion for both families with children and singles in need of love and affection.

Pomsky lends themselves well to training, as they have intelligence and ingenuity. But there are also stubborn ones who inherited the independent character of the husky. Pomsky is capable of non-standard solutions, which makes training difficult. In order for the dog to follow the commands accurately and obediently, patience and a benevolent attitude are necessary. Rudeness can spoil the character of the dog – it becomes irritable and withdrawn.

Pomsky is a little psychologist. He feels the emotional state of the owner and, with the ingenuity characteristic of a dog, acts in accordance with it. Therefore, you cannot shout at the dog, especially raise your hand. Although Pomsky’s nervous system is quite stable, he can be offended, become stubborn and uncontrollable.

If the animal is difficult to educate, then you should contact a professional. With a benevolent and persistent upbringing, you can wean the Poms to bark constantly, and react with a voice when necessary or demanding.

Pomsky is not particularly demanding of care. Their thick, soft coat has natural protection from dirt and wetness, so the animal does not need frequent bathing. Poms should be washed no more than once a month using a special shampoo in accordance with the length of the coat. You can entrust this process to the staff of the grooming salon.

In addition to the obligatory care of the ears, eyes, and teeth of the pet, he needs to care for the coat. You need to comb out poms regularly 2-3 times a week, and during the seasonal molting period – daily. Particular attention should be paid to the areas around the muzzle and behind the ears, as long hair there tends to form tangles. Claws need to be trimmed every 2-3 weeks – as they grow.

Mestizos are quite healthy dogs, as they rarely inherit pedigree diseases characteristic of purebred parents. This phenomenon is explained by the effect of heterosis or “hybrid power”.

Breeders pay attention that the formation of tartar is characteristic of poms, so you need to monitor the health of the pet’s oral cavity and regularly clean its teeth. In addition, Pomsky has a predisposition to allergies, and eye diseases are quite possible in older dogs.

The Pomsky is not a “super dog”, so it can get sick, but diseases are usually caused by improper care or maintenance. The dog needs routine vaccinations, deworming, treatment for external parasites, and periodic veterinary examination. On average, Pomsky live from 13 to 15 years.

Pomsky is an active dog, so they need a complete, balanced, energetically rich diet. This can be achieved both with natural nutrition and with appropriate ready-to-eat foods.

With natural nutrition, it is necessary to exclude from the diet:

Pomsky’s diet should contain foods rich in vitamins and microelements. In terms of calorie content, food should be medium, which is regulated by the number of carbohydrates. With natural feeding, it is mandatory to take vitamin and mineral complexes that replenish the daily requirement for minerals.

Dry food makes it easier for pets to feed and does not require additional vitamin intake. The only thing is that when feeding with dry food, the animal must have a sufficient amount of freshwater.

It is recommended to purchase ready-made rations from the premium and super-premium categories. When feeding “drying”, you can diversify the menu with wet canned food with different tastes, but it is advisable to purchase the same brand of wet and dry food.

The small size of decorative dogs allows them to feel comfortable even in a small city apartment. Dogs easily adapt to new surroundings. The dog should have an equipped sleeping place, toys, and a place to eat.

These dogs are not adapted to life on the street, and the owner will hardly keep a rare, expensive dog outside the house. This will be quite enough for the dog, subject to regular and prolonged walking.