Rottweilers are among the dog breeds most often involved in dog attacks and accidents around the world. Notorious for their tendency to bite and snap, they draw a lot of attention on the street. Their fierce exterior and willing nature make them suitable working dogs for public service. After a character test, the social animals can also live in the house as family dogs.

Rottweilers are closely related to the alpine mountain dogs, but they are stronger and their coat is quite different from that of the mountain dogs. In contrast to mastiff-like dogs, the skin lies flat all over the body and there are no wrinkles on the face. With an average height of 61 to 69 cm for males and 56 to 63 cm for females, they are one of the largest dog breeds. Their massive build and powerful, highly visible jaws make them formidable and forbidding.

The Rottweiler from head to tail: A colossus among the shepherd dogs 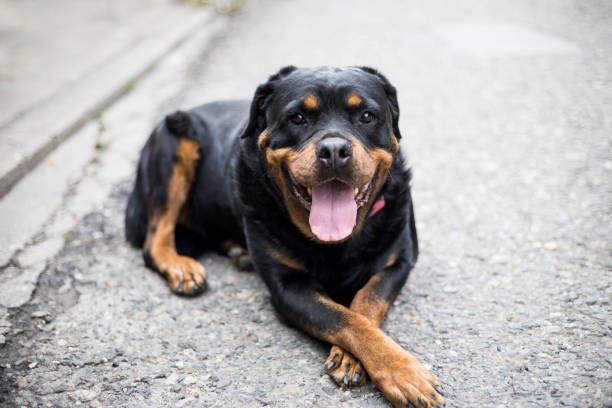 The typical coat color of the Rottweiler

Rottweilers are only bred in one color and have short stock hair – so under the visible black topcoat, there is still a dense undercoat that changes twice a year. The dogs’ tan markings can vary slightly, with the breed standard specifying certain markings such as light dots above the eyebrows and a light tan color on the muzzle.

History: Fitness is in the Blood

Rottweilers hail from the Baden-Württemberg town of Rottweil, which was a center for the European livestock trade in the 18th and 19th centuries. After the introduction of modern breed breeding for dogs, the animals willing to work spread from Rottweil throughout Europe and the USA.

In the second century AD, a large part of today’s Baden-Württemberg belonged to the Roman Empire. On their conquests, the Romans brought with them Molosser-type shepherd dogs, which were bred to the Celtic shepherd dogs of the area. Rottweilers were used for herding cattle and guarding property. They assisted local butchers in slaughtering by restraining large animals, pulling loads, and serving as a deterrent to intruders on farms and stables.

Nature and Character of the Rottweiler: It Depends on the Upbringing

As with all dogs, Rottweiler’s personality development depends in large part on his experiences during the first few months of life. As a herding dog, it is in its nature to defend its territory, its flock, and its family. As a result, he is suspicious of strangers. The males in particular behave dominantly in adulthood and need consistent training by an experienced owner.

Rottweilers in the Family – Can Rottweilers live with babies and toddlers? 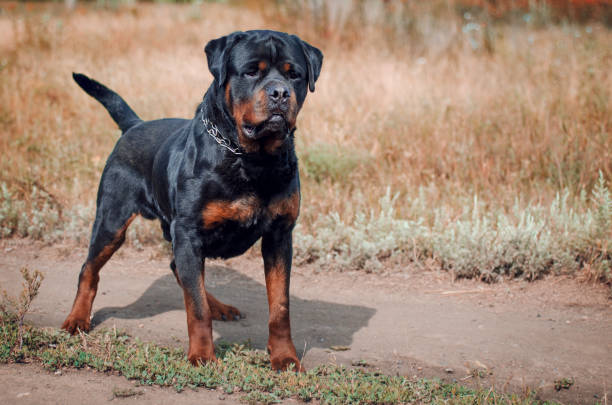 Rottweilers quickly take children in the family to heart and prove to be cautious companions. If a baby is added in the course of the dog’s life, the dog does not have to be given up. Proper training of the dog is also a prerequisite for harmonious coexistence. However, because of their weight and size, the dogs should not be left alone with children without supervision. If strange children come to visit, let the dog relax in another room while the little ones play. You should also not let adult visitors interact with your dog unsupervised so that there are no misunderstandings.

A wide range of properties