The medium Schnauzer represents the archetype of the three different-sized breeds. Giant and miniature schnauzer breeds are based on the genes of this brave hunter of rats, weasels, and waterfowl. In addition, the Schnauzer shows talent as a guard dog and family member. Brisk walks and regular brushing are part of the daily routine.

Contents hide
1 The farmer’s best friend, the hunter’s indispensable companion
2 The nature of the Schnauzer
3 Rearing and keeping the agile super nose
4 Grooming of the Schnauzer
5 Characteristics and health

It is also known as the “Rattler” because the relentless hunt for rats was one of the breeding goals in the 19th century. As a stable dog, the Schnauzer lived in company with the horses and killed every rodent. His all-around talent ensured lasting success. Because intelligence, trainability, and almost unshakable robustness opened the hearts of the family to the loyal animal next to the stable door and the position as a hunting helper.

The nature of the Schnauzer

Looking for a family member? Found! Hardly any breed combines a lively temperament with circumspect action and affectionate devotion as wonderfully as the Schnauzer. Playful and agile, loyal and loyal, alert and incorruptible – the Schnauzer will prove itself as a family dog ​​in your life. He loves going for walks together as well as romping around with your children. Here he shows himself to be overly cautious and tolerant. Thanks to its medium size, it can definitely live in the apartment if it is used to capacity. Your neighbors will rarely hear barking. His attachment to people qualifies the smart bearded dog as the perfect companion and family dog. 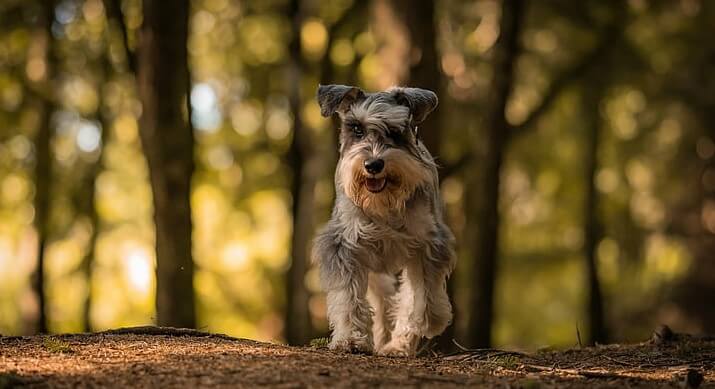 Even puppies demonstrate the social compatibility with humans and animals that Schnauzers are born with. Training and bonding are easy if you take advantage of both their active needs and their intelligence. This works successfully in dog sports, among other things. The Schnauzer only heads for the basket when the work is done. The alternation between lively temperament and deliberate calm is typical of the breed. He is very affectionate and loves to play with children. His alertness comes without barking. Highly developed nose, ears, and eyes are constantly in use and prove to be the cornerstones of his attention.

Grooming of the Schnauzer

Your local vacuum cleaner will be happy – Schnauzers only lose a few hairs. The typical trademark, the mustache, is perfectly staged and gives it its unmistakable appearance. The dog has a double coat that makes it resilient in the great outdoors. The rough topcoat is overlaid with a soft, short undercoat. This combination calls for daily brushing and regular trimming. The schnauzer enjoys both if he gets used to the procedure early on.

Schnauzers are prone to hip dysplasia (HD). This is a malformation of the acetabulum that makes it impossible for the otherwise robust dog to move without pain. Therefore, when purchasing, make sure that you have certified HD-free breeding.