Cats are special: there are probably no two kitties with the same character. This poses a problem for professional can openers: the cat needs a name that is as unique as the beloved house tiger itself. We have a few ideas.

If you think of cat names, you will probably think of some common names. However, some creativity is required. The name should correspond to the personality of the animal and also be short and concise so that the kitten can easily remember it. Above all, however, it has to suit the animal, because the kitten will carry it for a lifetime. If you already have a cat, a name must be found that is clearly different from the existing pet.

Molly, Muschi, or Mimi are not only common cat names, they also have one thing in common. Experience has shown that cats can memorize two-syllable names that have at least one light vowel.

If the whole family takes care of the new pet, they should also be involved in finding a name. So that everyone agrees with the new name, it makes sense to vote together. The choice is guaranteed not to be easy. Here are our suggested names for male and female cats.

Best Male Names for Your Cats

A bandit is a robber and a thief. Bandit is often used as an animal name for cheeky four-legged friends. This name is excellent for a little robber who explores the world with curiosity and alertness and who has advanced to become an avid mouse-catcher.

Benji is derived from Benjamin and stands for “son of happiness”. The name became known mainly with dogs, as a mixed breed dog named Benji became a crowd favorite in various films. The name is suitable for male cats of all races and is short and memorable.

Actually, Billy is a diminutive of the name Sibylle and comes from ancient Greek. Sibylle stands for prophetess or seer. Billy is increasingly used as a male first name. One example is the singer Billy Idol.

You probably know the brownie as a traditional American chocolate biscuit. The term can be used for both male and female cats with brown coats. Brownie was once one of the richest cats in the world. Its owner, who died in 1963, bequeathed the animal $ 415,000.

Eddy is the pet form of Eduard, Edgar, and Edmond. The equivalent is Protector of property. As experience shows that cats are less suitable as watchdogs, Eddy is ideal for chubby cats with a cuddle factor. Eddie can also use it. Edi and Edy are suitable as pet forms.

The name Einstein goes back to the world-famous physicist Albert Einstein, who to this day is considered the epitome of genius, although, as is well known, he also had his weaknesses. If you have big plans with your cat or just want to poke fun at the story, this name is the right choice.

The name was probably derived from the old English term “al-vis” for “wise” and “omniscient”. The rock’n’roll legend Elvis Presley is far more familiar to us. The name goes well with sturdy and cozy four-legged friends who like to be pampered by their can openers.

Felix is ​​the Latin equivalent for “happy” or “fortunate”. Certainly, your kitten was lucky enough to end up with you of all people. Based on a well-known brand of cat food, black and white tom cats are often called Felix.

Garfield made the comic series of the same name famous. The hangover is known to all of us as lazy, cheeky, and hungry. Somewhat chubby and red tabby tomcats also look like the comic hero.

Goofy comes from the English vocabulary and means silly and silly. As a companion to Mickey Mouse, the dog Goofy is one of the most famous Disney characters. This name is best for cozy and slightly clumsy cats.

Not only Howard Carpendale fans should think about this cat name. Howie was the name of a brave Persian cat who traveled 1,600 kilometers in the Australian outback to find her family.

Lucky in English means happy and happy. The name suits happy, lively, and curious cats who often make you laugh. They are often used based on the cartoon character Lucky Luke.

This name comes from Finnish and stands for “snow”. A modification of “lumen”, the Latin term for “light”, is also possible. Lumi goes well with white cats or kittens with a noticeable white patch in their fur, a white tip of their tail, or similar fur colors.

Michel is a form of Michael. The name comes from Hebrew and can be translated as “Who is like God?” translate. Inquisitive and cheeky kittens are named after the rascal from Lönneberga, who lured generations of children in front of the television screen.

This name comes from the old Slavic vocabulary and stands for “love”. In addition, certain birds of prey are known as kites. The name suits lovable and cuddly cats but also indicates that there is a small predator hidden in every cat.

Mowgli is a literary term found by the author of the jungle book. In the language of the forest, Mowgli means “frog”. Mowgli is a nice nickname for small and rather plump tomcats.

Romeo comes from the Latin word “romaeus” for “Roman”. Closer is the thought of the most famous lovers in literary history. Handsome and potent tomcats who like to look for a bride have earned this name.

Sammy represents the pet form of Samuel. The name comes from Hebrew and means: the one asked of God. Sammy can also be abbreviated as Sam or pronounced as Samuel when the cat is reprimanded and urged to be reasonable. Sammy goes well with cuddly and somewhat plump cats of the Persian or British Shorthair breeds.

Sunny is the English name for cheerful and sunny. A kitten brings sunshine into the house and therefore the name actually fits all tomcats. As an animal name, Sunny gained fame through Barack Obama. The former US president’s second female bears this name.

Tom is a classic among cat names and is chosen based not least on the famous cartoon tomcat. Tom stands for a brave tomcat who won’t stop at anything, but who doesn’t hide his gentle side either. A tomcat with this name has made what is probably the longest documented cat trip and crossed the United States from Florida to California over a length of 4,000 kilometers. 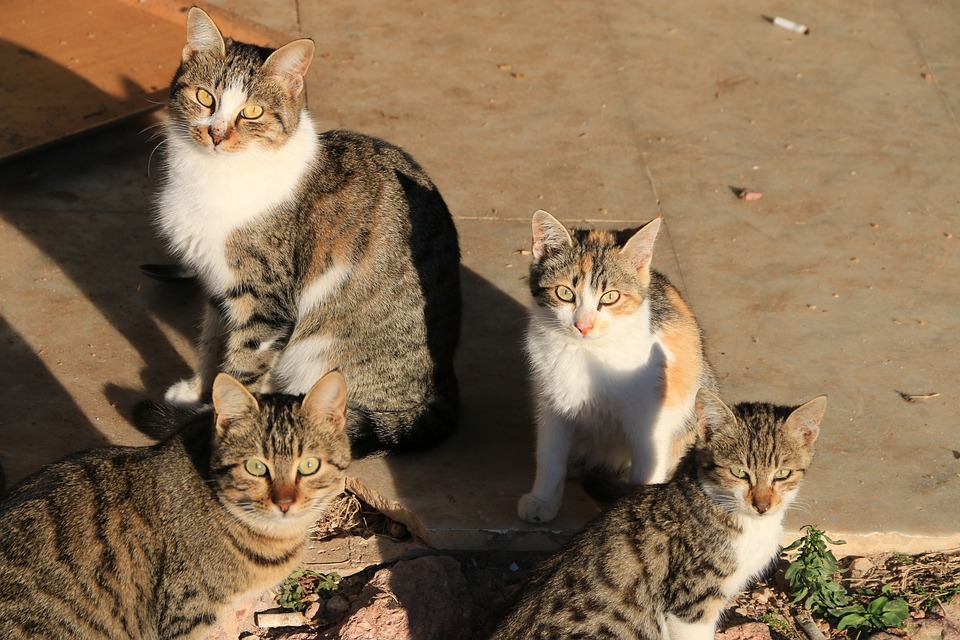 Aliya is Arabic and can be derived from “alia”. This means “the high one” or “the exalted”. A derivation from the Hebrew word “aliyah” for “ascent to Jerusalem” is also possible. The name is particularly sonorous and suits proud and dignified cats that gracefully climb up – even if only on the domestic scratching post.

Amy can be derived from the Latin equivalent of “amare” for “like to have”. This name fits every cat that wrapped our fingers around us at first sight and with whom we immediately fell in love.

The name Ashantie has different meanings. While in Africa it is used to describe a tall and strong woman, in Indian it stands for “restless”. Both equivalents are combined in a large and stately cat that loves its freedom and likes to go hunting.

The word origin of this name is in ancient Greek “kleos”, which means something like fame. Cleo is also considered the short form of Cleopatra. The name suits little kittens who want to become a proud diva one day.

In Indian, Lakota means friend and ally. The name is recommended for animal lovers who want a rather unusual name for their cat and who want to address the special relationship between humans and animals.

Lucy is of Latin origin and was modified by Lucia. The translation is the shining one. Other possible spellings are Lucie or Luzie. The name suits cats of all breeds and coat colors.

Luna stands for the moon in Latin as well as in Italian. The Romans called their moon goddess Luna. Harry Potter fans might want to give their cat this name based on Luna Lovegood.

The short form of Maria comes from Egyptian. The meaning of the word is not clearly clarified. Interpretations such as “the fertile” or “the beloved” are possible. Since fur noses are always good for a surprise, this cat name is spot on.

The name comes from ancient Greek and is short for Melissa. Translated into German, Melissa stands for “bee”. The name fits “honey-sweet” kittens of all races and coat colors.

Nala stands for “lioness” in Swahili. Nala and Simba are simply inseparable in the Disney classic “The Lion King”. Perhaps a second cat will come into the house, which Simba is eagerly awaiting.

Nicki is short for Nicole and comes from ancient Greek. The German equivalent is: winner of the people. Variations such as Nici, Nikki or Nicky are possible. Cat owners in southern Germany may primarily think of the singer of the same name from Lower Bavaria.

The name comes from Old High German and is modified from Oda. Oda or Odette are other common forms. Odina can be translated as “the owner” and can remember who the real mistress is in the house and how cats subjugate their can openers every day.

Selima is the appropriate name for a tiger cat and a two-legged friend who is enthusiastic about literature and word games. Selima lived with the English writer Horace Walpole. When he went on an educational journey in the middle of the 18th century, the animal drowned in a goldfish bowl. We owe the expression to a poem that was written in memory of Selima: “All that glitters is not gold”.

Sheba was an ancient kingdom that was located in what is now Yemen. A derivation from Sheeba, a Hebrew woman’s name, is also possible. The name is not only suitable for Carthusian cats who particularly like the food of the same name.

Sissi is of Hebrew origin and a short form of Elisabeth. The name can be translated as: the one sanctified by God. Empress Elisabeth of Austria is most often associated with this name, not least because of the annual repetitions of the TV trilogy of the same name. For tender and sensitive kittens, Sissi is a worthy match.

This name is suitable for cats with a butterfly-like flow, a tabby drawing. The pet form of Tabitha stands for “deer” or “gazelle”.

Yola is the short form of Yolanda. The ancient Greek equivalent of the name stands for “violet”. Following the symbolic character, modest and virgin cats should bear the name Yola. The short and memorable name also goes very well with curious and intelligent cats.

In Japan, people use Yumi to refer to everything beautiful. All cats are little beauties. Therefore, the name fits every kitten perfectly.

In ancient Greek, Zoey means “life”. The name can also be written Zoe or Zooey and suits all cats that turn their owners’ lives upside down and bring hustle and bustle into the house.

Zora is an Old Slavic name that means dawn or dawn. The name is also often associated with the film adaptation of the youth novel “The Red Zora and Her Gang”. Zora is the apt name choice for adventurous kittens with red fur.