The Tibetan Terrier is a family-oriented breed, friendly and playful, extremely attached to its members. Being with family is very important for the Tibetan Terrier and he wants to take part in all her endeavors. Despite the name, this breed has nothing to do with the group of terriers and is named so by Europeans for some similarity. 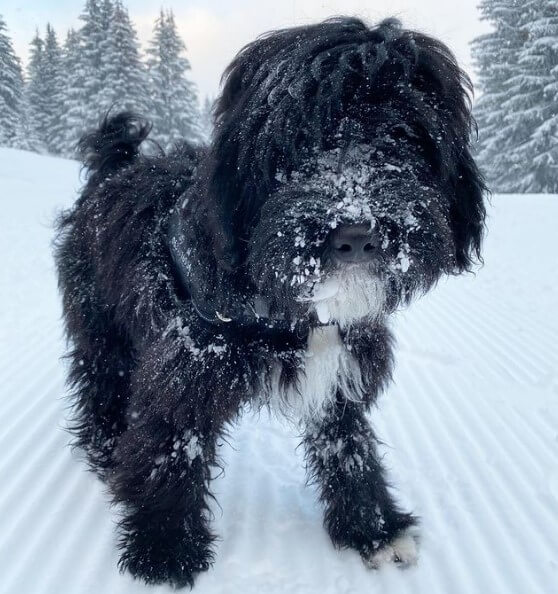 History of the Tibetan Terrier Breed 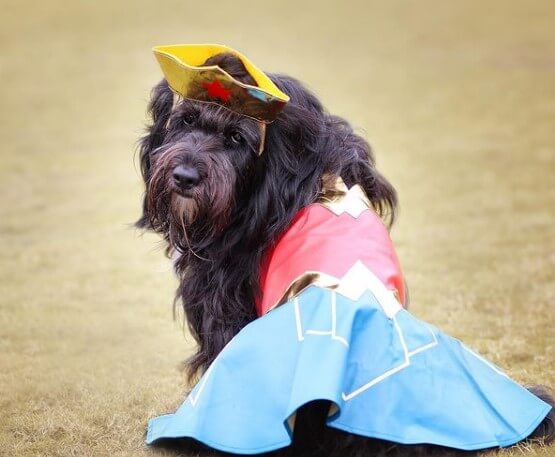 The Tibetan Terrier has a very long history dating back at least 2000 years. This is what the written records tell about, as well as legends passed down from generation to generation. In Tibet, these dogs are very fond and they are on a special account, they could not be sold and generally taken out of the country for many centuries, due to which the ideal purity of the breed was preserved.

Throughout their long history, they have performed a variety of functions, being watchmen, shepherds, faithful companions, and – talismans, because people in Tibet still believe that this dog brings good luck. In addition, the Tibetan Terrier helped people find objects lost in the mountains.

The Western world saw these dogs thanks to a successful operation performed by Dr. Greig, an Englishman by birth. He was presented with a female, and a little later he persuaded someone to sell him a male as well. After taking both of them to England, he created his own breeding program for these dogs in his homeland. We can say that almost all modern representatives of this breed, which you can see in Europe, America, England, and other countries, come from Dr. Greig’s nursery.

The Tibetan Terrier has left a genetic mark on many breeds, including:

First, they were given the name Lhasa Terrier (in 1924, when the first puppies were born), however, then the Kennel Club of India changed the name of the breed to Tibetan Terrier. Today these dogs are considered rare. 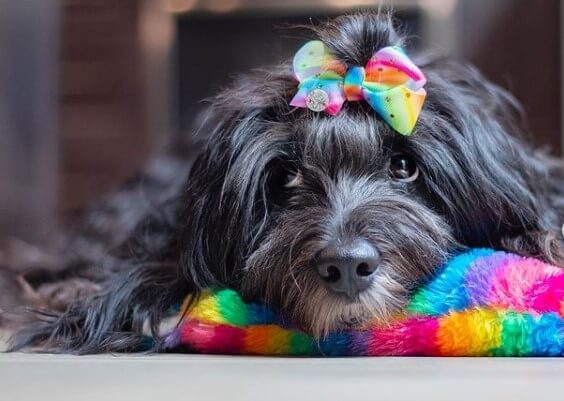 The Tibetan Terrier is a powerful dog regardless of gender. The physique is square, muscular, her type can be compared to a heavyweight. The Tibetan Terrier is proportional, with a medium-sized head, a long back, and a straight croup. The ears of this breed are V-shaped, drooping, the eyes are set deep and wide, they are practically invisible behind the coat.

Long hair covers the entire surface of the body. Tibetan Terrier tail thick, firmly set. It should be placed high, almost supine, and long hair at the tip. Minor tail breaks are allowed. The general appearance of the Tibetan Terriers resembles the Old English Sheepdogs in miniature. 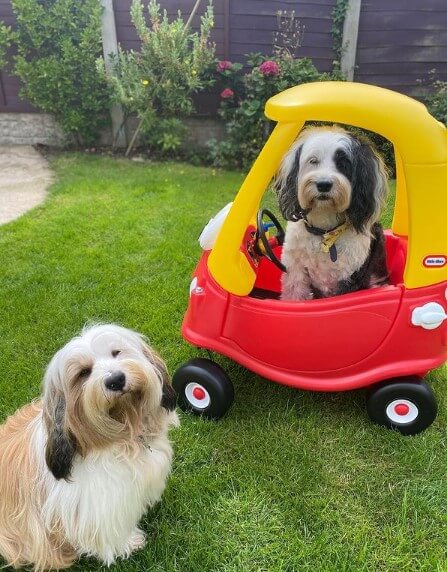 The Tibetan Terrier breed has a wonderful character, which, obviously, has always been so. Since the breeders who brought the dogs to England did not care about the development of temperament and noted that they were extremely cute, affectionate, and kind dogs. Their friendliness extends to each of the family members, to family friends, and in general to all people who are on good terms with their owners.

At the same time, the breed is smart enough to clearly define the boundaries, despite its disposition towards people in general. Moreover, if she is in the courtyard of a private house, and realizes herself as a watchman – in this case, the dog will bark at strangers passing by. However, today, no one uses them as watchmen in the Western world, this is a fact. Basically, pets play the role of companions and perform well in this capacity.

They treat children well, regardless of age. Although, with children under the age of four, who mostly make a lot of noise and screaming, and still do not know how to control their behavior with animals well enough, problems can be. Moreover, the dog has its own limit of patience, has a small size, which is why a child can inadvertently harm it and cause an acute reaction.

The Tibetan Terrier has a high level of energy, needs long walks, and games with elements of training. Can get along well with cats, but is best done at an early age. They have developed intellect, they perfectly understand a person, sometimes they can be stubborn, but there is no need to try to overrule or break the dog. You just need to be able to be the leader of your pack, a wise and kind owner for your pet. 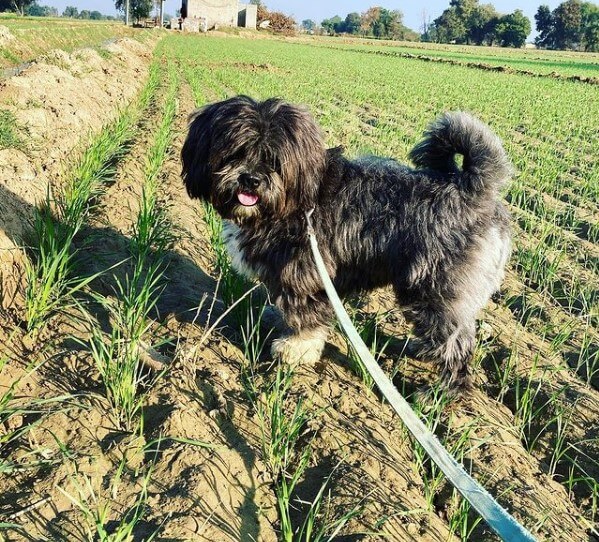 To raise an obedient, intelligent dog, the Tibetan Terrier must be trained from puppyhood. At the same time, the owner will need firmness of character and confidence in his righteousness, because the puppies of these Terriers are very restless, and it is not easy to make them obey.

Tibetan Terrier obeys only those people who are respected. At the same time, they are very quick-witted, they remember a lot of words and phrases, the only thing is that they will need to do several dozen repetitions in order to fix the command. Tibetan Terriers have the instincts of a shepherd and a hunter, do not let go of your pet from the leash if you are not sure of it. 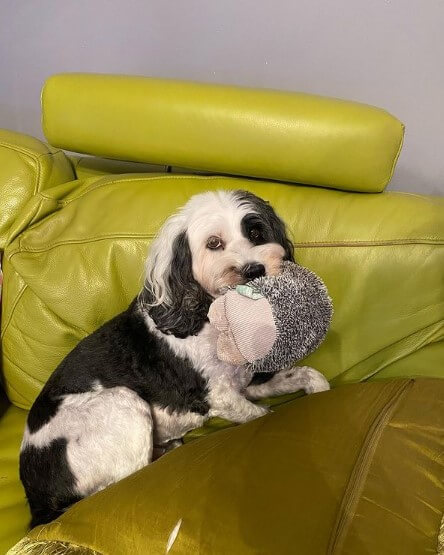 The Tibetan Terrier is very adaptable – this is one of the main characteristics of this breed. If you live in a private house or apartment, your dog will feel itself everywhere with sufficient mobility. Note that he needs to be outside at least twice a day and walk for at least an hour. You can keep the Tibetan Terrier with animals, but sometimes conflicts arise between the Terrier and other pets – he is very jealous. 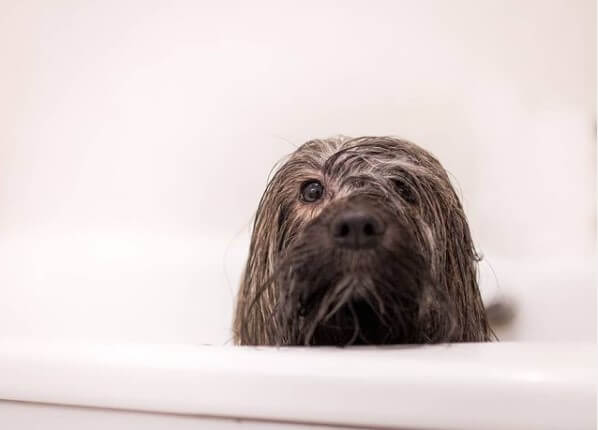 A magnificent dog with a luxurious coat, the Tibetan Terrier needs a lot of grooming to maintain its flamboyant appearance. Plan to brush your dog daily or every two days.

During its life, it goes through different stages of development, in some of them, it sheds intensively.

The properties of the coat are such that it picks up all the debris and dirt, so dogs have to be washed quite often. Particular attention should be paid to the hair on the pads and ears so that it does not interfere with the animal.

Despite the fact that the Tibetan Terrier needs more care than other breeds, this is compensated by the fact that they shed very little. They are well suited for people suffering from dog hair allergies.

The ears of Tibetan Terriers are drooping, but dirt gets into them all the time because these dogs love to run. To avoid otitis media, trim your ears and brush them once a week. To do this, adjust a cotton pad or cotton swab dipped in a weak solution of peroxide. The eyes of small Tibetan Terrier puppies water almost constantly. This is not scary – the fact is that the hair of babies is just beginning to grow back and because of this it constantly gets into the eyes. In older dogs, this effect disappears, and the eyes return to normal. Taking care of the eyes of the Tibetan Terrier is simple – it is enough to wipe them from time to time with a cotton swab dipped in warm water.

Tibetan Terriers are prone to tartar formation and, as a result, caries. To keep the dentition in order, buy a special bone collet – it will chew on it, and the plaque will be cleaned off by itself. You can brush your dog’s teeth yourself with a regular toothbrush without paste if plaque has already formed.

If the dog walks a lot in nature, its claws grind off themselves. Pets need to trim their nails. To do this, use a nail clipper and nail file. Be careful – the claw grows back along with the blood vessel and nerve. If the nails are already long, do not cut them off entirely, but shorten them gradually, two to three millimeters per week. So the blood vessel with the nerve will gradually go deep into the claw. Be sure to sand the cut so that the dog does not harm you or himself. 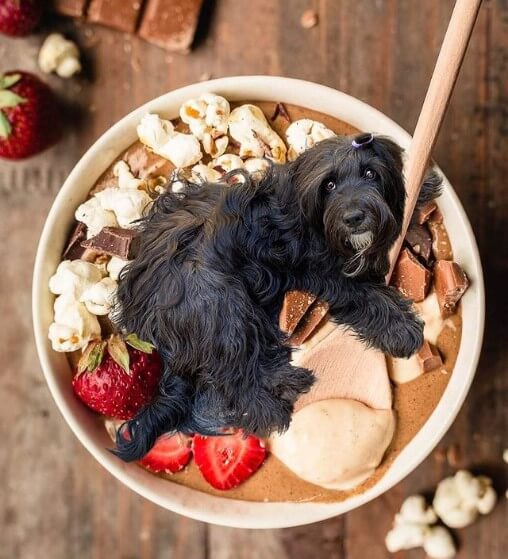 The Tibetan Terrier diet should be based on good meat not purchased from the market, certified to prevent parasite infestation. The food should be varied – in addition to meat, give the dog a fish, boiled poultry, dairy products, cereals, and vegetables. Be sure to introduce fresh fruit and be guided by the taste of your pet. Cookies, chocolate, candy, spices, and alcohol are prohibited. Puppies need to be fed often (seven to eight times a day), but not enough. Adult dogs eat less often and the portions increase accordingly. 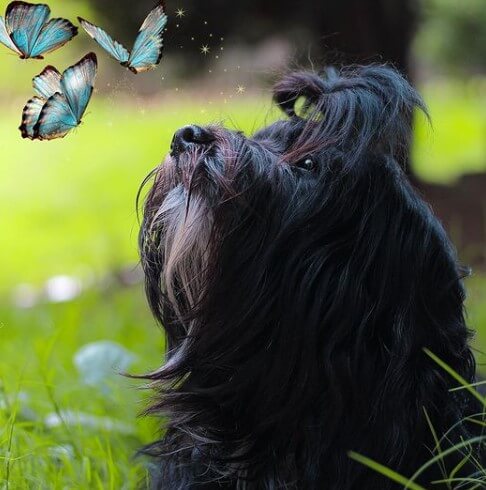 The Tibetan Terrier has health problems that may include: 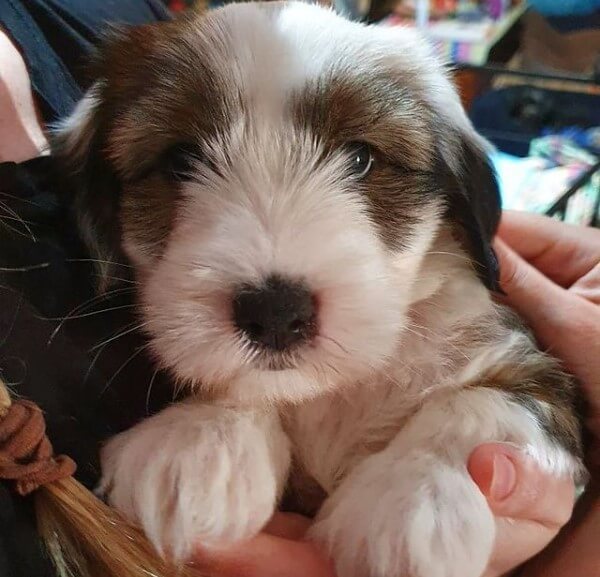 If you are planning to buy a puppy for show or breeding work, contact certified kennels or exhibitions. There you will find a healthy good dog with a pedigree and other documents.

When buying a Tibetan Terrier, first of all, pay attention to its temperament and character – how much they correspond to the description of the breed. A hyperactive dog will destroy your home, but a cowardly one will not be able to protect you. Always watch the puppy in the room in which he grew up – these conditions are familiar to him.

Take a closer look at those who go into the hands. Ask the owner of the kennel about each particular dog, he will tell you if they have congenital defects, advise the one that is right for you, and will guide you on prices. To determine your choice, examine as many dogs as possible – the wider the search circle, the higher the probability of choosing the best dog.